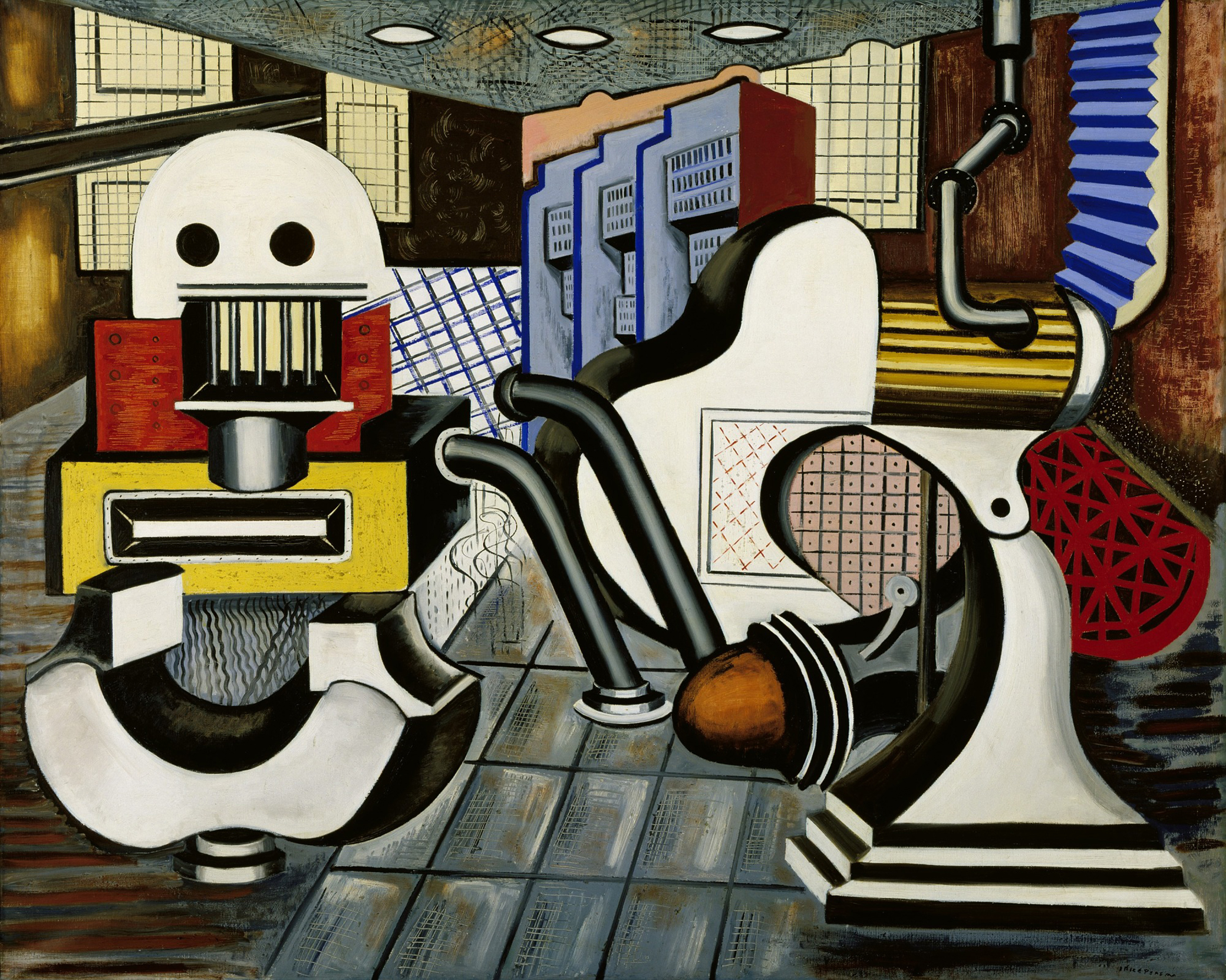 Why are gimmicks often comically irritating? The very sound of the word seems to grate on popular philologist Ivor Brown, who nonetheless gives it a full entry in 1958’s Words in Our Time: “Comedians have their gimmicks, either as catchphrase, theme song, or bit of ‘business,’ which they exploit in…their appearances.” Gimmicks seem to provoke contempt simply because they are job-related: mere tools that have a strange way of stealing attention. In addition to being what Brown calls a “poor kind of artifice,” the gimmick irritates because it “abbreviates” work and time.

Repulsive if also strangely attractive, with a layer of charm we find ourselves forced to grudgingly acknowledge, labor and time-saving gimmicks are of course not exclusive to comedy. We find them in shoes and cars, appliances and food, politics and advertising, journalism and pedagogy, and virtually every object made and sold in the capitalist system.

But comedy, and especially what the writer David Flusfeder calls the “comedy of procedure,” has a unique way of bringing out the gimmick’s aesthetic features in explicit linkage to its status as a practical device. The invitation to visualize causality becomes especially noticeable in films featuring a “device gag” or “apparatus”: the sausage machine in which animals herded into one end come out as links from the other; or the webs of string with which children join wigs, chairs, fishbowls, blankets, and other commodities to unsuspecting adults who thus become parts of an elaborate “connection device”—one which the living beings absorbed into it cannot fully see.

With this image of an apparatus binding agents who otherwise seem to be acting independently—connecting them “behind their backs,” as Karl Marx likes to say—we may begin to suspect that the gimmick, like the comedy of procedure that puts it so ostentatiously on display, is a phenomenon distinctive to a specific mode of production and not just “modernity.” The gimmick is an entirely capitalist aesthetic.

To be sure, there are marvelous devices centuries before these economic developments that we might be tempted to call gimmicks today. Describing the “mechanical apparatuses, restored and painted by Melchior Broederlam, that sprayed the guests of Philip the Good with water and dust,” philosopher Giorgio Agamben writes that prior to the seventeenth century European sensibility did not recognize a significant difference between “works of sacred art” and elaborate contraptions such as those in the castle of Hesdin, where “in a hall decorated with a series of paintings representing the story of Jason, a series of machines was installed which, in addition to imitating Medea’s spells, produced lightning, thunder, snow, and rain, to obtain a more realistic effect.” Gimmicky as we might think them now, these devices made no particular claim to abbreviating work on which they could henceforth renege. More significantly, they were objects of admiration unmixed with suspicion or contempt. It is only today that the deus ex machina, the machine or crane used to transport gods to the stage in ancient Greek tragedy, has become the name for a “cheap” or aesthetically unconvincing contrivance for achieving narrative closure. 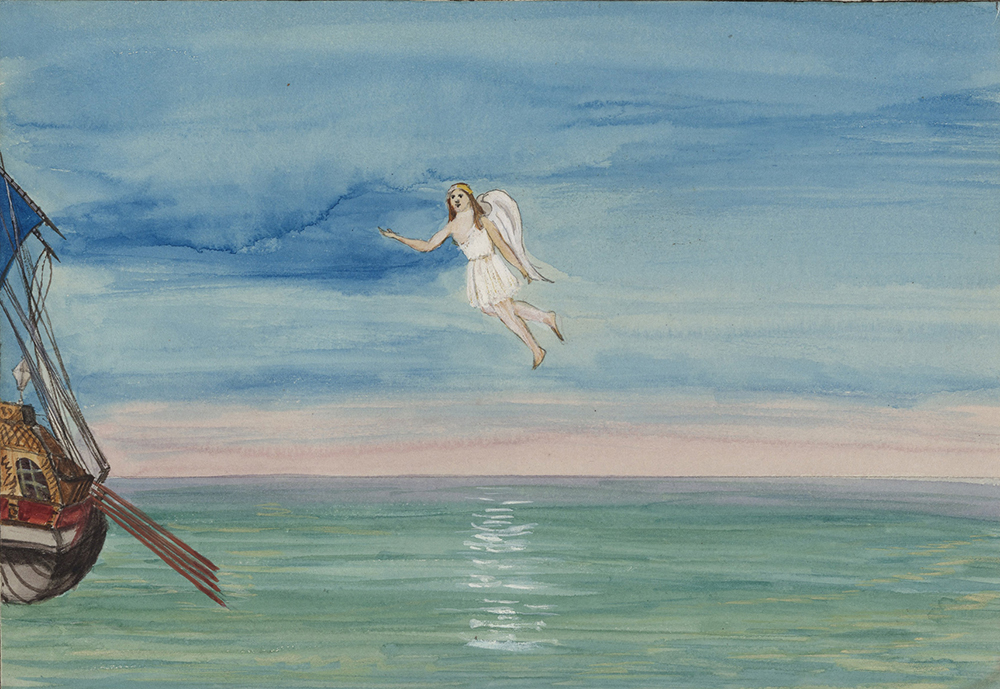 Devices like these were wonders, not in any way equivocal or “funny” to their ancient and feudal contemporaries. The capitalist gimmick, however, is both a wonder and a trick. It is a form we marvel at and distrust, admire and disdain.

Calling something a gimmick is a distancing judgment, a way to ward off the trick’s attractions by proclaiming ourselves unconvinced by them. At the same time the gimmick enables us to indirectly acknowledge this power to enchant, as one to which others, if not ourselves, are susceptible. In this elliptical fashion, the gimmick can be found amusing or even cute; indeed, it often takes the form of a miniaturized machine. Yet it is our feeling of suspicion, followed closely by contempt, that defines the aesthetic judgment / experience of the gimmick as such. A device cannot be a gimmick—it would just be a device—without this moment of distrust or aversion, which seems to respond directly to or even correct our initial euphoria in the image of something promising to lessen collective toil. This is again what separates the gimmick proper from ancient or feudal machines that make work more efficient, because the compound crank or water mill’s promise of decreasing labor does not elicit feelings of fraudulence. Always enchanting and repulsive at once, and never simply one or the other, the gimmick is one of capitalism’s “sad marvels.” 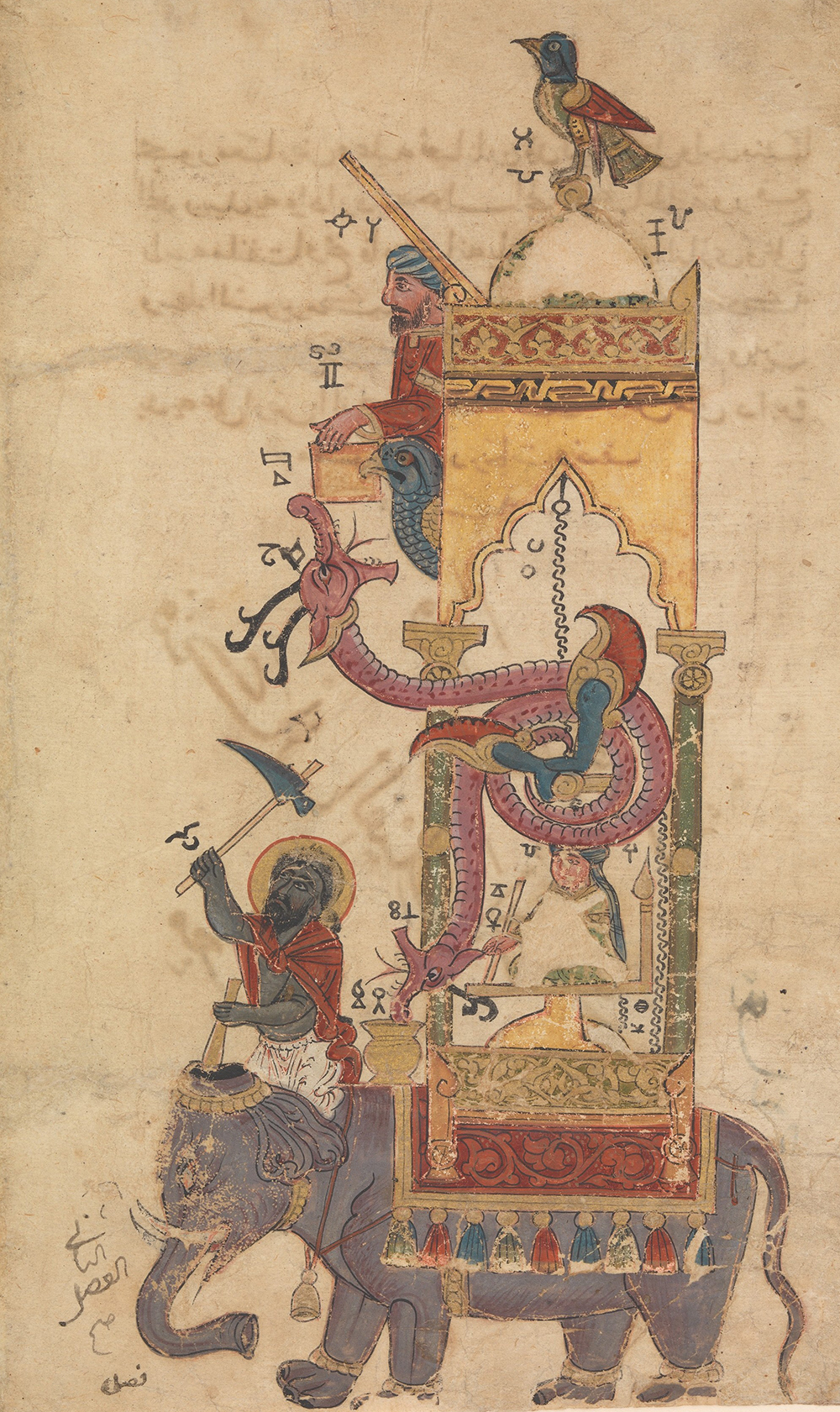 This ambiguity comes forth most strongly in the aspect of the gimmick that irritates and charms us the most: the way in which it seems to work both too hard and too little. The self-described “inventions” of former vaudevillian and mining engineer Rube Goldberg, explorations in his own words of “man’s capacity for exerting maximum effort to accomplish minimal results,” highlight this contradiction in a memorably comedic fashion. In these tongue-in-cheek designs for fictional machines, first appearing as newspaper cartoons in the early twentieth century and living on today in examples ranging from engineering contests to Peter Fischli and David Weiss’ art film The Way Things Go (1987), a stunning variety of inanimate devices are combined with animal or human agents in painstakingly elaborate ways, if also in ultimately simple chains of linear cause and effect, to perform anticlimactically ordinary tasks: emptying ashtrays, buttoning a collar, sharpening a pencil. Reminiscent of the gag film’s “connection device,” the Rube Goldberg perfectly captures what the gimmick does to achieve its intended effect, which seems at once excessively laborious but also strangely too easy. This is why we can refer to it both admiringly as a laborsaving “trick” and also disparagingly as a labor-avoiding “dodge.”

Mirrored in this appearance of doing too much and yet also not enough work, the equivocal saving of labor that the gimmick encodes is the main reason for why it attracts and repels us. Because the capitalist seeks state-of-the-art machinery at costs lower than those at which new technologies are introduced, his mode of production requires a constant negotiation with the social aging of productive devices. If we speak of outdated equipment as underperforming, below a standard of productivity continually reset at higher levels, expensive new technology adopted too early might be described as overperforming, well above standard but crucially unprofitably.

In twentieth-century engineering manuals and popular science magazines, we see the term used as technical slang to refer to the working part, often a unit enclosing or comprised of many smaller parts, of a larger machine. Here gimmick seems descriptive instead of evaluative—a generic term, like gadget, thingamabob, or doohickey, for any functional device. Yet it is this explicitly industrial as opposed to aesthetic version of the labor-saving gimmick that best reflects the way some early twentieth-century aesthetic theorists regard comedy.

In a way that might explain why the conceptual artwork remains such a prominent stereotype of a gimmicky artifact, in capitalist culture idea and gimmick often become synonymous. We see this slippage in the Oxford English Dictionary’s definition:

gimmick, n. A gadget; spec. a contrivance for dishonestly regulating a gambling game, or an article used in a conjuring trick; now usu. a tricky or ingenious device, gadget, idea, etc., esp. one adopted for the purpose of attracting attention or publicity.

We are given a detailed demonstration of how the “classic” version of the gimmick works in “The Glory Machine” by symbolist writer Villiers de l’Isle-Adam. The device at the heart of this late nineteenth-century story, narrated in the blustery tone of a market still closely aligned with theater, is a “machine” for insuring French playwrights against ruin by guaranteeing that their aesthetic productions will be met with an unequivocally positive response. “In the future, [such] risks will be completely ruled out.” The punch line of Villiers’ laying bare of the gimmick form—the story’s meta-gimmick, if you like—is that the “sublime mechanism” for generating “Glory” proves to be nothing other than the physical building of the theater.

We quickly discover that the Machine is not a scientifically advanced marvel difficult to understand but just an ordinary amphitheater modified with hundreds of mechanical devices and controlled by a hidden operator on a giant keyboard for generating a simulation of collective aesthetic pleasure. Even more than the theatrical production for which it is simultaneously produced as both a response and a work to be aesthetically consumed in its own right, the artificial reception is an elaborately orchestrated Gesamtkunstwerk. In addition to “laughing and lachrymatory gases” pumped out at the appropriate moments from pipes, automated cane ends to thump on floors, and the installation under every seat of a folded “pair of very shapely hands, in oak” (the narrator archly notes, “It would be superfluous here to indicate their function”), its devices include “tiny bellows…operated by electricity” placed in “phonographic machines” hidden in the mouths of the proscenium cupids. At appropriate moments these phonographic machines play the prerecorded sounds of aesthetic reactions—“Bellowings, Chokings, ‘Encores,’ Recalls, Silent Tears, Recalls-with-Bellowings-extra, Sighs of Approbation, Opinions Proffered, Wreaths, Principles, Convictions, Moral Tendencies, Epileptic Seizures, Sudden Childbirths, Blows, Suicides”—said to exceed the variety already offered by any “well-organized Claque,” the paid human applauders who represent what the Machine technologically supersedes. The Glory Machine’s much vaster repertoire extends even further to “Ideas” or “Noises of Discussion (art for art’s sake, Form and Idea)” and even to full-blown “Critical Articles,” churned out while the play under review is still in process of being performed.

The seemingly exotic futuristic device for securing the ideal reception for an aesthetic commodity ends up being nothing other than the ordinary present-day apparatus for the commodity’s production. The final joke is that the Machine’s production of an unambiguously positive aesthetic reception ends up producing an unfeigned pleasure for the audience in the world of the story. “Whence it comes—and here is the solution of the problem of a physical means attaining an intellectual end—that success becomes a reality—that Glory does veritably pass into the auditorium! And the illusory side of the…Apparatus vanishes, fusing itself, positively, in the glow of the True!”

The gimmick lets us down—self-corrects our overestimation of its abilities— only because it has also managed to pump us up. We express contempt for it as a labor-saving trick because our attention was in fact caught by its promises of saving labor; we describe it as cheap or aesthetically impoverished only because it seemed so truly shiny with value.

Excerpt adapted from Theory of the Gimmick: Aesthetic Judgment and Capitalist Form by Sianne Ngai, published by Harvard University Press. Copyright © 2020 by the President and Fellows of Harvard College. Used by permission. All rights reserved. 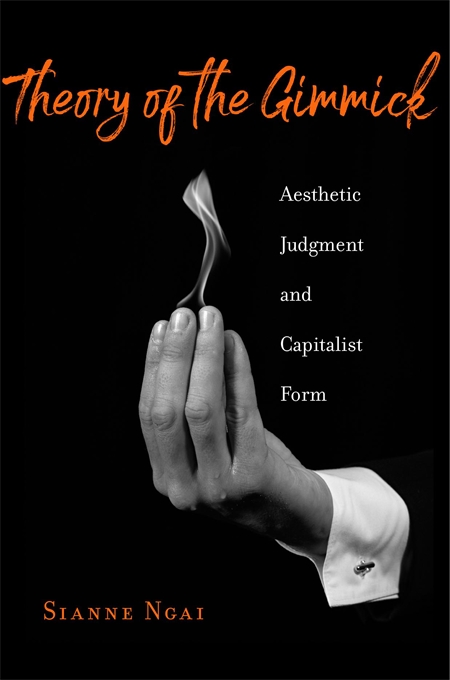 Sianne Ngai is a professor of English at the University of Chicago. She is the author of Ugly Feelings; Our Aesthetic Categories: Zany, Cute, Interesting, winner of the Modern Language Association’s James Russell Lowell Prize; and Theory of the Gimmick: Aesthetic Judgment and Capitalist Form. She has received fellowships from the Institute of Advanced Study in Berlin and the American Council of Learned Societies.