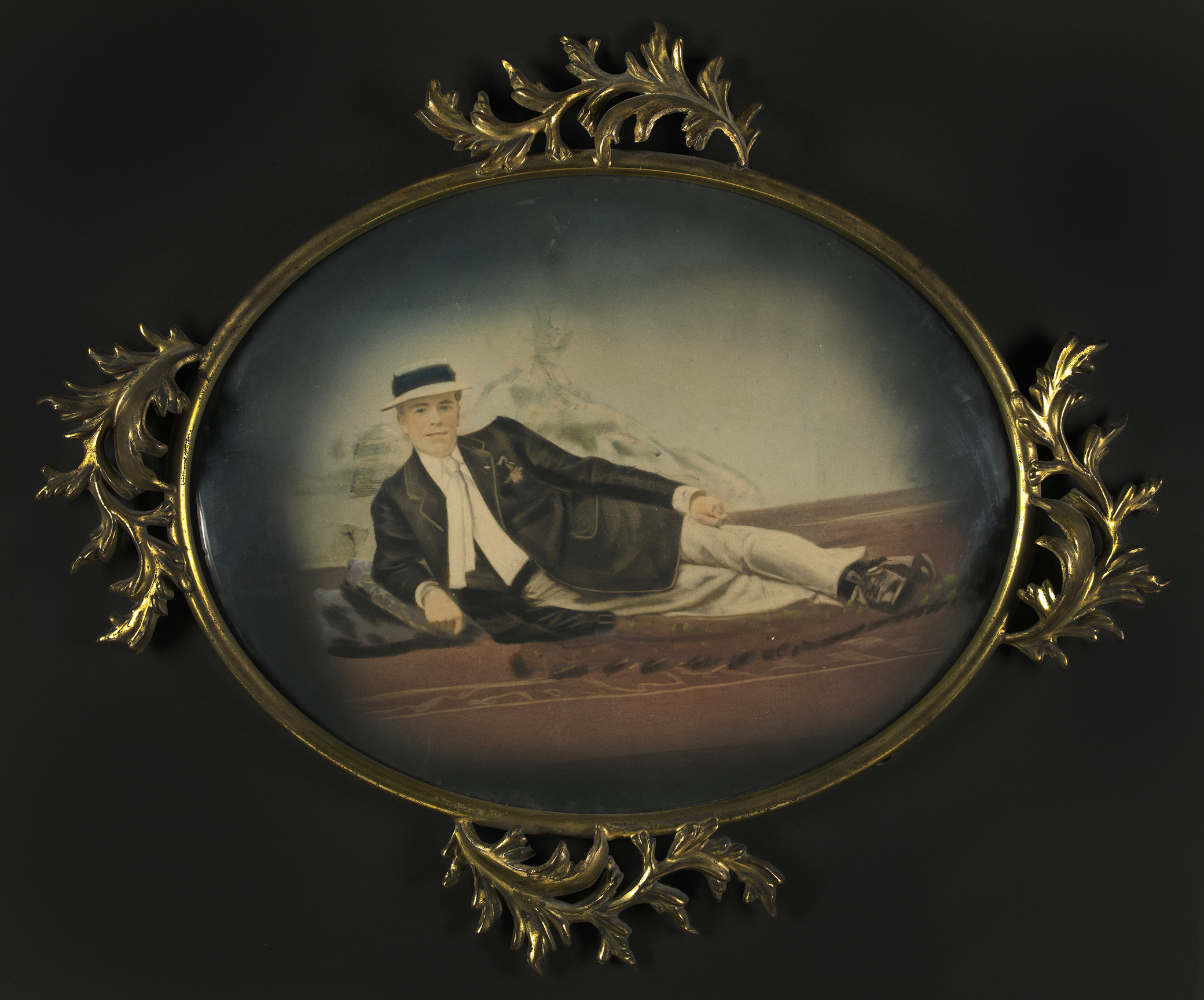 Louise Varèse wrote about fashion in Rogue, a Dada-influenced New York avant-garde literary magazine that published in 1915 and 1916. Rogue, with its title a pun on Vogue, was a so-called little. As the term suggests, the little magazine was a literary magazine with a small circulation. The genre had its heyday in the 1920s and was known to publish artistic and literary work, often aligned with the avant-garde, and thus deemed too daring for a mass magazine audience. Rogue was started by Varèse, who then wrote under the name Louise Norton, and her husband Allen Norton, and, as argued by literary scholar Jay Bochner, it was steeped in the new advances made by women, taking for granted “the voting, smoking, and corsetless woman.”

Varèse’s column—published under the pseudonym “Dame Rouge”—was called “Philosophic Fashions”; Bochner defines its nature as “essentially feminine and, for the period, feminist.” Counteracting what he sees as a lack of serious engagement with her work, he claims that in the pages of Rogue, one finds “a modernism almost entirely produced by women and perhaps their very ability to be modern was sufficiently doubted as to make their commitment appear without great value.”

Here is an excerpt from one of Norton’s columns, “Trouser-Talk,” published in Rogue on April 15, 1915. 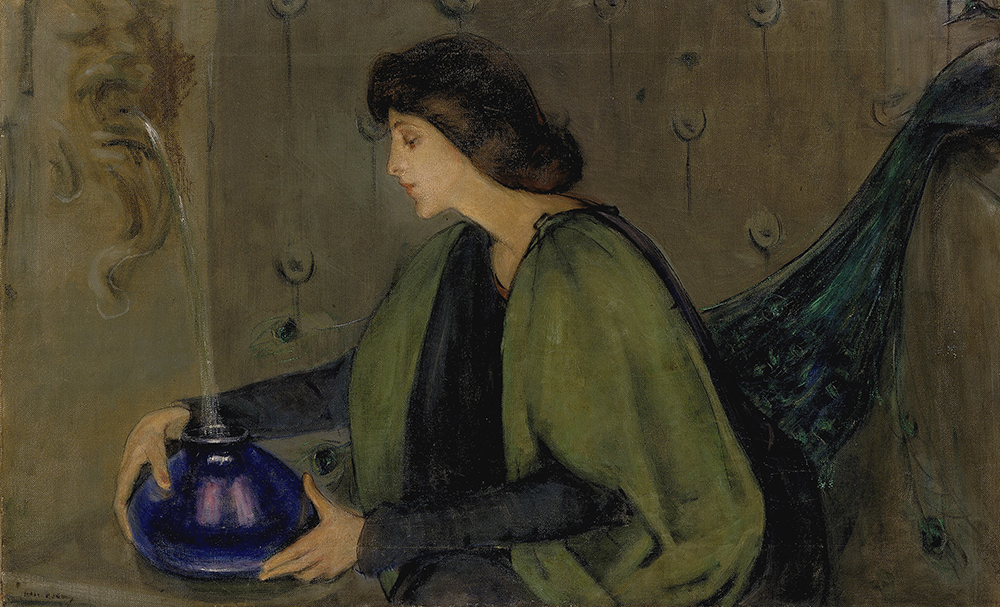 Man is properly the only object that interests man.
—Goethe

Men are such slim creatures these days—even the fat ones. The thin ones look like well-bred eels and the fat ones like well-filled air cushions. I must say they are charming things, some of them, with their narrow-hipped coats, their gloved shoulder blades, and their tipped-up tight trousers, outlining ever so discreetly those most lovely of masculine features, the masculine calves! All this is as it should be, but there are other things that are not.

Now it has been man’s habit, ever since the day Eve first affected the fig leaf, to make sport of feminine fashions and especially to ridicule the discomforts which ladies endure in the name of—La Mode. “Il faut souffrir pour être belle” is axiomatic. But come wonder with me for a moment why no one has been able to comment out of fashion the torturing costume which men have worn these (I’m not good at figures, so say vaguely), these many years. I ask you, are collars more comfortable than corsets? There used to be separate cuffs too! ! ! And shirt fronts (wasn’t it Shaw who christened them, “shields of respectability”?) that were wont to squeak like old palmetto trees in the wind! That is over now, thank God! Collars and cuffs are allowed to be soft, and shirts to pleat themselves into millions of dear little tucks and to remain unstarched at the stiffest function. But, alas! masculine clothes reform advances somewhat after the fashion of the Allies. In spite of the agitation started some years ago to whitewash the character of masculine shirtwaists so that they could be worn abroad without bringing a blush to the sensitive cheek of Mrs. Grundy, coats are still universally worn in and out of doors and season. Men so like sheep in conventionality are just as like donkeys when the goose step is changed.

No wonder shirts are not more amusing than they are; one sees so little of them except behind plate glass or “on the jolly wash line.” Why, even a peacock would not spread his tail under a cloak! The story of the ostrich is here reversed; it is as though the “foolish little ostrich” were to sit on his tail feathers to attract admiration. Yet how delightful shirts have been in the days of wigs, wags, and duels! Then, although as conventionally suppressed quotidianly, they more often were seen because of the modishness of dueling. Recall pictures, many pictures, you have seen of two posturing, rapiered gentlemen in blouses and knee breeches so dainty and debonair as to make any woman as well as envy, as adore. Remember the delicacy of the fabric as it blouses over the satin waistband and billows from the shoulder to the hand; recollect the coquetry and gallantry of the ruffles at the wrist and the luxury of the lace cascade at the throat. Birlady, ’twould be almost as delicate and discriminating a thing to love such a man as to love the finest lady in the land! For indeed a woman must get most or all of her aesthetic pleasure in love out of the images of her own exquisiteness that her lover in his repetitions keeps ever before her, as the pool holds Narcissus’ face up to Narcissus; so that, although in love with a man, a dainty woman of taste does not become careless of in any way coarsened by the contact with his grosser cloth and clay.

Not only do I quarrel with coats that cover shirts and with shirts for their merely negative niceness, but with collars, too, even the reformed ones, because they conceal that detail of the human anatomy which I, for lack of a physiological word, call the beauty spot—that hollow shadowed by the chin that is to the neck what the eyes are to the face and water to a landscape. There is, however, a kind of approvable modesty in the high collar for men. For shame is the acknowledgment of ugliness, and modesty its concealing, so that it was, no doubt, to hide their Adam’s Apples that men’s collars were, in the first instance, cut high. Although it remains an unrecorded legend why the apple stuck in Adam’s throat and not in Eve’s. 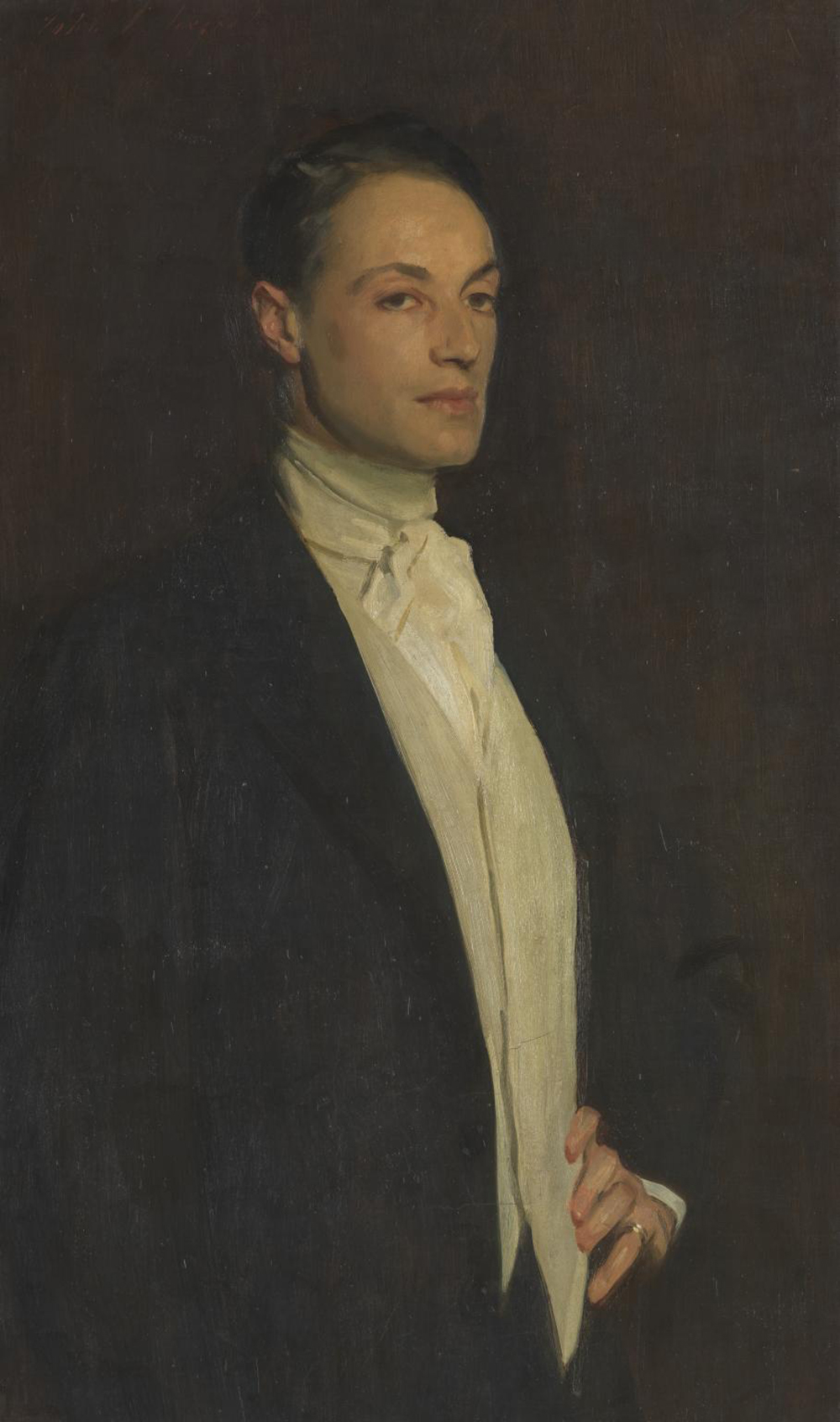 In those same aforementioned pictures of the eighteenth century, look behind the parties of the first part and you will see more obscure figures in the loveliest draperies. They, too, are men! Men in cloaks, graceful, although grave. I used to wish that I might have been born in that era when even men had taste. “Then Carlo came,” as he did in Patagonia, and Broadway smiled (always, when Broadway is uncertain, Broadway smiles), to see him come in the many folds of a military cape out of Italy, buckled with a silver clasp. And when Carlo came again from the shores of the Adriatic he published the fact that, although perhaps in New York it was not noticeable enough to do so, in Venice, at least, he did what the Venetians do and wore their shirts. Such shirts! The collars do just what I said collars should do.

As for trousers…There is so much to say about trousers that I dare not say about them. But this I dare to say, although the truth, that trousers make unduly conspicuous the comical bifurcation of man which deformity philosophers and poets have ridiculed ever since the gods made men to be their playthings and court fools; but, surely, now that man is greater than the gods and privileged to wear clothes of his own design, he should really do something to show himself less absurd. Plato said, “Man is a two-legged animal without feathers.” Swift called him “a forked, straddling animal with bandy legs,” and someone else, it might have been Dryden, likened him to “a forked radish with head fantastically carved.” More unpleasant still is Herr Teufelsdröckh’s definition of man in Sartor Resartus, “an omnivorous Biped that wears Breeches,” and Montaigne said—what Montaigne said of trousers you may read in the third book of his essays, the fifth chapter, entitled “Upon Some Verses of Virgil”! Yet, on the other hand, as Homer Croy says, “trousers are handy”—sometimes.

Some nations have recognized the awkwardness and vulgarity of trousers. The Scot, who has never been accused of anything worse than virtue and absolute virility, has always worn the kilt; and I read, only a week or so ago, in one of our nice, gossipy Sunday sheets (well up in the scandal of prehistoric times) that “the soldiers of Assyrian kings are said to have worn a sort of kilt, while the mountaineers of the Balkans regard it as indispensable”—whether because they thought it decenter or more aesthetic, was not stated.

On the side of the aesthetics there is much to be said for the skirts in preference to trousers as between a mermaid and a terrestrial woman what man, or at least what artist, would pause to choose; though I own that a mere man a mermaid might puzzle! Legs seem ironically to ally us to the Colossus of Rhodes and all the animals. They suggest the utilitarian or the monstrous and always the grotesque. I could become reconciled to legs—I could even forget that legs is legs—if clothed in knee breeches. The curves of the calf would then give the needed punctuation to the leg and pause to the eye. Sportsmen, even English sportsmen, I adore and even sports for their legs’ sakes.

And men aren’t much better when they get undressed. I should say, when they get into undress, for I am not referring now to their somewhat ridiculous anatomy, but to that which covers it by night—the pajama suit; again, without that economy which nature so loves, in two pieces and again cut above the beauty spot. I am speaking always for the majority of men, for it is the majority who endure these things. With more compassion and comprehension I would acknowledge those who lie in silk and walk abroad in candid collars with handkerchiefs stained in Phoenician dyes (from Paris) and steeped in “the costly perfumes of Arabian dew” (from Paris). Indeed one brave shop tries, by displaying them in its windows on Broadway and Forty-Fourth Street, to popularize a more décolleté pajama suit. It will have to advertise them in Town Topics or the Saturday Evening Post, and point out before their choiceness their cheapness, before it can hope to interest the so tired Business Man, who is apparently the man inevitably catered to by the commercially sagacious—magazine editors, theatrical managers, publishers, and tailors.

But how charming, after all, when men grow dainty and women daring! Today might and tomorrow will bring such miracles to pass. Definitions are losing something of their definiteness. Sex is a technicality for the consideration of pathology and physiology; the psychologist is after the individual. It is no longer a question of are you a Man? or are you a Woman?—the answer is, I am an Individual. “I am what I am and so will I be,” as the old lines go. There are men who wear their hair long; there are women who wear their hair short; and yet there are those who still say, “A man’s a man for a’ that!” Trousers, and other things, I hold to be mere arbitrary symbols of sex which I, for one, think obsolete. Born in Pittsburgh, the writer and translator Louise McCutcheon left Smith College before graduating in 1911 and married the editor Allen Norton; the couple started the magazine Rogue, a Dada-influenced New York avant-garde literary magazine that published in 1915 and 1916. She wrote a defense of Marcel Duchamp’s Fountain in another Dada magazine after the urinal was not included in a Society of Independent Artists exhibition in 1917. (Theories abound about her role in the work’s submission.) She wrote a biography of her second husband, the composer Edgard Varèse, and translated the works of Marcel Proust, Stendhal, Arthur Rimbaud, and other French writers. Varèse died at the age of ninety-eight in Eugene, Oregon.