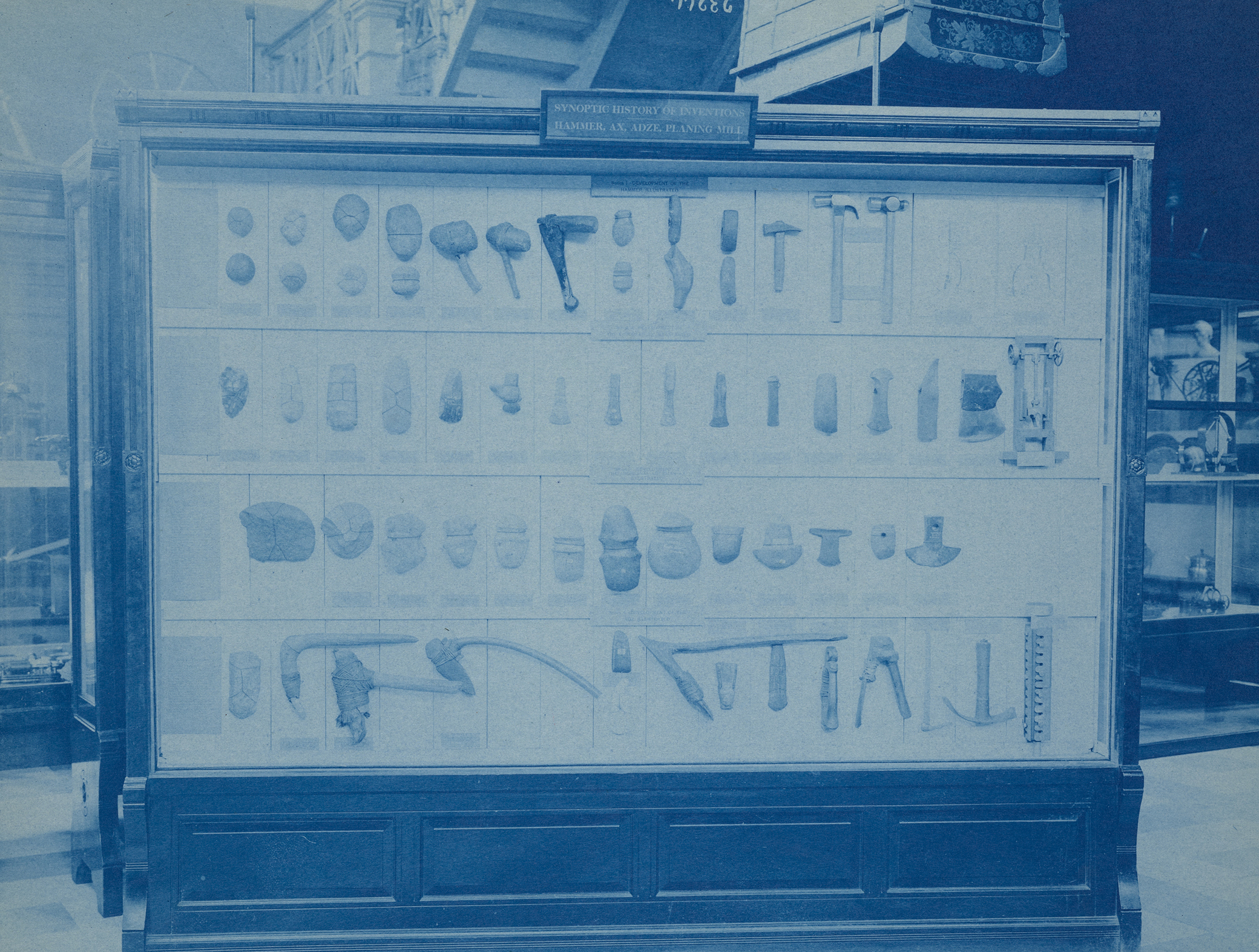 adze: A tool similar to an ax, with a blade set at right angles to the shaft and curving inward, used for cutting the surface of wood. Of unknown origin; from Old English adesa and adese; addice was standard in early modern English until 17th cent. “The names of tools are among the most common migratory words (Wanderwörter and Kulturwörter).”—Anatoly Liberman, Analytic Dict. of English Etymology, 2008 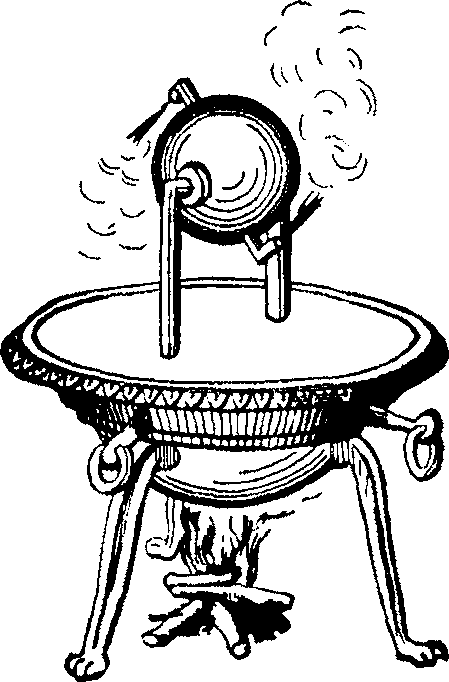 A steam toy supposed to have been invented by Hero of Alexandria. From Latin Aeolī pilae, pneumatic mechanism or toy (lit., “doorway of Aeolus,” so called from vapor bursts of the opened door of the cave of Aeolus). “Experimental philosophers produce an artificial wind by an instrument called an aeolipile.”—Oliver Goldsmith, A History of the Earth, 1774

algorithm: A procedure or set of rules used in calculation and problem solving. From the Latin­ized surname of mathematician Muhammad ibn Musa al-Khwarizmi (“native of Khwarazm,” now Khiva in Uzbekistan).

axle: The center pin or spindle upon which a wheel revolves, or which revolves along with it. From Old Germanic ahsâ-, related to Sanskrit áksha, Greek ἄξων.

cybernetics: The field of control and communication theory, whether in machine or animal. From ancient Greek κυβερνήτης, steersman. First use, 1948.

derrick: A structure erected over a deep-bored well, esp. an oil well, to support the drilling apparatus; also, a gallows. From Thomas Derrick, Elizabethan executioner at Tyburn. The name is originally from Dutch Dirk, Dierryk, Diederik.

fork: Anglicized form of Latin furca, a yoke in ancient Rome under which defeated enemies were made to pass as a token of their submission; a forked stake used as a whipping post. Also “the two forefingers; to put your forks down is to pick a pocket.”—James Hardy Vaux, New and Comprehensive Vocabulary of the Flash Language, 1819

Gestell: (German) “enframing,” Martin Heidegger’s concept of the frame of mind that views the world as the means toward ends (“The essence of technology is by no means anything technological”). This sense of technology precedes the development of modern science.

golem: In Jewish legend, a human figure made of clay or mud and brought to life, typically by means of a Hebrew word written on its forehead or placed in its mouth. The golem was said to have been created by Rabbi Löw of Prague (d. 1609) in order to protect the city’s Jewish population. The golem began to act independently of its master, and the rabbi returned it to dust.

hammer: ( fig.) A person or agency that smites, beats down, or crushes, as with blows of a hammer; e.g., Greg “The Hammer” Valentine. (Cf. Latin malleus, Old French martel.)

Lancastrian machine: A system of education based on the principle that placing students with different academic capabilities in the same class will make schools more efficient. Coined by Thomas Carlyle, 1829.

lever: A bar of iron or wood serving to dislodge from its position some heavy or firmly fixed object; a crowbar, handspike. From Old French lever, to raise.

Luddism: Intense dislike of or opposition to technological innovation. According to George Pellew’s Life of Lord Sidmouth (1847), Ned Lud was “a person of weak intellect” who lived in a Leicestershire village circa 1779, and who in a fit of insane rage destroyed two stocking frames so completely that the saying “Lud had been here” was used in hosiery districts when a frame suffered extraordinary damage.

mono no aware: 物の哀れ, もののあはれ ( Japanese) Lit., “being deeply moved by things”; the pathos of things; the sense of sadness arising from an awareness of the impermanence of earthly things.

neologism: The coining or use of new words or phrases. “Neologism, in revolutionary times, is not an infirmity of caprice.”—Thomas De Quincey, 1851

sabotage: The malicious damaging or destruction of an employer’s property by workmen. From French sabot, a wooden shoe. The term came into use after the French railway strike of 1910, when strikers cut the shoes (sabots) holding railway lines.

shadoof: A type of contrivance used for raising water for irrigation, the first such device used in several ancient civilizations. From Egyptian Arabic shādūf. In India it is called a denkli or paecottah; in Sumer, zirigum; in Greece, chelonion; and in Latinate regions, tolleno.

shovel: A spade-like implement. From Low German schuffel; the Germanic word is apparently from the root shove.

steelyard: A balance consisting of a lever with unequal arms, which moves on a fulcrum; the article to be weighed is suspended from the shorter arm. Word formation probably suggested by the existence of the Steelyard, a place on the north bank of the Thames above London Bridge where the Hanseatic League had its English establishment.

sickle: An agricultural implement similar to a reaphook but distinguished by having a serrated cutting edge. It is not certain that the word can be regarded as an early adoption of the Campanian Latin secula, from secāre, to cut.

tech bro: “A U.S.-born, college-educated, Patagonia-clad male whose entry-level salary at one of the FAANG companies was at least $125,000 and who frequently insists that his female coworkers give him high fives. Typically works in product management or marketing. Had he been born ten years earlier, he would have been a finance bro instead.”—Julia Carrie Wong and Matthew Cantor, Guardian, 2019

tool: “Any instrument of manual operation. A hireling, a wretch who acts at the command of another.”—Samuel Johnson, Dict. of the English Language, 1755

“In the last decades of the eighteenth century, and in the first half of the nineteenth century, a number of new words, which are now of capital importance, came for the first time into common English use, or, where they had already been used in the language, acquired new and important meanings.”—Raymond Williams, Culture and Society, 1780–1950

Below, from Merriam-Webster, are the best estimates of the earliest recorded uses in English of some technological words and phrases from 1780 to 1850.