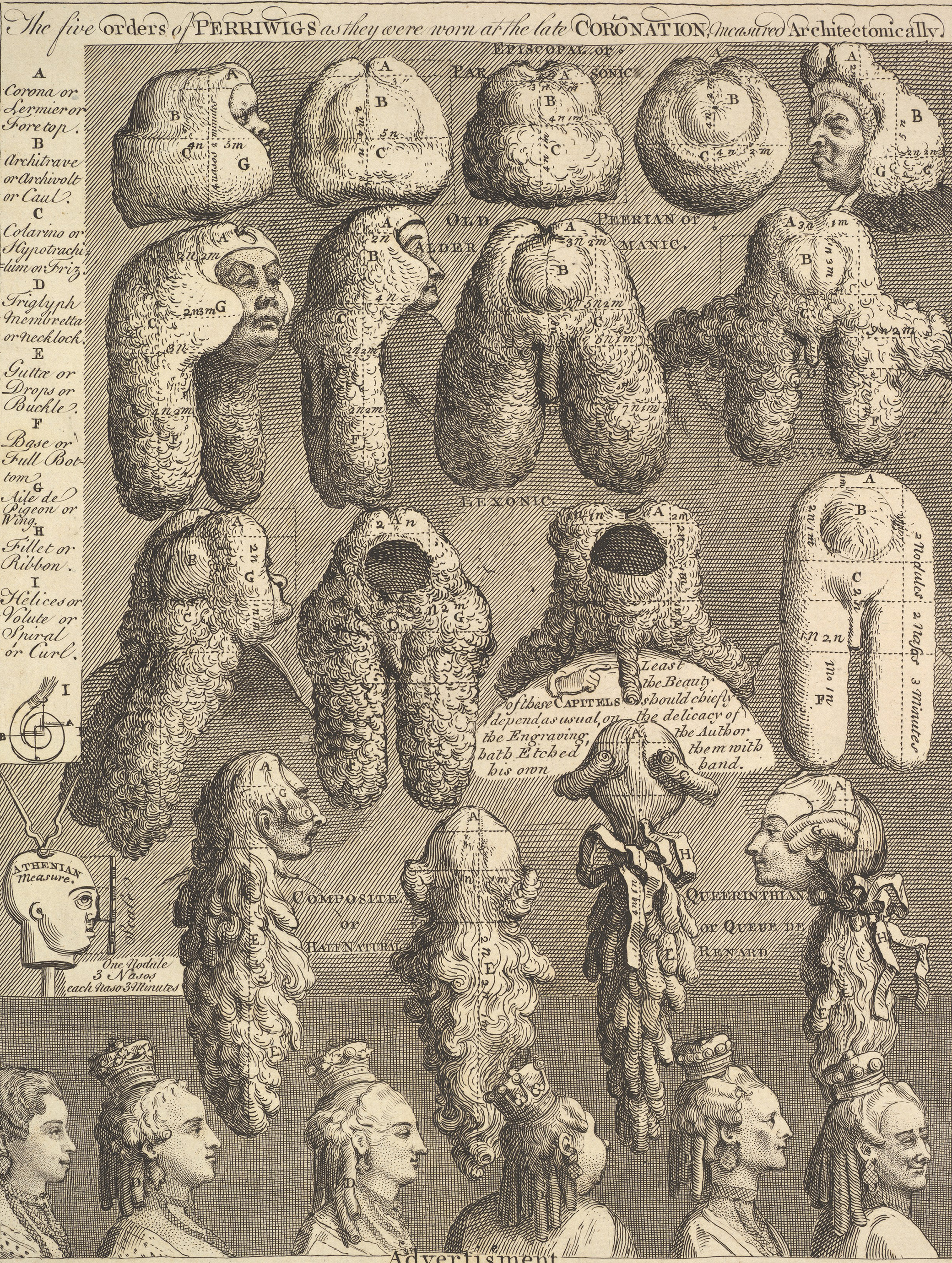 The Five Orders of Periwigs, by William Hogarth, 1761. The Metropolitan Museum of Art, bequest of Phyllis Massar, 2011.

The Restoration of the Stuart monarchy in England in 1660 brought a great revival of interest in fashion, both at court and among those who could afford to imitate court dress. Clothes not only indicated status but sometimes political allegiances and religious beliefs as well. During the civil war period they proclaimed whose side you were on, since Cavaliers—members of the Established Church who recognized the king as its head, supported bishops and the Book of Common Prayer, and ardently upheld the sacredness of the king’s majesty—and Roundheads—who positioned themselves as defenders of historic English freedoms in the face of royal tyranny during the English Civil War—dressed differently. Broadly, the Interregnum had been a time of austerity and now people coveted luxury, but clothes continued to have political meaning and the cloth they were made from reflected national, commercial interests.

King Charles II consciously fashioned his image with his tailors, understanding the value of clothes in affirming the status of monarchy. When he arrived in England after the Restoration, he was dressed in the height of French fashion. Although this vogue was widely admired, it had its critics too: Why ape Paris fashions when France’s Catholicism and system of absolute monarchy were loathed and feared? Numerous London trades were making money from royalty by turning out commemorative items; cloth dealers also sought to profit from royalty, urging the king to wear textiles made in England. In October 1665 Charles duly announced that he and the queen would wear only English cloth, except linen and calicoes, and encouraged the court to do the same.

The royals soon saw that it would be expedient to claim to break with French fashion and create an “English” style. Samuel Pepys recorded how, in October 1666, Charles ostentatiously began to wear a vest, or long waistcoat. It may well have been influenced by examples of Turkish dress worn on stage; John Evelyn credited the new fashion with being of Persian origin:

Thence to Court, it being the first time of his Majesties putting himselfe solemnly into the Eastern fashion of vest, changing doublet, stiff collar, [bands] & cloake &c: into a comely vest, after the Persian mode with girdle or shash…resolving never to alter it, & to leave the French mode.

Suits were now usually of somber-colored velvets, although vests were in brighter, contrasting colors; male dress gradually settled on coat, vest, and breeches, foreshadowing the modern suit. Charles I had mostly worn flashy satin, but Charles II preferred woven cloth: camlets, made of wool and silk, or velvet. Although he wore English cloth, he augmented it with luxury fabrics from France and Italy. So in 1668 Parliament petitioned the king and his brother James to set an example by wearing only English manufactures. The king’s personal taste was for casual, quite plain clothes for everyday wear, but fashionable court dress ran to extremes. For women, dresses became more structured, with a tight, low-waisted bodice that was very low-cut; full, high-waisted gowns went quite out of fashion. 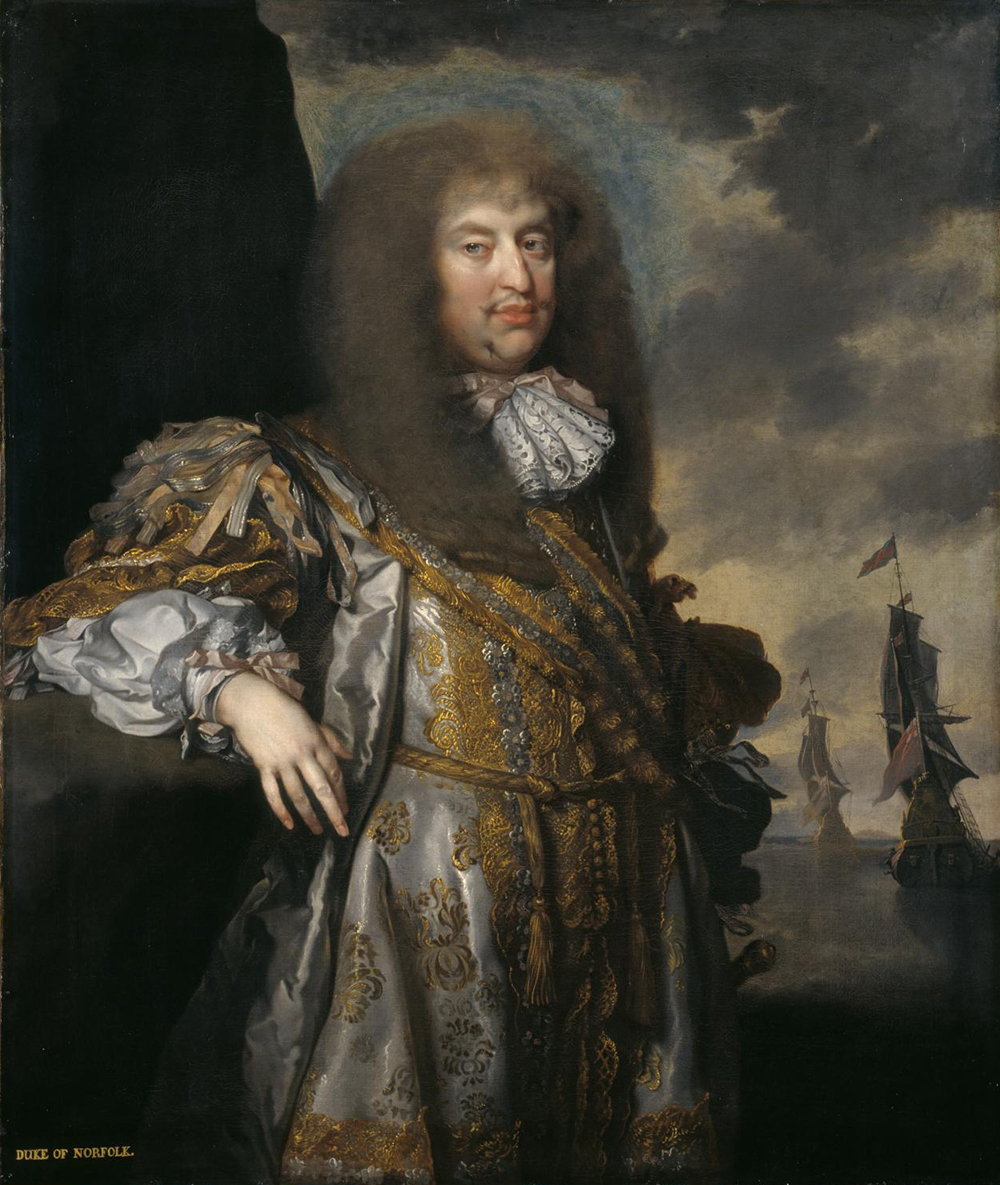 Among elite men, extravagant, long, curling wigs became the norm, because when Charles began to go gray toward the end of 1663, he started to wear them. Possibly he was already trapped by his royal image. Pepys cut his hair short and put on a periwig for the first time on September 3, 1665; he was rather nervous in case he was teased. Many others followed court fashions and bought royalist accessories for tactical reasons, as a demonstration of loyalty. Such behavior prompted cynicism: turncoats, for example, who with regime change had switched political and perhaps religious allegiances, found it politic to sport snuffboxes bearing the king’s portrait.

The Restoration brought prosperity to some and encouraged demonstrations of wealth and status after the leveling effects of the Interregnum. Social climbers eagerly purchased items of dress and domestic goods that would convey prestige as well as patriotism. Consequently, in December 1662, Pepys recorded how ashamed he was that his wife was still wearing her taffeta dress when all fashionable women had purchased warmer mohair gowns. The number of Londoners who could afford luxury fabrics remained small, so novelty was at a premium among this elite. Nobody wanted to be wearing the same patterned fabric as everyone else.

Fashion trends posed challenges for cloth importers. Alderman Sir William Turner, a textiles merchant based in St. Paul’s Churchyard who mostly imported fabrics from Genoa and Paris, found that he had to satisfy new trends quickly and not overstock. At the beginning of September 1664, he wrote to his chief foreign supplier, Boquelin and Sons of Paris, to explain “there will be newer fashions for winter and therefore I will not order any tabys [silks] yet till the fashions are settled for winter.” He later added, “As for the Brocades which you would fain persuade me to keep I have already said enouf to make you understand the nature of flowred silks the fashion changing so often that they are worth nothing when something newer comes.” Turner certainly profited from the extravagance of others: already in 1660 his estimated annual income was £2,000. But he was a Puritan and devoted much of his earnings to charitable works, winning a knighthood for public service in 1662.

In Restoration times, as now, fashion was big business. In 1671 a hot news item was that French drapers had come to London and bought up all English light-colored broadcloth to the value of many thousand pounds. It would be the only material worn in the French court that winter. This was welcome news, unless Londoners were determined to follow the French style. All the while, fashion trends were becoming more complex with the expansion of trade routes. Sir Joseph Williamson, royalist MP and master of the Clothworkers’ Company, noted at a committee for trade in 1676 that “fashions of ribbons, stuffs, etc. run round the world.” Outdated fashions from France were brought to England as new, and then passed to Ireland and the West Indies. When the manufacture of one sort of goods was established in England, the French would set up another fashion, and when that too was adopted in England, they would change it for a third. Canny merchants bought English cloth direct from weavers, then sold it as French at a higher price. Williamson warned that England imported so much linen, silk, wine, and brandy from across the Channel, the balance of trade favored France. To encourage English manufactures and limit French imports at a time of depressed trade, ministers again proposed that the king should wear only English textiles, and that ladies of the court should wear only English silks or silk mixtures. Because the king’s mistresses were Catholics (excepting only Nell Gwyn), their fondness for French fashions rankled. Prudently, Charles did now adopt English medley cloth, which was made of multicolored fibers woven together.

London’s parks were places where people could display their fine dress. Charles made improvements to parks so that they offered even more attractive walks, although John Wilmot, the libertine Earl of Rochester, remarked that after dusk they were used mostly for sex. In October 1660 the king ordered a river to be cut in St. James’ Park and a new alley for the game pall mall, an early form of croquet, to run along the south side of the park wall. These alterations, together with the improvements to Whitehall Palace, employed some three hundred men. Unfortunately, on the other side of the park wall lay the highway between Charing Cross and St. James’ Palace; carriages created so much dust that players often found they could not continue with their game. At some expense Charles was forced to move the highway further north, creating today’s Pall Mall. 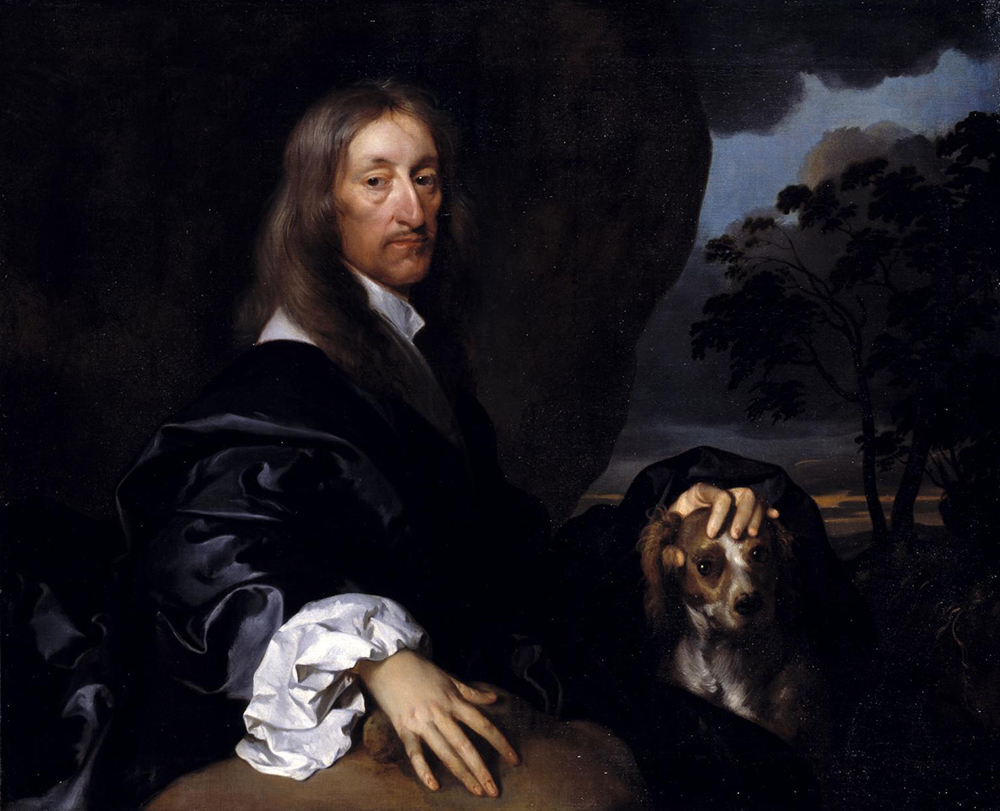 Nonconformists, Quakers especially, still wore sober costumes that set them apart, although they dropped the uncompromising Puritan habit of the earlier period. They might not wear black, which was associated with mourning, but still favored muted colors. They rejected ornament and despised fashion trends. The poor struggled to appear respectable enough to go to church, often pawning Sunday clothes to tide them over for the rest of the week. Because clothing was expensive, London had a thriving secondhand clothes market, with many dealers to the east of Tower Hill, the place of execution for high-profile traitors. Because garments could so easily be turned into ready cash, street robbers targeted victims for their clothes as well as their valuables. In 1661 a gang of nine laborers assaulted the elderly Sir John Scudamore in St. Giles-in-the-Fields, taking not only his money and jewels but also his hat, cloak, breeches, doublet, shirt, and gloves. The estimated value of his clothes alone was £17 2s. All the robbers were arrested and sentenced to death.

The sumptuous costumes of the aristocracy, soon associated with the sensual pleasures of the Restoration court, elicited disapproval tinged with envy. The outrageous behavior of some aristocratic rakes hardened criticism. Lord Rochester killed a waterman merely for commenting to another that Rochester was a handsome man. Hearing this as he passed by, Rochester turned back, swore, and asked the waterman who made him a judge of beauty. He gave the man a box on the ear and when the waterman seemed about to retaliate, drew his sword and ran him through. Gentlemen routinely wore swords—usually rapiers—as a mark of their honor and status, almost as a decorative element of dress, so minor disputes easily escalated. They set a poor example; London’s homicide rate, although decreasing, was higher than it is today. The violence was disturbing; one resident of St. Martin-in-the-Fields was prosecuted for wishing “all the gentry in the land would kill one another, so that the comminalty might live the better.” 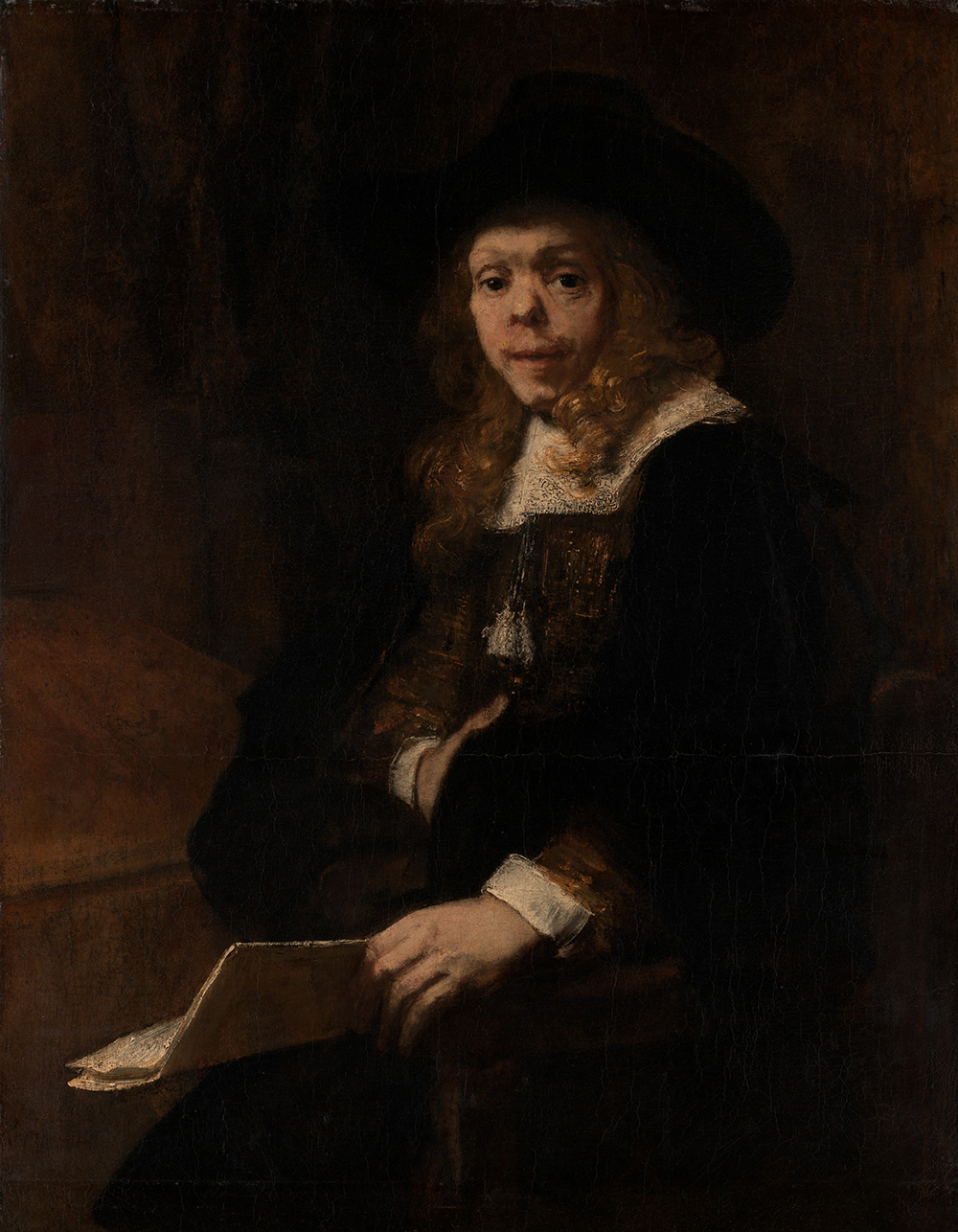 The fascination that the court inspired slowly came to be mixed with repugnance at its immorality; people understood that silks and fine wigs often concealed the ravages of syphilis. Contemporary advertisements promising discreet cures pulled no punches in the description of sexually transmitted diseases. One medicine promised to:

Cure a Gonorrhaea, Running of the Rein or Clap, Pain, Heat, Scalding in making Water, &c. in a few Days: And very speedily take away all Aches or Pains in the Head, Back, Shoulders, Arms, Legs, or Night-Pains; Sores or Ulcers in the Mouth or Throat; All Sorn and stubborn Scabs, or breaking out in any part of the Body; preserve the Palate and Bridge of the Nose; purifie the Blood; perfectly free the Body of the Remains of any Pox or Clap formerly ill Cured.

Prince Rupert, the king’s cousin, reputed to be suffering from chronic syphilis, finally submitted to operations on his skull to release corrupted matter. Pepys saw him at Whitehall Palace less than two months afterward, “pretty well as he used to be, and looks well; only, something appears to be under his periwig on the crown of his head.” The prince may simply have undergone treatment for an old injury, since he was once shot in the head, but this was not Pepys’ understanding. Many writers who brooded on appearance and reality developed a corrosive cynicism; it was a theme that permeated through to popular literature and colored the spirit of the age. The ballad “News from Hide Park” describes a country gentleman’s encounter with a prostitute, who seemed an “armful of satin” but divested of her wig and fine clothes became “like a Lancashire witch of fourscore and ten.” Margarette Lincoln was a visiting fellow at Goldsmiths, University of London, and is curator emeritus at the National Maritime Museum, where she was deputy director from 2007 until 2015. She is the author of London and the Seventeenth Century, Trading in War, and British Pirates and Society, 1680–1730.