Scarcely had I set foot in Paris ere I had fresh evidence of the detestable interest taken by William Wilson in my concerns. Years flew, while I experienced no relief. Villain! At Rome, with how untimely, yet with how spectral an officiousness, stepped he in between me and my ambition! At Vienna, too—at Berlin—and at Moscow! Where, in truth, had I not bitter cause to curse him within my heart? From his inscrutable tyranny did I at length flee, panic-stricken, as from a pestilence; and to the very ends of the earth, I fled in vain.

And again and again, in secret communion with my own spirit would I demand the questions “Who is he? Whence came he? And what are his objects?” But no answer was there found. And then I scrutinized, with a minute scrutiny, the forms and the methods and the leading traits of his impertinent supervision. But even here there was very little upon which to base a conjecture. It was noticeable, indeed, that in no one of the multiplied instances in which he had of late crossed my path had he so crossed it except to frustrate those schemes, or to disturb those actions, which, if fully carried out, might have resulted in bitter mischief. Poor justification this, in truth, for an authority so imperiously assumed! Poor indemnity for natural rights of self-agency so pertinaciously, so insultingly denied!

I had been forced to notice that my tormentor, for a very long period of time (while scrupulously and with miraculous dexterity maintaining his whim of an identity of apparel with myself) had so contrived it that I saw not, at any moment, the features of his face. Thus far I had succumbed supinely to this imperious domination. The sentiment of deep awe with which I habitually regarded the elevated character, the majestic wisdom, the apparent omnipresence and omnipotence of Wilson added to a feeling of even terror, with which certain other traits in his nature and assumptions inspired me. But, of late days, I had given myself up entirely to wine; and its maddening influence upon my hereditary temper rendered me more and more impatient of control. I began to murmur—to hesitate—to resist. And was it only fancy which induced me to believe that with the increase of my own firmness, that of my tormentor underwent a proportional diminution? Be this as it may, I now began to feel the inspiration of a burning hope, and at length nurtured in my secret thoughts a stern and desperate resolution that I would submit no longer to be enslaved.

Opposition may become sweet to a man when he has christened it persecution.

It was at Rome, during the carnival of 1835, that I attended a masquerade in the palazzo of the Neapolitan Duke DiBroglio. I had indulged more freely than usual in the excesses of the wine table; and now the suffocating atmosphere of the crowded rooms irritated me beyond endurance. The difficulty, too, of forcing my way through the mazes of the company contributed not a little to the ruffling of my temper; for I was anxiously seeking (let me not say with what unworthy motive) the young, the gay, the beautiful wife of the aged and doting DiBroglio. With a too unscrupulous confidence, she had previously communicated to me the secret of the costume in which she would be habited, and now, having caught a glimpse of her person, I was hurrying to make my way into her presence. At this moment I felt a light hand placed upon my shoulder and that ever-remembered low, damnable whisper within my ear.

In an absolute frenzy of wrath, I turned at once upon him who had thus interrupted me, and seized him violently by the collar. He was attired, as I had expected, in a costume altogether similar to my own, wearing a Spanish cloak of blue velvet, begirt about the waist with a crimson belt sustaining a rapier. A mask of black silk entirely covered his face.

“Scoundrel!” I said in a voice husky with rage, while every syllable I uttered seemed as new fuel to my fury. “Impostor! Accursed villain! You shall not dog me unto death! Follow me, or I stab you where you stand!” And I broke my way from the ballroom into a small antechamber adjoining, dragging him unresistingly with me as I went.

Upon entering, I thrust him furiously from me. He staggered against the wall, while I closed the door with an oath and commanded him to draw. He hesitated but for an instant, then, with a slight sigh, drew in silence and put himself upon his defense.

The contest was brief indeed. I was frantic with every species of wild excitement, and felt within my single arm the energy and power of a multitude. In a few seconds I forced him by sheer strength against the wainscoting and thus, getting him at mercy, plunged my sword with brute ferocity repeatedly through and through his bosom. 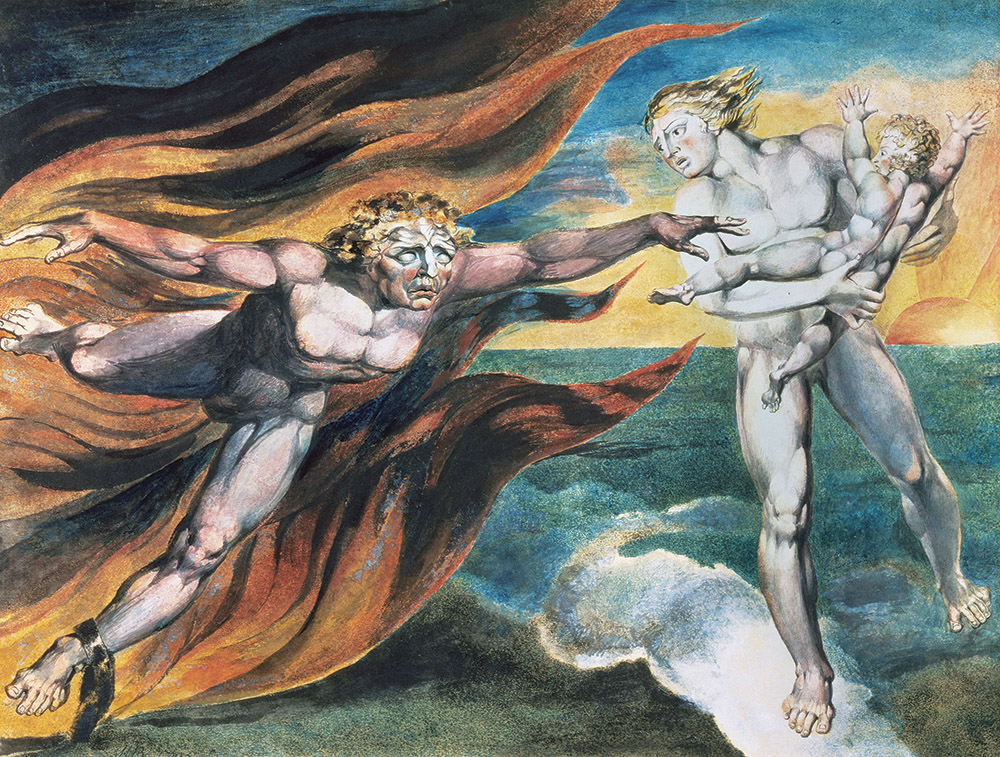 The Good and Evil Angels Struggling for Possession of a Child, by William Blake, c. 1800. © Tate, London / Art Resource, NY.

At that instant some person tried the latch of the door. I hastened to prevent an intrusion and then immediately returned to my dying antagonist. But what human language can adequately portray that astonishment, that horror which possessed me at the spectacle then presented to view? The brief moment in which I averted my eyes had been sufficient to produce, apparently, a material change in the arrangements at the upper or farther end of the room. A large mirror—so at first it seemed to me in my confusion—now stood where none had been perceptible before; and as I stepped up to it in extremity of terror, mine own image, but with features all pale and dabbled in blood, advanced to meet me with a feeble and tottering gait.

Thus it appeared, I say, but was not. It was my antagonist—it was Wilson, who then stood before me in the agonies of his dissolution. His mask and cloak lay where he had thrown them upon the floor. Not a thread in all his raiment—not a line in all the marked and singular lineaments of his face which was not, even in the most absolute identity, mine own!

It was Wilson; but he spoke no longer in a whisper, and I could have fancied that I myself was speaking while he said, “You have conquered, and I yield. Yet henceforward art thou also dead—dead to the world, to heaven and to hope! In me didst thou exist—and in my death, see by this image, which is thine own, how utterly thou hast murdered thyself!”

From “William Wilson.” The first of Poe’s works to be translated into French, this story was based on the years he spent as a student at the Manor House School outside London from 1817 to 1820. The idea of the divided self was also inspired by Washington Irving’s “An Unwritten Drama of Lord Byron,” in which the main character kills his double. “Everyone carries a shadow,” psychologist Carl Jung said in 1937, “and the less it is embodied in the individual’s conscious life, the blacker and denser it is.”

Me, Myself, and I

“The mind is a kind of theater.”More 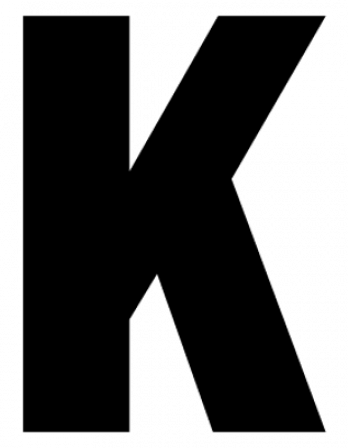