Queen Elizabeth appeared to be so affectionate to my mistress, Queen Mary, her good sister, that she expressed a great desire to see her.

And because her desired meeting could not so hastily be brought to pass, she appeared with great delight to look upon her majesty’s picture. She took me to her bedchamber and opened a little cabinet, wherein were divers little pictures wrapped within paper, and their names written with her own hand upon the papers. She took out the queen’s picture, and kissed it; and I adventured to kiss her hand, for the great love evidenced therein to my mistress. She showed me also a fair ruby, as great as a tennis ball; I desired that she would send it as a token to my queen. She said that if the queen would follow her counsel, she would in process of time get all that she had; that in the meantime, she was resolved in a token to send her with me a fair diamond.

She inquired of me many things relating to Scotland and other countries wherein I had traveled. She caused me to dine with her dame of honor, my Lady Strafford (an honorable and godly lady, who had been at Geneva banished during the reign of Queen Mary), that I might be always near her, that she might the more conveniently confer with me. At divers meetings we had divers purposes. The queen my mistress had instructed me to leave matters of gravity sometimes and cast in merry purposes, lest otherwise she should be wearied, she being well informed of that queen’s natural temper. Therefore, in declaring my observations of the customs of Dutchland, Poland, and Italy, the buskins of the women was not forgot, and what country weed I thought best becoming gentlewomen. The queen said she had clothes of every sort, which every day thereafter, so long as I was there, she changed. One day she had the English weed, another the French, and another the Italian, and so forth. She asked me which of them became her best. I answered, in my judgment, the Italian dress; which answer I found pleased her well, for she delighted to show her golden-colored hair, wearing a caul and bonnet as they do in Italy. Her hair was rather reddish than yellow and curled in appearance naturally.

She desired to know of me what color of hair was reputed best, and whether my queen’s hair or hers was best, and which of them two was fairest. I answered that the fairness of them both was not their worst faults. But she was earnest with me to declare which of them I judged fairest. I said that she was the fairest queen in England, and mine in Scotland. Yet she appeared earnest. I answered that they were both the fairest ladies in their countries, that her majesty was whiter, but my queen was very lovely. She inquired which of them was of highest stature. I said my queen. Then, said she, she is too high, for I myself am neither too high nor too low. Then she asked what exercises she used. I answered that when I received my dispatch, the queen was lately come from the Highland hunting. That when her more serious affairs permitted, she was taken up with reading of histories. That sometimes she recreated herself in playing upon the lute and virginals. She asked if she played well. I said reasonably for a queen. 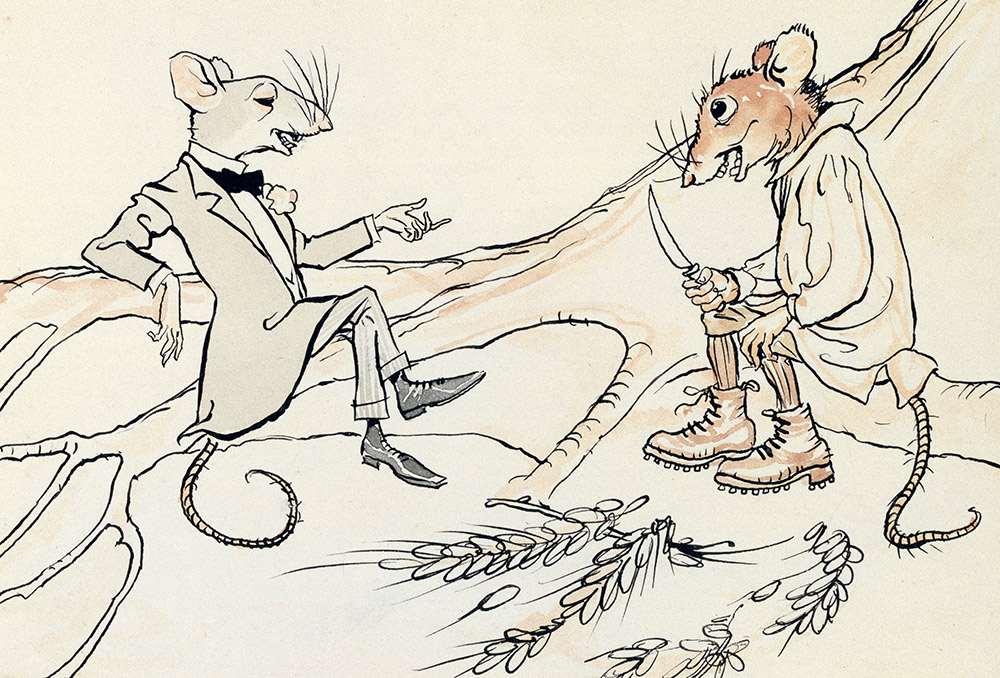 The Town Mouse and the Country Mouse, illustration from a 1912 edition of Aesop’s Fables, by Arthur Rackham. © Chris Beetles Ltd, London / Bridgeman Images.

That same day after dinner, my lord of Huns­don drew me up to a quiet gallery that I might hear some music; but he said he dared not avow it, where I might hear the queen play upon the virginals. After I had hearkened awhile, I took by the tapestry that hung before the door of the chamber, and seeing her back was toward the door, I ventured within the chamber and stood a pretty space, hearing her play excellently well; but she left off immediately so soon as she turned about and saw me. She appeared to be surprised to see me, and came forward, seeming to strike me with her hand, alleging that she used not to play before men, but when she was solitary, to shun melancholy. She asked how I came there. I answered, as I was walking with my lord of Hunsdon, as we passed by the chamber door, I heard such melody as ravished me, whereby I was drawn in ere I knew how, excusing my fault of homeliness as being brought up in the court of France, where such freedom was allowed, declaring myself willing to endure what kind of punishment her majesty should be pleased to inflict upon me for so great an offense. Then she sat down low upon a cushion, and I upon my knees by her, but with her own hand she gave me a cushion to lay under my knee, which at first I refused, but she compelled me to take it. She then called for my Lady Strafford out of the next chamber, for the queen was alone. She inquired whether my queen or she played best. In that I found myself obliged to give her the praise. She said my French was very good and asked if I could speak Italian, which she spoke reasonably well. I told her majesty I had no time to learn the language, not having been above two months in Italy. Then she spoke to me in Dutch, which was not good, and would know what kind of books I most delighted in, whether theology, history, or love matters? I said I liked well of all the sorts. Here I took occasion to press earnestly my dispatch; she said I was sooner weary of her company than she was of mine. I told her majesty that, though I had no reason of being weary, I knew my mistress’ affairs called me home, yet I was stayed two days longer, that I might see her dance, as I was afterward informed. Which being over, she inquired of me whether she or my queen danced best. I answered that the queen danced not so high or disposedly as she did. Then again she wished that she might see the queen at some convenient place of meeting. I offered to convey her secretly to Scotland by post, clothed like a page, that under this disguise she might see the queen, as James V had gone in disguise with his own ambassador to see the Duke of Vendôme’s sister, who should have been his wife, telling her that her chamber might be kept in her absence, as though she were sick; that none need be privy thereto except Lady Strafford and one of the grooms of her chamber. She appeared to like that kind of language, only answered it with a sigh, saying, Alas, if I might do it thus!

From his Memoirs. The encounters here reported by Melville, Scottish ambassador to Elizabeth’s court, occurred one year before Mary married Henry Stuart—whom Mary, according to Melville, called “the lustiest and best proportioned long man that she had seen”—and three years before that marriage ended with Henry’s murder. Fleeing Scotland, Mary hoped her cousin Elizabeth would protect her, but the queen, suspicious that the Catholic Mary would raise forces against her, confined her to limited grounds. In 1587 Mary was executed after being accused of participating in a plot against Elizabeth.