If I were asked to answer the following question, What is slavery?, and I should answer in one word, Murder, my meaning would be understood at once. No extended argument would be required to show that the power to take from a man his thought, his will, his personality, is a power of life and death; and that to enslave a man is to kill him.

Why, then, to this other question, What is property?, may I not likewise answer, It is robbery, without the certainty of being misunderstood; the second proposition being no other than a transformation of the first?

Such an author teaches that property is a civil right, born of occupation and sanctioned by law; another maintains that it is a natural right, originating in labor—and both of these doctrines, totally opposed as they may seem, are encouraged and applauded. I contend that neither labor, nor occupation, nor law, can create property; that it is an effect without a cause: am I censurable?

Reader, calm yourself: I am no agent of discord, no firebrand of sedition. I anticipate history by a few days; I disclose a truth whose development we may try in vain to arrest; I write the preamble of our future constitution. This proposition which seems to you blasphemous—property is robbery—would, if our prejudices allowed us to consider it, be recognized as the lightning rod to shield us from the coming thunderbolt; but too many interests stand in the way!…Alas! Philosophy will not change the course of events: destiny will fulfill itself regardless of prophecy. Besides, must not justice be done and our education be finished?

Property is robbery! What a revolution in human ideas! Proprietor and robber have been at all times expressions as contradictory as the beings whom they designate are hostile; all languages have perpetuated this opposition. On what authority, then, do you venture to attack universal consent and give the lie to the human race? Who are you, that you should question the judgment of the nations and the ages?

Of what consequence to you, reader, is my obscure individuality? I live, like you, in a century in which reason submits only to fact and to evidence. My name, like yours, is truth seeker. 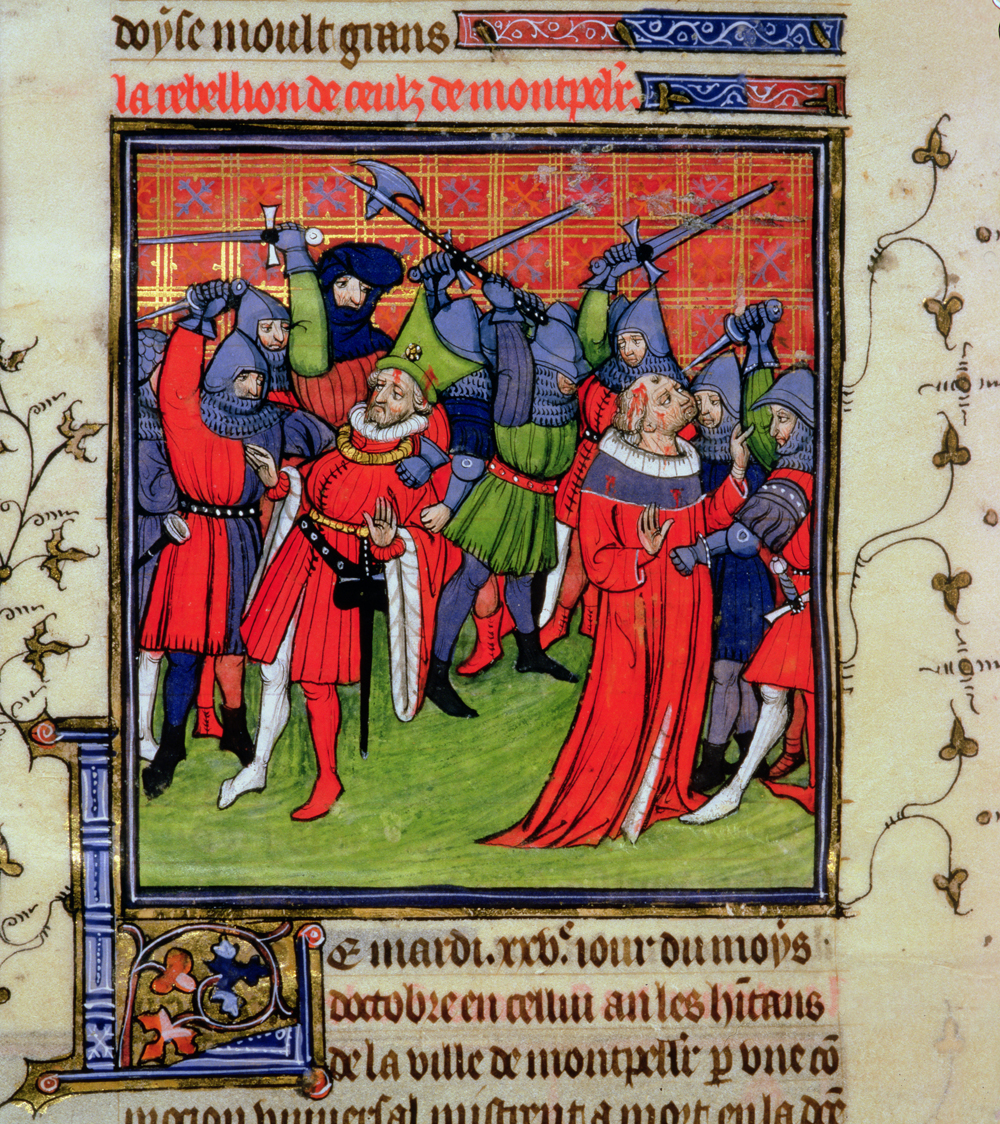 Peasant revolt in 1379 at Montepellier, in which various high officers of the duke of Anjou were killed, illumination from The Chronicles of St. Denis, late fourteenth century. British Library Board, The Bridgeman Art Library.

The things of which I am to speak are so simple and clear that you will be astonished at not having perceived them before, and you will say, “I have neglected to think.” Others offer you the spectacle of genius wresting nature’s secrets from her and unfolding before you her sublime messages; you will find here only a series of experiments upon justice and right, a sort of verification of the weights and measures of your conscience. The operations shall be conducted under your very eyes; and you shall weigh the result.

Nevertheless, I build no system. I ask an end to privilege, the abolition of slavery, equality of rights, and the reign of law. Justice, nothing else; that is the alpha and omega of my argument: to others I leave the business of governing the world.

One day I asked myself, Why is there so much sorrow and misery in society? Must man always be wretched? And not satisfied with the explanations given by the reformers—these attributing the general distress to governmental cowardice and incapacity, those to conspirators and uprisings, still others to ignorance and general corruption—and weary of the interminable quarrels of the tribune and the press, I sought to fathom the matter myself. I have consulted the masters of science; I have read a hundred volumes of philosophy, law, political economy, and history: would to God that I had lived in a century in which so much reading had been useless! I have made every effort to obtain exact information, comparing doctrines, replying to objections, continually constructing equations and reductions from arguments, and weighing thousands of syllogisms in the scales of the most rigorous logic. In this laborious work, I have collected many interesting facts that I shall share with my friends and the public as soon as I have leisure. But I must say that I recognized at once that we had never understood the meaning of these words, so common and yet so sacred: justice, equity, liberty; that concerning each of these principles our ideas have been utterly obscure; and, in fact, that this ignorance was the sole cause both of the poverty that devours us and of all the calamities that have ever afflicted the human race.

Yes: all men believe and repeat that equality of conditions is identical with equality of rights; that property and robbery are synonymous terms; that every social advantage accorded, or rather usurped, in the name of superior talent or service, is iniquity and extortion. All men in their hearts, I say, bear witness to these truths; they need only to be made to understand it.

From What is Property? In this work, his first, Proudhon drew a distinction between possessions—a carpenter’s tools, a farmer’s land—and property, wherein through the ownership of the means of production one extracts profit from another’s labor. Karl Marx attacked his beliefs in The Poverty of Philosophy, published in 1847, and one year later Proudhon was elected to France’s Constituent Assembly. He wrote The General Idea of the Revolution in the Nineteenth Century while in prison for criticizing Louis-Napoleon.

Karl Marx on the materials of production.More