Magnificence seems to be a virtue concerned with wealth; but it does not, like liberality, extend to all the actions that are concerned with wealth, but only to those that involve expenditure; and in these it surpasses liberality in scale. For, as the name itself suggests, it is a fitting expenditure involving largeness of scale. But the scale is relative; for the expense of equipping a trireme is not the same as that of heading a sacred embassy.

It is what is fitting then in relation to the agent, and to the circumstances and the object. The man who in small or middling things spends according to the merits of the case is not called magnificent (for example, the man who can say, “Many a gift I gave the wanderer”), but only the man who does so in great things. For the magnificent man is liberal, but the liberal man is not necessarily magnificent. The deficiency of this state of character is called niggardliness, the excess vulgarity, lack of taste, and the like, which do not go to excess in the amount spent on right objects, but by showy expenditure in the wrong circumstances and the wrong manner.

The magnificent man is like an artist; for he can see what is fitting and spend large sums tastefully. Such, therefore, are also his results; for thus there will be a great expenditure and one that is fitting to its result. Therefore the result should be worthy of the expense, and the expense should be worthy of the result, or should even exceed it. And the magnificent man will spend such sums for honor’s sake; for this is common to the virtues. And further he will do so gladly and lavishly; for nice calculation is a niggardly thing. And he will consider how the result can be made most beautiful and most becoming rather than for how much it can be produced and how it can be produced most cheaply. It is necessary then that the magnificent man be also liberal. For the liberal man also will spend what he ought and as he ought; and it is in these matters that the greatness implied in the name of the magnificent man—his bigness, as it were—is manifested, since liberality is concerned with these matters; and at an equal expense he will produce a more magnificent work of art. For a possession and a work of art have not the same excellence. The most valuable possession is that which is worth most—gold, for example—but the most valuable work of art is that which is great and beautiful (for the contemplation of such a work inspires admiration, and so does magnificence); and a work has an excellence—namely, magnificence—which involves magnitude. Magnificence is an attribute of expenditures of the kind which we call honorable, for example, those connected with the gods—votive offerings, buildings, and sacrifices—and similarly with any form of religious worship, and all those that are proper objects of public-spirited ambition, as when people think they ought to equip a chorus or a trireme, or entertain the city in a brilliant way. But in all cases, as has been said, we have regard to the agent as well and ask who he is and what means he has; for the expenditure should be worthy of his means, and suit not only the result but also the producer. Hence a poor man cannot be magnificent, since he has not the means with which to spend large sums fittingly; and he who tries is a fool, since he spends beyond what can be expected of him and what is proper, but it is right expenditure that is virtuous. But great expenditure is becoming to those who have suitable means to start with, acquired by their own efforts or from ancestors or connections, and to people of high birth or reputation, and so on; for all these things bring with them greatness and prestige. Primarily then the magnificent man is of this sort, and magnificence is shown in expenditures of this sort, as has been said; for these are the greatest and most honorable. Of private occasions of expenditure the most suitable are those that take place once for all, for example, a wedding or anything of the kind, or anything that interests the whole city or the people of position in it, and also the receiving of foreign guests and the sending of them on their way, and gifts and countergifts; for the magnificent man spends not on himself but on public objects, and gifts bear some resemblance to votive offerings. A magnificent man will also furnish his house suitably to his wealth (for even a house is a sort of public ornament), and will spend by preference on those works that are lasting (for these are the most beautiful), and on every class of things he will spend what is becoming; for the same things are not suitable for gods and for men, nor in a temple and in a tomb. And since each expenditure may be great of its kind, and what is most magnificent absolutely is great expenditure on a great object, but what is magnificent here is what is great in these circumstances, and greatness in the work differs from greatness in the expense (for the most beautiful ball or bottle is magnificent as a gift to a child, but the price of it is small and mean)—therefore it is characteristic of the magnificent man, whatever kind of result he is producing, to produce it magnificently (for such a result is not easily surpassed) and to make it worthy of the expenditure. 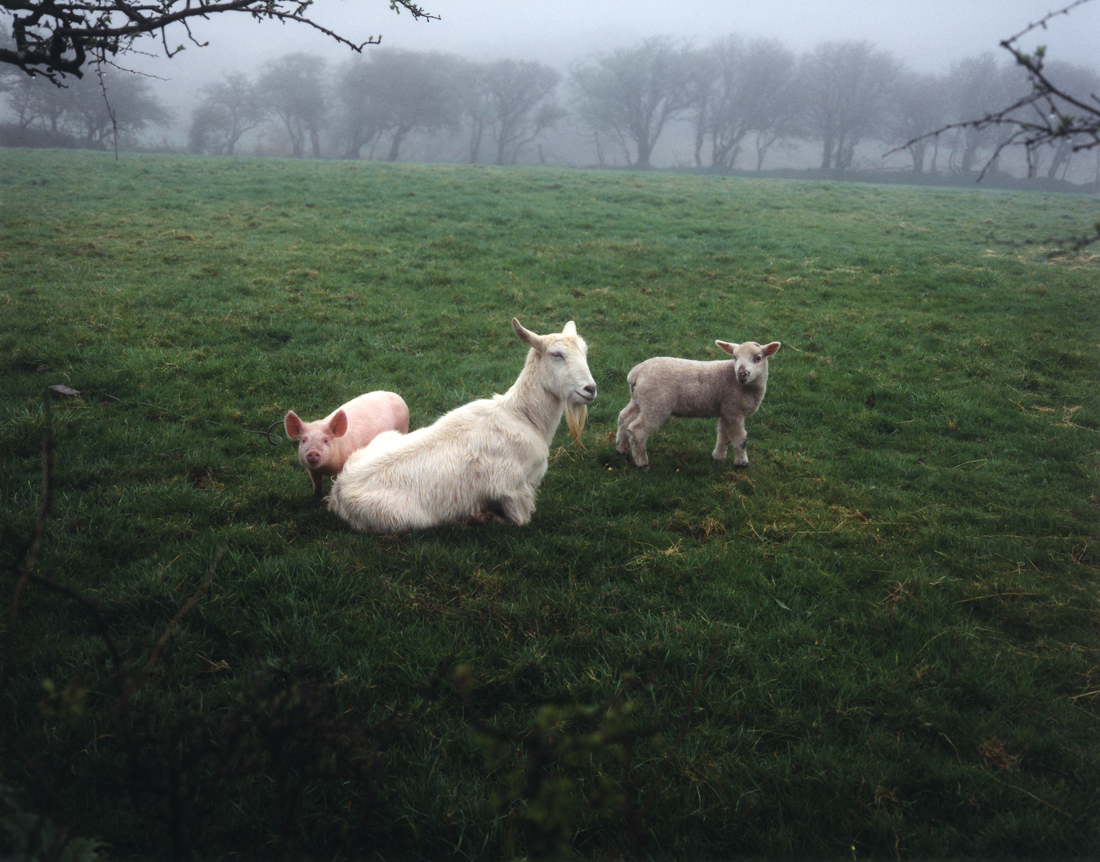 The Pig, the Lamb, and the Goat, by Jem Southam, 1989. © Jem Southam, courtesy the Robert Mann Gallery, New York

Such then is the magnificent man; the man who goes to excess and is vulgar exceeds, as has been said, by spending beyond what is right. For on small objects of expenditure he spends much and displays a tasteless showiness; for example, he gives a club dinner on the scale of a wedding banquet, and when he provides the chorus for a comedy he brings them onto the stage in purple, as they do at Megara. And all such things he will do not for honor’s sake but to show off his wealth, and because he thinks he is admired for these things, and where he ought to spend much he spends little and where little, much. The niggardly man on the other hand will fall short in everything, and after spending the greatest sums will spoil the beauty of the result for a trifle, and whatever he is doing he will hesitate and consider how he may spend least, and lament even that, and think he is doing everything on a bigger scale than he ought.

From Nicomachean Ethics. Born in 384 BC in Macedonia, Aristotle was the son of the court physician to King Amyntas III. He most likely composed the Nicomachean Ethics—presumably named after his son Nicomachus—while a member of Plato’s Academy in Athens. In 342 BC he returned to Macedonia to tutor the thirteen-year-old grandson of his father’s employer; this student would later become known as Alexander the Great. Aristotle died at the age of sixty-three of a digestive ailment.

“To banish imperfection is to destroy expression.”More