Faustus: Settle thy studies, Faustus, and begin
To sound the depth of that thou wilt profess:
Having commenced, be a divine in show,
Yet level at the end of every art,
And live and die in Aristotle’s works.
Sweet analytics, ’tis thou hast ravished me!
Bene disserere est finis logices.
Is, to dispute well, logic’s chiefest end?
Affords this art no greater miracle?
Then read no more; thou hast attained that end:
A greater subject fitteth Faustus’ wit:
Bid economy farewell, Galen come:
Seeing Ubi desinit Philosophus, ibi incipit Medicus:
Be a physician, Faustus; heap up gold,
And be eternized for some wondrous cure.
Summum bonum medicinae sanitas,
The end of physic is our body’s health.
Why, Faustus, hast thou not attained that end?
Is not thy common talk sound aphorisms?
Are not thy bills hung up as monuments,
Whereby whole cities have escaped the plague,
And thousand desperate maladies been eased?
Yet art thou still but Faustus, and a man.
Couldst thou make men to live eternally,
Or, being dead, raise them to life again,
Then this profession were to be esteemed.
Physic, farewell! Where is Justinian? [reads]
Si una eademque res legatur duobus, alter rem,
Alter valorem rei, etc.
A pretty case of paltry legacies! [reads]
Exhereditare filium non potest pater nisi, etc.
Such is the subject of the Institute,
And universal body of the law.
This study fits a mercenary drudge,
Who aims at nothing but external trash;
Too servile and illiberal for me.
When all is done, divinity is best:
Jerome’s Bible, Faustus; view it well. [reads]
Stipendium peccati mors est: Ha! Stipendium, etc.
The reward of sin is death: that’s hard.
Si peccasse negamus, fallimur, et nulla est in nobis veritas;
If we say that we have no sin, we deceive our-
selves, and there is no truth in us. Why, then,
Belike we must sin, and so consequently die:
Ay, we must die an everlasting death.
What doctrine call you this, Che sera, sera,
What will be shall be? Divinity, adieu!
These metaphysics of magicians
And necromantic books are heavenly;
Lines, circles, scenes, letters, and characters;
Ay, these are those that Faustus most desires.
O, what a world of profit and delight,
Of power, of honor, of omnipotence,
Is promised to the studious artisan!
All things that move between the quiet poles
Shall be at my command: emperors and kings
Are but obeyed in their several provinces,
Nor can they raise the winds or rend the clouds;
But his dominion that exceeds in this,
Stretcheth as far as doth the mind of man;
A sound magician is a mighty god:
Here, Faustus, tire thy brains to gain a deity. [enter Wagner]
Wagner, commend me to my dearest friends,
The German Valdes and Cornelius;
Request them earnestly to visit me.

Faustus: Their conference will be a greater help to me
Than all my labors, plod I never so fast.

Good Angel: O, Faustus, lay that damned book aside,
And gaze not on it lest it tempt thy soul,
And heap God’s heavy wrath upon thy head!
Read, read the Scriptures: that is blasphemy.

Evil Angel: Go forward, Faustus, in that famous art,
Wherein all Nature’s treasure is contained:
Be thou on earth as Jove is in the sky,
Lord and commander of these elements.

Faustus: How am I glutted with conceit of this!
Shall I make spirits fetch me what I please,
Resolve me of all ambiguities,
Perform what desperate enterprise I will?
I’ll have them fly to India for gold,
Ransack the ocean for orient pearl,
And search all corners of the newfound world
For pleasant fruits and princely delicates;
I’ll have them read me strange philosophy,
And tell the secrets of all foreign kings;
I’ll have them wall all Germany with brass,
And make swift Rhine circle fair Wertenberg;
I’ll have them fill the public schools with silk,
Wherewith the students shall be bravely clad;
I’ll levy soldiers with the coin they bring,
And chase the prince of Parma from our land,
And reign sole king of all the provinces;
Yea, stranger engines for the brunt of war,
Than was the fiery keel at Antwerp’s bridge,
I’ll make my servile spirits to invent. [enter Valdes and Cornelius]
Come, German Valdes and Cornelius,
And make me blest with your sage conference.
Valdes, sweet Valdes, and Cornelius,
Know that your words have won me at the last
To practice magic and concealed arts:
Yet not your words only, but mine own fantasy,
That will receive no object; for my head
But ruminates on necromantic skill.
Philosophy is odious and obscure;
Both law and physic are for petty wits;
Divinity is basest of the three,
Unpleasant, harsh, contemptible, and vile:
’Tis magic, magic, that hath ravished me.
Then, gentle friends, aid me in this attempt;
And I, that have with concise syllogisms
Graveled the pastors of the German church,
And made the flowering pride of Wertenberg
Swarm to my problems, as the infernal spirits
On sweet Musaeus when he came to hell,
Will be as cunning as Agrippa was,
Whose shadow made all Europe honor him.

Valdes: Faustus, these books, thy wit, and our experience,
Shall make all nations to canonize us.
As Indian Moors obey their Spanish lords,
So shall the spirits of every element
Be always serviceable to us three;
Like lions shall they guard us when we please;
Like Almain Rutters with their horsemen’s staves,
Or Lapland giants, trotting by our sides;
Sometimes like women, or unwedded maids,
Shadowing more beauty in their airy brows
Than have the white breasts of the Queen of Love:
From Venice shall they drag huge argosies,
And from America the golden fleece
That yearly stuffs old Philip’s treasury;
If learned Faustus will be resolute.

Faustus: Valdes, as resolute am I in this,
As thou to live: therefore object it not.

Cornelius: The miracles that magic will perform
Will make thee vow to study nothing else.
He that is grounded in astrology,
Enriched with tongues, well seen in minerals,
Hath all the principles magic doth require:
Then doubt not, Faustus, but to be renowned,
And more frequented for this mystery
Than heretofore the Delphian Oracle.
The spirits tell me they can dry the sea,
And fetch the treasure of all foreign wrecks,
Ay, all the wealth that our forefathers hid
Within the massy entrails of the earth:
Then tell me, Faustus, what shall we three want?

Faustus: Nothing, Cornelius! Oh, this cheers my soul!
Come, show me some demonstrations magical,
That I may conjure in some lusty grove,
And have these joys in full possession.

From The Tragicall History of Doctor Faustus. Marlowe’s play is believed to be the first dramatization of the Faust legend. Queen Elizabeth’s Privy Council quelled the worries of Cambridge University in 1587 over Marlowe’s absences, stating that he was employed in “matters touching the benefit of his country”; it is the earliest record of his clandestine government service. Around the same time, his first play, Dido, Queen of Carthage, was performed. He died at the age of twenty-nine, from a stab wound received in a tavern, in 1593. 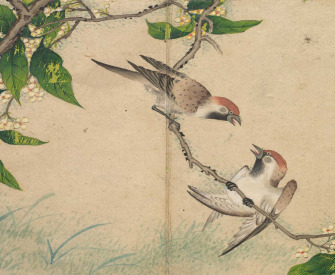