The seizure of the means of production by society puts an end to commodity production and therewith to the domination of the product over the producer. Anarchy in social production is replaced by conscious organization on a planned basis. The struggle for individual existence comes to an end. And at this point, in a certain sense, man finally cuts himself off from the animal world, leaves the condition of animal existence behind him, and enters conditions which are really human.

The conditions of existence forming man’s environment, which up to now have dominated man, who now for the first time becomes the real conscious master of nature, because and insofar as he has become master of his own social organization. The laws of his own social activity, which have hitherto confronted him as external, dominated laws of nature, will then be applied by man with complete understanding, and hence will be dominated by man. Men’s own social organization, which has hitherto stood in opposition to them as if arbitrarily decreed by nature and history will then become the voluntary act of men themselves. The objective, external forces which have hitherto dominated history, will then pass under the control of men themselves. It is only from this point that men, with full consciousness, will fashion their own history; it is only from this point that the social causes set in motion by men will have, predominantly and in constantly increasing measure, the effects willed by men. It is humanity’s leap from the realm of necessity into the realm of freedom. To carry through this world-emancipating act is the historical mission of the modern proletariat. And it is the task of scientific socialism, the theoretical expression of the proletarian movement, to establish the historical conditions and with these the nature of this act, and thus to bring to the consciousness of the now-oppressed class the conditions and nature of the act which it is its destiny to accomplish.

From Anti-Dühring. This book derives its title from Eugen Dühring, a prominent socialist of the time whom Engels attacked for his inability to grasp the historical dialectic and the economic basis of politics. Engels became a communist in 1842, published The Condition of the Working Classes in England in 1844, and coauthored The Communist Manifesto with Karl Marx in 1848. After the latter’s death in 1883, Engels published the last two volumes of Capital. 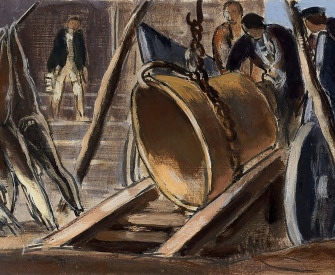