Folk dare to claim, as untrue tidings, that an outpost has been discovered that goes by the name of Luilekkerland. Until now this land was unknown to all except those rogues and rascals who first discovered it. It is situated right in the middle of North Hommelen, cater-corner to this region and close by the gallows, three miles traveling through long nights. All those wishing to go there must be completely fearless and have a penchant for intrepid exploits, for the entrance to this land is formed by a very high and very wide mountain of buckwheat porridge, all of three miles thick, which visitors must eat their way through in order to gain entrance. Then, however, they immediately find themselves in the aforementioned Luilekkerland, whose splendid riches, magnificence, and delights make it very well-known and even renowned, especially among miscreants and all those who have turned their backs on honor and virtue.

All the houses there are normally roofed with delicious pancakes and custard tarts, the walls are made of pancakes with bacon, the beams of suckling pigs, the doors and windows of sugar cakes, and the doorposts and window frames of very spicy gingerbread nailed together with cloves. Around every house stands a strong fence woven of fried liverwurst, mettwurst, or other kinds of sausage. Also to be found in that country are a great many fine fountains spouting malmsey wine and all manner of sweet drinks, which flow by themselves into the mouths of all who wish to partake of them. Meat pies grow there in the same way as pine cones do in this country.

Tarts grow there on the oak trees and pancakes grow on birches, and anyone who’s hungry, or just feels like it, can easily pluck them, for they hang low down in the trees. On the ash trees grow delicious pies. Sweet grapes may be plucked from the hawthorn, and cooking pears also grow in plentiful supply: they are very soft and extremely delicious, and when it snows in the winter they are sprinkled with sugar from the sky above.

Moreover, on the shores of the rivers there are willows on which white bread grows in abundance, and the rivers beneath these trees flow with sweet milk. The white bread constantly falls into their currents, so that all may eat to their hearts’ content. There are also fish swimming in the water, all of which are wonderfully prepared: boiled, roasted, or grilled to perfection. And they swim so close to the shore that they may be caught with one’s hand.

Whatsoever was the father of a disease, an ill diet was the mother.

Chickens, geese, pigeons, snipe, and other fowl, all of them already roasted, fly just as obligingly over the whole country. And those people who are famished but too lazy to catch them just have to open their mouths, and these roasted fowl fly right in by themselves. Roast chickens, in any case, are not much valued there, for people simply throw them over the fence. Pigs thrive to such an extent that they walk around in the fields already roasted, with a knife stuck in their back. If one feels like taking a bite, one can straightaway slice off a piece of meat and stick the knife back in again. And there are just as many gooseberries lying around on the ground as stones.

Furthermore, farmers and farm workers grow everywhere on trees, just like plums do in this country. And when the weather is fine, they ripen quickly—one after another and each at the right time—and fall off the tree right into a pair of perfect-fitting boots, standing ready on the ground. Those who own a horse get rich quickly, considering that horses there can lay a huge basket of eggs in no time. Likewise the donkeys shit nothing but sweet figs, the dogs nutmeg, and the cows and oxen green pancakes.

Those who feel like eating cherries don’t need to climb very high to pick them, for they grow as close to the ground as blackberries. Moreover, they’re huge and as sweet as any kind of sugar. There are no hard pits in them either, but only a round, soft little stone that melts in one’s mouth. In truth, one could easily imagine it to be a sugared almond.

The winters in this country are just as pleasant and agreeable as the summers, for when it hails, sugared almonds fall from the sky, and the snow is nothing other than powdered sugar, which falls in abundance over the streets and fields, where folk then gather it up and eat it. Whenever it storms or there’s a strong wind, a delicious smell settles over the land that seems to come from violets, even in the dead of winter. 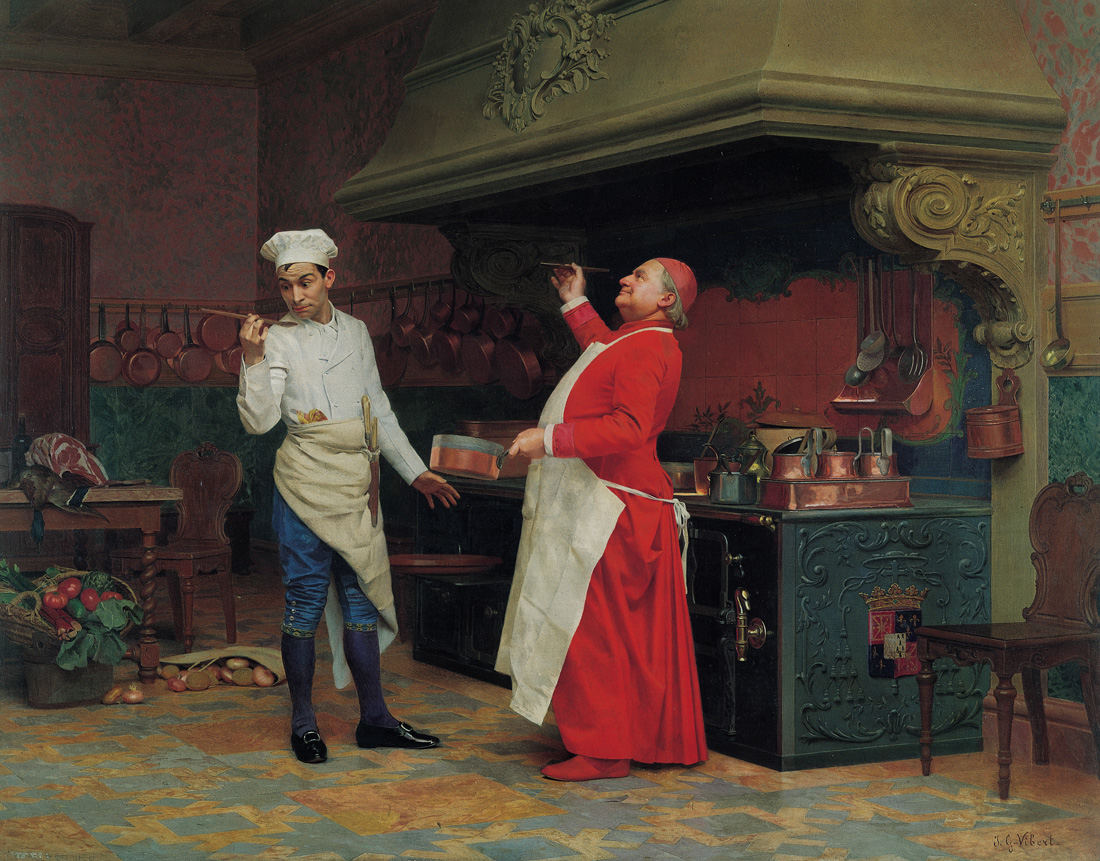 People in that country who are fond of drinking with trusted comrades receive for each fair-sized drink a silver penny. Those who drink till it’s coming out of their ears, or till their eyes start to water, receive a guinea for every drink they’ve imbibed. And anyone who can empty a whole tankard in one gulp, standing up and without taking a breath, gets free drinks and a gold noble to boot. Bullies who tease and torment honest folk earn two shillings a day. Liars also earn good money there, for every lie earns them a crown, and the more skillful they are at lying and the more artful their lies, the more they earn.

Loose women are highly thought of in that country, and the more wanton and frolicsome they are, the more they’re loved. Even though it’s said that lecherous whores are expensive to keep, this is certainly not the case in that land, where all sensual pleasures are readily available and at no cost whatsoever. One only has to say, or even just to think: mouth, what do you want? Heart, what do you desire?

From Various Agreeable Poems, Plays, and Refrains. Luilekkerland is thought to derive from an earlier and more famous conception of a mythical land of plenty known as Cockaigne. Pieter Bruegel the Elder took it as the subject for a painting from 1567, showing three bloated men sprawled out in the foreground, beneath a food-laden table encircling a tree, while a knight peers out from a lean-to whose roof is covered with pies and pastries.

Kronos tries to eat his offspring.More