Once upon a time there lived a woman who had one son whom she loved dearly. The little cottage in which they dwelled was built on the outskirts of a forest, and as they had no neighbors, the place was very lonely, and the boy was kept at home by his mother to bear her company.

They were sitting together on a winter’s evening when a storm suddenly sprang up, and the wind blew the door open. The woman started and shivered and glanced over her shoulder as if she half expected to see some horrible thing behind her. “Go and shut the door,” she said hastily to her son, “I feel frightened.”

“Frightened?” repeated the boy. “What does it feel like to be frightened?”

“Well—just frightened,” answered the mother. “A fear of something, you hardly know what, takes hold of you.”

“It must be very odd to feel like that,” replied the boy. “I will go through the world and seek fear till I find it.” And the next morning, before his mother was out of bed, he had left the forest behind him.

After walking for some hours, he reached a mountain, which he began to climb. Near the top, in a wild and rocky spot, he came upon a band of fierce robbers, sitting around a fire. The boy, who was cold and tired, was delighted to see the bright flames, so he went up to them and said, “Good greeting to you, sirs,” and wriggled himself in between the men, till his feet almost touched the burning logs.

The robbers stopped drinking and eyed him curiously, and at last the captain spoke.

“No caravan of armed men would dare to come here, even the very birds shun our camp, and who are you to venture in so boldly?”

“Oh, I have left my mother’s house in search of fear. Perhaps you can show it to me?”

“Fear is wherever we are,” answered the captain.

“But where?” asked the boy, looking around. “I see nothing.”

“Take this pot and some flour and butter and sugar over to the churchyard that lies down there, and bake us a cake for supper,” replied the robber. And the boy, who was by this time quite warm, jumped up cheerfully and, slinging the pot over his arm, ran down the hill.

When he got to the churchyard, he col­lected some sticks and made a fire; then he filled the pot with water from a little stream close by, and mixing the flour and butter and sugar together, he set the cake on to cook. It was not long before it grew crisp and brown, and then the boy lifted it from the pot and placed it on a stone, while he put out the fire. At that moment a hand was stretched from a grave, and a voice said, “Is that cake for me?”

“Do you think I am going to give to the dead the food of the living?” replied the boy, with a laugh. And giving the hand a tap with his spoon and picking up the cake, he went up the mountainside, whistling merrily.

“Well, have you found fear?” asked the robbers when he held out the cake to the captain.

“No. Was it there?” answered the boy. “I saw nothing but a hand that came from a grave and belonged to someone who wanted my cake, but I just rapped the fingers with my spoon and said it was not for him, and then the hand vanished. Oh, how nice the fire is!” And he flung himself on his knees before it and so did not notice the glances of surprise cast by the robbers at each other.

“There is another chance for you,” said one at length. “On the other side of the mountain lies a deep pool. Go to that, and perhaps you may meet fear on the way.”

“I hope so, indeed,” answered the boy. And he set out at once.

He soon beheld the waters of the pool gleaming in the moonlight, and as he drew near, he saw a tall swing standing just over it, and in the swing a child was seated, weeping bitterly.

“That is a strange place for a swing,” thought the boy, “but I wonder what he is crying about.” And he was hurrying on toward the child when a maiden ran up and spoke to him.

“I want to lift my little brother from the swing,” cried she, “but it is so high above me that I cannot reach. If you will get closer to the edge of the pool and let me mount on your shoulder, I think I can reach him.” 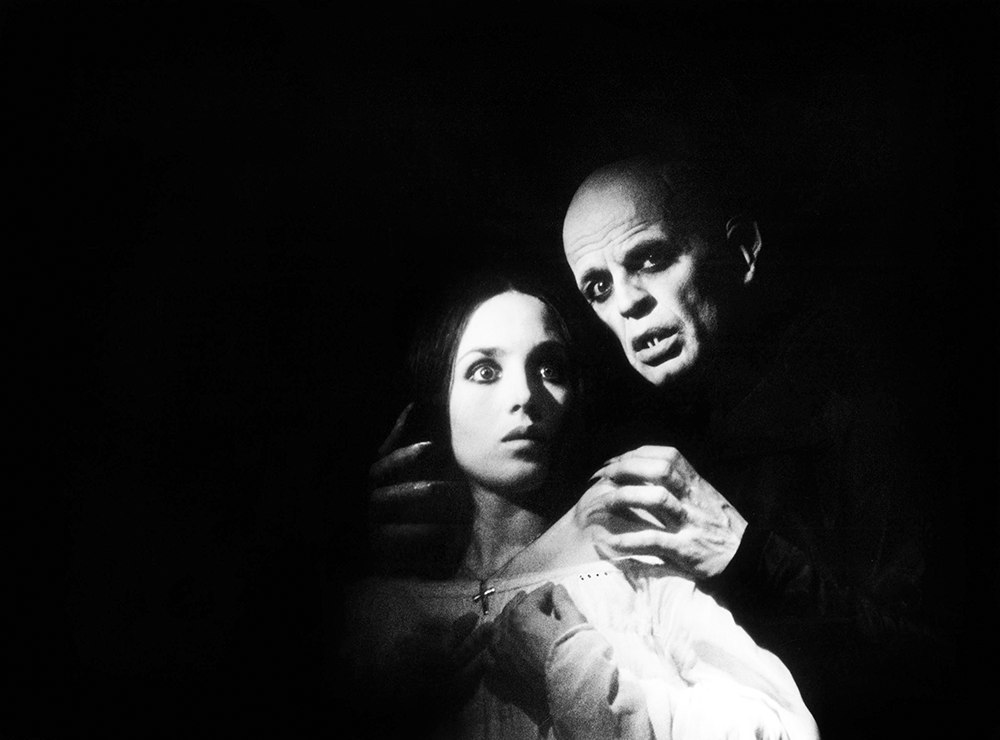 Isabelle Adjani and Klaus Kinski in a scene from Nosferatu the Vampyre, directed by Werner Herzog, 1979. © Bridgeman Images.

“Willingly,” replied the boy, and in an instant the girl had climbed to his shoulders. But instead of lifting the child from the swing, as she could easily have done, she pressed her feet so firmly on either side of the youth’s neck that he felt that in another minute he would be choked, or else fall into the water beneath him. So gathering up all his strength, he gave a mighty heave, and threw the girl backward.

Wandering he knew not where, the youth found himself on the seashore. At a little distance was a ship that had struck on a hidden rock and was rapidly sinking, while on deck the crew was gathered, with faces white as death, shrieking and wringing their hands.

“Have you met with fear?” shouted the boy. And the reply came above the noise of the waves.

Then the boy flung off his clothes and swam to the ship, where many hands were held out to draw him on board.

“The ship is tossed hither and thither and will soon be sucked down,” cried the crew again. “Death is very near, and we are frightened!”

“Give me a rope,” said the boy in reply, and he took it and made it safe around his body at one end, and to the mast at the other, and sprang into the sea. Down he went, down, down, down, till at last his feet touched the bottom, and he stood up and looked about him. There, sure enough, a mermaid with a wicked face was tugging hard at a chain that she had fastened to the ship with a grappling iron and was dragging it bit by bit beneath the waves. Seizing her arms in both his hands, he forced her to drop the chain, and the ship above remaining steady, the sailors were able gently to float her off the rock. Then taking a rusty knife from a heap of seaweed at his feet, he cut the rope around his waist and fastened the mermaid firmly to a stone, so that she could do no more mischief, and bidding her farewell, he swam back to the beach, where his clothes were still lying.

On and on walked the youth, but fear never crossed his path, and one day he entered a large town, where all the streets and squares were so full of people, he could hardly pass between them.

“Why are these crowds gathered together?” he asked of a man who stood next to him.

“The ruler of this country is dead,” was the reply, “and as he had no children, it is necessary to choose a successor. Therefore, each morning one of the sacred pigeons is let loose from the tower yonder, and on whomsoever the bird shall perch, that man is our king. In a few minutes the pigeon will fly. Wait and see what happens.”

Every eye was fixed on the tall tower that stood in the center of the chief square, and the moment that the sun was seen to stand straight over it, a door was opened and a beautiful pigeon, gleaming with pink and gray, blue and green, came rushing through the air. Onward it flew, onward, onward, till at length it rested on the head of the boy. Then a great shout arose: “The king! The king!”

As he listened to the cries, a vision, swifter than lightning, flashed across his brain. He saw himself seated on a throne, spending his life trying, and never succeeding, to make poor people rich; miserable people happy; bad people good; never doing anything he wished to do, not able even to marry the girl that he loved.

Fear is the foundation of most governments.

“No! No!” he shrieked, hiding his face in his hands. But the crowds who heard him thought he was overcome by the grandeur that awaited him and paid no heed.

“Well, to make quite sure, let fly more pigeons,” said they, but each pigeon followed where the first had led, and the cries arose louder than ever: “The king! The king!” And as the young man heard, a cold shiver that he knew not the meaning of ran through him.

“This is fear whom you have so long sought,” whispered a voice, which seemed to reach his ears alone. And the youth bowed his head as the vision once more flashed before his eyes, and he accepted his doom and made ready to pass his life with fear beside him.

“The Boy Who Found Fear at Last.” Originally re­corded by Hungarian linguist and folklorist Ignácz Kúnos, this Turkish tale appeared in English trans­lation in 1907 in Andrew Lang’s popular Olive Fairy Book. “Like all real folklore, they are not for children, though it is the children who are most strongly attracted by them,” Kúnos wrote about the stories he collected. “They are mostly woven from the webs of fancy in that delectable realm, Fairyland, since it is there that everything wonderful happens.”