To express the matter boldly, it is as though a sexual preference becomes active at an early period, as though the boy regards his father as a rival in love, and as though the girl takes the same attitude toward her mother—a rival by getting rid of whom he or she cannot but profit.

Before rejecting this idea as monstrous, let the reader consider the actual relations between parents and children. What the requirements of culture and piety demand of this relation must be distinguished from what daily observation shows us to be the fact. More than one cause for hostile feeling is concealed within the relations between parents and children; the conditions necessary for the actuation of wishes which cannot exist in the presence of the censor are most abundantly provided. Let us dwell at first upon the relation between father and son. I believe that the sanctity which we have ascribed to the injunction of the Decalogue dulls our perception of reality. Perhaps we hardly dare to notice that the greater part of humanity neglects to obey the Fifth Commandment. In the lowest as well as in the highest strata of human society, piety toward parents is in the habit of receding before other interests. The obscure reports which have come to us in mythology and legend from the primeval ages of human society give us an unpleasant idea of the power of the father and the ruthlessness with which it was used. Kronos devours his children, as the wild boar devours the brood of the sow; Zeus emasculates his father and takes his place as a ruler. The more despotically the father ruled in the ancient family, the more must the son have taken the position of an enemy, and the greater must have been his impatience, as designated successor, to obtain the mastery himself after his father’s death. Even in our own middle-class family the father is accustomed to aid the development of the germ of hatred which naturally belongs to the paternal relation by refusing the son the disposal of his own destiny, or the means necessary for this. A physician often has occasion to notice that the son’s grief at the loss of his father cannot suppress his satisfaction at the liberty which he has at last obtained. Every father frantically holds on to whatever of the sadly antiquated potestas patris still remains in the society of today, and every poet who, like Henrik Ibsen, puts the ancient strife between father and son in the foreground of his fiction is sure of his effect. The causes of conflict between mother and daughter arise when the daughter grows up and finds a guardian in her mother, while she desires sexual freedom, and when, on the other hand, the mother has been warned by the budding beauty of her daughter that the time has come for her to renounce sexual claims.

All these conditions are notorious and open to everyone’s inspection. But they do not serve to explain dreams of the death of parents found in the case of persons to whom piety toward their parents has long since come to be inviolable. We are furthermore prepared by the preceding discussion to find that the death wish toward parents is to be explained by reference to earliest childhood. 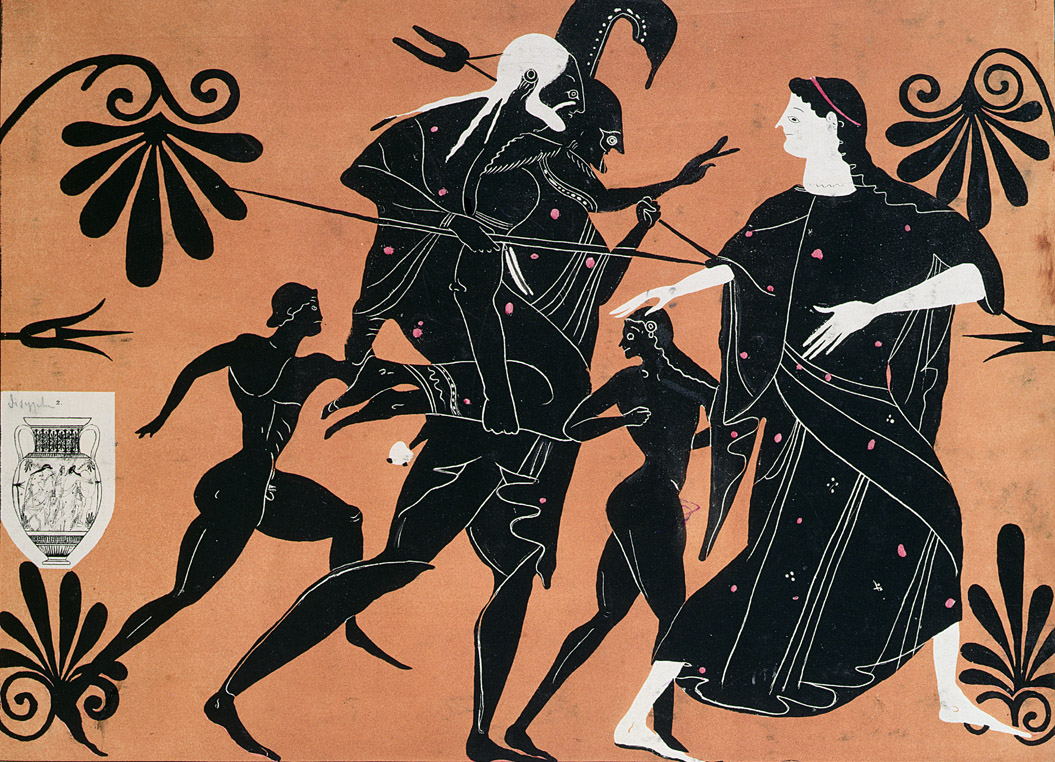 Aeneas fleeing Troy with his father Anchises on his back and sons surrounding him, nineteenth-century French lithograph after a Greek vase. © Bibliotheque des Arts Decoratifs, Paris/Archives Charmet/The Bridgeman Art Library.

According to my experience, which is now large, parents play a leading part in the infantile psychology of all later neurotics, and falling in love with one member of the parental couple and hatred of the other help to make up that fateful sum of material furnished by the psychic impulses, which has been formed during the infantile period, and which is of such great importance for the symptoms appearing in the later neurosis. But I do not think that psychoneurotics are here sharply distinguished from normal human beings, in that they are capable of creating something absolutely new and peculiar to themselves. It is far more probable, as is shown also by occasional observation upon normal children, that in their loving or hostile wishes toward their parents psychoneurotics only show in exaggerated form feelings which are present less distinctly and less intensely in the minds of most children. Antiquity has furnished us with legendary material to confirm this fact, and the deep and universal effectiveness of these legends can only be explained by granting a similar universal applicability to the above-mentioned assumption in infantile psychology.

I refer to the legend of King Oedipus and the drama of the same name by Sophocles. Oedipus, the son of Laius, king of Thebes, and of Jocasta, is exposed while a suckling, because an oracle has informed the father that his son, who is still unborn, will be his murderer. He is rescued, and grows up as the king’s son at a foreign court, until, being uncertain about his origin, he also consults the oracle and is advised to avoid his native place, for he is destined to become the murderer of his father and the husband of his mother. On the road leading away from his supposed home he meets King Laius and strikes him dead in a sudden quarrel. Then he comes to the gates of Thebes, where he solves the riddle of the Sphynx who is barring the way, and he is elected king by the Thebans in gratitude and is presented with the hand of Jocasta. He reigns in peace and honor for a long time and begets two sons and two daughters upon his unknown mother, until at last a plague breaks out which causes the Thebans to consult the oracle anew. Here Sophocles’ tragedy begins. The messengers bring the advice that the plague will stop as soon as the murderer of Laius is driven from the country. But where is he hidden?

“Where are they to be found? How shall we trace the perpetrators of so old a crime where no conjecture leads to discovery?”

The action of the play now consists merely in a revelation, which is gradually completed and artfully delayed—resembling the work of a psychoanalysis—of the fact that Oedipus himself is the murderer of Laius, and the son of the dead man and of Jocasta. Oedipus, profoundly shocked at the monstrosities which he has unknowingly committed, blinds himself and leaves his native place. The oracle has been fulfilled.

It’s frightening to think that you mark your children merely by being yourself… it seems unfair. You can’t assume the responsibility for everything you do—or don’t do.

The Oedipus Tyrannus is a so-called tragedy of fate; its tragic effect is said to be found in the opposition between the powerful will of the gods and the vain resistance of the human beings who are threatened with destruction; resignation to the will of God and confession of one’s own helplessness is the lesson which the deeply moved spectator is to learn from the tragedy. Consequently modern authors have tried to obtain a similar tragic effect by embodying the same opposition in a story of their own invention. But spectators have sat unmoved while a curse or an oracular sentence has been fulfilled on blameless human beings in spite of all their struggles; later tragedies of fate have all remained without effect.

If the Oedipus Tyrannus is capable of moving modern men no less than it moved the contemporary Greeks, the explanation of this fact cannot lie merely in the assumption that the effect of the Greek tragedy is based upon the opposition between fate and human will, but is to be sought in the peculiar nature of the material by which the opposition is shown. There must be a voice within us which is prepared to recognize the compelling power of fate in Oedipus, while we justly condemn the situations occurring in Die Ahnfrau or in other tragedies of later date as arbitrary inventions. And there must be a factor corresponding to this inner voice in the story of King Oedipus. His fate moves us only for the reason that it might have been ours, for the oracle has put the same curse upon us before our birth as upon him. Perhaps we are all destined to direct our first sexual impulses toward our mothers and our first hatred and violent wishes toward our fathers; our dreams convince us of it. King Oedipus, who has struck his father Laius dead and has married his mother Jocasta, is nothing but the realized wish of our childhood.

From The Interpretation of Dreams. Freud introduced the Oedipus complex here, in his first major work. Growing up in Vienna in the mid-1800s, Freud recalled that, owing to his classmates’ anti-Semitism, his hero was a Carthaginian general: “Hannibal and Rome symbolized as a youth the antithesis between the tenaciousness of the Jews and the organization of the Catholic Church.” The founder of psychoanalysis published Moses and Monotheism the year Adolf Hitler invaded Austria and died in London in 1939 at the age of eighty-three.

Going to the Devil

A witch who was burned confessed that she had killed more than forty children.More