On the twenty-fifth of June, we perceived at the water’s edge some human tracks and a narrow and somewhat beaten path leading to a fine meadow. We stopped to examine it, and thinking that it was a trail that led to some village of Indians, we resolved to go and reconnoiter it.

We left our two canoes under the guard of our people, strictly charging them not to allow themselves to be taken by surprise, and then Monsieur Joliet and I set off on a rather dangerous mission for two men who exposed themselves, alone, to the mercy of a barbarous and unknown people. We silently followed the narrow path, and after walking about two leagues, we discovered a village on the bank of a river and two others on a hill distant about half a league from the first. At this point, we heartily commended ourselves to God, and after imploring his aid, we went on, but no one noticed us. We approached so near that we could even hear the Indians talking. We therefore decided that it was time to reveal ourselves. Stopping and advancing no further, we began to yell as loudly as we could. On hearing the shout, the Indians quickly issued from their cabins, and having probably recognized us as Frenchmen, especially when they saw a black robe—or at least having no cause for distrust, as we were only two men and had given them notice of our arrival—they appointed four old men to come and speak to us. Two of these bore tobacco pipes, finely ornamented and adorned with various feathers. They walked slowly and raised their pipes toward the sun, seemingly offering them to it to be smoked by the sun, though they never spoke a word. It took them rather a long time to make their way to us from their village. Finally, when they had drawn near, they stopped to look at us attentively. I was reassured when I observed these ceremonies, which they perform only among friends, and much more so when I saw them clad in cloth, for I judged thereby that they were our allies. I therefore spoke to them first, asking them who they were. They replied that they were Illinois, and as a token of peace, they offered us their pipes to smoke. Afterward, they invited us to enter their village, where all the people impatiently awaited us. At the door of the cabin where we would be received stood an old man who awaited us in a rather surprising posture, which constitutes a part of the ceremony that they observe when they receive strangers. This man was standing stark naked, with his hands extended and lifted toward the sun as if he wished to protect himself from its rays, which nevertheless shone on his face through his fingers. When we came near him, he paid us this compliment: “How beautiful the sun is, O Frenchmen, when you come to visit us! All our village awaits you, and you shall enter all our cabins in peace.” Having said this, he brought us into his own cabin, where there was a crowd of people who devoured us with their eyes, though they observed a profound silence. However, we could hear these words, which were addressed to us from time to time in a low voice: “How good it is, my brothers, that you should visit us.” 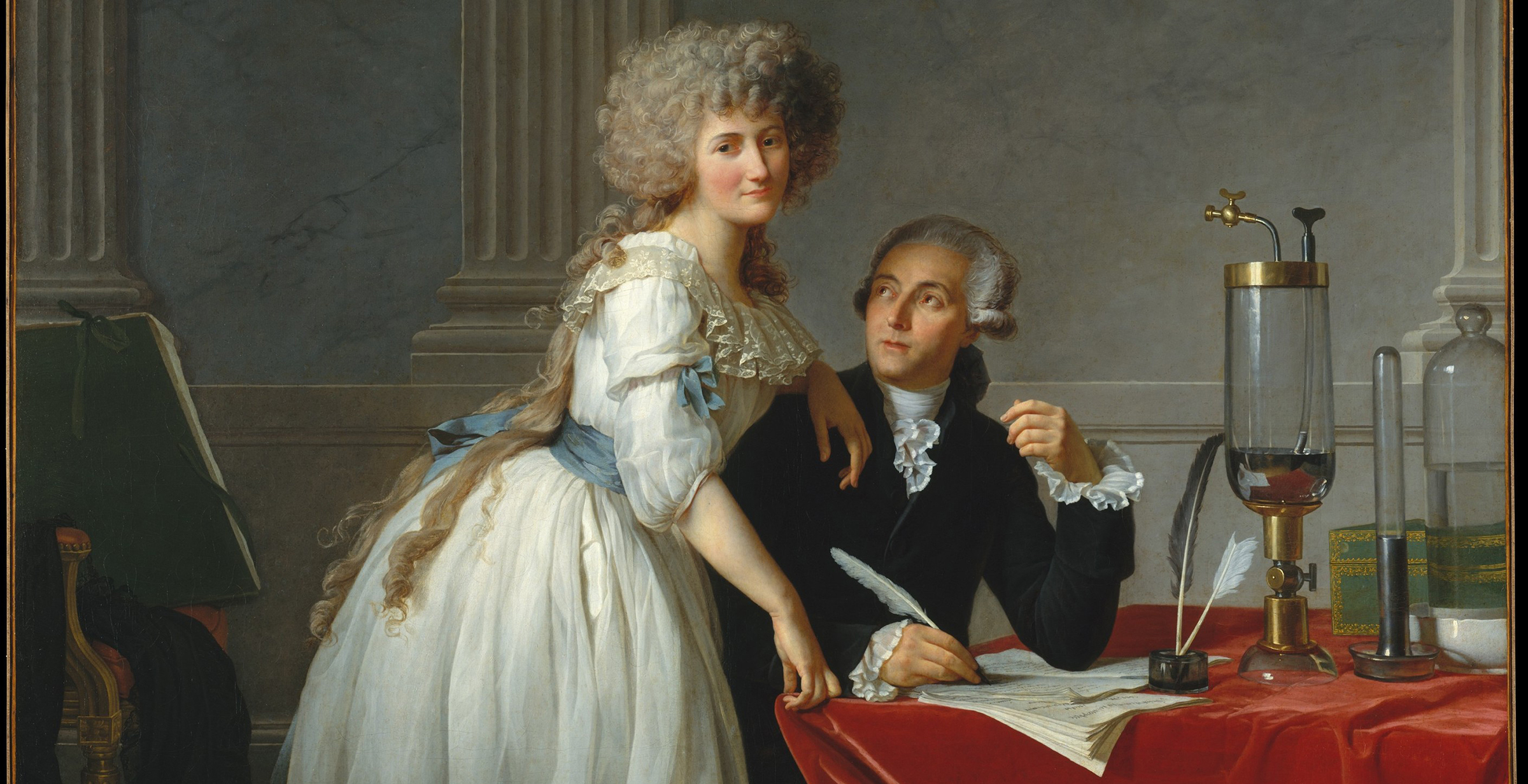 Antoine-Laurent Lavoisier and His Wife (detail), by Jacques-Louis David, 1788. The Metropolitan Museum of Art, Purchase, Mr. and Mrs. Charles Wrightsman Gift, in honor of Everett Fahy, 1977.

After we had taken our places, the usual civility of the country was paid to us, which consisted in offering us the calumet. This must not be refused, unless one wishes to be considered an enemy, or at least impolite, though it is enough to make even a pretense of smoking. After we had smoked, the assembly honored us by smoking in their turn. While they were passing the calumet, we received an invitation on behalf of the great captain of all the Illinois to proceed to his village, where he wished to hold a council with us. We went there with a large escort, for all these people, who had never seen any Frenchman among them, could not cease looking at us. They lay on the grass beside the trail; they went ahead of us and then retraced their steps to come and see us again. All this was done noiselessly and with marks of great respect for us.

When we reached the village, we saw the great captain at the entrance of his cabin standing between two old men, all three naked and holding their calumet turned toward the sun. He harangued us in a few words, congratulating us on our arrival. Afterward, he offered us his calumet and invited us to smoke as we entered his cabin, where we received all their usual kind attentions.

The captain arose, and resting his hand on the head of a little slave whom he wished to give us, he spoke thus: “I thank you, Black Robe and you, O Frenchman,” addressing Monsieur Joliet, “for having taken so much trouble to come to visit us. Never has the earth been so beautiful or the sun so bright as today. Never has our river been so calm or so clear of rocks, which your canoes have removed as they traveled. Never has our tobacco tasted so good or our corn appeared so fine as we now see them. Here is my son, whom I give you so that you will know my heart. I beg you to have pity on me and on all of my nation.” Having said this, he placed the little slave beside us and gave us a second present, in the form of a very mysterious calumet, upon which they place more value than upon a slave. By this gift, he expressed to us the esteem that he had for monsieur the governor, based on what we had told him of the latter. By a third, he begged us on behalf of all his nation not to go farther, on account of the great dangers to which we would expose ourselves.

I replied that I feared not death and that I believed there was no greater happiness than that of losing my life for the glory of Him who has made all. This is what these poor people cannot understand.

The council was followed by a great feast consisting of four dishes, each of which had to be eaten in its special way. The first course was a great wooden platter full of sagamité, that is to say, Indian cornmeal boiled in water and seasoned with fat. The master of ceremonies filled a spoon with sagamité three or four times and put it into my mouth as if I were a little child. He did the same to Monsieur Joliet. As a second course, he caused a second platter to be brought, on which there were three fish. He took some pieces of them, removed the bones, and after blowing on them to cool them, put them in our mouths as one would give food to a bird. For the third course, they brought a large dog that had just been killed, but when they learned that we did not eat this meat, they removed it from before us. Finally, the fourth course was a piece of wild ox, the fattest morsels of which were placed in our mouths.

The eternal mystery of the world is its comprehensibility.

After this feast, we had to go to visit the whole village, which consists of three hundred cabins. While we walked through the streets, an orator was continually announcing that people must not annoy us when they came to see us. Everywhere we were presented with belts, garters, and other articles made of the hair of bears and cattle dyed red, yellow, and gray. These are all the rarities they possess. As they are of no great value, we did not burden ourselves with them.

We slept in the captain’s cabin, and on the following day we took leave of him, promising to revisit his town in four moons. He conducted us to our canoes, together with nearly six hundred persons who watched us set off, giving every possible manifestation of the joy that our visit had caused them. For my own part, I promised, on bidding them adieu, that I would come the following year and reside with them to instruct them.

From On the First Voyage by Father Marquette. Marquette was sent by his Jesuit superiors on a foreign mission to Canada in 1666. After building a mission on Michigan’s Upper Peninsula, he began exploring the Mississippi River with fur trader Louis Joliet in 1673, arriving on the river in two bark canoes a week before this journal entry was written. Marquette was fluent in many American Indian languages. His manuscripts were kept in a convent in Montreal for 150 years; the first full English translation of his journal was published in 1852.