The following is the substance of the articles, as taken from the pirates’ own informations.

(1) Every man has a vote in affairs of moment; has equal title to the fresh provisions or strong liquors at any time seized, and use them at pleasure, unless a scarcity make it necessary for the good of all to vote a retrenchment.

(2) Every man to be called fairly in turn, by list, on board of prizes, because they were on these occasions allowed a shift of clothes. But if they defrauded the company to the value of a dollar in plate, jewels, or money, marooning was their punishment. If the robbery was only between one another, they contented themselves with slitting the ears and nose of him that was guilty and set him onshore not in an uninhabited place but somewhere where he was sure to encounter hardships.

(3) No person to game at cards or dice for money.

(4) The lights and candles to be put out at eight o’clock at night. If any of the crew after that hour still remained inclined for drinking, they were to do it on the open deck.

(5) To keep their piece, pistols, and cutlass clean and fit for service.

(6) No boy or woman to be allowed among them. If any man were found seducing any of the latter sex and carried her to sea disguised, he was to suffer death.

(7) To desert the ship or their quarters in battle was punished with death or marooning.

(8) No striking one another on board, but every man’s quarrels to be ended onshore, at sword and pistol.

(9) No man to talk of breaking up their way of living till each had shared a thousand pounds. If in order to do this, any man should lose a limb or become a cripple in their service, he was to have eight hundred dollars out of the public stock, and for lesser hurts proportionably.

(10) The captain and quartermaster to receive two shares of a prize; the master, boatswain, and gunner, one share and a half; and other officers, one and a quarter.

(11) The musicians to have rest on the Sabbath day, but the other six days and nights, none without special favor.

In case any doubt should arise concerning the construction of these laws, and it should remain a dispute whether the party had infringed them or no, a jury is appointed to explain them and bring in a verdict upon the case in doubt.

Since we are now speaking of the laws of this company, I shall go on and, in as brief a manner as I can, relate the principal customs and government of this roguish commonwealth, which are pretty near the same with all pirates. 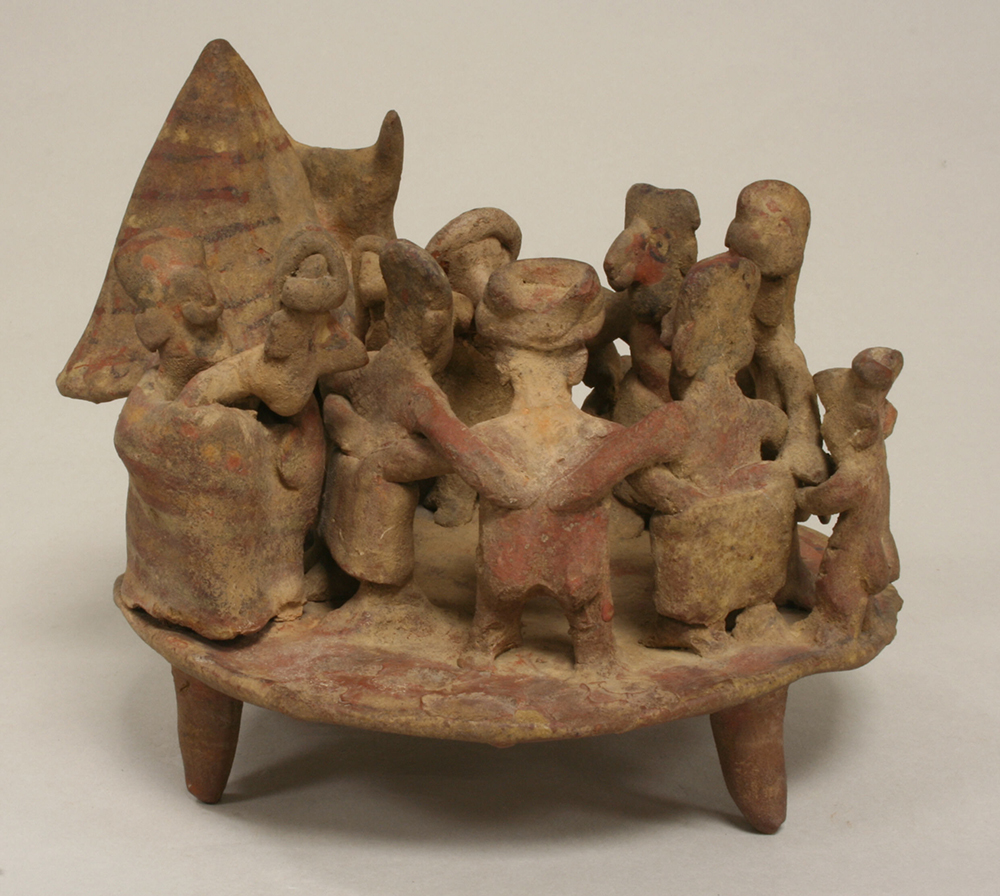 Nayarit ceramic model of a village scene, Mexico, second or third century. The Metropolitan Museum of Art, from the Collection of Nina and Gordon Bunshaft, Bequest of Nina Bunshaft, 1994.

For the punishment of small offenses, there is a principal officer among the pirates called the quartermaster, of the men’s own choosing, who claims all authority this way (except in time of battle): if they disobey his command, are quarrelsome and mutinous with one another, misuse prisoners, plunder beyond his order, and in particular, if they be negligent of their arms, which he musters at discretion, he punishes at his own arbitrament, with drubbing or whipping, which no one else dare do without incurring the lash from all the ship’s company. In short, this officer is trustee for the whole, is the first on board any prize, separating for the company’s use what he pleases and returning what he thinks fit to the owners.

After a description of the quartermaster and his duty, who acts as a sort of civil magistrate on board a pirate ship, I shall consider their military officer, the captain, and what privileges he exerts in such anarchy and unruliness of the members: why, truly very little. They only permit him to be captain on condition that they may be captain over him. They separate to his use the great cabin and sometimes vote him small parcels of plate and china, but then every man, as the humor takes him, will use the plate and china, intrude into his apartment, swear at him, seize a part of his victuals and drink if they like it, without his offering to find fault or contest it.

The rank of captain being obtained by the suffrage of the majority, it falls on one superior for knowledge and boldness and can make those fear who do not love him. Bartholomew Roberts is said to have exceeded his fellows in these respects and, when advanced, enlarged the respect that followed it by making a sort of privy council of half a dozen of the greatest bullies, such as were his competitors, and had interest enough to make his government easy. Yet even those, in the latter part of his reign, he had run counter to in every project that opposed his own opinion, for which a cabal was formed to take away his captainship, which death did more effectually.

From A General History of the Robberies and Murders of the Most Notorious Pyrates. Based on trial transcripts, newspaper reports, and interviews with sailors, this collection of pirate biographies proved wildly popular upon its publication in 1724, influencing the works of Robert Louis Stevenson and J.M. Barrie. “Charles Johnson” has long been understood to be a nom de plume, and many theories have been posed as to the author’s identity. One popular, though unsubstantiated, theory holds it to be the work of novelist and adventurer Daniel Defoe.

In eighteenth-century France, a stranger asks a favor.More