There was a man who was a great deer hunter. He was constantly hunting and was very successful. He thought continually of the deer and dreamed of them. They were as friends to him. Probably they were his manitou. He had two wives, one of whom had borne him no children while the other one had borne a male child.

One day while hunting, he came across the fresh tracks of a doe and a fawn, which he followed. They led to a knoll on which he saw a young woman and child sitting. The tracks led directly to them. He was surprised, and asked the woman if she had seen any deer pass. She answered, “No.” He walked on, but could not find the tracks. On his return, he said to the woman, “You must have seen the deer; the tracks seem to disappear where you are, and they are very fresh.” The woman laughed, and said, “You need not trouble yourself about the tracks. For a long time I have loved you and longed for you. Now you shall go with me to my house.” They walked on together, and the hunter could not resist the attraction of the woman nor help following her. As he went along, he thought, “It is not well that I am acting thus. My wives and my child are at home awaiting me.” The woman knew his thoughts at once and said, “You must not worry or think that you are doing wrong. You shall be my husband, and you will never regret it.” After the two had traveled a long way, they reached a hilly country. Then the man saw an entrance which seemed to lead under­ground. When they had gone some distance underground, they found themselves in a large house full of people who were just like Indians. They were of both sexes and all ages. They were well dressed in clothes of dressed skin, and wore deerskin robes. They seemed to be very amiable and happy. As the travelers entered, some of the people said, “Our daughter has brought her husband.” That night, the woman said to the hunter, “You are my husband and will sleep with me. You may embrace me, but you must not try to have intercourse with me. You must not do so before the rutting season. Then you may also go with my sisters. Our season comes but once a year and lasts about a month. During the rest of the year we have no sexual connections.” The hunter slept with his new wife.

On the following day the people said, “Let our son-in-law hunt. He is a great hunter. Let him get meat for us. We have no more meat.” The hunter took his bow and arrows and went hunting. Two young deer, his brothers-in-law, ran ahead and stood on a knoll. Presently the hunter saw them and killed both of them. He cut them up and carried them home, leaving nothing but their manure. The chief had told him in the morning to be careful and not to throw away any part of the game. Now the people ate and were glad. They saved all the bones and put them away in one place. They said to the hunter, “We always save every bone.” When the deer were eaten, the bones were wrapped in bundles, and the chief sent a man to throw them into the water. He carried the bones of the two deer that the hunter had killed, and of another one that the people were eating when the hunter first arrived. The hunter had missed his two brothers-in-law and thought they were away hunting. When the man who had carried the bones away returned, the two brothers-in-law and another man were with him. They had all come to life when their bones were thrown into the water. Thus these deer people lived by hunting and killing one another and then reviving. The hunter lived with his wife and her people, and hunted whenever meat was required. He never failed to kill deer, for some of the young deer were always anxious to be killed for the benefit of the people. 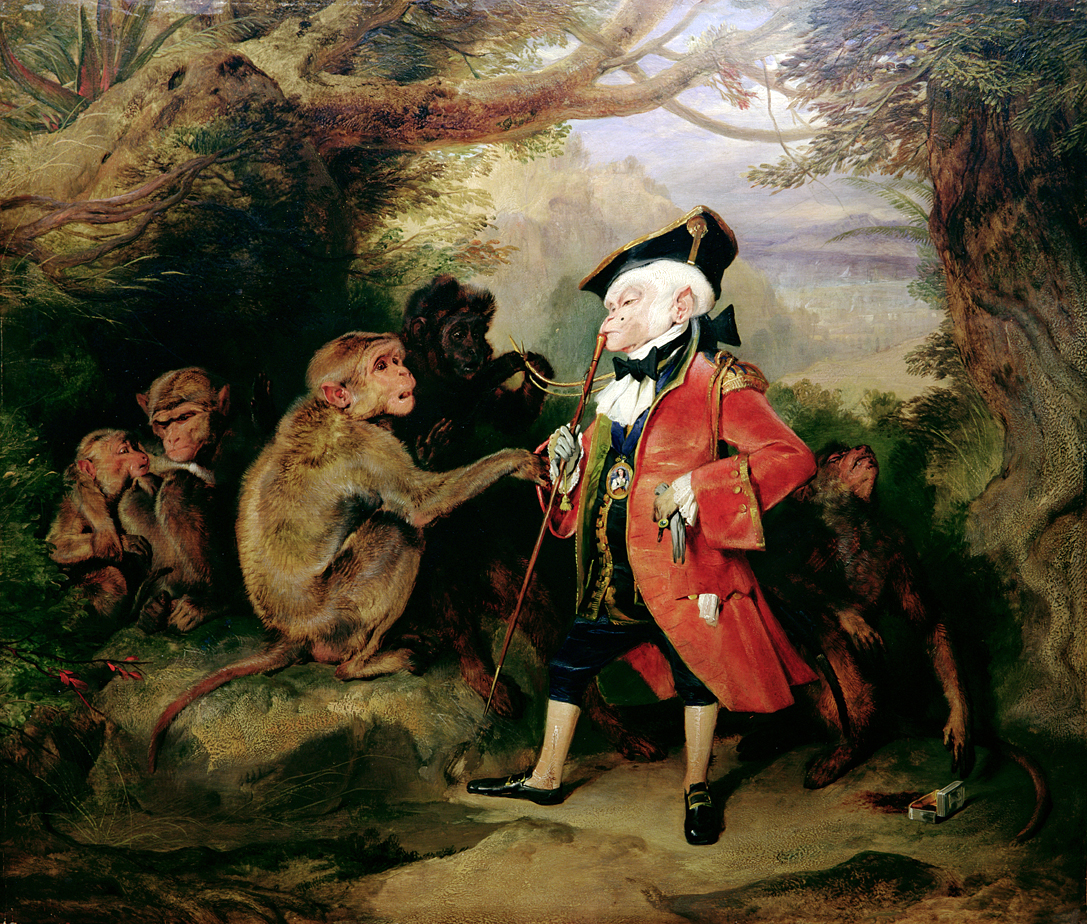 The Monkey Who Had Seen the World, by Edwin Landseer, 1827. The Guildhall Art Gallery, London, UK.

At last the rutting season came on, and the chief put the body of a large old buck on the hunter, and so transformed him into a buck. He went out with his wife and felt happy. Some other younger bucks came and beat him off and took his wife. He did not like others to have his wife; therefore he went home and felt downcast. That night the people said, “What is the matter with our son-in-law that he does not speak?” Someone said, “He is downcast because a young man took his wife.” The chief said, “Do not feel sad. We shall give you ornaments tomorrow that will make you strong, and then nobody can take your wife away from you.” On the following morning he put large antlers on him and gave him the body of a buck in its prime. That day the hunter beat off all the rival bucks and kept his wife and also all her sisters and cousins for himself. He hurt many of his brothers-in-law in fighting. The deer people had shamans who healed the wounds of those hurt in battle, and they were busy throughout the rutting season. In this way they acted until the end of the rut, and the hunter was the champion during the whole season. In due time his wife gave birth to a son. When the latter was growing up, she said, “It is not fair to your people that you live entirely with my people. We should live with them for a while.” She reduced a large quantity of deer fat to the size of a handful. She did the same with a large quantity of dried venison, deerskin, and dressed buckskin. Now she started with her child and her husband, who hunted on the way and killed one of his brothers-in-law whenever they required food. He put the bones into the water, and they revived. They traveled along as people do, but the woman thought this too slow, therefore they transformed themselves into deer. Now they went fast and soon reached the country where her husband’s people lived. She said to her husband, “Do not approach the people at once, or you will die. For eight days you must prepare yourself by washing in decoctions of herbs.” Presently they saw a young woman some distance away from the lodges. The hunter recognized her as his sister, showed himself, and called, “O sister! I have come back, but no one must come near me for eight days. After that I shall visit you, but you must clean your houses, so that there may be in them nothing old and no bad smell.” The people had thought him dead, and his childless wife had married again. After the hunter had become like other people, he entered his lodge with his new wife and his son. His wife pulled out the deer fat from under her arm and threw it down on long feast mats that had been spread out by the people. It assumed its proper dimensions and covered all the mats. She did the same with the dried meat and the deerskins, which almost filled a lodge. Now the people had a feast and felt happy and pleased. The hunter stayed with his people for a considerable time. Whenever they wanted fresh meat, he gave his bow and arrows to his son and told him to hunt. The youth always took with him his half-brother, the son of his father by his Indian wife. They killed deer, for the deer were the boy’s relatives and were willing to be killed. They threw the bones into the water, and the deer came back to life. The deer boy taught his half-brother how to hunt and shoot deer, how to hold his bow and arrows so that he would not miss, how to cut up and preserve the meat, and he admonished him always to throw the bones into the water so that the deer might revive.

Finally the deer woman said to her husband, “We have been here now for a long time. Let us return to my people.” She invited the people to accompany them, but they said they had not a sufficient number of moccasins to undertake the long journey. The woman then pulled out a parcel of dressed skins, threw it on the ground, and it became a heap of fine skins for shoes. All the women worked night and day making moccasins, and soon they were ready to start. The first day of the journey the hunter said to his wife, “Let us send our son out, and I will shoot him.” He hunted and brought home a young deer, which the people ate. They missed the deer boy, and wondered where he had gone. At night the hunter threw the bones into the water, and the boy came to life. On the next day the hunter’s wife went out, and he killed her and fed the people. They missed her and wondered where she had gone. At night he threw the bones into the water, and she came to life. She told her husband it would be better not to continue to do this, because the people were becoming suspicious and would soon discover what they were doing. She said, “After this, kill your brothers-in-law.” The people traveled slowly, for there were many, and the hunter killed deer for them every day. After many days they reached the deer people’s house. They were well received. After a time they made up their minds to return, and the deer boy said he would return with his half-brother’s people and hunt for them on the way so that they might not starve. He accompanied them to their country and never returned. He became an Indian and a great hunter. From him the people learned how to treat deer. He said to them, “When you kill deer, always see to it that the bones are not lost. Throw them into the water. Then the deer will come to life. A hunter who does this pleases the deer. They have affection for him, are not afraid of him, and do not keep out of his way, for they know that they will return to life whenever they give themselves into his power. The deer will always remain plentiful, because they are not really killed. If it is impossible to throw the bones into water, then burn them. Then the deer will really die, but they will not find fault with you. If a man throws deer bones about and takes no care of them, if he lets the dogs eat them and people step on them, then the deer will be offended and will help him no more. They will withhold themselves, and the hunter will have no luck in hunting. He will become poor and starve.” The hunter never returned to the people. He became a deer.

From Folk Tales of Salishan and Sahaptin Tribes, edited by Franz Boas. The Salish lived mainly in the Pacific Northwest as well as in present-day Idaho, Montana, and southern British Columbia. Meriwether Lewis and William Clark encountered some of its people on their expedition in 1805. A reservation for the Salish and other tribes was created in 1855 near Flathead Lake in Montana. Boas was an expert on North American Indian cultures and served as a professor of anthropology at Columbia University from 1899 to 1942.

Robert Burton on the thrill of victory and the agony of defeat.More