Call me Ishmael. Some years ago—never mind how long precisely—having little or no money in my purse, and nothing particular to interest me on shore, I thought I would sail about a little and see the watery part of the world. It is a way I have of driving off the spleen, and regulating the circulation. Whenever I find myself growing grim about the mouth; whenever it is a damp, drizzly November in my soul; whenever I find myself involuntarily pausing before coffin warehouses, and bringing up the rear of every funeral I meet; and especially whenever my hypos get such an upper hand of me, that it requires a strong moral principle to prevent me from deliberately stepping into the street and methodically knocking people’s hats off—then, I account it high time to get to sea as soon as I can. This is my substitute for pistol and ball. With a philosophical flourish, Cato throws himself upon his sword; I quietly take to the ship. There is nothing surprising in this. If they but knew it, almost all men in their degree, some time or other, cherish very nearly the same feelings toward the ocean with me.

There now is your insular city of the Manhattoes, belted round by wharves as Indian isles by coral reefs—commerce surrounds it with her surf. Right and left, the streets take you waterward. Its extreme downtown is the Battery, where that noble mole is washed by waves and cooled by breezes, which a few hours previous were out of sight of land. Look at the crowds of water gazers there.

Circumambulate the city of a dreamy Sabbath afternoon. Go from Corlears Hook to Coenties Slip, and from thence, by Whitehall, northward. What do you see? Posted like silent sentinels all around the town, stand thousands upon thousands of mortal men fixed in ocean reveries. Some leaning against the spiles; some seated upon the pier heads; some looking over the bulwarks of ships from China; some high aloft in the rigging, as if striving to get a still better seaward peep. But these are all landsmen; of weekdays pent up in lath and plaster—tied to counters, nailed to benches, clinched to desks. How then is this? Are the green fields gone? What do they here?

But look! Here come more crowds, pacing straight for the water and seemingly bound for a dive. Strange! Nothing will content them but the extremest limit of the land; loitering under the shady lee of yonder warehouses will not suffice. No. They must get just as nigh the water as they possibly can without falling in. And there they stand—miles of them—leagues. Inlanders all, they come from lanes and alleys, streets and avenues—north, east, south, and west. Yet here they all unite. Tell me, does the magnetic virtue of the needles of the compasses of all those ships attract them thither?

Now, when I say that I am in the habit of going to sea whenever I begin to grow hazy about the eyes, and begin to be over conscious of my lungs, I do not mean to have it inferred that I ever go to sea as a passenger. For to go as a passenger you must needs have a purse, and a purse is but a rag unless you have something in it. Besides, passengers get seasick—grow quarrelsome—don’t sleep of nights—do not enjoy themselves much, as a general thing—no, I never go as a passenger; nor, though I am something of a salt, do I ever go to sea as a commodore, or a captain, or a cook. I abandon the glory and distinction of such offices to those who like them. For my part, I abominate all honorable, respectable toils, trials, and tribulations of every kind whatsoever. It is quite as much as I can do to take care of myself, without taking care of ships, barques, brigs, schooners, and whatnot. And as for going as cook—though I confess there is considerable glory in that, a cook being a sort of officer on shipboard—yet, somehow, I never fancied broiling fowls, though once broiled, judiciously buttered, and judgmatically salted and peppered, there is no one who will speak more respectfully, not to say reverentially, of a broiled fowl than I will. It is out of the idolatrous dotings of the old Egyptians upon broiled ibis and roasted river horse, that you see the mummies of those creatures in their huge bakehouses, the pyramids. 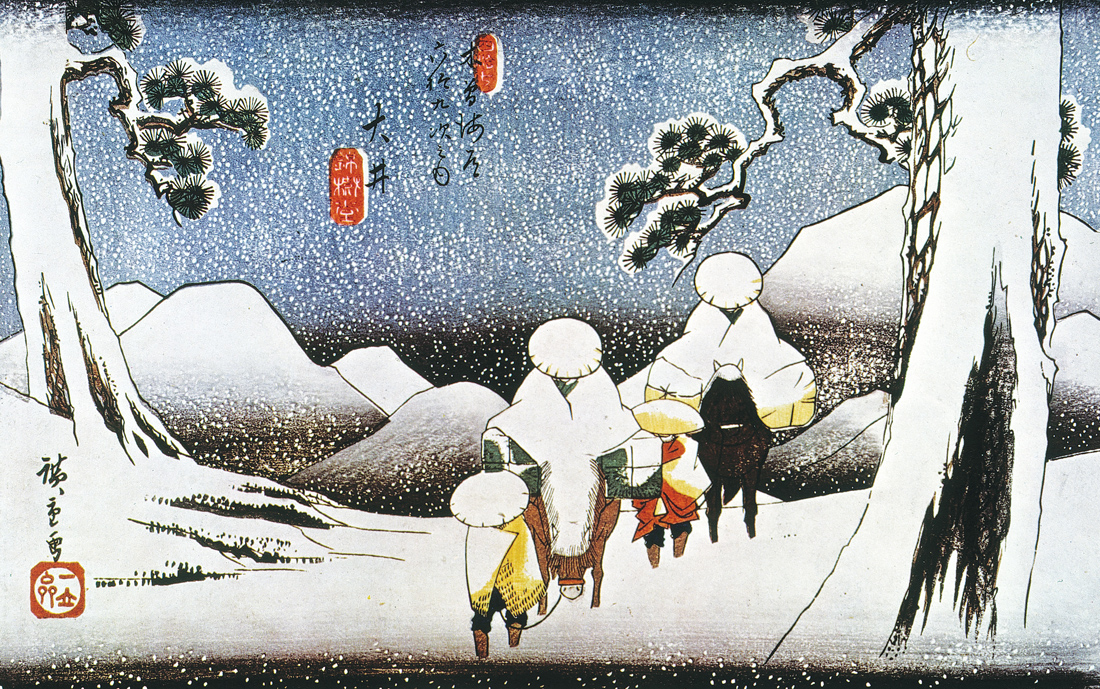 Travelers in the snow at Oi, from Sixty-nine Stations on the Kisokaidō, by Hiroshige, c. 1840.

No, when I go to sea, I go as a simple sailor, right before the mast, plumb down into the forecastle, aloft there to the royal masthead. True, they rather order me about some and make me jump from spar to spar, like a grasshopper in a May meadow. And at first, this sort of thing is unpleasant enough. It touches one’s sense of honor, particularly if you come of an old established family in the land—the Van Rensselaers, or Randolphs, or Hardicanutes. And more than all, if just previous to putting your hand into the tar pot, you have been lording it as a country schoolmaster, making the tallest boys stand in awe of you. The transition is a keen one, I assure you, from a schoolmaster to a sailor, and requires a strong decoction of Seneca and the Stoics to enable you to grin and bear it. But even this wears off in time.

Again, I always go to sea as a sailor, because they make a point of paying me for my trouble, whereas they never pay passengers a single penny that I ever heard of. On the contrary, passengers themselves must pay. And there is all the difference in the world between paying and being paid. The act of paying is perhaps the most uncomfortable infliction that the two orchard thieves entailed upon us. But being paid—what will compare with it? The urbane activity with which a man receives money is really marvelous, considering that we so earnestly believe money to be the root of all earthly ills, and that on no account can a moneyed man enter heaven. Ah! how cheerfully we consign ourselves to perdition!

Though I cannot tell why it was exactly that those stage managers, the Fates, put me down for this shabby part of a whaling voyage, when others were set down for magnificent parts in high tragedies, and short and easy parts in genteel comedies, and jolly parts in farces—though I cannot tell why this was exactly; yet, now that I recall all the circumstances, I think I can see a little into the springs and motives, which, being cunningly presented to me under various disguises, induced me to set about performing the part I did, besides cajoling me into the delusion that it was a choice resulting from my own unbiased free will and discriminating judgment.

Chief among these motives was the overwhelming idea of the great whale himself. Such a portentous and mysterious monster roused all my curiosity. Then the wild and distant seas where he rolled his island bulk, the undeliverable, nameless perils of the whale—these, with all the attending marvels of a thousand Patagonian sights and sounds, helped to sway me to my wish. With other men, perhaps, such things would not have been inducements, but as for me, I am tormented with an everlasting itch for things remote. I love to sail forbidden seas and land on barbarous coasts. But ignoring what is good, I am quick to perceive a horror, and could still be social with it—would they let me—since it is but well to be on friendly terms with all the inmates of the place one lodges in.

By reason of these things, then, the whaling voyage was welcome; the great floodgates of the wonder world swung open, and in the wild conceits that swayed me to my purpose, two and two there floated into my inmost soul, endless processions of the whale, and midmost of them all, one grand, hooded phantom, like a snow hill in the air.

From Moby Dick. Although it has subsequently been regarded as an American masterpiece, Moby Dick when it was published in 1851 was both a critical and commercial failure. Melville’s reputation as a writer, gilded in the 1840s with the success of his early South Sea novels, Typee and Omoo, was remanded to oblivion. His death on September 28, 1891 at the age of seventy-two was noted in only a few obituaries.