While I was engaged in the conquest and pacification of the natives of this province, some Indians who were natives of other provinces beyond these had told me that in their country there were much larger villages and better houses than those of the natives of this country, and that they had lords who ruled them who were served with dishes of gold and other very magnificent things; and although I did not believe it before I had set eyes on it—because it was the report of Indians and given for the most part by means of signs—yet as the report appeared to me to be very fine and that it was important it should be investigated for Your Majesty’s service, I determined to go and see it with the men I have here. I started from this province on the twenty-third of last April for the place where the Indians wanted to guide me.

After nine days’ march, I reached some plains so vast that I did not find their limit anywhere that I went, although I traveled over them for more than three hundred leagues. And after seventeen days’ march, I came to a settlement of Indians who are called Querechos, who travel around with these cows, who do not plant, and who eat the raw flesh and drink the blood of the cows they kill—and they tan the skins of the cows, with which all the people of this country dress themselves here. They could not give me any account of the country where the guides were taking me. I traveled five days more, as the guides wished to lead me, until I reached some plains—with no more landmarks than as if we had been swallowed up in the sea—where they strayed about because there was not a stone, nor a bit of rising ground, nor a tree, nor a shrub, nor anything to go by. While we were lost in these plains, some horsemen who went off to hunt cows fell in with some Indians who are called Teyas; they have their bodies and faces all painted, are a large people like the others, of a very good build. They eat the raw flesh just like the Querechos, and live and travel around with the cows in the same way. I obtained from them an account of the country where the guides were taking me, which was not like what I had been told, because they made out that the houses there were not built of stones, with stories, as my guides had described it, but of straw and skins, and a small supply of corn there. 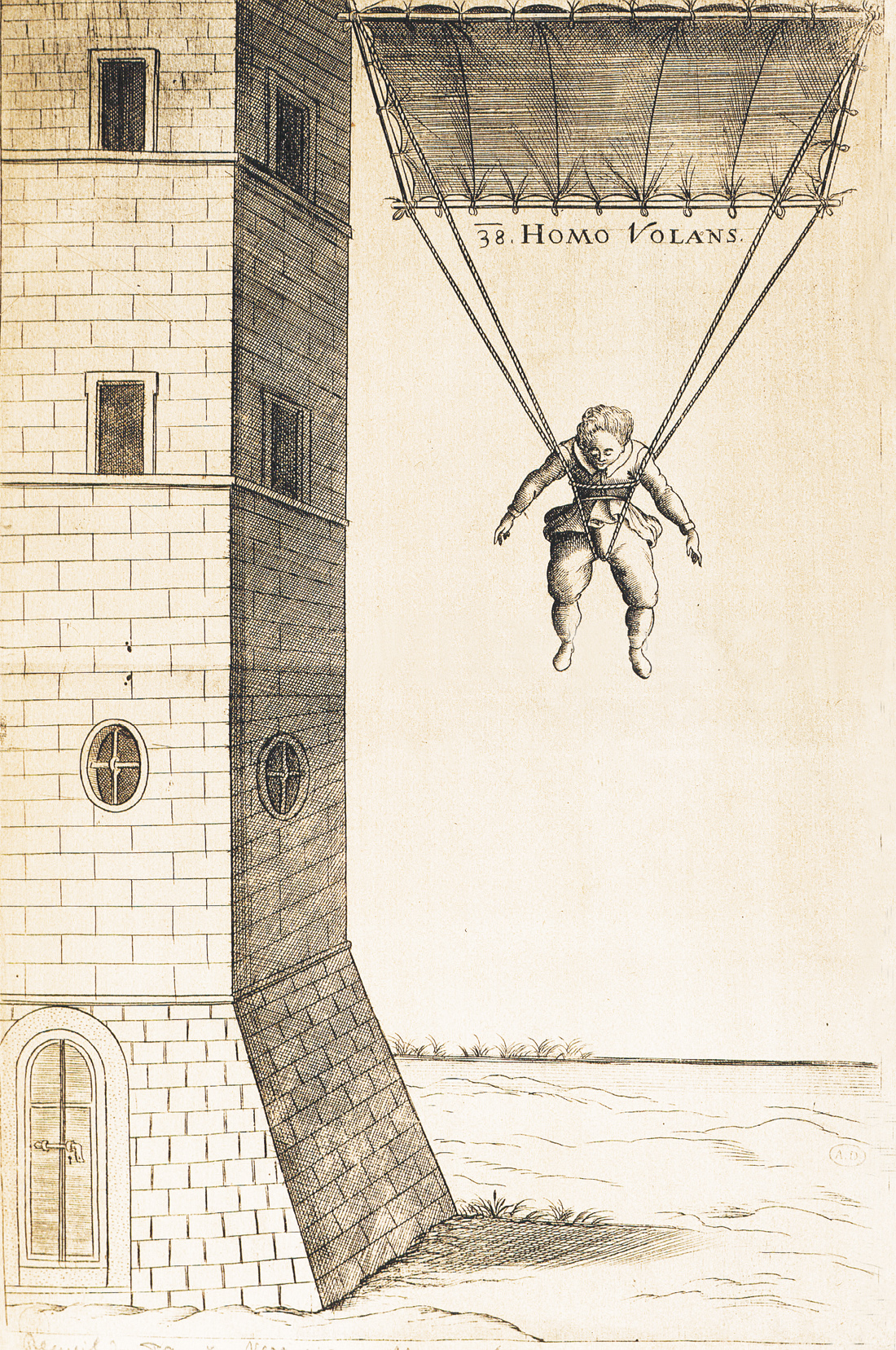 Engraving of Croatian mathematician Faust Vrančić jumping from a tower with a parachute, Italy, 1617.

This news troubled me greatly, to find myself on these limitless plains, where I was in great need of water—and often had to drink it so poor that it was more mud than water. Here the guides confessed to me that they had not told the truth in regard to the size of the houses—because these were of straw—but that they had done so regarding the large number of inhabitants and the other things about their habits. The Teyas disagreed with this. Many of the men I had with me had not eaten anything except meat for some days, and we had reached the end of the corn which we carried from this province. Because they made it out more than forty days’ journey from where I fell in with the Teyas to the country where the guides were taking me—although I appreciated the trouble and danger there would be in the journey owing to the lack of water and corn—it seemed to me best, in order to see if there was anything there of service to Your Majesty, to go forward with only thirty horsemen until I should be able to see the country, so as to give Your Majesty a true account of what was to be found in it. With only the thirty horsemen whom I took for my escort, I traveled forty-two days after I left the force, living all the while solely on the flesh of the bulls and cows which we killed, and going many days without water—and cooking the food with cow dung because there is not any kind of wood in all these plains, apart from the gullies and rivers, which are very few.

It was the Lord’s pleasure that, after having journeyed across these deserts seventy-seven days, I arrived at the province they call Quivira, to which the guides were conducting me and where they had described to me houses of stone with many stories—and not only are they not of stone, but of straw, but the people in them are as barbarous as all those whom I have seen and passed before this. In this province of which the guides who brought me are natives, they received me peaceably; and although they told me when I set out for it that I could not succeed in seeing it all in two months, there are not more than twenty-five villages of straw houses there and in all the rest of the country that I saw and learned about, which gave their obedience to Your Majesty and placed themselves under your royal overlordship.

I remained twenty-five days in this province of Quivira, so as to see and explore the country and also to find out whether there was anything beyond which could be of service to Your Majesty, because the guides who had brought me had given me an account of other provinces beyond this. And what I am sure of is that there is not any gold nor any other metal in all that country, and the other things of which they had told me are nothing but little villages—and in these they do not plant anything and do not have any houses except of skins and sticks, and they wander around with the cows; so that the account they gave me was false, because they wanted to persuade me to go there with the whole force, believing that, as the way was through such uninhabited deserts—and from the lack of water—they would get us where we and our horses would die of hunger. And the guides confessed this and said they had done it by the advice and orders of the natives of these provinces. At this, after having heard the account of what was beyond, I returned to these provinces to give Your Majesty an account of what this country amounts to, because I wrote Your Majesty that I would do so when I went there.

I have done all that I possibly could to serve Your Majesty and to discover a country where God Our Lord might be served and the royal patrimony of Your Majesty increased, as your loyal servant and vassal, who would kiss the royal feet and hands.

From The Journey of Coronado. Having heard reports of seven golden cities located somewhere to the north, Coronado set out from Compostela in 1540 with 340 Spanish soldiers and over 1,000 Tlaxcalan Indians. He failed to find the fabulous cities, but his two-year trip furnished him with knowledge of local tribes and the landscapes of Oklahoma, New Mexico, and Kansas.

The mystical marvels of tobacco.More