Consider the herd grazing before you. These animals do not know what yesterday and today are but leap about, eat, rest, digest, and leap again; and so from morning to night and from day to day, only briefly concerned with their pleasure and displeasure, enthralled by the moment and for that reason neither melancholy nor bored.

It is hard for a man to see this, for he is proud of being human and not an animal and yet regards its happiness with envy because he wants nothing other than to live like the animal, neither bored nor in pain, yet wants it in vain because he does not want it like the animal. Man may well ask the animal, Why do you not speak to me of your happiness but only look at me? The animal does want to answer and say, Because I always immediately forget what I wanted to say—but then it already forgot this answer and remained silent: so that man could only wonder.

But he also wondered about himself, that he cannot learn to forget but always remains attached to the past; however far and fast he runs, the chain runs with him. It is astonishing: the moment, here in a wink, gone in a wink, nothing before and nothing after, returns nevertheless as a specter to disturb the calm of a later moment. Again and again a page loosens in the scroll of time, drops out, and flutters away—and suddenly flutters back again into man’s lap. Then man says, “I remember” and envies the animal which immediately forgets and sees each moment really die, sink back into deep night extinguished forever. In this way the animal lives unhistorically: for it goes into the present like a number without leaving a curious fraction; it does not know how to dissimulate, hides nothing, appears at every moment fully as what it is and so cannot but be honest. Man on the other hand resists the great and ever greater weight of the past: this oppresses him and bends him sideways, it encumbers his gait like an invisible and sinister burden which, for the sake of appearances, he may deny at times and which in intercourse with his equals he is all too pleased to deny—to excite their envy. This is why he is moved, as though he remembered a lost paradise, when he sees a grazing herd, or, in more intimate proximity, sees a child, which as yet has nothing past to deny, playing between the fences of past and future in blissful blindness. And yet the child’s play must be disturbed; only too soon will it be called out of its forgetfulness. Then it comes to understand the phrase it was, that password with which struggle, suffering, and boredom approach man to remind him what his existence basically is—a never-to-be-completed imperfect tense. And when death finally brings longed-for forgetfulness it also robs him of the present and of existence and impresses its seal on this knowledge: that existence is only an uninterrupted having-been, a thing which lives by denying itself, consuming itself, and contradicting itself.

No preacher is listened to but time, which gives us the same train and turn of thought that elder people have in vain tried to put into our heads before.

If, in any sense, it is some happiness or the pursuit of happiness which binds the living being to life and urges him to live, then perhaps no philosopher is closer to the truth than the Cynic: for the happiness of the animal, that thorough Cynic, is the living proof of the truth of Cynicism. The least happiness, if only it keeps one happy without interruption, is incomparably more than the greatest happiness which comes to one as a mere episode, as a mood, a frantic incursion into a life of utter displeasure, desire, and privation. With the smallest as with the greatest happiness, however, there is always one thing which makes it happiness: being able to forget or, to express it in a more learned fashion, the capacity to live unhistorically while it endures. Whoever cannot settle on the threshold of the moment forgetful of the whole past, whoever is incapable of standing on a point like a goddess of victory without vertigo or fear, will never know what happiness is, and worse yet, will never do anything to make others happy. Take as an extreme example a man who possesses no trace of the power to forget, who is condemned everywhere to see becoming: such a one no longer believes in his own existence, no longer believes in himself; he sees everything flow apart in mobile points and loses himself in the stream of becoming: he will, like the true pupil of Heraclitus, hardly dare in the end to lift a finger. All acting requires forgetting, as not only light but also darkness is required for life by all organisms. A man who wanted to feel everything historically would resemble someone forced to refrain from sleeping, or an animal expected to live only from ruminating and ever-repeated ruminating. So: it is possible to live with almost no memories, even to live happily as the animal shows; but without forgetting it is quite impossible to live at all. Or, to say it more simply yet: there is a degree of insomnia, of rumination, of historical sense which injures every living thing and finally destroys it, be it a man, a people, or a culture.

To determine this degree, and through it the limit beyond which the past must be forgotten if it is not to become the gravedigger of the present, one would have to know precisely how great the plastic power of a man, a people, or a culture is. I mean the power distinctively to grow out of itself, transforming and assimilating everything past and alien, to heal wounds, replace what is lost and reshape broken forms out of itself. There are men who have this power to so small a degree that they will incurably bleed to death over a single experience, a single pain, frequently over a single delicate injustice, as from quite a small bleeding laceration. On the other hand there are those who are affected so little by the wildest and most gruesome calamities of life and even by their own malicious acts, that in the midst of them or shortly thereafter they achieve a tolerable degree of well-being and a kind of clear conscience. The stronger the roots of the inmost nature of a man are, the more of the past will he appropriate or master; and were one to conceive the most powerful and colossal nature, it would be known by this, that for it there would be no limit at which the historical sense could overgrow and harm it; such a nature would draw its own as well as every alien past wholly into itself and transform it into blood, as it were. What such a nature cannot master it knows how to forget; it no longer exists, the horizon is closed and whole, and nothing can serve as a reminder that beyond this horizon there remain men, passions, doctrines, and purposes. And this is a general law: every living thing can become healthy, strong, and fruitful only within a horizon; if it is incapable of drawing a horizon around itself or, on the other hand, too selfish to restrict its vision to the limits of a horizon drawn by another, it will wither away feebly or overhastily to its early demise. Cheerfulness, clear conscience, the carefree deed, faith in the future, all this depends, in the case of an individual as well as of a people, on there being a line which distinguishes what is clear and in full view from the dark and unilluminable; it depends on one’s being able to forget at the right time as well as to remember at the right time; on discerning with strong instinctual feelings when there is need to experience historically and when unhistorically. Precisely this is the proposition the reader is invited to consider: the unhistorical and the historical are equally necessary for the health of an individual, a people and a culture. 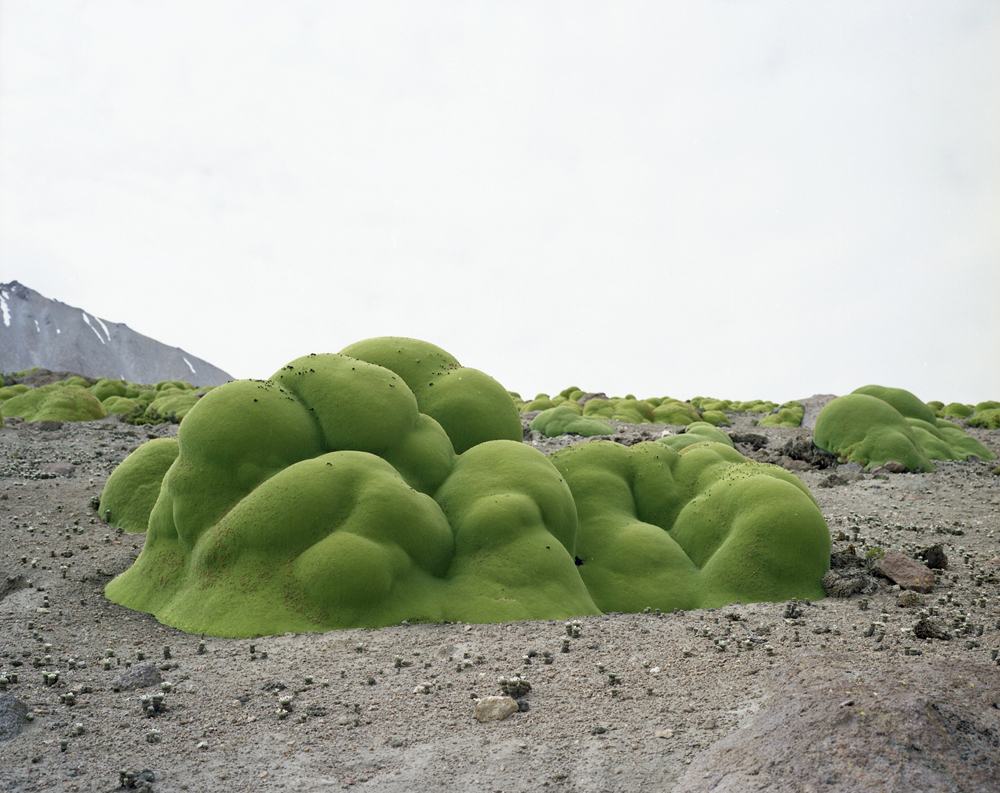 La Llareta #0308-2B31 (2,000+ years old; Atacama Desert, Chile), from the series The Oldest Living Things in the World, by Rachel Sussman, 2008. The llareta shrub grows at a rate of about one centimeter a year. © Rachel Sussman, courtesy of the artist.

Everyone will have made the following observation: a man’s historical knowledge and perception may be very limited, his horizon as restricted as that of a resident of an alpine valley, into every judgment he may introduce an injustice, into every experience the error of being the first to have that experience—and despite all injustice and all error he stands firmly in indefatigable health and vigor, a pleasure to behold; while right beside him the man of greater justice and learning deteriorates and crumbles because the lines of his horizon restlessly shift again and again, because he cannot extricate himself from the much more delicate network of his justice and truths in order to engage in rude willing and desiring. We have seen, however, that the animal, which is quite unhistorical and lives within a horizon which is almost a point, nevertheless is in a certain sense happy, or at least lives without boredom and dissimulation. We must then consider the capacity to perceive unhistorically to a certain degree as the more important and fundamental so far as it provides the foundation upon which alone something right, healthy and great, something truly human may grow. The unhistorical resembles an enveloping atmosphere in which alone life is generated only to disappear again with the destruction of this atmosphere. It is true: only so far as man, by thinking, reflecting, comparing, dividing, and joining, limits that unhistorical element; only so far as a bright lightning flash of light occurs within that encircling cloud of mist—that is, only through the power to use the past for life and to refashion what has happened into history, does man become man: but with an excess of history man ceases again, and without that cloak of the unhistorical he would never have begun and dared to begin.

From “On the Advantage and Disadvantage of History for Life.” Between 1879 and 1889 Nietzsche published almost a dozen books, among them Twilight of the Idols, The Antichrist, and Ecce Homo. The philosopher and philologist once defined his concept of “eternal recurrence” as “existence, as it is, without meaning or aim, yet recurring inevitably without any finale of nothingness.” Nietzsche called it an “European form of Buddhism” that was also indebted to Heraclitus and the Stoics. He died at the age of fifty-five in 1900.