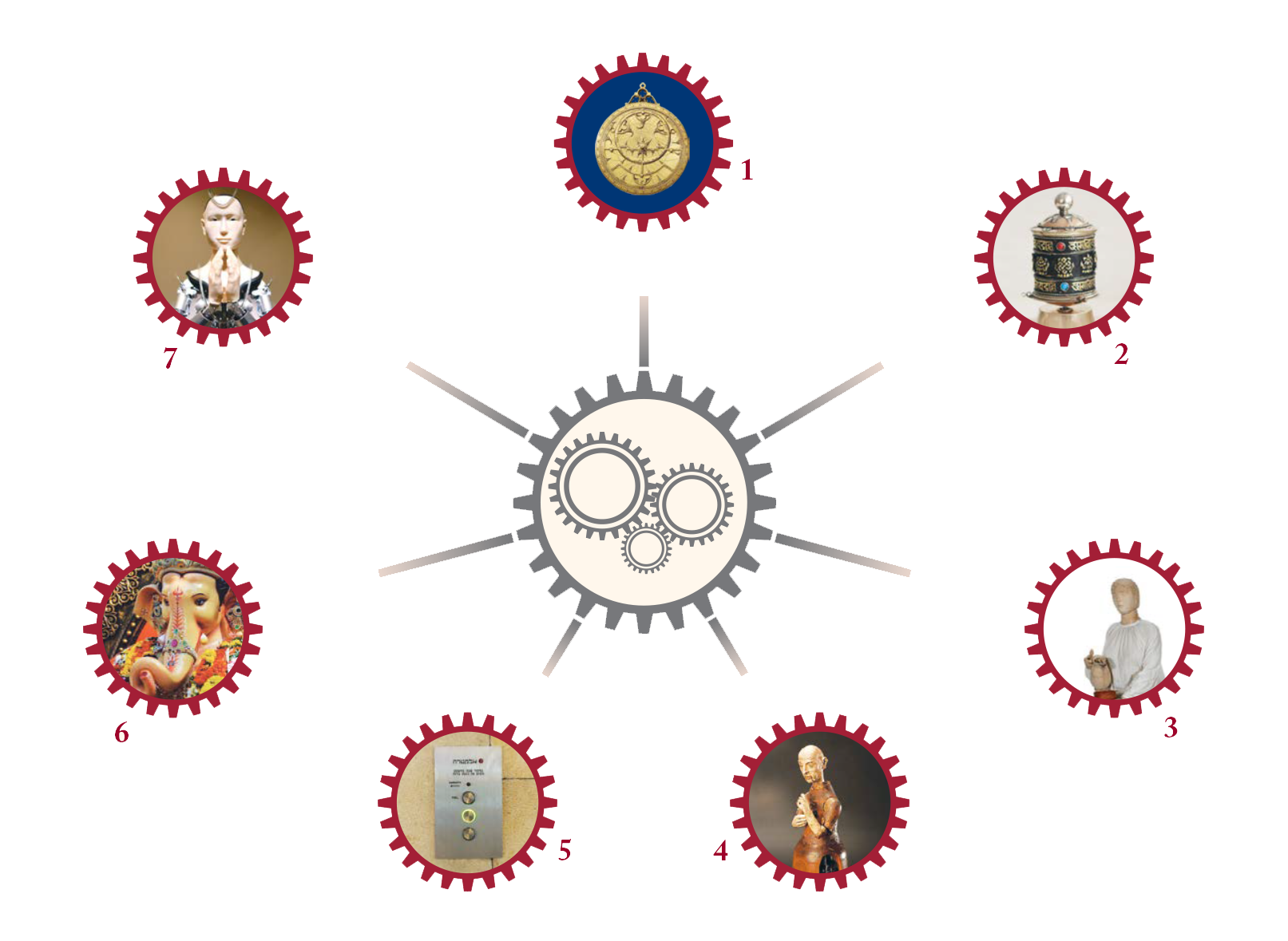 Although astrolabes were likely first invented by Roman navigators, by the eighth century the astronomical tools had become commonplace in the Muslim world, where they provided the additional function of calculating the precise times to begin salats, Islam’s five daily prayers.

Since at least the thirteenth century, Tibetan Buddhists have augmented their practice by spinning metal cylinders containing mantra-bearing scrolls. Each rotation is believed to have the same spiritual effect as orally reciting the mantra. “Just being struck by a wind which has touched such a prayer wheel,” wrote one monk in the early nineteenth century,“cleanses a great number of sins and obstacles to enlightenment and is said to implant the seed of liberation.”

Designed by the third-century engineer Philo of Byzantium, a life-size automaton in the form of a maiden used a sophisticated pneumatic system to pour libations when a cup was placed in her hand. Though she may have been designed as a dinner-party novelty, some scholars believe her drafts were offerings to the gods.

Constructed at a sixteenth-century European royal court and currently in the Smithsonian’s collections, the sixteen-inch-tall clockwork automaton in the form of a Christian monk can walk in a trapezoidal path, kiss his rosary, and beat his chest in self-flagellation. Of the many theories about the figure’s purpose, one holds that Spanish king Philip II commissioned it to thank God following his son’s miraculous recovery from an illness.

Following a mid-twentieth-century rabbinical debate over whether pressing an elevator button violates a stricture against igniting a spark on the Sabbath, some apartment buildings in cities with large Jewish populations began to program their elevators to stop on every floor during the weekly day of rest. Since 2001 all Israeli high-rise buildings with two or more elevators have been required to dedicate one to this purpose.

The annual Ganesh Chaturthi festival honoring the elephant-headed Hindu deity of new beginnings and intelligence is known for elaborate votive statues and altars constructed by artists and craftsmen. In recent years the weeklong celebration has also begun to attract the attention of engineers. In 2017 a Pune-based automation company debuted a robotic arm capable of circulating a sacred flame around a cult statue indefinitely without risk of tiring.

In 2019 the monks of the four-hundred-year-old Kodaiji temple in Kyoto unveiled a six-foot-tall robot modeled after Kannon, a central figure in Japanese Pure Land Buddhism. Designed by Osaka University roboticists, the aluminum-and-silicone robot currently recites a sermon on the Heart Sutra. Over time its creators plan to incorporate machine learning that will allow it to interact with worshippers. “This robot will never die,” remarked the temple’s chief steward. “It will just keep updating itself and evolving.”