While I was staying at the Choctaw agency in the midst of their nation, it seemed to be a sort of season of amusements, a kind of holiday, when the whole tribe almost was assembled around the establishment, and from day to day we were entertained with some games or feats that were exceedingly amusing: horse racing, dancing, wrestling, foot racing, and ball playing were among the most exciting. And of all the catalog, the most beautiful was decidedly that of ball playing. This wonderful game, which is the favorite one among all the tribes, and with these southern tribes played exactly the same, can never be appreciated by those who are not happy enough to see it.

It is no uncommon occurrence for six or eight hundred or a thousand of these young men to engage in a game of ball, with five or six times that number of spectators, of men, women, and children surrounding the ground and looking on. And I pronounce such a scene, with its hundreds of nature’s most beautiful models, denuded, and painted of various colors, running and leaping into the air, in all the most extravagant and varied forms, in the desperate struggles for the ball, a school for the painter or sculptor equal to any of those which ever inspired the hand of the artist in the Olympian games or the Roman forum.

I have made it a uniform rule while in the Indian country to attend every ball play I could hear of—if I could do it by riding a distance of twenty or thirty miles—and my usual custom has been on such occasions to straddle the back of my horse and look on to the best advantage. In this way I have sat, and oftentimes reclined, and almost dropped from my horse’s back, with irresistible laughter at the succession of droll tricks, kicks, and scuffles which ensue, in the almost superhuman struggles for the ball. These plays generally commence at nine o’clock—or near it—in the morning, and I have more than once balanced myself on my pony, from that time till near sundown, without more than one minute of intermission at a time, before the game has been decided.

It is impossible for pen and ink alone, or brushes, or even with their combined efforts to give more than a caricature of such a scene—but such as I have been able to do, I have put upon the canvas.

While at the Choctaw agency, it was announced that there was to be a great play on a certain day within a few miles, on which occasion I attended and made three sketches and also the following entry in my notebook, which I literally copy out:

Play, wherein persons of condition, especially ladies, waste so much of their time, is a plain instance to me that men cannot be perfectly idle; they must be doing something, for how else could they sit so many hours toiling at that which generally gives more vexation than delight to people whilst they are actually engaged in it?

Monday afternoon at three o’clock, I rode out with Lieutenants S and M, to a very pretty prairie, about six miles distant, to the ball playground of the Choctaws, where we found several thousand Indians encamped. There were two points of timber about half a mile apart, in which the two parties for the play, with their respective families and friends, were encamped, and lying between them, the prairie on which the game was to be played. My companions and myself, although we had been apprised that to see the whole of a ball play we must remain on the ground all the night previous, had brought nothing to sleep upon, resolving to keep our eyes open and see what transpired through the night. During the afternoon, we loitered about among the different tents and shanties of the two encampments, and afterward, at sundown, witnessed the ceremony of measuring out the ground and erecting the “byes,” or goals, which were to guide the play. Each party had their goal made with two upright posts, about twenty-five feet high and six feet apart, set firm in the ground with a pole across at the top. These goals were about forty or fifty rods apart, and at a point just halfway between was another small stake, driven down where the ball was to be thrown up at the firing of a gun, to be struggled for by the players. All this preparation was made by some old men, who were, it seems, selected to be the judges of the play, who drew a line from one bye to the other, to which directly came from the woods on both sides a great concourse of women and old men, boys and girls, and dogs and horses, where bets were to be made on the play. The betting was all done across this line and seemed to be chiefly left to the women, who seemed to have marshaled out a little of everything that their houses and their fields possessed. Goods and chattels, knives, dresses, blankets, pots and kettles, dogs and horses, and guns—and all were placed in the possession of stakeholders, who sat by them and watched them on the ground all night, preparatory for the play.

The sticks with which this tribe play are bent into an oblong hoop at the end, with a sort of slight web of small thongs tied across to prevent the ball from passing through. The players hold one of these in each hand, and by leaping into the air, they catch the ball between the two nettings and throw it without being allowed to strike it or catch it in their hands.

Soon after dark, a procession of lighted flambeaux was seen coming from each encampment to the ground where the players assembled around their respective byes, and at the beat of the drums and chants of the women, each party of players commenced the “ball-play dance.” Each party danced for a quarter of an hour around their respective byes in their ball-play dress, rattling their ball sticks together in the most violent manner, and all singing as loud as they could raise their voices, while the women of each party, who had their goods at stake, formed into two rows on the line between the two parties of players and danced also, in a uniform step—and all their voices joined in chants to the Great Spirit, in which they were soliciting his favor in deciding the game to their advantage and also encouraging the players to exert every power they possessed in the struggle that was to ensue. In the meantime, four old medicine men, who were to have the starting of the ball and who were to be judges of the play, were seated at the point where the ball was to be started and were busily smoking to the Great Spirit for their success in judging rightly and impartially between the parties in so important an affair.

In the morning, at the hour, the two parties and all their friends were drawn out and over the ground. When at length the game commenced—by the judges throwing up the ball at the firing of a gun—an instant struggle ensued between the players, who were some six or seven hundred in numbers and were mutually endeavouring to catch the ball in their sticks and throw it home and between their respective stakes, which, whenever successfully done, counts one for game. In this game every player was dressed alike, that is, divested of all dress, except the girdle and the tail—and in these desperate struggles for the ball, when it is up, there are rapid successions of feats and of incidents that astonish and amuse far beyond the conception of anyone who has not had the singular good luck to witness them. In these struggles every mode is used that can be devised to oppose the progress of the foremost, who is likely to get the ball, and these obstructions often meet desperate individual resistance, which terminates in a violent scuffle and sometimes in fisticuffs; their sticks are dropped and the parties are unmolested while they are settling it between themselves—unless it be by a general stampedo, to which they are subject who are down, if the ball happens to pass in their direction. Every weapon, by a rule of all ball plays, is laid by in their respective encampments—and no man allowed to go for one—so that the sudden broils that take place on the ground are presumed to be as suddenly settled without any probability of much personal injury, and no one is allowed to interfere in any way with the contentious individuals. 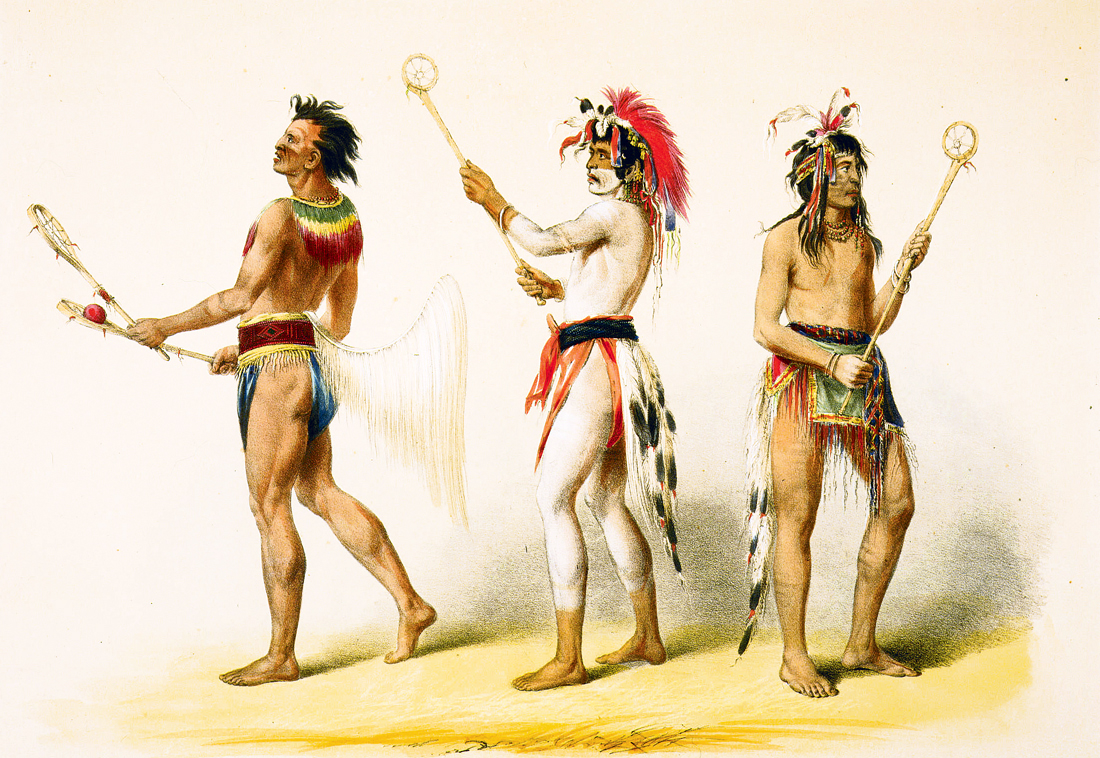 There are times when the ball gets to the ground and such a confused mass rushing together around it and knocking their sticks together without the possibility of anyone getting or seeing it, for the dust that they raise, that the spectator loses his strength and everything else but his senses. The condensed mass of ball sticks and shins and bloody noses is carried around the different parts of the ground for a quarter of an hour at a time without anyone of the mass being able to see the ball, and which they are often thus scuffling for several minutes after it has been thrown off and played over another part of the ground.

For each time that the ball was passed between the stakes of either party, one was counted for their game, followed by a halt of about one minute. When it was again started by the judges of the play, a similar struggle ensued, and so on until the successful party arrived to one hundred, which was the limit of the game—and accomplished at an hour’s sun, when they took the stakes and then, by a previous agreement, produced a number of jugs of whiskey, which gave all a wholesome drink and sent them all off merry and in good humor, but not drunk.

From Letters and Notes on the North American Indians. Catlin’s account of what came to be known as lacrosse is among the earliest descriptions of the game in English. Born in Wilkes-Barre, Pennsylvania in 1796, Catlin practiced law before turning to portrait painting in 1823. In 1830 he traveled to St. Louis with the intent of documenting the customs of the American Indians. 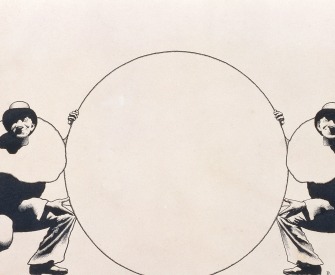 Oil in the Can

A history of handicapping. More