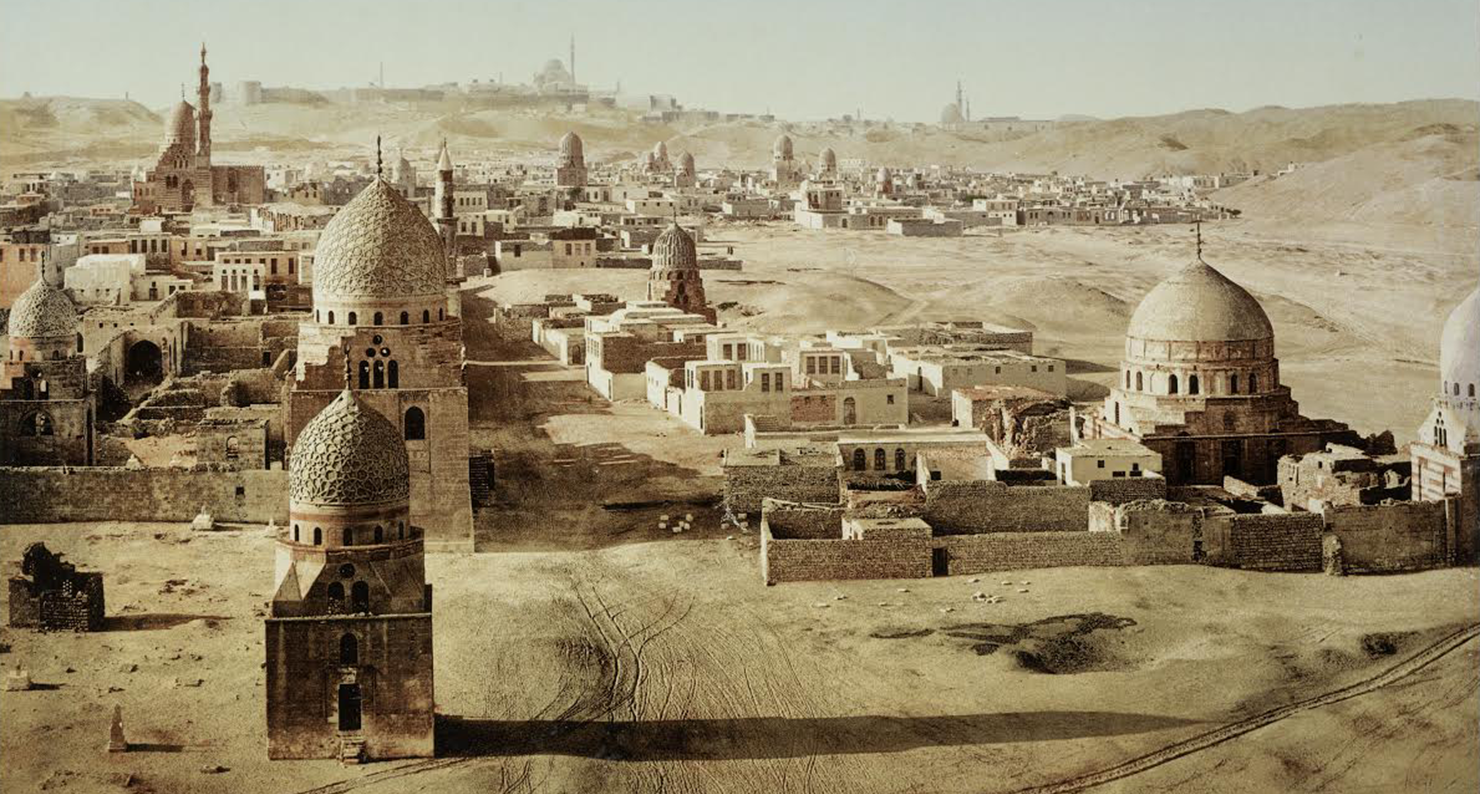 View of the Tombs of the Caliphs, Cairo, 1906. Digital image courtesy of the Getty’s Open Content Program.

In 632 the Prophet Muhammad died in his adopted hometown of Medina, causing a crisis in the new Muslim community he had brought into being. His leadership was unique in that it crossed religious, political, and military spheres—he seemed irreplaceable. It was in response to this crisis that the idea of a caliph as a ruler and a caliphate as an idea of sovereignty, concepts unique to Islam, emerged, born from the events that surrounded the birth of the new movement in the seventh century. The Prophet Muhammad always seems to have accepted his mortality—there was no idea that he might rise from the dead or continue to lead the community after he passed away. He also made it clear that he was the last of the Prophets, that great chain of the 124,000 God-inspired preachers beginning with Adam and ending with himself.

Although the Prophet accepted his mortality, he did not, according to most Muslims, appoint a successor. In early accounts, the Muslims, upon their leader’s death in 632, made hasty arrangements to choose one of the closest companions of Muhammad, the aged and respected Abu Bakr, to lead the new community. After his death, just two years later, he was succeeded by Umar, second only to Muhammad as guide and exemplar for most Sunni Muslims, who ruled until his death in 644.

But these ad hoc arrangements left a lot of questions unanswered. Did the community need a leader at all? There were many, especially from the more remote Arabian tribes, who had pledged loyalty to Muhammad but felt that with his death the bonds were dissolved and they could go their own ways. This question was settled, essentially, by force. Abu Bakr, Umar, and the elite of the Prophet’s tribe Quraysh who supported them sent out armies to force the recalcitrant tribes into line. These tribes became the rank and file of the Muslim armies that conquered the Middle East in the following decades.

And so it was established that, yes, the Muslim community, the umma, did need strong and effective leadership, but that in turn immediately led to another series of questions. The most obvious was what title the leader should have. Clearly he could not be a Prophet, for Muhammad was the last of those. Titles borne by the Byzantine emperor or the Persian King of Kings were also out of the question; they belonged to that old, corrupt, hierarchical order the armies of Islam had so triumphantly overthrown. In the years that followed, two titles were used. One was Amir al-Mu’minin (Commander of the Faithful), which made the duties of the position fairly clear: the amir was to be the military leader of the Muslims, the commander in chief, but he would provide no spiritual or legal leadership. The role would not require him to suggest answers to the many questions about religion and morals to which the Qur’an and the Prophet’s own utterances gave no clear guidance.

The office of caliph, the second title, emerged to fill that absence. The concept was successful because it was flexible to the point of ambiguity. The English word is derived from the Arabic khalifa, which can mean either successor or deputy—the distinction between the two is crucial for understanding what people wanted from the office. If it meant successor, then the caliph was clearly the successor of Muhammad (for God, being eternal, can have no successor). But at the same time he was not a prophet, so he could inherit only the more practical aspects of the Prophet’s role, the day-to-day administration but, crucially, not his duties as mediator of divine wisdom to mankind. If he were deputy, however, then he was God’s deputy on earth, a man who could interpret and explain God’s will to humanity.

Another fundamental difference of opinion emerged over the choice of caliph. Pretty much everyone believed it should be a man, and most people agreed that he should be chosen from the early Muslim elite, the Quraysh. But who among them should be chosen and how? Two bodies of thought emerged. The first was that the caliph should be chosen by the leading Muslims from the most able and the most pious. That meant the caliph would be appointed by men as the successor of the Prophet, the chief executive of the umma. Being appointed by men—who, after all, can make mistakes—rather than chosen by God, meant that the caliph’s spiritual role, his direct contact with the divine, would be limited. Over the next four centuries, these opinions were to coalesce into the Sunni theory of the caliphate.

This consensus was challenged by another, possibly more radical view of what the caliphate should mean. Some held that the right to lead the community belonged to the family of the Prophet, meaning Muhammad’s direct blood descendants through his daughter Fatima (his only surviving child) and her husband, the Prophet’s cousin Ali. They argued that this was God’s decision and that He, rather than fallible men, had chosen this family to lead the Muslims. It then became easy to argue that this God-chosen ruler would have an understanding of the divine will denied to ordinary mortals. This was, in time, to become the Shi’i view of caliphate. 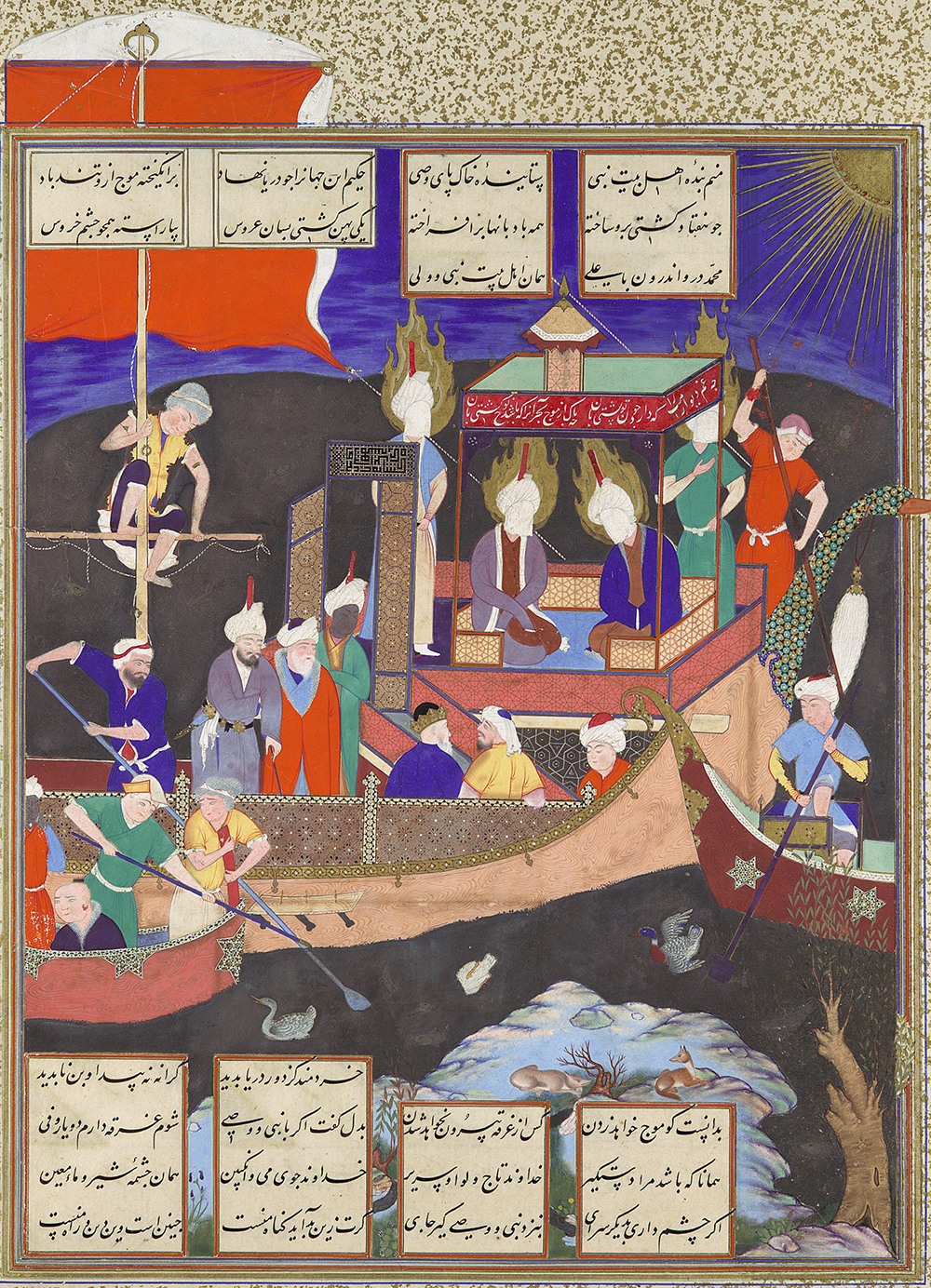 This division tended to harden along social lines. Members of the civil and military elites often supported the Sunni view of a caliph whose essential role was to manage the status quo. Those who wanted a radical change that would lead to a new and more truly Muslim society gravitated toward the Shi’a, who seemed to be the champion of the oppressed and the have-nots. This opposition was conspicuous in the propaganda leading up to the Iranian revolution of 1979 in which the family of the Prophet and their representatives among the clergy proclaimed their role as supporters of the downtrodden, enabling the popular support needed to overthrow a privilege elite represented by the shah and his courtiers.

In the centuries after the death of Muhammad, the clarity of these two differing points of view and the very viability of the office of the caliph was repeatedly challenged. When the first caliph, Abu Bakr (ruling from 632 until his death in 634), was chosen by the leading Muslims, excluding Ali, it set a pattern that would be be repeated in the selection of the caliphs who followed. In the first three centuries of Islam, the Umayyad caliphs of Damascus (661–750) and the Abbasid caliphs of Baghdad (750–945) exercised sole political control over much of the Muslim world. After the mid-tenth century, however, their political influence contracted dramatically until they ruled only a small state in central Iraq. At the same time, they never developed a role as spiritual leaders. The caliphs, unlike medieval popes, were not effective heads of the Sunni community, and the power to decide matters of doctrine, belief, and right behavior had long since passed to religious scholars. Many thinkers questioned the usefulness of the caliph. During the Crusades of the twelfth and thirteenth centuries, when the Muslims of the Middle East were faced with a major existential challenge, none of the caliphs provided effective leadership at either a military or political level. It was left to the Kurdish adventurer Saladin to lead the Muslim reconquest of Jerusalem in 1187. When in 1258 the Mongols sacked Baghdad, rolling the last Abbasid caliph in a carpet and trampling him under the hooves of their horses, many pious Muslims mourned, but his death sparked no widespread clamor for an immediate replacement, and the caliphate became obsolete, remembered but firmly consigned to the past.

For some Shi’is the idea of the caliph as a divinely inspired ruler lingered. Yet most had decided that the last of the direct descendants of Ali and Fatima had mysteriously disappeared, going into hiding in the tenth century and leaving no one any claim to rule. While the imam-caliph, his followers now claimed, lives forever and without him there can be no true Islam, no one can see him or communicate with him. It is left to the scholars, the ayatollahs, to explain what his position would be. This in turn means it is impossible for most Shi’is to accept a new human caliph: the hidden imam already fills that role.

For Sunnis, the majority community in Islam, the caliphate is an ancient and splendid but basically irrelevant idea. While the Ottoman sultans in Istanbul claimed—intermittently and somewhat halfheartedly—to be inheritors of the great office, in the early twentieth century the caliphate was about as relevant to most Muslims as the Holy Roman Empire was to their contemporaries in western Europe.

For politically active people in the Middle East, the motivating ideas were nationalism, whether Arab or Persian, and, after 1945, socialism. It was only after both these ideals had failed to bring unity and power to the Muslim people that some thinkers began to look back to what they believed to have been a pristine golden age following the death of the Prophet, when brave, honest, and incorruptible caliphs had united the Muslims and led them to victory. Surely, they argued, the way forward is to recapture that early spirit; for some, notably the radical 1970s group known as Hizb al-Tahrir and more recently the so-called Islamic State, the revival of the caliphate is central to this project of restoring the unity and power of the Muslim community. For them, the study of the early history of Islam is no antiquarian project but an essential guide to what needs to be done now. If early Muslims had subjugated unbelievers—including fellow Muslims who disagreed with them—and enslaved their women and children, then that was what these new warriors of the faith should do.

The idea of the caliphate, a system of rule combining practical political and military control with spiritual and moral leadership, is an idea that still has popular appeal, but centuries of attempts to perfect this synthesis have shown how problematic the idea of a divinely appointed ruler, a king-priest, becomes when you try to put it into practice.

Hugh Kennedy is a professor of Arabic at SOAS, University of London. He is the author of Caliphate: The History of an Idea, The Courts of the Caliphs, The Great Arab Conquests, and many other books.