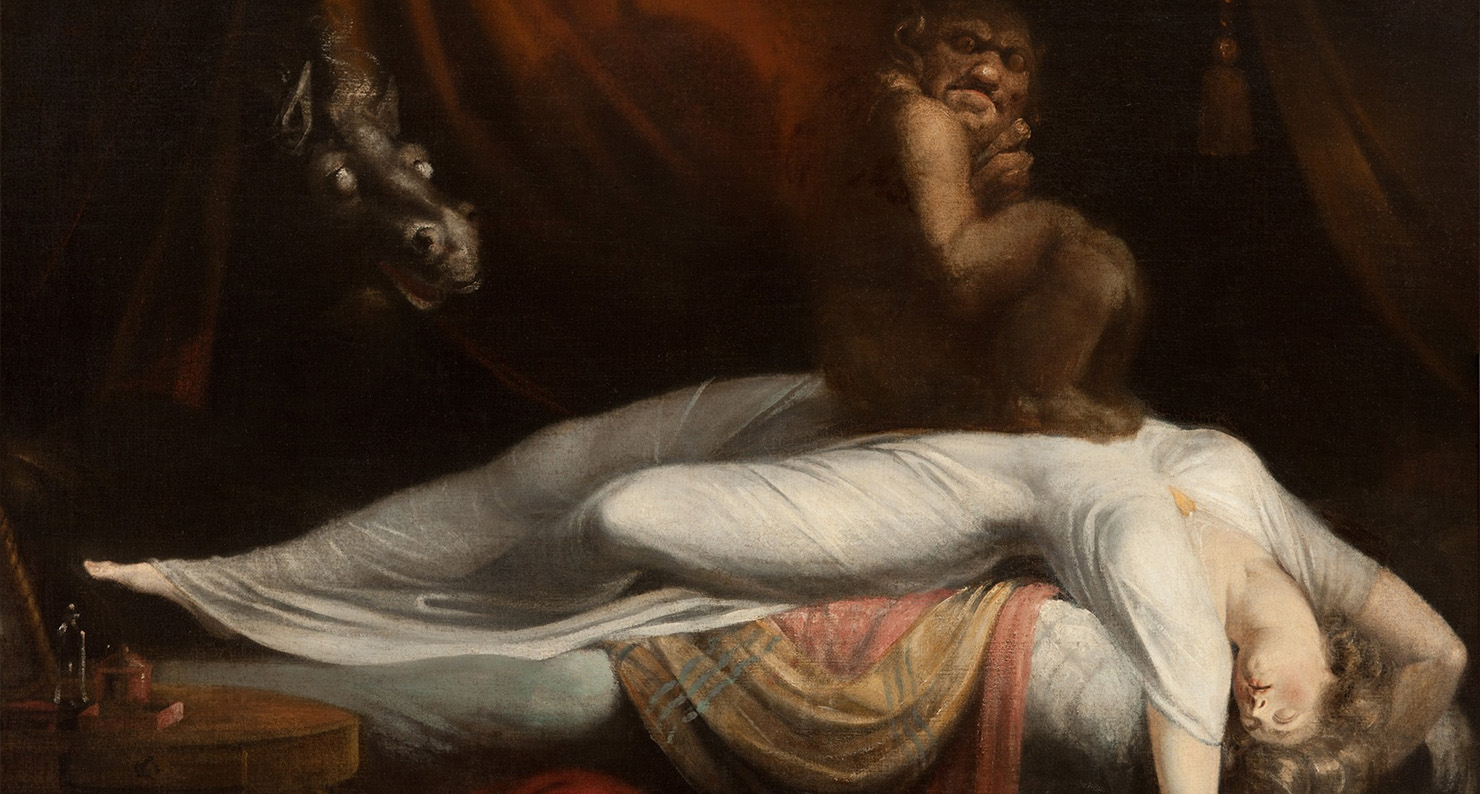 The Nightmare, by Henry Fuseli, 1781. Detriot Institute of Arts.

Published in 1835, Nathaniel Hawthorne’s short sketch “The Haunted Mind,” from Twice-Told Tales, begins by describing the period in between sleep and wakefulness as a peaceful, meditative interval.

If you could choose an hour of wakefulness out of the whole night, it would be this…You have found an intermediate space, where the business of life does not intrude; where the passing moment lingers, and becomes truly the present; a spot where Father Time, when he thinks nobody is watching him, sits down by the wayside to take breath.

But for many of us, lying awake in the middle of the night is far from pleasant. We’re all too aware of the hours left before our alarm goes off, hurtling us into the waking world of chores and responsibilities. The night can be a time of self-reflection and self-reproach, for listing all the things undone and yet to do.

However, historical evidence, borne out by scientific studies, suggests that lying awake in the middle of the night was a normal part of the way our ancestors slept—so normal, in fact, that the night was broken into two chunks, “first sleep” and “second sleep.” The two sleeping periods were interrupted by an hour or two of quiet activity, in which people prayed, discussed their dreams, chatted about the day’s events, performed household chores, smoked, or had sex. Darker activities are also said to have been common during these late hours: jealous husbands alleged that their wives used the time to fly off to the witch’s Sabbaths; petty thieves took advantage of the darkness to steal from dockyards and orchards, among other crimes.

Most of the evidence for this pattern of segmented sleep is collected in historian Roger Ekirch’s At Day’s Close: Night in Times Past. After twenty years of research, Ekirch uncovered hundreds of references to segmented sleep in diaries, legal depositions, medical books, and literature, mostly in the British Isles but also beyond. Ekirch’s evidence suggests that for centuries, perhaps millennia, people went to bed a few hours after dusk, rose sometime after midnight for an hour or two of quiet activity, then went back to bed until early morning. The two periods of sleep had their own terminology: the initial period was usually referred to as first sleep, first nap, or dead sleep, the later period as second sleep or morning sleep. (The interval in-between had no distinct name other than sometimes being called the “watch” or “watching.”)

For instance, an early English ballad, “Old Robin of Portingale,” advised that “At the wakening of your first sleepe/You shall have a hott drinke made,/And at the wakening of your next sleepe/Your sorrowes will have a slake.” In his mid-sixteenth-century Description of England, William Harrison referred to “the dull or dead of the night, which is midnight, when men be in their first or dead sleep.” Capuchin father Noel Taillepied’s 1588 Treatise of Ghosts includes a reference to “about midnight when a man wakes from his first sleep.” Some examples are ancient—Cicero, Homer, Virgil, and Pliny all refer to sleeping by intervals. And the phenomenon is by no means limited to English speakers. In French, the term for first sleep was premier sommeil; in Italian, primo sonno; in Latin, primo somno or concubia nocte. Ekirch notes that translators converting these expressions into English have often mistakenly replaced them with phrases such as beauty sleep, early slumber, or first moments of sleep.

Although this pattern of segmented sleep started to disappear in the Western world by the seventeenth century, it still persists with some traditional peoples around the globe. When anthropologist Carol M. Worthman surveyed the sleeping styles of ten non-Western traditional populations in the late 1990s, including hunter-gatherers and nomadic herders, she found that villages often slept communally, slipping in and out of slumber, so that someone was always awake and alert in case of danger. According to Ekirch, anthropologists have also found that some tribal villages in Africa are surprisingly busy in the middle of the night, and some Tiv in central Nigeria even use terms that roughly translate to first sleep and second sleep to describe their nightly routines.

Scientific research also indicates that our bodies remember this older way of sleeping. In the 1990s, Dr. Thomas A. Wehr of the National Institutes of Mental Health attempted to recreate prehistoric sleeping patterns with fifteen young men of the Washington, DC, area. Wehr asked his group of sleepers to spend fourteen hours in dark, windowless rooms each night from 6 p.m. to 8 a.m. Wehr found that the subjects slept for only an hour more than they normally would, but their sleep was divided into two periods: first they lay awake in bed for two hours, then slept for four; they woke again for two or three hours, followed by four more hours of sleep. In other words, they exhibited more or less the pattern of sleep Ekirch had uncovered. The intervening period—what English speakers once called “watching”—also had a unique endocrinological effect, with pronounced levels of prolactin compared with daytime activity. (Prolactin is a hormone best known for encouraging birds to brood peacefully upon their eggs for long periods of time, and may account for the contented feeling the sleep subjects said they experienced.)

Brainwave measurements also indicated that the in-between interval resembled a period of meditation. “This is a state not terribly familiar to modern sleepers,” Dr. Wehr told the New York Times in an interview about his research. “Perhaps what those who meditate today are seeking is a state that our ancestors would have considered their birthright, a nightly occurrence.”

By the seventeenth century, this way of sleeping started to disappear, especially among the urban elite. As historian Craig Koslofsky discusses in his book Evening’s Empire, the night went from being a time of both potential supernatural and physical terror—demons, ghosts, and criminals—to one of respectable sociability. Associations with the night may have first started to shift subtly in the wake of the Reformation and Counter-Reformation, when both Protestants and Catholics held secret meetings at night, telling and retelling stories of these nocturnal gatherings as part of their history. Enough people may have been exposed to these narratives, Koslofsky says, to lessen the general public’s associations of the night with ne’er-do-wells, drunkards, and witches. Starting in France in the 1640s, keeping later hours at balls and operas also became fashionable, a trend later helped along by the installation of the world’s first streetlights in Paris in 1667; Amsterdam followed two years later and London in 1684. By the end of the seventeenth century more than fifty of Europe’s major towns and cities were bright at night.

The Enlightenment helped dispel fears of supernatural terror with its progressive disenchantment of the world, while the rise of coffeehouses encouraged both nighttime activity and the intake of a stimulant necessary to keep it going. Eventually, gas lighting, professional police, and the Industrial Revolution encouraged a thriving nightlife on both sides of the Atlantic. Going to sleep soon after dusk suddenly seemed a waste.

By 1829, one medical journal was advising parents to force their children out of a habit of broken sleep. “If no disease or accident there intervene, they will need no further repose than that obtained in their first sleep…And then, if they turn upon their ear to take a second nap, they will be taught to look upon it as an intemperance not at all redounding to their credit.” The pattern of first sleep and second sleep persisted in rural areas into the nineteenth century, but by the 1920s both rural and city dwellers in the West had basically forgotten about it.

It’s hard not to feel elegiac for this lost time of night. In previous centuries, the interval between sleeps was one of the few times of quiet togetherness shared by family members (who often slept in the same bed). Wehr’s studies recreating prehistoric sleep patterns also found that people often woke up directly out of REM at the end of their first sleep session, leading Wehr to speculate that prehistoric peoples would have used the “watching” time to reflect on their dreams. Though we can’t know exactly how our distant ancestors treated the night, Ekirch notes that in more recent centuries such dream reflection was a common activity during this interval—an opportunity lost to modern sleepers who throw themselves directly from the covers and into the coffee.