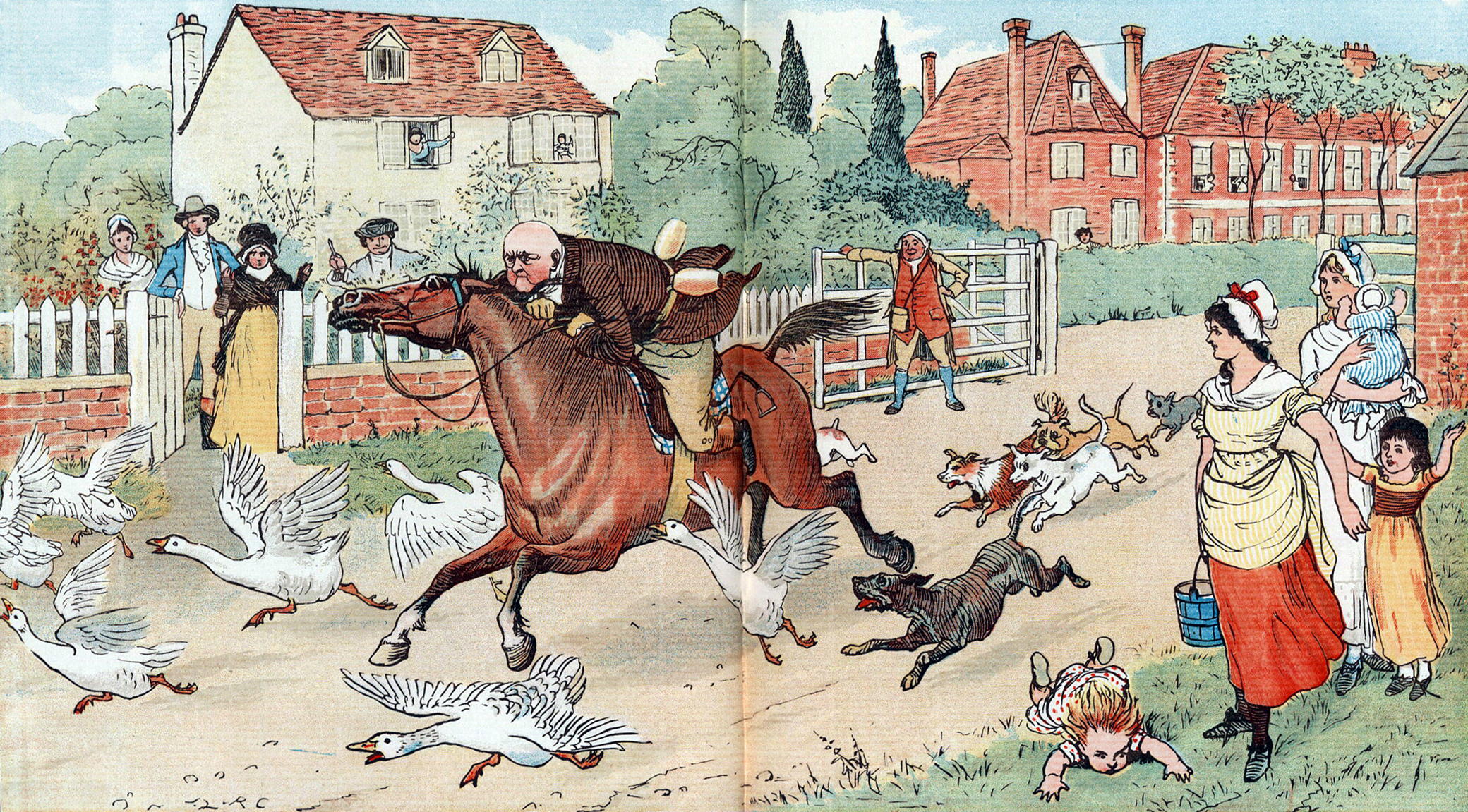 From The Complete Collection of Pictures and Songs, by Randolph Caldecott, 1887. Wikimedia Commons.

One of the earliest and strictest lessons to the children of the house being how to turn the pages of their own literary possessions lightly and deliberately, with no chance of tearing or dog’s ears.
—John Ruskin, preface to Sesame and Lilies

And my ambition now is (is it a vain one?) to be read by Children aged from Nought to Five. To be read? Nay, not so! Say rather to be thumbed, to be cooed over, to be dogs’-eared, to be rumpled, to be kissed, by the illiterate, ungrammatical, dimpled Darlings, that fill your Nursery with merry uproar, and your inmost heart of hearts with a restful gladness!
—Lewis Carroll, preface to The Nursery “Alice”

Two prefaces to Victorian texts by canonical authors, both addressed to parents, and both laying out particular visions of the young reader—but they could not be more different. For Ruskin in 1871, learning to read means learning not to dog-ear pages as part of a fastidious socialization process that involves subtle modulations of children’s behavior and movement as they come to handle books “lightly and deliberately.” By contrast, in 1890 Carroll envisages a whole host of unconventional usages—thumbing, cooing, dog-earing, rumpling, and kissing—that an audience too young to read will find for the last installment in his Alice series. Despite their varying viewpoints, though, both quotations offer moments of instruction in reading that are also instruction in not reading, if reading is conceived of as a purely mental activity: each writer imagines a child’s ideal physical, rather than intellectual, engagement with a book.

Ruskin and Carroll represent two poles in the cultural attitudes toward children as readers in the Victorian period, extremes that can be traced to the end of an earlier age. In his comprehensive history of child readers at the birth of children’s literature—between 1700 and 1840—M.O. Grenby concludes that, just as the attraction of children’s books “was frequently based less on text than physical appearance—pretty binding, miniature size, moving parts,” so “their owners often understood them as material rather than textual entities.” Material understandings of books were entrenched in young readers, and this very issue of materiality resulted in what Grenby describes as an “ongoing, attritional war” between children and the adults who governed their reading. By the Victorian period, however, the consensus around child readers had changed somewhat, as “Romantic revaluations of childhood as a phase to be cherished, rather than hastened and overcome, led at least in some quarters to a relaxation of the injunctions against children’s physical relationship with books.” (To this end, Grenby cites the rumpled and disordered books of Carroll’s preface to The Nursery “Alice”.)

Because of their linked attributes of interactivity and fragility, novelty and movable picture books hold a special place in this history of children’s reading. True movables, in particular, place specific bodily movements at the heart of the reading experience while also demanding careful handling from their child readers. 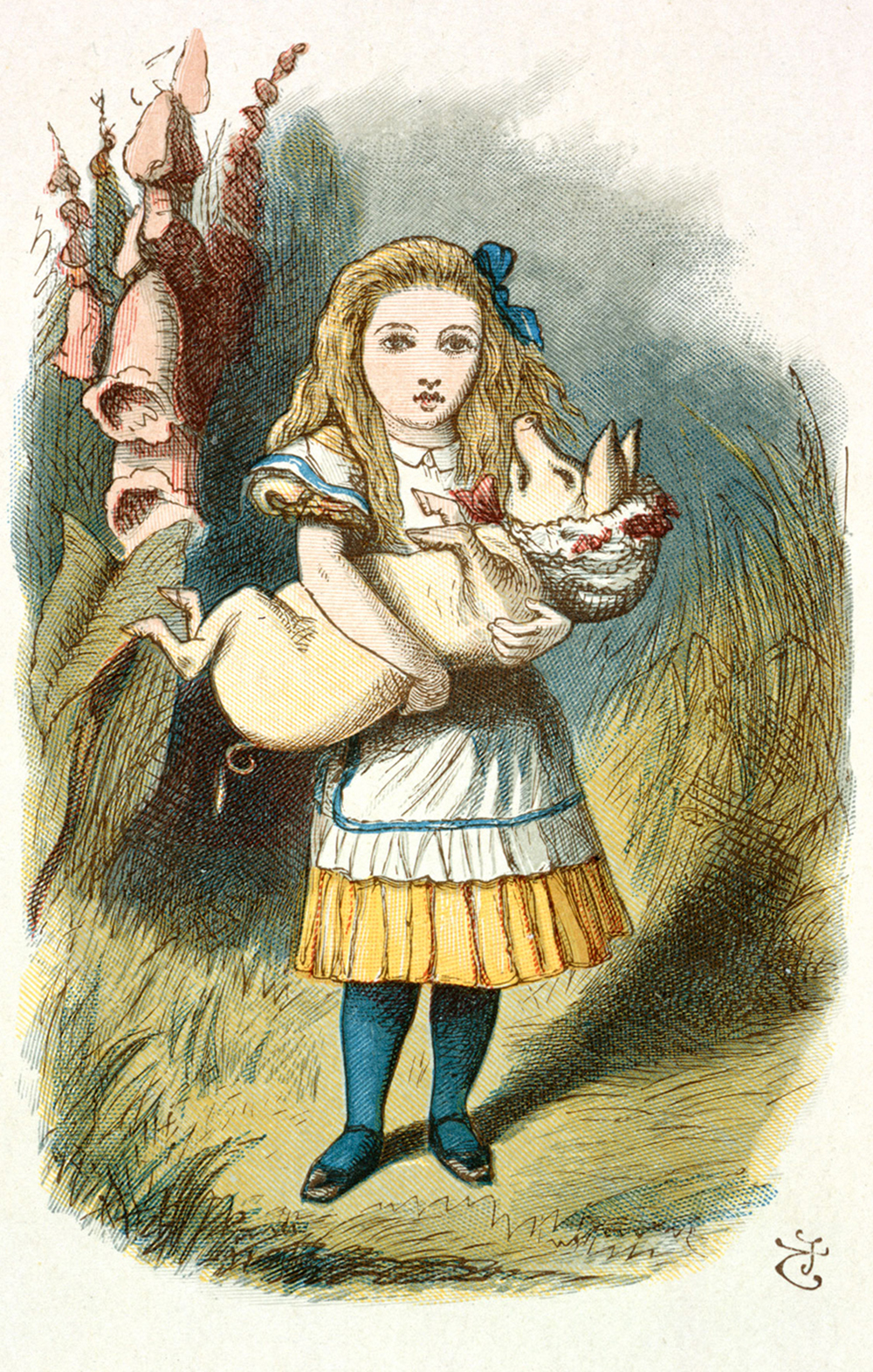 The Victorian novelty picture book diversifies the reading experience by recognizing reading as comprising physical acts as well as intellectual ones, or even refusing the opposition of the two. Take, for instance, a movable book titled The Children’s Wonderland, produced around 1900 by Ernest Nister. The volume contains multiple components: a series of short, unrelated poems composed by the prolific Nister author Helen Marion Burnside; line illustrations by Florence Hardy; and full-color dissolving-view movable pieces—segmented-disc dissolves, where the slats that interlock the two pictures form a circle or wheel. While in 1896 the word wonderland inevitably recalled the otherworld fantasy story for children, the book focuses on more naturalistic subjects, including learning to read and playing with animals, all of them mediated through the movable mechanisms. Hence, in the opening poem, it is the narrator’s “delightful task” to transport the reader into the children’s wonderland, where the dissolving-view mechanism allows one picture to change into another. The end of the poem underlines the physical procedure of moving through the book, rather than imaginative travel into the world of the story powered by the (adult) narrator of the poem: “The smallest thumb and finger here / Can always let you through!”

The philologist Armando Petrucci has posited that the characteristic ways in which children read (and do not read) demand a new iteration of what he calls the modus legendi, or reading mode. In a theoretical assessment that echoes Grenby’s carefully historicized account of children’s reading, Petrucci characterizes the practices of young readers in terms of “a physical relationship with the book that is much more intense and direct than in traditional modes of reading. The book is constantly manipulated, crumpled, bent, forced in various directions, and carried on the body.” This manipulation results in an altered subject–object relationship between book and reader: “One might say that readers make [the book] their own by an intensive, prolonged, and violent use more typical of a relationship of consumption than of reading and learning.” Petrucci’s sense that childhood book use is not best thought of in terms of learning is particularly provocative considering the fact that, as scholar Patricia Crain argues, children’s reading has been conceived of as so involved with the classroom that historians of reading have seldom considered how children read outside an educational context. 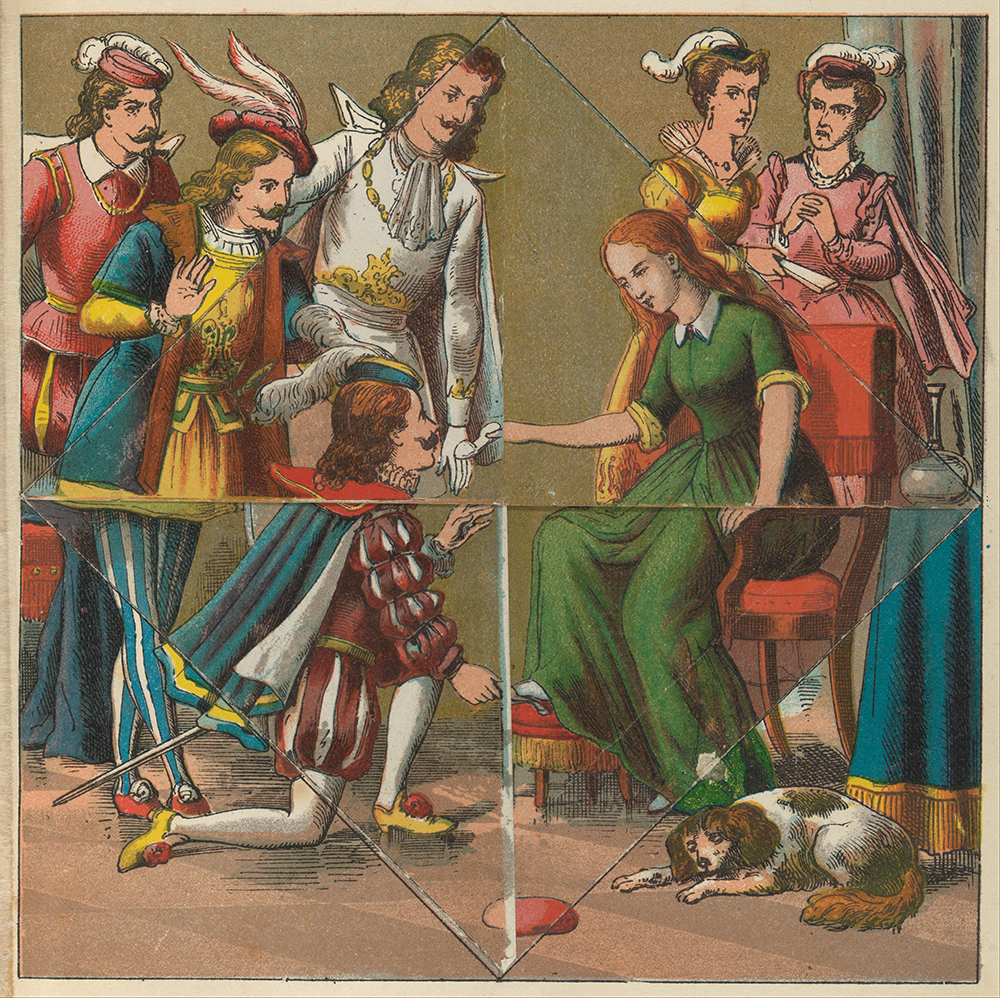 The child’s modus legendi is different once again when it comes to novelty books. In the case of conventional books, the habits Petrucci describes are outright transgressive, but the novelty book serves as a heightening apparatus for the child’s physical understanding of books and reading—it constantly engenders such behaviors. The book is manipulated, as when the reader pulls a tab to animate a page. The book is bent (and potentially crumpled and forced) when the reader folds back a flap to reveal the continuation of the story. The book may be carried on the body—it may even be designed in this way, as when Samuel and Joseph Fuller attached wrist ribbons to the protective sheaths of their paper doll books.

Victorian novelties present their unique versions of the prohibitions that typically govern children’s reading. They often give explicit instructions as to the handling of the book (gently, without tearing, and so on) rather than the lessons to be gleaned from its contents. Such injunctions, which are particularly common in the complex movables made by German illustrator Lothar Meggendorfer at the end of the century, construct the reader physically. A further central dimension to this involves a material paradox, however: no matter how careful the reader is, the movable book is always liable to be torn, ripped, or destroyed. The nineteenth-century movable book forbids its destruction while its material properties make that destruction almost inevitable.

The child’s physical interactions with the novelty book, both scripted and unscripted, are a potential site of resistance, a way of eluding or reshaping common demands on or expectations of children’s reading. In Walter Benjamin’s words, the child’s material engagement with her books makes the “true meaning” of children’s books “very different…from the tedious and absurd reasons that induced rationalist pedagogues to recommend them in the first place.” Material acts on or with the book—Benjamin discusses scribbling and coloring-in—undermine the didactic reasoning that has often underpinned children’s literature and justified support for children’s reading. They provide concrete, evocative evidence of the complicated question of agency in children’s reading; they testify to a physicalized modus legendi that is both distinctive to the novelty book and indicative of how critics might challenge canards in the larger history of children’s reading. 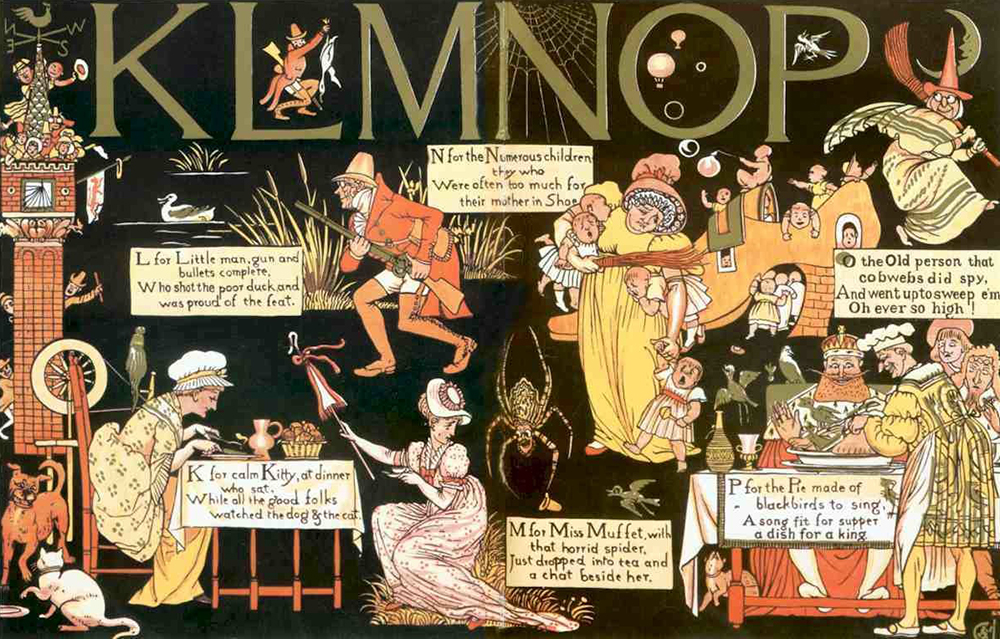 Nineteenth-century novelty picture books exercised various techniques to delineate the sort of embodied reading that was acceptable. One of these techniques—common in many branches of children’s literature—was to model reading directly, in pictures or in words. As Patricia Crain has shown in her account of visual tropes of children’s reading, including the “child-in-a-window-seat-with-books” and the “standing-book-in-hand child,” such depictions provide implicit guidance as to what, how, why, when, and where children should read. For example, to return to The Nursery “Alice”: if Carroll’s preface to mothers clearly frames the book’s entire contents, E. Gertrude Thomson’s cover illustration of Alice asleep beneath a tree does similar work. In the image, an open book, colored illustrations just visible on its pages, lies at Alice’s side. Floating on a cloud in the background are characters from the story: the Mock Turtle, the Gryphon, the pig baby, the White Rabbit, and the Dormouse. With its discarded book, Thomson’s illustration promotes a lax use of The Nursery “Alice”, perhaps echoing the play of Carroll’s “dimpled darlings” in their nursery. Thomson shows Alice accompanied by a book with pictures, invoking one of the most celebrated of the heroine’s pert opinions: “ ‘And what is the use of a book,’ thought Alice, ‘without pictures or conversation?’ ” No such statement exists, however, in The Nursery “Alice”; by 1890, illustrated books are simply the correct reading material, the default answer to the question of what a child should read. Location is important, too: Alice reads outside, like various eighteenth- and nineteenth-century child readers real and imagined. There is no adult present.

In the nineteenth century as today, children’s embodied reading summons the worry that children will rip or tear their books. This is why adult supervision governed children’s physical usage of books as well as which books children read or how they understood them, as is confirmed not just in adults’ instructions about children’s reading (Ruskin’s horror of dog-ears in Sesame and Lilies) but also in memories of what it was like to read as a Victorian child: author Mary Carbery recollects such instruction in action as “her father taught her to handle a book—how to take it down from a shelf, how to replace it without squeezing it, how to turn the pages slowly and with respect.” Despite the special physicalized reading acts demanded by the novelty picture book, parallel passages of general instructions for book handling are found there, too, as when the last verse in Comical Kittens tells its readers to “shut [the book] up carefully, and put it away, / To look at again, on the next rainy day.” 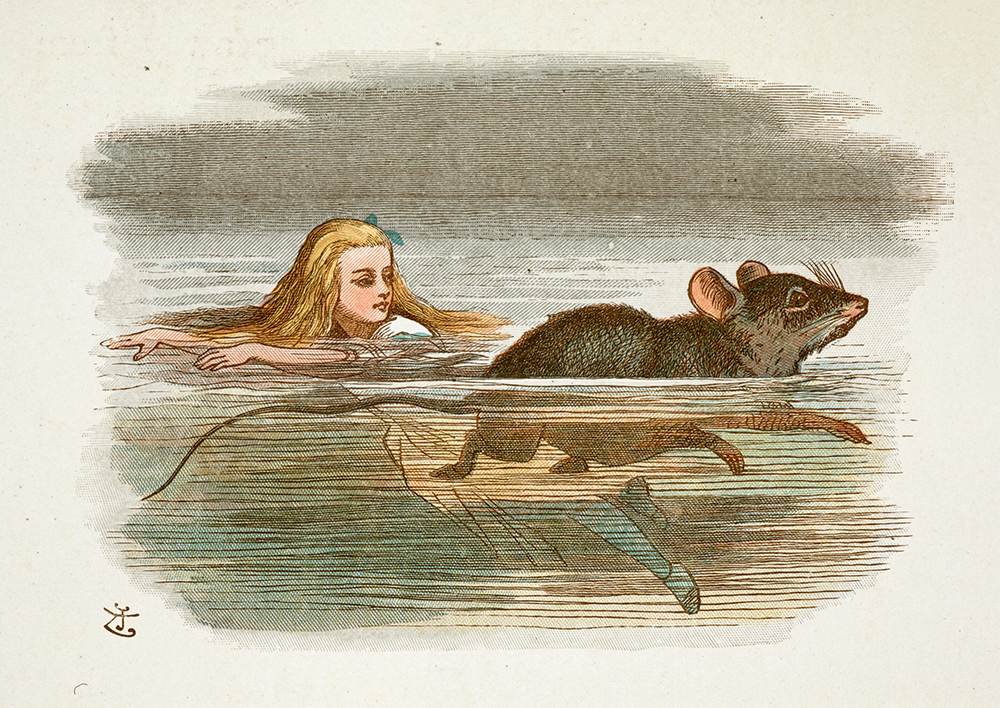 When publishers failed to make an indestructible movable book, prefatory material exhorting the child reader to cautious handling was the next line of defense. The promissory tone of the set of notes in Living Nursery Rhymes makes kind treatment of the book into an exchange: in return for her care and correct manipulation, the child is assured of the continuation of the peculiarly specific amount of delight to be derived from the book—that is, four times as much as from other children’s books. Other examples approach the same subject with more charm than wheedling. There are countless versions of such demands in Meggendorfer’s publications, chiefly because as the ingeniousness of movable books increases, so too does their fragility. Meggendorfer’s Comic Actors has a prefatory poem that anticipates movable figures so captivating that the child will cry, “ ’Tis really hard… / To think them only paper.” The figures nevertheless are paper, and paper needs certain treatment: “Your fingers must be slow and kind / And treat them well while using,” “Turn the leaves and use them well / And don’t be over zealous.” Always Jolly! is even blunter, its opening verse worth giving in full:

Within this book, my own dear child,
Are various pictures gay.
Their limbs move with gestures wild,
As with them you do play.
But still they are of paper made,
And therefore, I advise,
That care and caution should be paid,
Lest woe and grief arise;
Both you and pictures then would cry
To see what harm is done,
And sigh would follow after sigh
Because you’ve spoilt your fun.

Hannah Field is a lecturer in Victorian literature at the University of Sussex, the author of Playing with the Book: Victorian Movable Picture Books and the Child Reader, and a coeditor of Space and Place in Children’s Literature, 1749 to the Present.