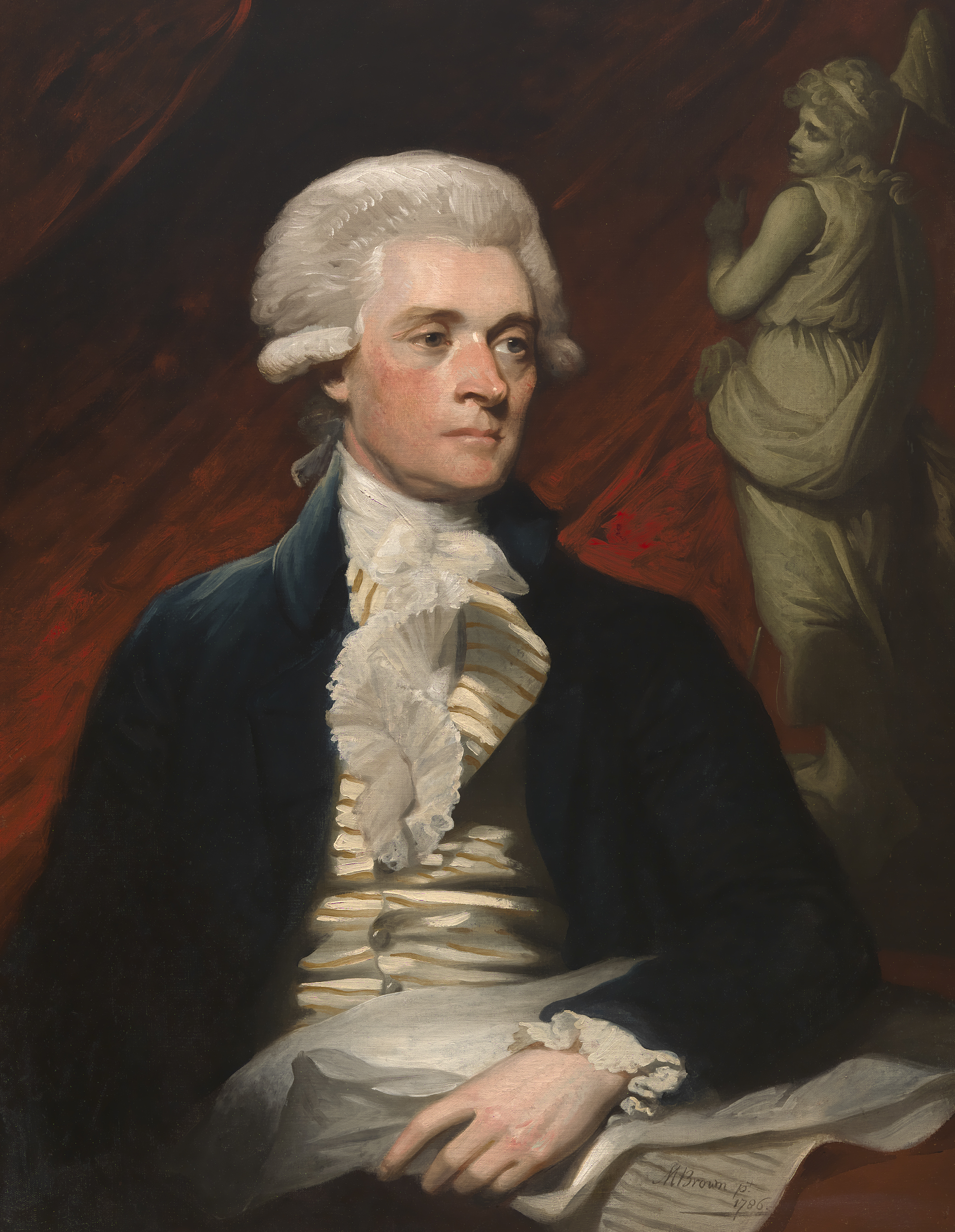 On September 24, 1785, Thomas Jefferson—living in Paris as ambassador from the world’s newest nation—received a letter, whose opening words read as follows:

We the Subjects of the United States of America Having the Misfortune of Being Captured off The Coast of Portugal the 24th and 30th of July By the Algerines, and Brought into this port Where we have Become Slaves, and Sent To the workhouses, Oure Sufferings is Beyond Oure Expressing or your Conception.

The above petition was sent from Richard O’Brien, an American prisoner in Algiers. Captain of a mercantile ship out of Philadelphia, O’Brien and his crew had been captured by Algerian pirates in the summer of 1785 and brought back to “the Barbary Coast.” Pleading for help, O’Brien wrote these initial words to Jefferson even while enduring slavery in Muslim lands, begging for emancipation from African “workhouses.”

In the autumn of 1785, Richard O’Brien was a name wholly new to Jefferson. For O’Brien, Jefferson was entirely familiar, and already long associated with capture, conflict, and escape from America’s enemies. Born in Maine into an Irish family, O’Brien would eventually adopt Philadelphia as his home—the same city where Jefferson also arrived in 1775 to attend the Second Continental Congress. The War of Independence that escalated after Jefferson’s famed Declaration in 1776 saw O’Brien enlist in the patriot cause, assigned as lieutenant to a Virginian brig, coincidentally named the Jefferson. O’Brien was on board the Jefferson in the spring of 1781 when it was “capturd & burnt” by the British, finding refuge in Richmond, arriving to the city just in time to spot the state’s governor—Thomas Jefferson himself. Forced to flee the Jefferson in flames, O’Brien had reached Richmond in the months following Jefferson’s own return, after his supposed “abandonment” of the city during a raid by Benedict Arnold in January.

Four years after fleeing the Jefferson only to glimpse another recent fugitive in Richmond, Thomas Jefferson himself, one name naturally occurred to O’Brien as he sought to escape America’s new enemy: the Barbary pirates. Jefferson was an obvious choice; and yet he was also an ironic one. As an American slave in North Africa, O’Brien decided to seek aid from an American famed for his conflicted stance toward African slavery. On this issue, Jefferson was a notorious contradiction. As early as his first published work in 1774, his Summary View of the Rights of British America, Jefferson had advocated for “the abolition of slavery”—an advocacy that he extended at the Second Continental Congress in Philadelphia in 1775. A decade later, when O’Brien’s letter reached him in Paris, Jefferson’s stance against slavery was still the same, although publicly rarely expressed. From Paris Jefferson found himself in no position to influence slavery’s future back home. Living abroad during the very years that America’s “peculiar institution” was enshrined in law, Jefferson was out of the picture even as the U.S. Constitution was framed during the latter half of the 1780s—a Constitution whose preamble would open, “We the People of the United States,” and yet also affirm African slavery as an American right.

In 1785 Jefferson still believed that American slavery should end. And yet this consistent public position only made his private inconsistencies more disquieting. For Jefferson, slavery was a legal abstraction to abhor; but it was also the institution to which he was born, and which he embraced as an adult. Beginning life at Shadwell, a plantation owned by his father, Peter Jefferson, young Thomas was surrounded by slaves during his boyhood; and, at his father’s death in 1757, Jefferson inherited not only Shadwell but “fifty-two slaves” from his father. By the time Jefferson departed for Paris, his own household at Monticello was sustained by “some two hundred slaves.” In 1784 Jefferson crossed the Atlantic “en famille,” accompanied by Martha, his elder daughter and the namesake of his deceased wife. Sailing eastward to Europe, Jefferson left behind his other daughter, Mary, but also captive men, women, and children at his Virginian home—families whose own forebears had once survived an Atlantic crossing, journeying westward to America, where their descendants would be born into bondage at Monticello.

The contradiction between Jefferson’s public rejection of African slavery and his private reliance on African slaves made the letter he opened in September 1785 seem especially relevant. “Oure Sufferings is Beyond Oure Expressing or your Conception,” O’Brien clumsily cries out. Echoing views held by Jefferson himself, emphasizing slavery’s injustice and its inexpressible pain, O’Brien’s letter likely touched rather close to home. Even as he read these words from an American slave in Muslim lands, Jefferson’s own slaves from Monticello were never far from his mind. His youngest daughter, Mary—known as Polly—would eventually join Jefferson and Martha in Paris, accompanied by a fourteen-year-old slave named Sally who is now synonymous with Jefferson, as well as with secrecies of “Conception” that evaded his own “Expressing.” Despite rumors plaguing him throughout his life and long after, Jefferson himself would always stay silent regarding the relationship begun with Sally Hemings during their time together in Paris.

I have received your letter and shall exert myself for you. Be assured of hearing from me soon: but say nothing to any body except what may be necessary to comfort your companions. I add no more, because the fate of this letter is incertain.

I am Sir Your very humble servant.

For five full days after opening O’Brien’s urgent appeal from Algiers, Jefferson made no response. After days of delay, Jefferson generated only the five lines quoted above. Dated September 29, 1785, Jefferson breaks his silence, but only to encourage O’Brien to stifle his own speech.

For O’Brien, Jefferson’s brisk letter would have offered cold “comfort.” “Be assured of hearing from me soon” was Jefferson’s single promise; and yet more than a month passed before Jefferson wrote again. In early November, Jefferson’s next letter informed O’Brien of a lone emissary— John Lamb—who was dispatched from Paris to ransom O’Brien and his crew from Algerian captivity. Even in this meager effort, however, Jefferson had “no authority.” Lamb’s unlikely mission to save the “twenty-two of our citizens in slavery,” Jefferson confessed to O’Brien, was launched “without instruction from Congress,” with no approval of funds for “redemption”; “each person” must “separately make himself answerable for his own redemption in case Congress requires it,” Jefferson added. Unsurprisingly, such tentative assistance was ineffective, and O’Brien’s slavery in North Africa would stretch on well into the next decade. Year after slow year, O’Brien suffered in Muslim “workhouses,” while witnessing many of his crewmates die in captivity.

Even if heeding Jefferson’s imperative to “say nothing to any body,” O’Brien did, however, speak secretly to himself, scribbling in a private diary as his enslavement entered a new decade. Inscribed during his African incarceration, O’Brien’s diary—now housed in Philadelphia—opens with the following first words, featured inside its front cover and autographed in his hand:

Bismillah. In the Name of the Most Merciful God

Specifying the “city” of his captivity, these first lines of O’Brien’s “Algiers” diary also emphasize his identity and ownership. Himself a slave, O’Brien yet possesses at least this single item: “his Book.” Opening with his own name, it is “the Name” of “God” that fills O’Brien’s second line, invoking the divine as “Most Merciful,” seeking heavenly compassion during earthly enslavement. Before this English phrase, however, O’Brien opens his second line with a word in a second language, naming the “merciful” Lord with a phrase he learned in cruel captivity. To begin his prayer, O’Brien inscribes “Bismillah”—a snippet of sacred Arabic that signifies “In the name of Allah.” A formula, conventional and common, this same phrase opens every single chapter of the Quran except one. Introducing his own intimate diary, O’Brien decides to use diction essential to Islam.

Faced with the failure of his fellow Americans to free him, O’Brien not only endured a decade of captivity but acclimatized to his surroundings, domesticating Islamic prayers within his own private diary. For Jefferson, the captivity of O’Brien and his crew proved personally “haunt[ing].” Although America’s “Minister Plenipotentiary,” Jefferson found himself impotent in Paris, powerless to save a fellow American in Muslim captivity. And yet O’Brien’s imprisonment would lead to outcomes not all negative for Jefferson. Many years later, when confronted by Arabic manuscripts authored by other slaves—slaves who had more authentic African roots and who also directed their prayers to Allāh—Jefferson would find himself in need of help, and one name would naturally occur to him: Richard O’Brien.

From Jefferson’s Muslim Fugitives: The Lost Story of Enslaved Africans, Their Arabic Letters, and an American President by by Jeffrey Einboden. Copyright © 2020 by Jeffrey Einboden and published by Oxford University Press. All rights reserved.

Jeffrey Einboden is a professor of English at Northern Illinois University and a 2017 fellow of the American Council of Learned Societies. His most recent books include Jefferson’s Muslim Fugitives, The Islamic Lineage of American Literary Culture, and Islam and Romanticism.