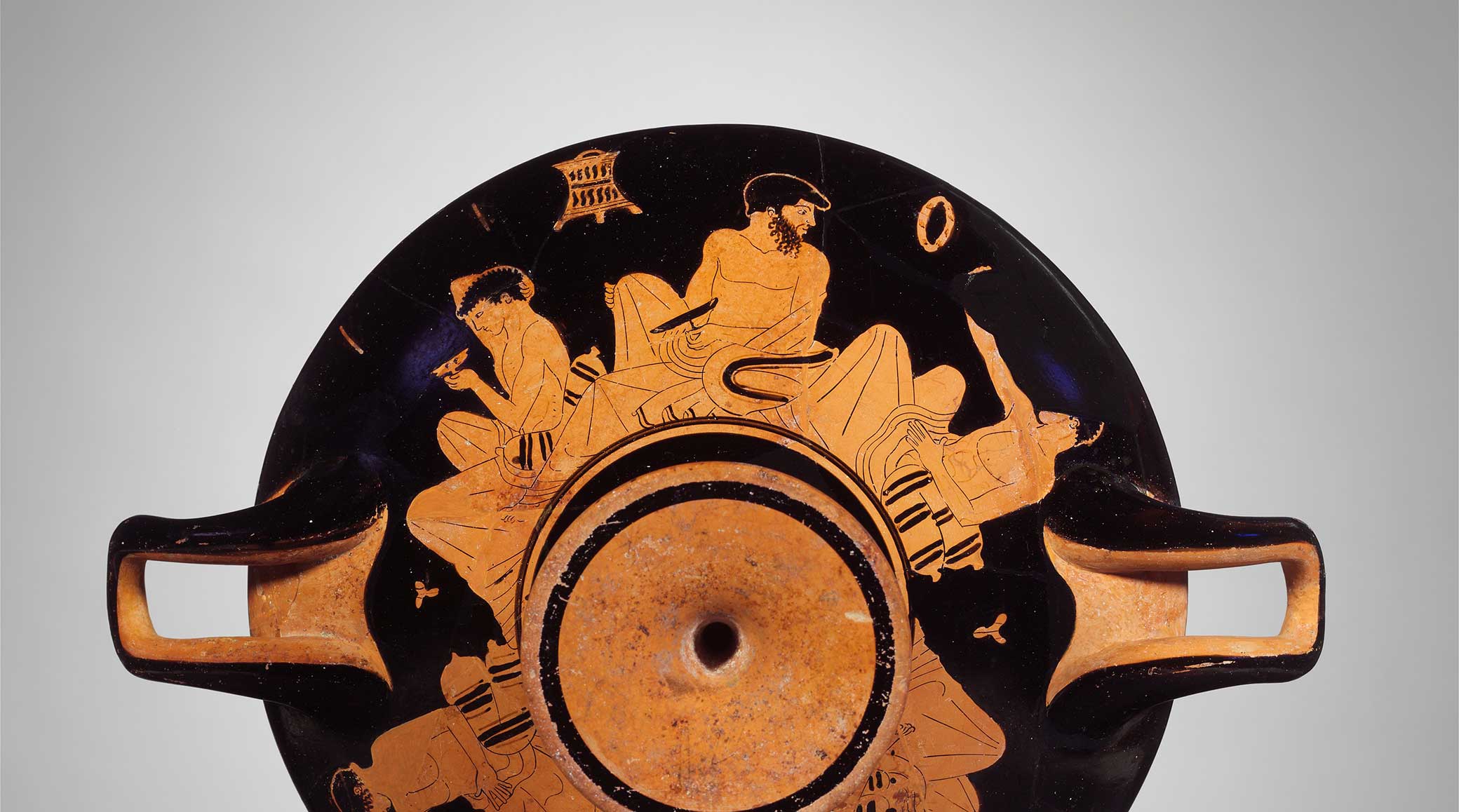 Drinking cup, attributed to the manner of the Pistoxenos Painter, c. 480 bc. The Metropolitan Museum of Art, purchase by subscription, 1896.

In the third century bc, the Roman nobility became increasingly Greek in their habits, a phenomenon known as “Hellenization,” and those with a particular taste for Greek culture were known as “philhellenic.” Under the rule of the emperor Nero, a notorious tyrant who, incidentally, was said to have twice been in a same-sex union, philhellenism became even more pronounced.

Yet there was also an ambivalence in this relationship. The Romans, after all, had conquered the Greeks, and to what extent could you truly want to replicate a loser’s culture? They filled their homes with Greek sculptures; but they were looted sculptures, their display as much a mark of subjugation as respect. When Greek-speaking Romans addressed the Senate, their words were translated into Latin, as much as a sign of inferiority as to help with comprehension. Even within the more Hellenistic aristocracy, there were significant figures who saw Greece as a moral threat, if not a military one. Cato the Elder was one such figure. Greece, Cato felt, was a degenerate and decadent culture and its adoption would bring trouble for the Romans, whom he saw as a people of noble simplicity and strength. Addressing his own child, he said, “I shall speak of those Greeks in a suitable place, son Marcus, telling what I learned at Athens, and what benefit it is to look into their books—not to master them. I shall prove them a most worthless and unteachable race. Believe that this is uttered by a prophet: whenever that folk impart its literature, it will corrupt everything.”

This Roman ambivalence, that the Greeks were both wise and decadent, worthy of study but worth being wary of, rang down through history and has had a significant impact on the history of homosexuality. As the classical literature of the Greeks and Romans was supposedly “rediscovered” by scholars in western Europe in the Renaissance, many adopted the same prejudices and intellectual arguments that were being fought almost two millennia earlier. Greek attitudes toward same-sex relationships were known about and were hard for good Christian academics to square with their otherwise fulsome admiration of the virtues of classical Greece. While most Victorian scholars were disgusted by the “unspeakable vice of the Greeks,” as the uptight Mr. Cornwallis refers to it in E.M. Forster’s Maurice, those who found their desires drifting in a similar direction found in Greek culture a heroic example that their sort had indeed always existed, and began mining Greek literature for heroes and storylines that might serve as a defense of the unspeakable vice. The works of Greeks like Plutarch and Plato were used to help imagine a positive model for male and female same-sex relationships, although neither the Greeks nor the Victorians had quite the same concept of the “homosexual” that we have today.

For the Greeks, the concept did not meaningfully exist at all; the social identities we today understand in the West as a gay man or a bisexual woman, for example, simply weren’t something that people recognized. Greece was not a single political entity with a set of laws and customs that everybody followed; different city-states developed different sexual cultures. Across Greece, sexual activity between men was common; the important prohibitions were focused not on gender but status (and hence age).

In Plato’s Symposium, Aristophanes uses a myth to demonstrate the nature of love, explaining that lovers are the two reunited components of single souls split in two by Zeus. This myth of soulmates is not as structured around ideas of heterosexual compatibility as you might presume. Aristophanes explicitly mentions same-sex relationships, but the important qualification is that they are between men of different ages. For Aristophanes, if not necessarily for Plato, sex between men and boys was not merely tolerable, but noble in itself. Of such people, Aristophanes says that “while they are boys…they fall in love with men, they enjoy sex with men and they like to be embraced by men. These boys are the ones who are outstanding in their childhood and youth, because they’re inherently more manly than others. I know they sometimes get called immoral, but that’s wrong: their actions aren’t prompted by immorality but by courage, manliness, and masculinity. They incline toward their own characteristics in others.” Worryingly for us, he says such men go on to become politicians.

What is fundamental to understand, of course, is that this form of relationship is only seen as good and honorable between men and teenage boys, while sexual behavior between men of the same age was taboo. This is an inversion of our own social norms. Today the defining characteristic of such a relationship to observers would be the abusive power imbalance. In the same manner, in Greek society it would also be the age difference that would be regarded as the core characteristic of the relationship, although in a positive way, and not the gender roles. 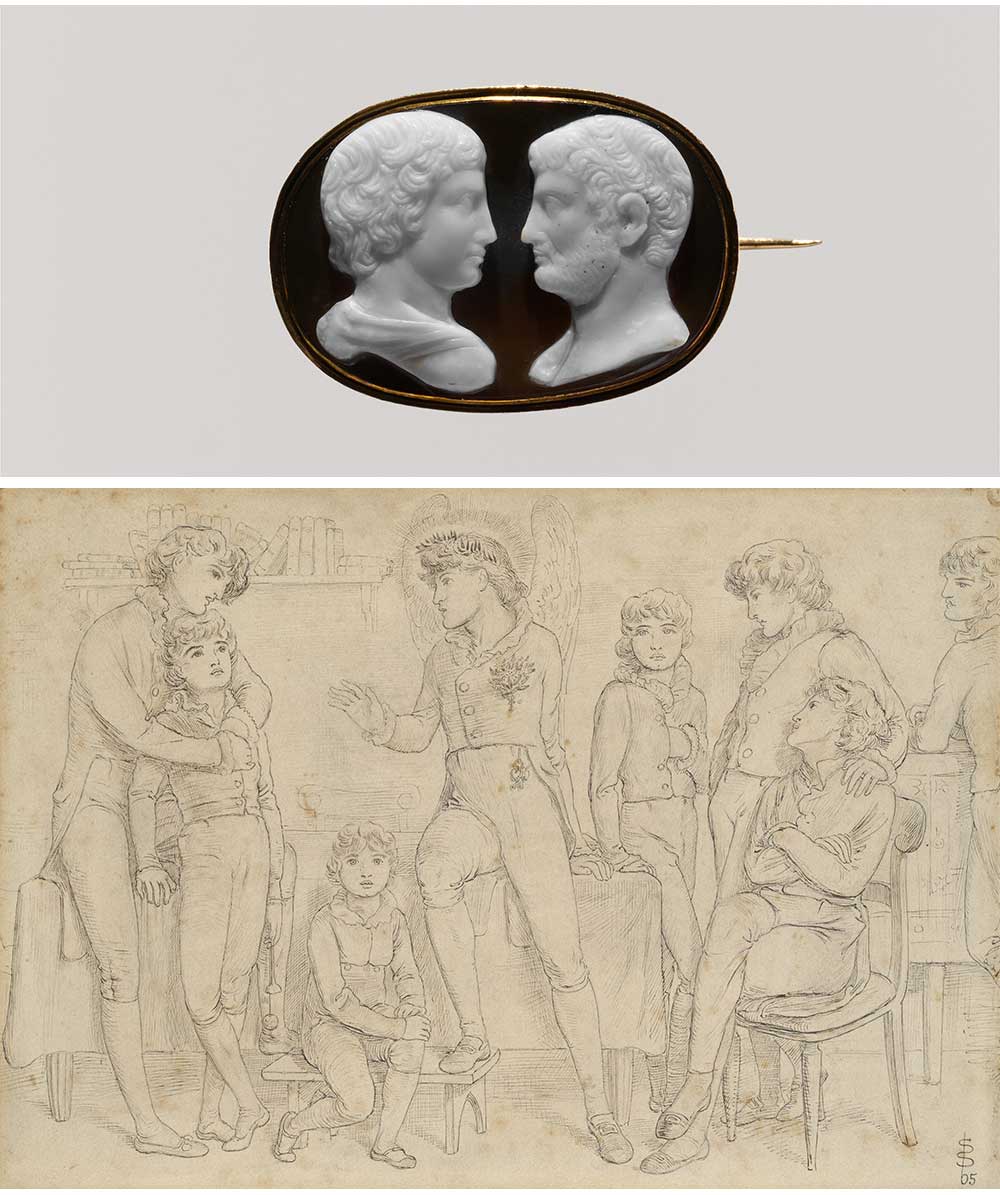 This form of pederastic relationship was seen to have many qualities; in the Symposium, Phaedrus suggests that the loyalty between male lovers and their aversion to being shamed in front of each other by acts of cowardice offered them a unique advantage in organizing a society, claiming that “the best possible organization [for a] battalion would be for it to consist of lovers and their boyfriends…A handful of such men, fighting side by side, could conquer the whole world.” In fact, such a battalion did exist in the city-state of Thebes. The Sacred Band of Thebes was a military unit made up of 150 pairs of male lovers and was regarded as the most elite unit in the Theban army, its soldiers being of unusual bravery and moral character.

The philhellenic Romans took up many of the same concepts and attitudes toward homosexuality, but with an important difference. While for the Greeks the pederastic relationship had a pedagogical and philosophical basis—to ensure the induction of noble males into the intellectual and political society they were to dominate—for the Romans the focus was instead on the sensual. Roman culture was openly celebratory of male dominance and power. There are no European cultures for whom the hard cock was such a symbol of worship; indeed the Vestal Virgins, the priestesses of Vesta, the goddess of the hearth, literally attended to the cult of Fascinus, a deity depicted as a disembodied erect penis, usually with wings. Their role was to tend to the holy fire at the center of Rome, from which any Roman citizen could light their own fire. As such, the fire symbolized the continuance of Rome and the integrity of the state. That a hard cock was one of the subjects of the Vestal’s adoration is no coincidence, as the integrity of the male body was a symbol of a free Roman’s political status. That’s because for a free man, a citizen of Rome, to be the penetrated partner in a same-sex act was, in some way, a violation of the integrity of his body. To be a free Roman meant your body could not be violated. In the words of historian Amy Richlin, “To be penetrated, for a Roman, was degrading both in a physical sense of invasion, rupture, and contamination, and in a class sense: the penetrated person’s body was likened to the body of a slave.” This emphasis on virility and conquest is slightly different to the Greeks’ obsession with pederasty and pedagogy, but to much the same ends.

When Marcus Calpurnius Bibulus accused his enemy and co-consul Julius Caesar of being “Queen of Bithynia,” the accusation was not that that Caesar was gay but that he had been fucked in his younger days by Nicomedes IV, the king of Bithynia. These accusations clearly stuck. Even in Caesar’s moment of triumph, having crushed the Gauls in the Gallic Wars, a popular rhyme in Rome began “Gallias Caesar subegit, Caesarem Nicomedes” (Caesar subjugated the Gauls, Nicomedes subjugated Caesar). As Richlin notes, it seems to be true what the senator Haterius said, that “unchastity [impudicitia: allowing anal penetration] is a source of accusation for a freeborn [male], a necessity for a slave, and a duty for a freed slave.” 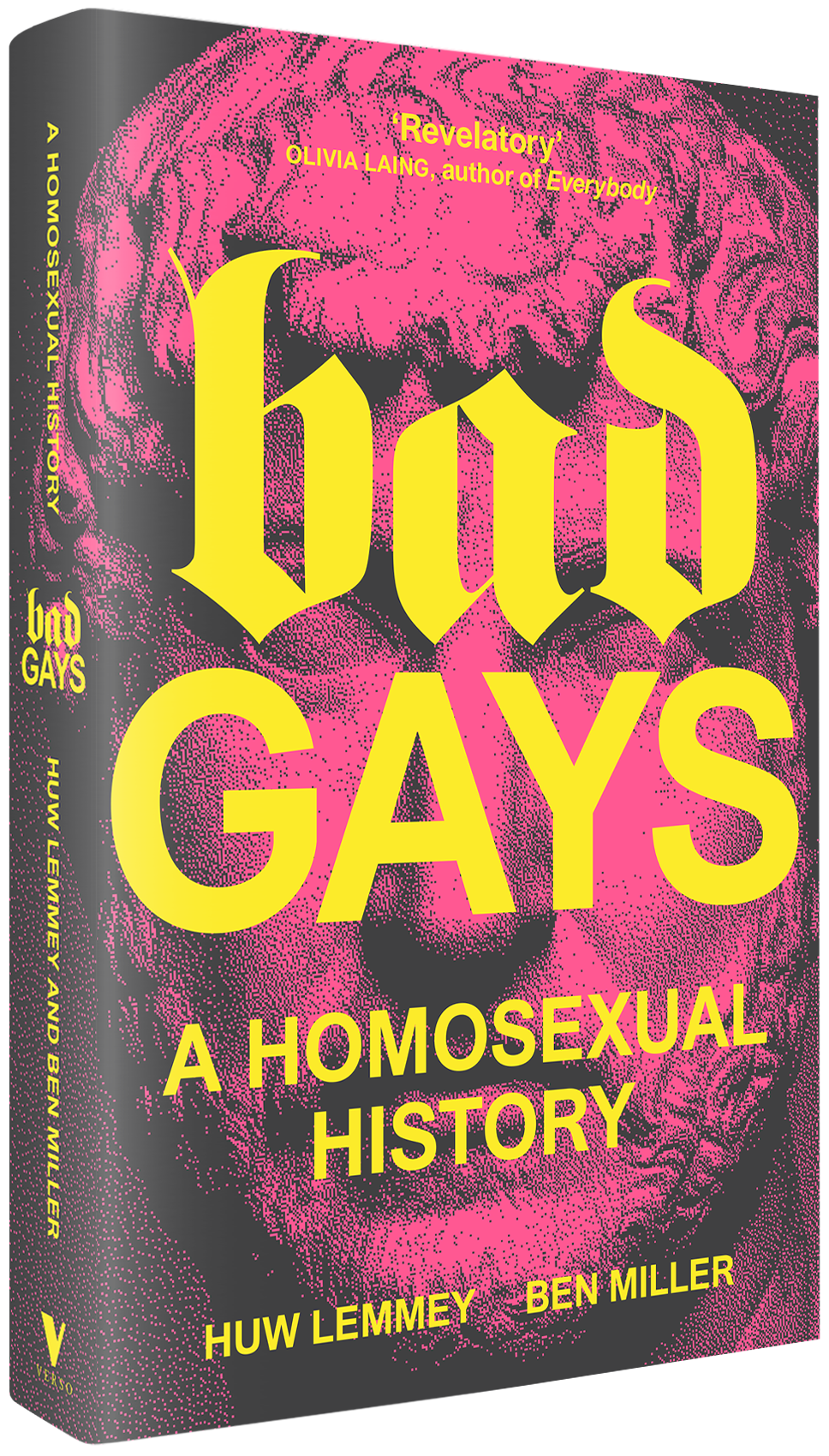 Huw Lemmey is a novelist, artist, and critic. He is the author of three novels: Unknown Language, Red Tory, and Chubz. He has written for the Guardian, Frieze, Flash Art, Tribune, The Architectural Review, Art Monthly, New Humanist, The White Review, and L’Uomo Vogue, among others. As an artist and filmmaker, he has shown work at the ICA, the Lux Biennial of Moving Images, Mumok Vienna, and the Design Museum, London.

Ben Miller is a writer and researcher living in Berlin, where he is currently a doctoral fellow at the Graduate School of Global Intellectual History at the Freie Universität. He has written for the New York Times, Literary Hub, the Los Angeles Review of Books, and Tin House and is the author of The New Queer Photography. He is a member of the board of the Schwules Museum, a queer museum and archive.