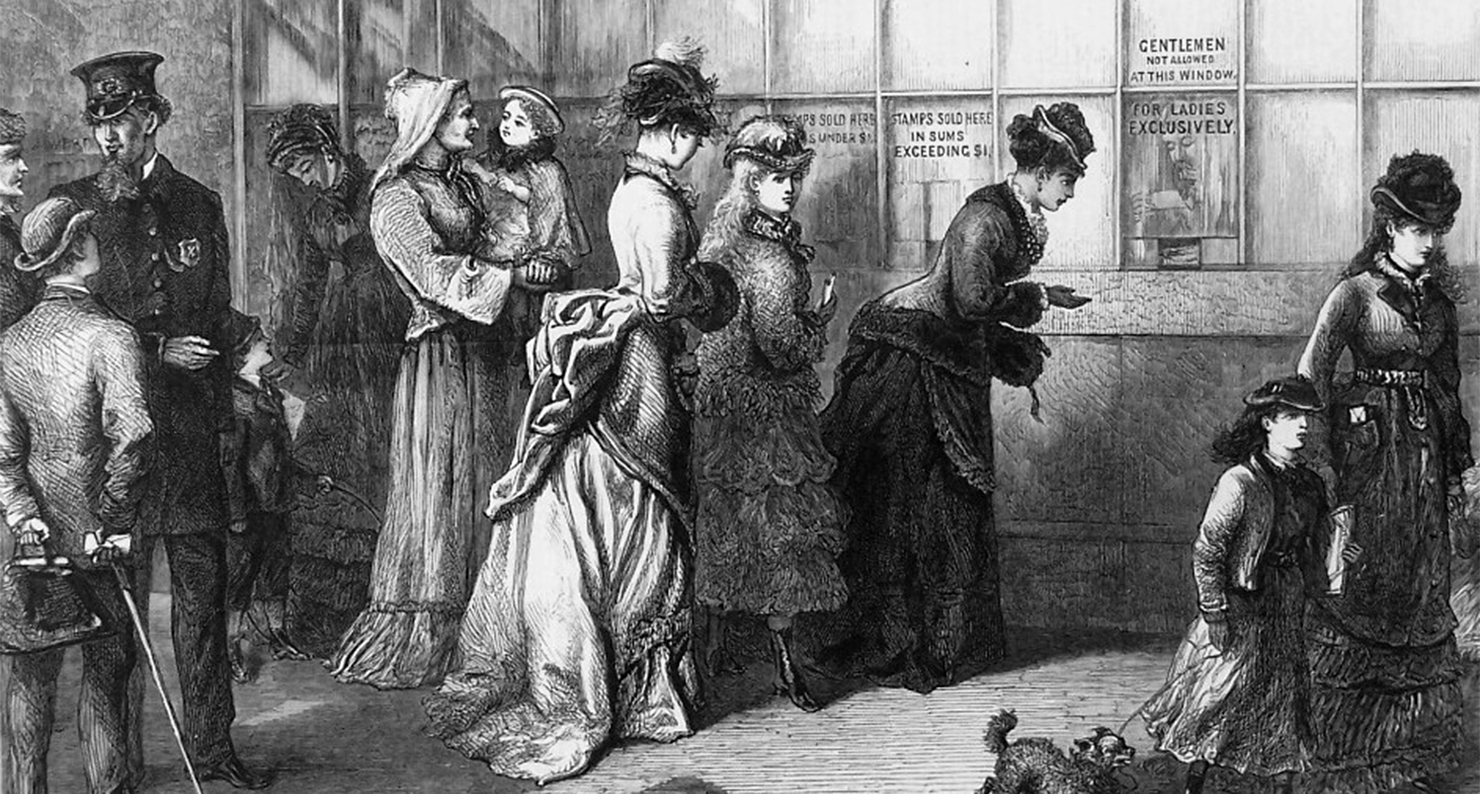 Communication of and by women has always struck fear into the hearts of men (see: novels; epistolary), but until the middle of the nineteenth century it was largely manageable—husbands and fathers, even servants, monitored a lady’s letters, and the wild fluctuations in cost of mail kept all but the wealthiest of girls and women from taking pen to paper on a regular basis. That changed with the standardization of postal prices in 1845. The cost of mailing a letter was reduced to three cents, making the mail accessible to working women, middle-class housewives, and schoolgirls with pocket money. Suddenly, wide swaths of women had access to two dangerous things—the mail and the post office. Anthony Trollope’s 1852 invention of the pillar-box had given British girls a chance to subvert the authority of their scandalized parents by mailing letters in secret, but their New York counterparts who visited the post office could both send and receive mail almost entirely unmonitored by those who might want to regulate their epistolary lives.

Located in the Middle Dutch Church at the intersection of Nassau and Liberty Streets (below), New York City’s original post office branch had previously played host to a Revolutionary-era prisoner-of-war camp as well as multiple religious congregations. It was, upon becoming a post office in 1845, an immediate disaster. Newspapers complained of its locational inconvenience, its rude staff, and its general wildness. What place was this for a lady?

As it turns out, yes, and a popular one at that. In an 1855 gossip column, “A Stranger in Gotham” tells the New York Times that a quick trip to the Ladies’ Window (top) left her enthralled, “so much interested in what passed before it came my turn to be served, that I drew into a corner, and, for half an hour, eyes and ears did me as good service as at any place of amusement that I have visited in the City.” The author describes the scene at the post office with bemused interest. For other publications, unescorted ladies meant chaos and no attempt was made to hide their concern for everyone’s virtue. ABlackwood’s Edinburgh Magazine report on women and children in America points out to its British readers that while the fair maidens of Europe must rely upon a town businessperson to mail and receive her letters, a girl in New York has a freer hand:

[She] has the privilege, if she chooses to exercise it, of her own private box or pigeon-hole at the post-office of the town where she resides, where she can have her letters addressed, and whither by a “Ladies Entrance” she can resort when she pleases and unlock her box from the outside, and take away her letters without observation.

It’s the lack of observation that made the New York Post Office such a source of fear—private communication is one thing, but to carry it out in a public space, away from the watchful eyes of protector figures, leaves women and girls open to assaults on their chastity, both in print and in person.

In The Great Metropolis: A Mirror of New York, an 1869 tour guide-cum-treatise on the modern city, war correspondent turned urban flaneur Junius Browne alluded to women’s peril in the at the hands of the postal system: “The stations are the favorites of intriguers of both sexes, and are frequently made rendezvous for interdirected communication and illicit pleasures.”

Like in Blackwood’s, the danger is implied—exactly what illicit pleasures comingling correspondents might fall into are left to the imaginations of the (likely) male readers of his work. Not all scribes were so coy. In his book The Women of New York, George Ellington (the pseudonym of an unidentified concerned citizen) explicitly warns of unscrupulous madams using the post office as a place to lure the “thousand school-girls a week that call there” into a life of prostitution:

Procuresses made it the business of forming the acquaintance of young, susceptible girls on their way from school. Waylaying them, they opened conversation, and gradually led their minds into the abnormal channels which the reading of sensational books, the conversation of sickly-sentimental companions and clandestine correspondence with unprincipled men inclined them.

Concerns about the post office were mitigated upon the construction of a new, more spatially regulated post office near City Hall, and upon the widespread introduction of home delivery by the Postal Service (prior delivery of mail to individual households was conducted by personal servants or private courier companies). Formally introduced in 1863 as a way to communicate news of Union soldiers, home delivery was available to most Manhattanites by the early 1870s, and its Congressional supporters were not unaware of the cult of vice surrounding urban post offices—Rep. John Palfrey of Massachusetts, when arguing for funding of home delivery, expressed concern for “the female of humble condition, who is compelled to go to a public place for the letter she is expecting, and await her turn to inquire for it, amidst the annoyance of a crowd.”

Still, the American woman’s taste for mail had not been satiated, and she continued to brave crowds and would-be assailants without intervention. After all, Browne reminds us: “Occasionally some unsophisticated citizen complains of such things through the newspapers, but New-York cares not for them. It is too busy to attempt to regulate the lives of persons to whom it is indifferent.”