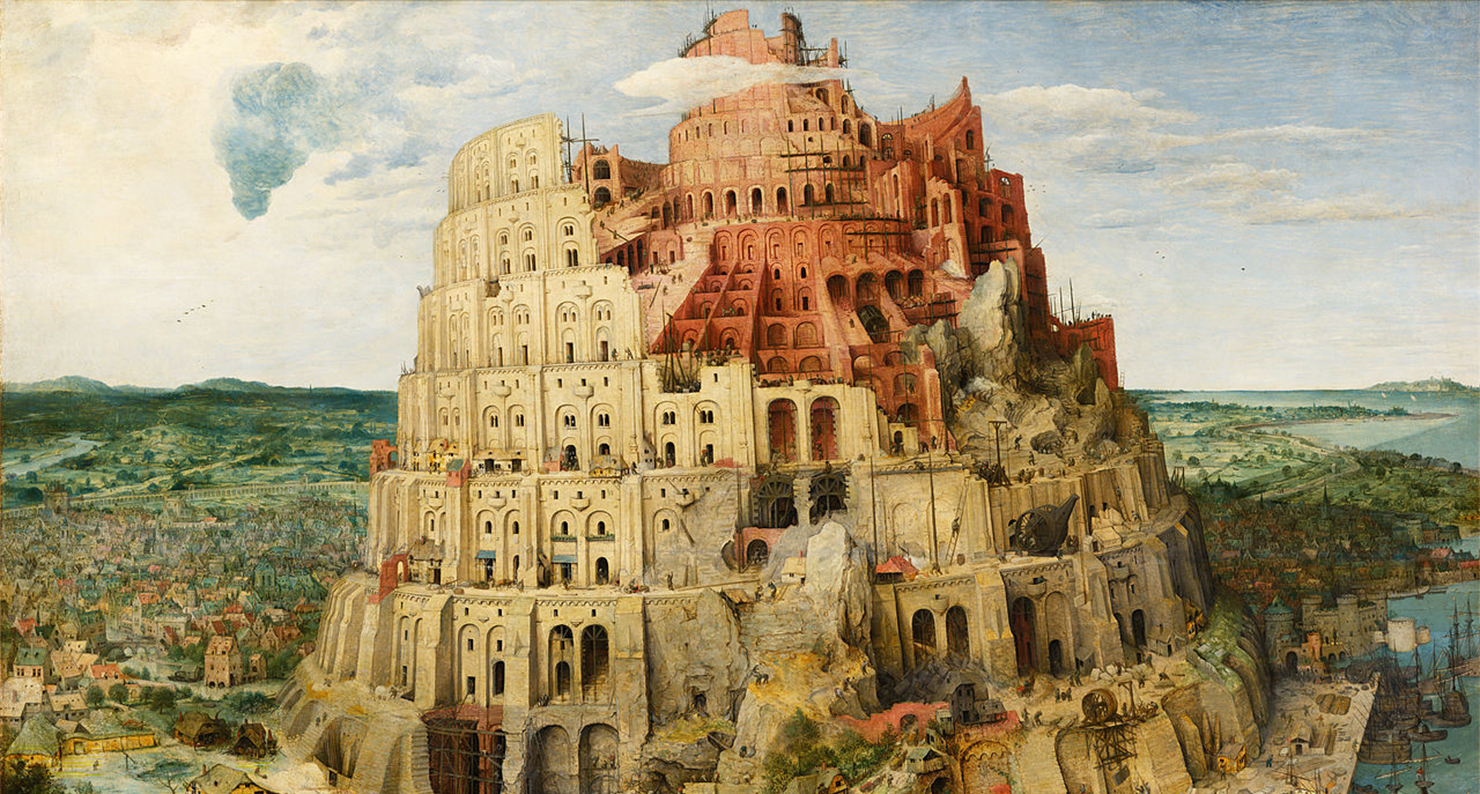 The Tower of Babel, by Pieter Bruegel the Elder, 1563. Kunsthistorisches Museum Vienna.

Babel No More: The Search for the World’s Most Extraordinary Language Learners
by Michael Erard
Free Press, 2012

Is That a Fish in Your Ear? Translation and the Meaning of Everything
by David Bellos
Faber & Faber, 2011

Everything from the profusion of cell-phone providers to the cacophony of presidential debates can be described as a “Babel” without much thought. But on the topic of world languages, the Biblical myth has more pervasive effects. If we think of the profusion of languages spoken in the world as a shameful thing, then we devalue the act of translation. We make language-learning a zero-sum game: one speaks a foreign language either like a native or not at all. And we set up a false David-and-Goliath dichotomy between English as the dominant world-language, and the polyglot muddle of everyone else.

Let’s begin with the myth of English supremacy. We might be forgiven for expecting a traditional, “How the King’s English Saved the Universe”-type narrative from David Crystal, who has been awarded the Order of the British Empire for “services to the English language.” In The Story of English in 100 Words, Crystal shares with us what he as a scholar knows better than anyone: English is a mess. It’s a celebration of how the language evolved and is still evolving by mistake, misunderstanding, and theft: “English is a vacuum cleaner of a language, whose users suck in words from other languages whenever they encounter them.” And it’s a good thing, too. At this point, about eighty percent of English vocabulary is non-Germanic in origin. Often single words contain multiple languages: think of combining the Anglo-Saxon verb “do” with “able,” a suffix of the French origin. Sometimes words from two competing cultures both survive in English when they evolve separate meanings, like “skirt” and “shirt”. In etymology, there are no straight lines: there’s just as much of the world in English as there is English in the world.

Despite its title, Babel No More also revels in the chaos of linguistic diversity. Author Michael Erard is inspired by the legend of nineteenth century-cardinal Giuseppe Mezzofanti, speaker of 72 languages—“the number of languages that was said to have resulted from the Tower of Babel’s fall”— as he goes in search of present-day hyperpolyglots. At first, Erard imagines a new superbreed of language learners, adept at cross-cultural communication, leading us closer to a universal, transparent, and Esperanto-like world before Babel. Instead, he discovers an endearing, misfit crew of outsider language-learners: a former computer programmer in Oregon who practices his Hindi by speaking along, out loud, with a tape while jogging in a park; a Brazilian martial artist trotted out on game shows; and, of course, ordinary Scandinavians. “I couldn’t escape the sense of that Alexander and Helen and all the others were somehow beyond expertise. Experts who hadn’t sought expertise. They loved languages, not as a writer or poet loves a turn of phrase, a way of making meter or rhyme; they loved them as objects—or, rather, they loved the encounters, both occasional and sustained, with those objects.” Erard discovers that those occasional encounters are just as important as the sustained ones. He dismisses the idea of the native speaker as a “weak standard,” because it doesn’t describe most multilingual people who learn the aspects of the language that they need for whatever their goals are—a little English here, a little Hindi there, a little Italian for safekeeping. Seen this way, Americans might even raise our famously low rates of language learning. Babel No More is obsessed with people who learn languages as foreign from theirs as possible, often just for the love of it.

David Bellos’ Is That A Fish In Your Ear? Translation and the Meaning of Everything promises to overturn everything you think about translation. In each chapter of this passionate treatise, Bellos, who runs the translation studies program at Princeton, busts fusty truisms we’ve all heard: that poetry and humor don’t translate, that no translation is as good as the original, that people taught a language by their mothers are the only native speakers, and that the Inuit have hundreds of words for snow. None of this, he contends, has anything to do with the actual, bustling translation business, be it in Chinese software manuals, reports for the European Union, or in international literary circles—where, Bellos memorably notes, poetry not only does get translated, it keeps almost the whole literary translation profession in business.

And that business has some fascinating trade secrets. Consider the “pivot languages,” in which a more-translated-into language acts as go-between for two lesser-translated languages. The Harry Potter series is widely translated from English into languages like Farsi and Icelandic, thus feeding the Google Translate database with information that can then be used to translate between Farsi and Icelandic. Bellos finds heterogeneity in some surprising corners. Yes, Swedish detective fiction was “infiltrated by an English-language device for the presentation of dialogue,” but it also had its revenge when Stieg Larsson conquered the bestseller lists. Centuries of ancient Greek knowledge would have been lost to the Latin West had it not been translated into Arabic first. English is a world language, Bellos knows, and getting more widespread every day, but make no mistake—the English that’s taking over the world is doing so with plenty of input from outside. It will not be the English of our dictionaries, and that’s okay.

The myth of Babel, Bellos argues, is not only outmoded but actually harmful. It endorses an idealized picture of all languages descending from a pristine single source, “like a cascade trickling down the mountainside of time, branching out into streams and rivers.” “The supposition of an original common form of speech has been taken to mean that inter-comprehensibility is the ideal of the essential nature of language itself,” which “makes translation a compensatory strategy designed only to cope with a state of affairs that falls short of the ideal.”

This vision of Babel “tells the wrong story,” explains Bellos. What the Bible passage actually reveals is that the ancient Sumerians, with whom the story originated, were already all too familiar with linguistic diversity in 3,000 BC. In this more positive model, translation “comes when some human group has the bright idea that the kids on the next block or the people on the other side of the hill might be worth talking to. Translating is a first step toward civilization.”

Brook Wilensky-Lanford’s essays and reviews have appeared in Salon, The New Republic, The Boston Globe, the San Francisco Chronicle, and elsewhere. She received her BA from Wesleyan University and an MFA in nonfiction writing from Columbia University. Wilensky-Lanford is editor in chief of the online literary magazine Killing the Buddha and teaches writing at Baruch College, the University of California at Berkeley, and the Writer’s Center. Her first book, Paradise Lust, was published in 2011.