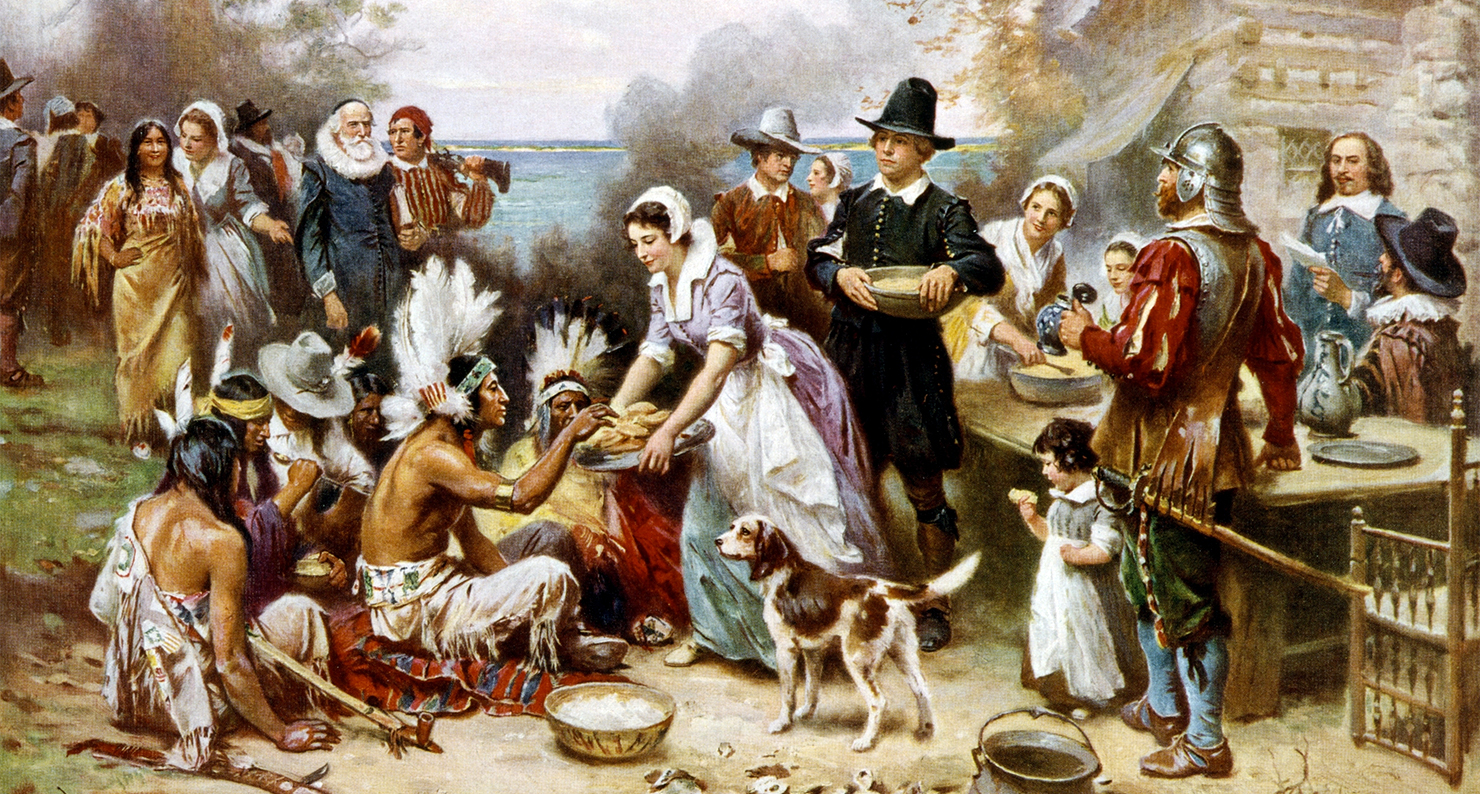 On January 6, 1678, members of the jury of the Plymouth Colony Court were summoned to view a dead body lying by the side of the road and to investigate the cause of the man’s demise. The body was identified as Thomas Lucas, and the court ruled in March that the cause of death was the result of “hee being very ancient & decriped in his limbes, and it being very cold, and having drunk some drinke, gott a volent fall into a ditch, in a very dangerous place, could not recover himslefe, but bruised his body, and lying all night in the cold, soe hee came by his end.”

By drunkenly falling into a ditch and expiring, Thomas Lucas made himself historically significant by being the first Plymouth colonist whose death was linked to alcohol consumption. The Plymouth Colony Court Records are filled with hundreds of cases related to alcohol sales and consumption, and before his death, Lucas had distinguished himself as a frequent character in these records: he was charged with the most alcohol-related crimes in the history of Plymouth Colony.

Thomas Lucas was a thorn in the Court’s side for nearly twenty years. His first appearance in court records was in October of 1658, and over the next four years he was fined for being drunk four times (usually at ten shillings a pop) and for retailing liquor without a license. In March of 1661 he was found guilty of being drunk again, and sentenced to pay twenty pounds in “surties for his good behavior.” Lucas’s pals John Wood and Gorge Bonum each ponied up ten pounds for the bond, but Lucas couldn’t stay straight for long. In May he was found with Thomas Savory’s wife Ann at his home “on the Lord’s day” at an unreasonable hour (while Church was in session). The Courts sentenced Ann to the stocks after she was found drunk “under a hedge, in uncivell and beastly manor.” Lucas was found guilty as well and had broken his bonds of good behavior, but the Courts weren’t sure how to punish him. They put off his case for further consideration.

Two years passed before Lucas entered the books again. In June of 1663 he was sentenced to be publicly whipped, but the order was stayed until the next time he was found to be drunk, which occurred less than a year later. In June of 1664 he was summoned again to the court to answer accusations that he had abused his wife, as well as “railing and reviling others,” and disturbing the peace, and sentenced to sit in the stocks. The next year he was fined ten shillings for being drunk—barely a slap on the wrist after years of increasingly severe punishments.

For a while it seemed that Lucas was back on the wagon. His next appearance in the records is not until 1673, almost nine years later, when Lucas was found drunk and released with an admonition. A year later Lucas was back again and the courts had finally had enough, and decided to make their serial drunkard the town’s problem. They found that Lucas “being distempered with drinke, it being so oftens, and that hee hath borne severall particular punishments gradually, and can not be reclaimed, it was ordered concerning him, that all that sell drinke be strickly ordered and prohibited to lett him have none.” Anyone who served Lucas booze was now also breaking the law. In October of 1675, Lucas was whipped publicly for his drinking, and this was his final punishment—he does not appear in the records again until he was found dead in 1678.

Considering how busy Lucas kept the Plymouth Colony Court, and how exasperated and at a loss they seemed at times for what to do with him, they were remarkably composed and even-handed in the ruling of his death. They didn’t call him a drunk, they didn’t even say he had been drunk, which was a crime in Plymouth Colony. Instead, they reported with a sad, poignant tone that he was old and frail, had been drinking, and had fallen in the cold and could not get up.

Reading the Plymouth Colony Court Records for the cases relating to alcohol consumption is a little bit like reading today’s tabloids, which in recent years have focused more and more on troubled stars and their court dates for drug use and DUIs. There are certain names that show up repeatedly in the records, and their cases stand out from the norm, like those of Thomas Lucas and Francis Sprague, an innkeeper who would regularly lose and reapply for his license to sell booze.

In many ways little has changed since then. Plymouth’s struggle to regulate alcohol produces a clearer picture of the settlement and its development, and it also shows that our own approach to treating drug and alcohol cases is incredibly similar. The punitive approach had little effect then, and it has little effect now.

Plymouth Colony was established in 1620 with the landing of the Mayflower on the long arm of Cape Cod, and it was dissolved into the Province of Massachusetts Bay in 1691. This seventy year period saw the establishment of a strong colonial government, war and peace with the natives, and it also established the Puritan faith in at the heart of early America, in which the Church was an established social order where members obeyed God—and looked out for each other to do the same. Our collective mythmaking about the Pilgrims and their pious conservatism does not make room for this image of the colony. Pilgrims are hard-working, religious, pious people to us, and Americans are intoxicated with this puritanical vision of past. We don’t see Plymouth as a party town, but as the birthplace of our best selves.

And yet alcohol was everywhere. The Mayflower had been stocked with more beer than water, as well as cider, wine, and aqua vitae, a form of distilled brandy. The first Thanksgiving included thanks for a successful barley crop, which allowed for the brewing of beer, and aqua vitae, or “strong water,” was used to smooth over discussions with the Wampanogs. Alcohol was essential to the survival of the colony, both as a drink and a currency, and a great deal of energy and time was dedicated to lawmaking and law enforcing surrounding the making, selling, and drinking of alcohol.

The Plymouth Colony Court Records begin in 1623, but don’t discuss regulation of alcohol until ten years later, when John Holmes, a regular drinker, finally pushed the court to act. Holmes was “censured for drunkenness, to sitt in the stocks, & amerced in twenty shillings fine.” This steep punishment suggests that Holmes must have experienced quite the bender.

The law he had broken? There was none in the Court records at the time. But two months later in July the court ruled, “That the person in whose howse any were found or suffered to drinke drunck be left to the arbitrary fine & punishment of the Govr & Cowncell, according to the nature & circumstance of the same.” Now it was illegal to be drunk, and illegal to allow a person to get drunk in your home.

As the Plymouth Colony grew, the courts granted licenses to make and sell liquor. Colonists could distill liquor and brew beer in their own houses, and those with licenses could serve to travelers and strangers passing through the colony. They could drink in taverns (called inns or ordinaries), which were also used as meetinghouses, but they could not be charged for the liquor. When Governor William Bradford was replaced in 1646 by Governor Winslow, sentences for drunkenness were standardized and rates of excise for retailers and taverns were established. Before Winslow, what was considered drunk was determined on an individual basis. That changed in 1646 when the court defined what it meant to be drunk, ruling, “And by drunkenness is understood a person that either lisps or falters in his speech by reason of overmuch drink, or that staggers in his going or that vomits by reason of excessive drinking, or cannot follow his calling.” The number of licenses given to taverns jumped from three between 1633 and 1643 to thirteen between 1644 and 1654. With these openings, the number of charges of drunkenness dropped by almost half. Therein is the crux of Plymouth’s drinking problem: as the Colony’s profits from excise taxes increased, the government’s prosecution of it’s own laws relaxed, as did the sentencing for pilgrims with alcohol problems.

By the time Plymouth was dissolved in 1691, the retail of alcohol was an essential stream of money for the government. Taverns themselves went through an evolution, eventually becoming “houses of entertainment.” With a booming population of 7,000, the courts could no longer keep up with all of the cases related to alcohol consumption.

Drinking culture is, and always has been, a cornerstone of American society. The pilgrims have something to do with the failure of Prohibition in the twentieth century. You might raise a glass to them in thanks on Thanksgiving, but don’t thank them for being our role models. The pilgrims are our ancestral drinking buddies.

A.N. Devers is a writer, an editor, and a teacher. Her work has appeared in Bust, Departures, Slice, The Southampton Review, Time Out, Tin House, and the Washington Post and online at Electric Literature, The New Yorker, and The Paris Review, among other publications.