About some three or four years before this time, there came over one Captain Wollaston (a man of pretty parts) and with him three or four more of some eminency, who brought with them a great many servants with provisions and other implements for to begin a plantation; and pitched themselves in a place within the Massachusetts which they called, after their Captain’s name, Mount Wollaston. Among whom was one Thomas Morton, who, it should seem, had some small adventure (of his own or other men’s) among them, but had little respect among them and was slighted by the meanest servants.

Having continued there some time and not finding things to answer their expectations, nor profit to arise as they looked for, Captain Wollaston takes a great part of the servants and transports them to Virginia, where he puts them off at good rates, selling their time to other men to work on tobacco plantations and writes back to one Mr. Rasdall, one of his chief partners and accounted their merchant, to bring another part of them to Virginia likewise, intending to put them off there as he had done the rest. And he, with the consent of the said Rasdall, appointed one Fitcher to be his lieutenant and govern the remains of the plantation till he or Rasdall returned to take further order thereabout.

But this Morton above said, having more craft than honesty, in the others’ absence watches an opportunity (commons being but hard among them), and got some strong drink and other junkets, and made them a feast; and after they were merry, he began to tell them he would give them good counsel. “You see (saith he) that many of your fellows are carried to Virginia, and if you stay till this Rasdall return, you will also be carried away and sold for slaves with the rest. Therefore I would advise you to thrust out this Lieutenant Fitcher, and I, having a part in the plantation, will receive you as my partners and consociates; so may you be free from service, and we will converse, trade, plant, and live together as equals and support and protect one another,” or to like effect. This counsel was easily received, so they took opportunity and thrust Lieutenant Fitcher out of doors and would suffer him to come no more among them. 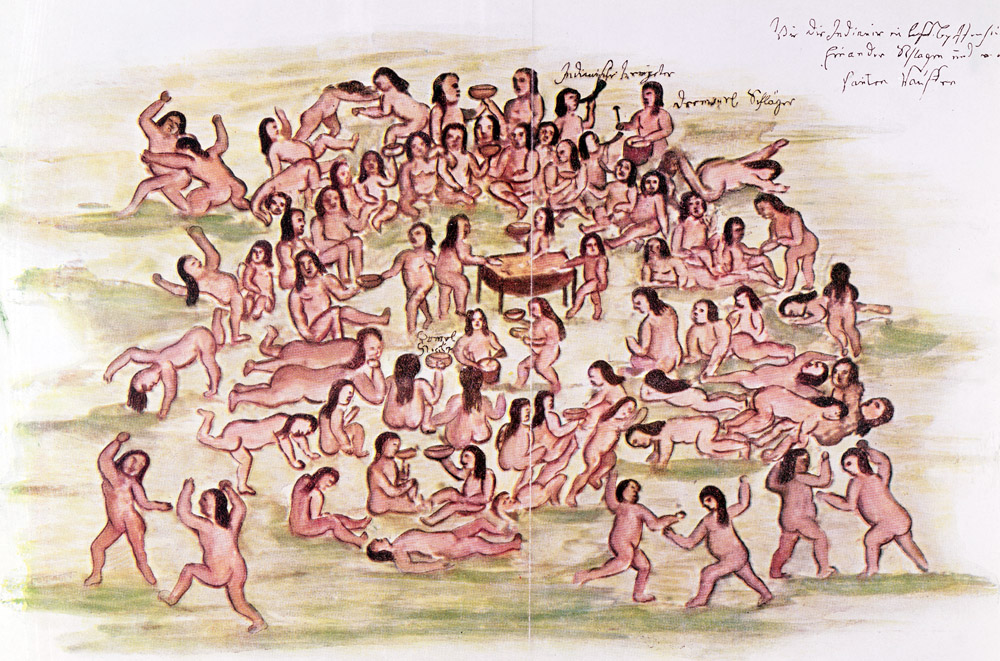 The Effect of Alcohol on the Indians in the Time of the Conquest, by Florian Paucke, 1749–1767. © Museo de America, Madrid, Spain / The Bridgeman Art Library.

After this they fell to great licentiousness and led a dissolute life, pouring out themselves into all profaneness. And Morton became lord of misrule and maintained (as it were) a school of atheism. And after they had got some goods into their hands and got much by trading with the Indians, they spent it as vainly in quaffing and drinking both wine and strong waters in great excess, and, as some reported, ten pounds’ worth in a morning. They also set up a maypole, drinking and dancing about it many days together, inviting the Indian women for their consorts, dancing and frisking together (like so many fairies, or furies, rather) and worse practices, as if they had anew revived and celebrated the feasts of the Roman goddess Flora, or the beastly practices of the mad Bacchanalians. Morton likewise (to show his poetry) composed sundry rhymes and verses, some tending to lasciviousness, and others to the detraction and scandal of some persons, which he affixed to this idle, or idol, maypole. They changed also the name of their place, and instead of calling it Mount Wollaston, they call it Merrymount, as if this jollity would have lasted ever.

But this continued not long, for after Morton was sent for England Mr. John Endecott, who brought over a patent under the broad seal, for the government of the Massachusetts, who, visiting those parts, caused that maypole to be cut down and rebuked them for their profaneness and called it Mount Dagon.

From Of Plymouth Plantation. Bradford took part in negotiations with investors to secure funding for the Mayflower and sailed in 1620 to “those vast and unpeopled countries of America,” where he soon became governor of the Plymouth Colony. Although Morton erected a maypole in his colony and traded liquor and firearms to the American Indians in exchange for fur, the charges brought against him, which caused him to be exiled, were not substantive. He later returned, challenged the Massachusetts Bay Company’s attempt at a fur monopoly, and was again deported.

Tasting the Sweet and Sour