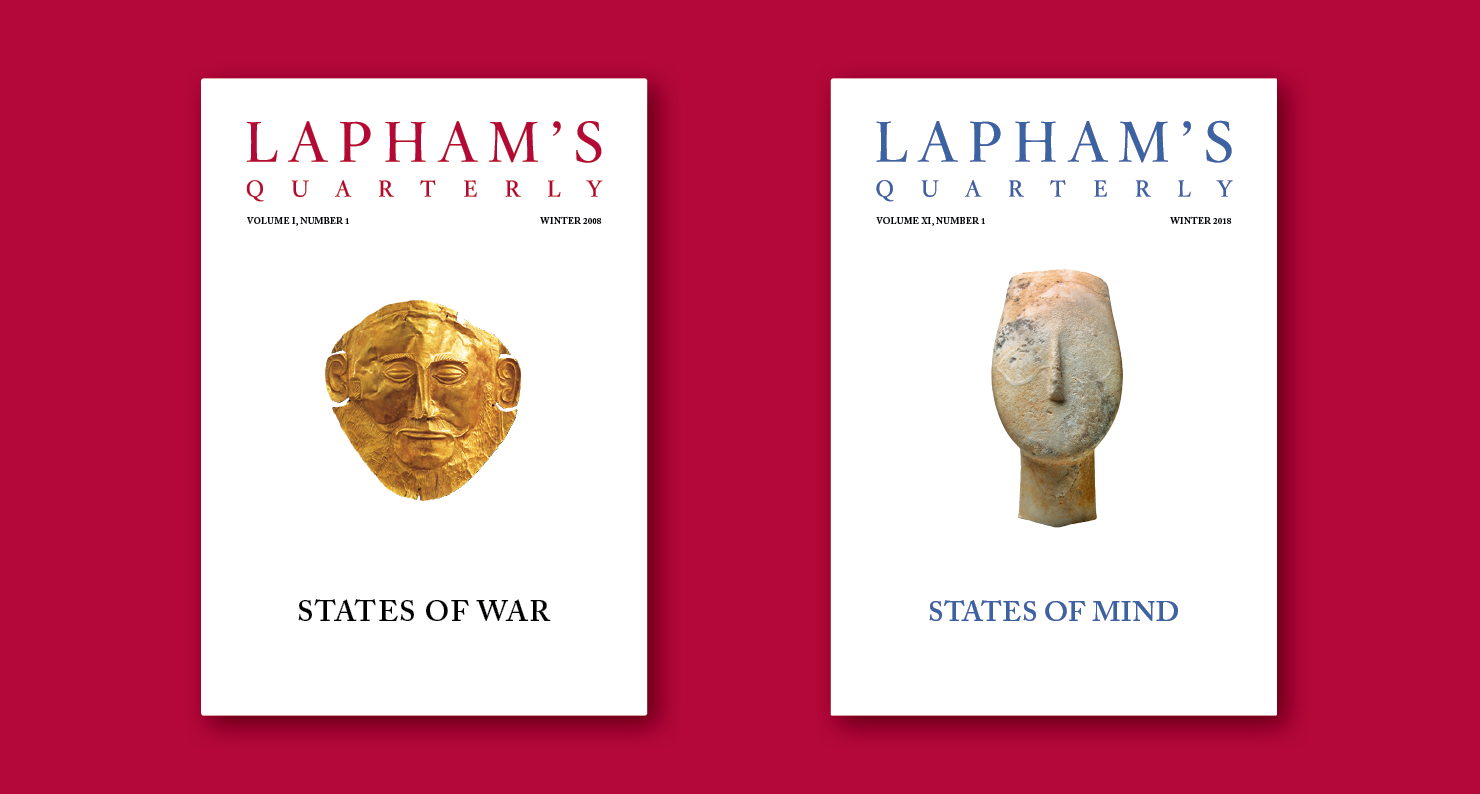 The first issue of Lapham’s Quarterly, States of War, and the tenth-anniversary issue, States of Mind.

The first issue of Lapham’s Quarterly, States of War, was published in the winter of 2008. With States of Mind, a second decade of the Quarterly begins.

In his preamble to our winter 2018 issue, Lewis H. Lapham reflects upon the first ten years of the magazine.

The contributors marking this tenth-anniversary issue of Lapham’s Quarterly regard the mystery of consciousness not as a problem to be solved but as a wonder to behold. The approach is the Quarterly’s own. The all but infinite extent of human ignorance—about the nature of our own minds, as about most everything else in the universe—is the provocation that rouses out the love of learning, kindles the signal fires of memory and the imagination, turns to the lessons of history. We have no other light with which to see and maybe recognize ourselves as human beings. The catching and reflecting of that light has been the Quarterly’s unscientific method for each of its forty previous issues, all of them focused on the shifting states of mind that underwrite the coming and going of wars and wealth and monuments.

Napoleon still on his horse at Waterloo, Queen Victoria enthroned in Buckingham Palace, the subcontinent fixed to its mooring in the Indian Ocean—but as to the light in which Napoleon, the queen, or India are to be seen, accounts differ.

To consult the record in books both ancient and modern is to come across every vice, virtue, motive, behavior, obsession, joy, and sorrow to be met with on the roads across the frontiers of the millennia. What survives the wreck of empires and the sack of cities is the sound of the human voice confronting its own mortality, points of light flashing in the gulf of time on scraps of papyrus and scratchings on stone, on ship’s logs and totem poles, on bronze coins and painted ceilings, in confessions voluntary and coerced, in five-act plays and three-part songs. The story painted on the old walls and printed in the old books is our own.

It’s been said that over the span of nine months in the womb, the human embryo ascends through a sequence touching on over three billion years of evolution, that within the first six years of life, the human mind stores subjective experience gathered in what is now believed to be the nearly 200,000 years of its existence. How subjective gatherings of consciousness pass down from one generation to the next, collect in the pond of awareness that is every newly arriving human being, is another lobe of the mystery the contributors to this issue of the Quarterly leave intact.

Subscribe now and receive States of Mind as your first issue.