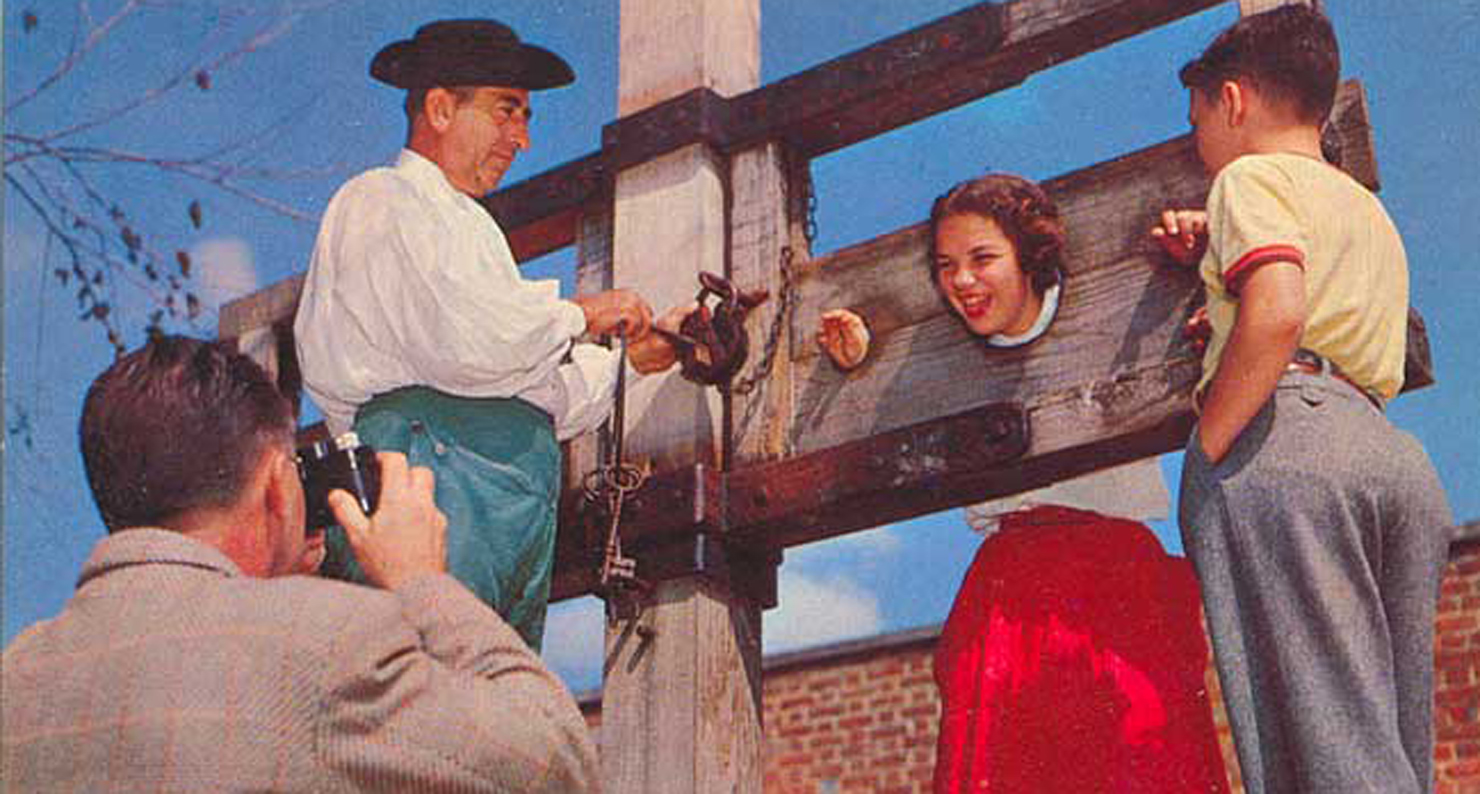 Postcard depicting a family on vacation at Colonial Williamsburg, c. 1964.

To get dressed in 1848, you have to put your socks and shoes on first. Then comes your underwear, corset, petticoats—thirteen if you’re pursuing the height of fashion—then the skirt, and finally, your bodice. If you try to put your shoes on last, as we do today, you will find you have made a mistake. You can’t bend over with a corset on and your feet are fully lost in the fluff of your skirts.

This knowledge is just one of the many lessons I learned while working as a first-person interpreter at a historic village in rural Ohio. “First person,” sometimes known as “living history,” is a museum-teaching technique where educators are in costume and in character, and the historic site is set to a specific year.

Our year was 1848. Several historic houses had been moved from northeast Ohio and arranged around a village green: this was our fake town. Visitors were free to roam the site, spending as little or as much time as they choose interacting with its townspeople. A family was cast in each house, and I “lived” with an older brother and sister, an Irish maid, and my mother—in this case played by my actual mother, one of the museum’s middle managers, who had decided when I turned seventeen that I was too old to sit on my ass over summer vacation. From June through August I spent more waking hours of my life in the nineteenth century than I did in the modern day.

After we pulled on our costumes each morning and hiked from the modern basement break room to our assigned houses, the day always began by lighting the stove. The cast iron stove, a temperamental beast that had been around much longer than any of us, was first fed newspapers, kindling, and then firewood we had chopped ourselves. The smell of wood smoke permeated every fiber of our clothes, our food and that house. You never noticed it while you were at work, only once you got home at the end of the day. Suddenly, you stank, as though the modern era were rejecting you.

Although I already knew how to cook, I had to relearn to be a cook in a nineteenth-century kitchen. When cooking in the contemporary era, doneness is an equation of time and temperature: you set your oven temp, you set the timer, and you return when the beeps tell you dinner is done. In 1848, you decide by touch if the oven is hot enough, by memory how long the food should take to cook, and by sight and smell if it’s done.

The quiet hours of the morning always began around that stove with my fake family, the smells of wood smoke and coffee, the head-scratching as we deciphered 150-year-old recipes. We learned how the nineteenth century tasted in that kitchen, of mace and marjoram, rosewater and savory. Sometimes our pound cakes emerged from the oven the very image of domestic success; other times, they were lopsided and scorched. Both were lessons.

We were seldom alone with our mistakes. The whole point of the living history experience is that on any given day, hundreds of visitors are wandering the museum grounds, looking to be entertained. I think there is a lot of cringing and eye-rolling at the idea of costumed interpreters, but my coworkers were exceptional at their jobs. A tentative guest would enter, then another. Soon, they were seated in the sunny sitting room, maybe with a glass of lemonade. There might be music on the pianoforte, talk of politics, or we’d just trade stories for as long as they wanted to keep asking questions. Hours could pass before they left.

Mornings began with a family meeting to discuss what we were going to talk about that day. What was happening that day in 1848? Were we reading something interesting? Was there trouble among the family? I taught myself photography, painting, and recipes for beauty tinctures. Some days, I went to singing school, milked cows, or begged my brother to play games outside. Everything was designed to teach a lesson to the museum visitors, but by completing each of these tasks, I was learning a lesson about another way of life.

Some days were special in different way. In an effort to portray every aspect of the nineteenth century, we elected to spend a weekend interpreting a child’s funeral. I still remember the heat and closeness of the darkened parlor, where I sat with my fake family viewing the closed casket of my fake nephew. My black wool dress itched as public visitors came and offered condolences, and the room smelled heavily of rosemary and tansy, herbs use to control the smell and keep away flies. I will never forget when my brother helped me put on my bonnet and lowered my long black veil to cover my face before we left the house to go to the cemetery. It was so real—and it was not real at all.

Although the busy public season would end in August, the year officially concluded with a nighttime holiday program. When the last tour was ushered out into the crisp evening, we’d crowd around a crackling fireplace and raise glasses of punch; my brother would lead a toast to the New Year. We’d blow out the oil lamps, lock up the house one last time, and walk out into the snowy night.

But the year 1849 never came, like a living history version of Groundhog Day.

However, each 1848 was never quite the same as it had been the year before. The historic milestones were there—the iconic, proto-feminist meeting at Seneca Falls—but what had happened in our own fictional timeline changed our memories and our story for the next year. We were all a year older, and the next summer the same visitors would often come back to visit us again to see how the story had developed.

As the years went on, members of my faux family moved on to other jobs, and usually their roles were retired, their absences written into our story. When my oldest brother and the Irish maid left at the same time, we decided they had eloped. The family was scandalized. My sister eventually left when her husband decided to depart for the Oregon territory: it was a six-month voyage by ship, and she would lose a child who was buried at sea around Cape Horn. And me, I married a suitor from Virginia and moved far away from Ohio.

In reality, I had left for life in New York City, building a career around my blog, Four Pounds Flour, that looked at the past through the lens of food. Often I took on the diets of people from the past for days or weeks at a time, which stemmed from my beginnings in first person interpretation. Living in the past all those years taught me that history is three dimensional; you can only begin to understand it by trying to experience it with all of your senses. After a day spent drinking like a Colonial American, the resulting blog post ended up on the desk of an editor at Simon & Schuster, and I landed a book deal. My high school job had become my career.

The end of my connection to the museum was a sad one. I returned one last time, a decade after I had left, with the task of helping my mother move out. After eleven years of employment, she was the last holdout in a long line of employees that had been fired or pushed out as the institution went into decline. It was a gray day in December, and there was no family left to toast the end of the year. The house that had contained so many memories for me was only a husk.

But to this day, I still live my life in two timelines, and at a moment’s notice 1848 will come rushing back to me. It will be in a bite of a nutmeg-laden dessert, and suddenly I am in that kitchen, struggling with the wood-burning stove. Or, it will be in a whiff of rosemary, and I’m in the darkened parlor, mourning the death of a child. My life in 1848 gifted me with the ability to time-travel whenever I please. It gave me the curiosity to wonder what the past was like and the bravery to put on my petticoats and try it out.