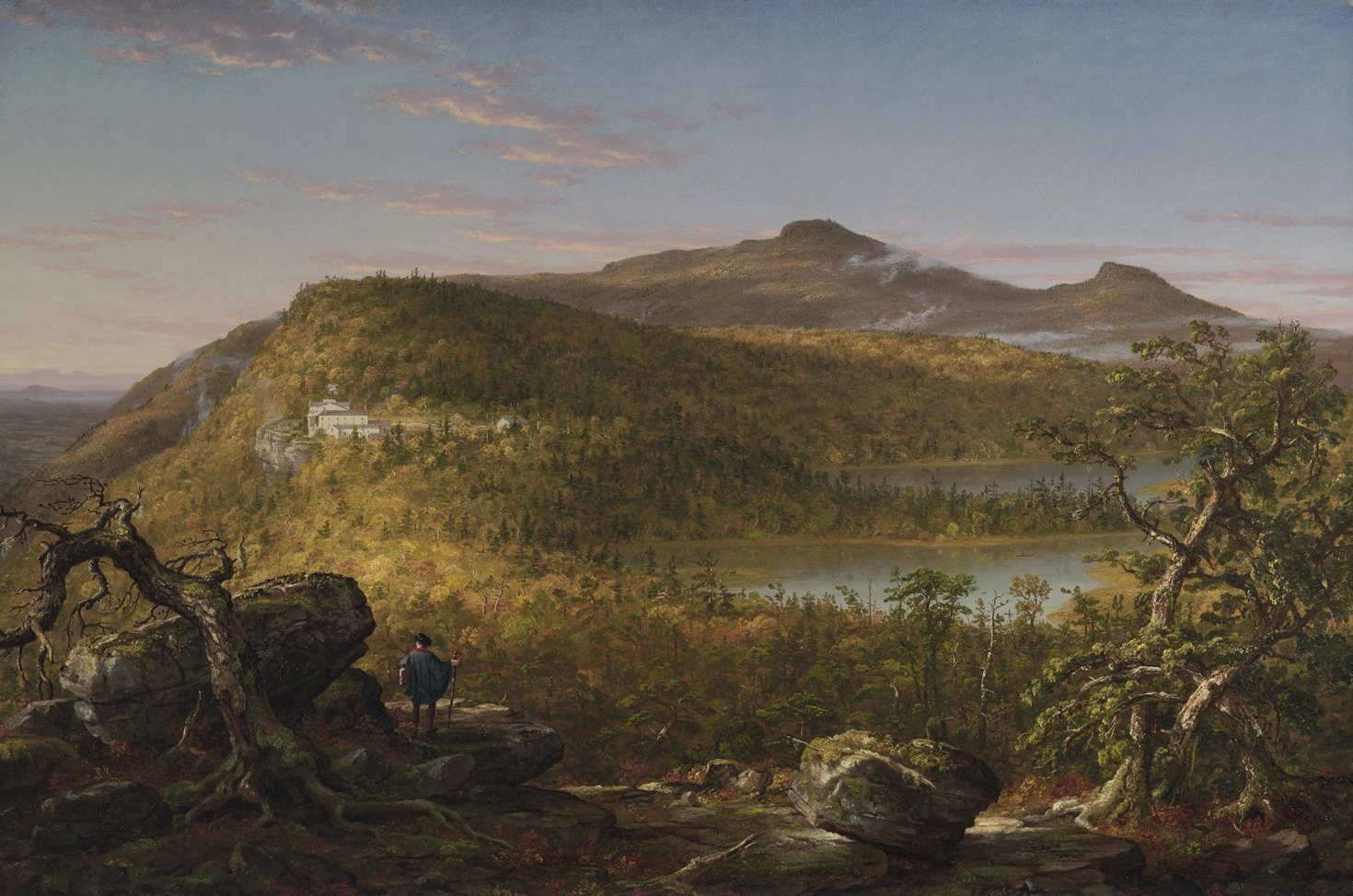 “Good Reader!—expect me not to describe the indescribable…It was a vast and changeful, a majestic, an interminable landscape; a fairy, grand, and delicately colored scene, with rivers for its lines of reflections; with highlands and the vales of states for its shadowings, and far-off mountains for its frame.” So wrote the young American poet Willis Gaylord Clark in the Knickerbocker magazine upon returning from his 1837 summer vacation at a grand hotel on the outskirts of Catskill, New York, about 110 miles upriver from New York City. Like those who had come before and the many who would come after, Clark reached the Catskill Mountain House after an arduous steamboat-to-stagecoach journey. Gazing at the building’s white-columned facade, he was bewitched by the “earth’s one sanctuary”—a biblical allusion to the tranquil city of Shiloh. “My name was on the book,” he added, and he checked in.

Earlier this fall, a leather-bound guest register for the Catskill Mountain House, covering the years 1839–43 and 1846–52, surfaced at auction in New York. Because I live near the hotel’s former location, which still charms hikers and artists, I was immediately intrigued and began brushing up on its history. I couldn’t help but leap at Clark’s reference to a book and the porter who asked after his bags, even though the book on auction wasn’t the one he might have signed upon arrival, indicating his room number and how long he would stay. That ledger appears to be lost to history, as this one was thought to be until the great-grandchild of someone who had worked at the hotel consigned it to auction.

Jonathan Palmer, archivist and deputy historian at the Greene County Historical Society (GCHS), told me he suspected the register was just one of many things that “got away” during the hotel’s fading and final years, before the New York State Department of Environmental Conservation acquired it and burned it to the ground in 1963 after years of ruin. The GCHS, headquartered in nearby Coxsackie, New York, has long owned four consecutive Catskill Mountain House registers, the earliest beginning in 1854, as well as room-assignment books and related ephemera. Palmer had believed those four were the only ones left. “So it was a big shock for us all to find out that there was this other ledger that’s out there and available,” he said prior to the auction. “We’d love to own it…it would be bringing something home for us. It’s a part of our story that’s very near and dear.” The GCHS planned to bid, but Palmer didn’t have high hopes of acquiring the ledger.

If the volume were of interest only to local historians, a bid in the hundreds might have been a reasonable estimate and Palmer more optimistic. But the Catskill Mountain House was famous on a national scale. The hotel was built in 1823 on the western flank of the Hudson, perched on a plateau between two peaks and two lakes. When it opened in the summer of 1824, it was the “nation’s first mountain resort,” wrote Roland Van Zandt in his definitive history of the Catskill Mountain House, the first of many Catskills grand hotels that dotted the area. Eventually growing to 3,500 acres under the management of Charles L. Beach, the Mountain House offered the kind of travel and leisure that appealed to the American zeal for rugged natural environments.

“I don’t think I’ve ever had a hotel register approaching this significance,” said Rick Stattler, director of books and manuscripts at Swann Galleries, who supervised the sale. Typically, something of this kind is valued for its autographs, i.e., who slept there and signed in, he explained. (Similar hotel registers that have sold at auction in recent years bear this out: a Denver hotel logbook, dated 1904, containing the signature of Confederate outlaw Cole Younger sold for $1,673, while a mid-nineteenth-century register for Jamestown House in New York featuring editor and publisher Horace Greeley’s inscription raised just $450.) This worn folio logs twenty thousand names: doctors, lawyers, and nineteenth-century luminaries including cabinetmaker Duncan Phyfe, future senator Charles Sumner, and author Henry Wadsworth Longfellow and his wife Fanny. In other years, the hotel hosted Harriet Martineau, Ulysses S. Grant, and Oscar Wilde.

For historians, the utility of this type of record can lie in the less flashy names. A guest register could help researchers who are documenting the rise of American tourism, examining Victorian-era diets (one local historian claims the Mountain House really pushed the mutton), or tracing one person’s comings and goings for historical or genealogical purposes. 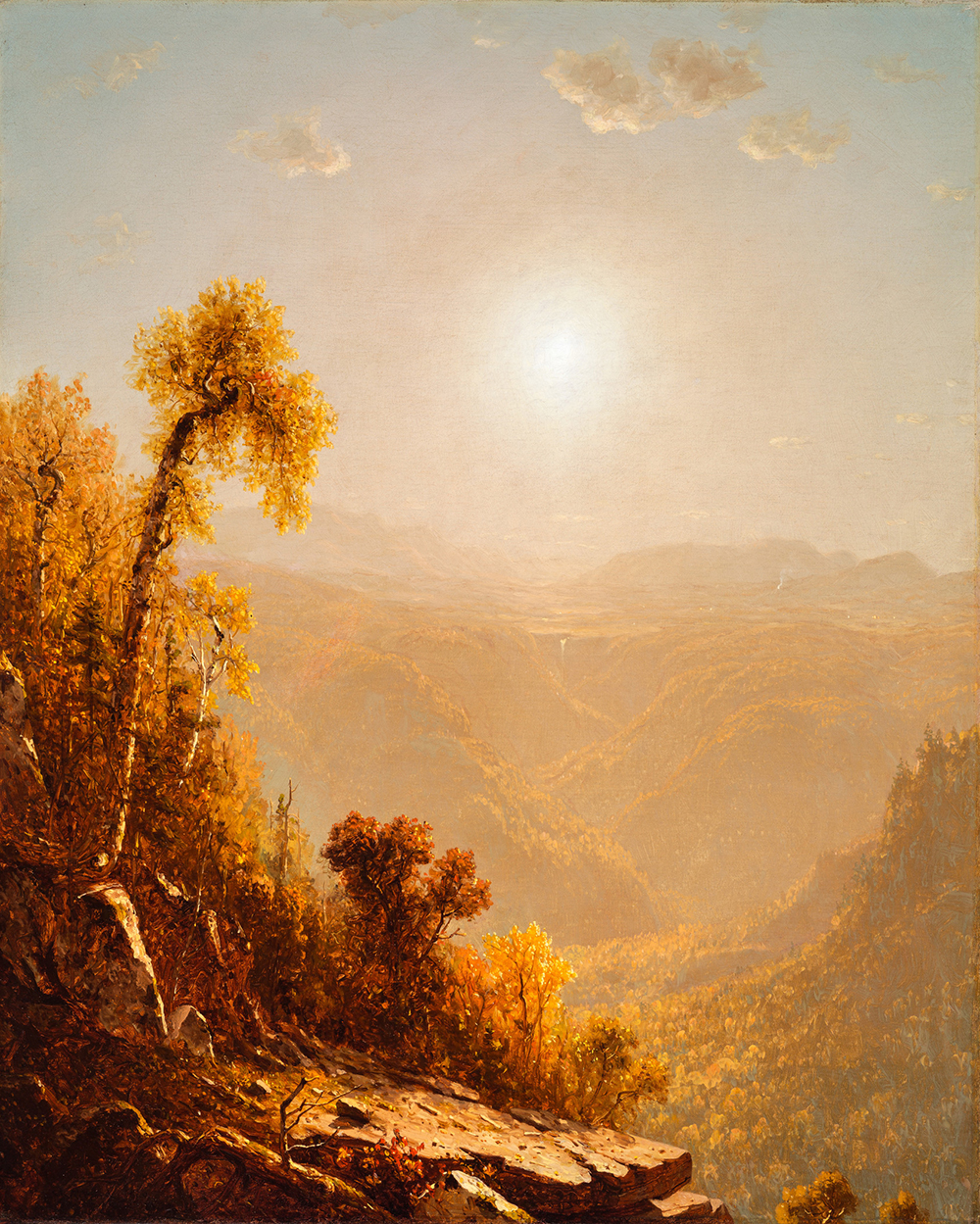 Even more significant may be the ability to scrutinize who met and mingled there; in the case of the recently auctioned guestbook, it was the artists who drew the most attention. Thomas Cole, John William Casilear, Frederic Edwin Church, and James David Smillie all appear within its pages. These men and their colleagues and pupils painted, sketched, and engraved the neoclassical resort and its surrounding beatific wilderness to such an extent that it became, according to James Fenimore Cooper, the most famous view in America, a trendy destination on par with Niagara Falls.

The Catskill Mountain House became the breeding ground for the Hudson River School, a style of plein air painting that is largely accepted as the first American school of art and included Cole, Casilear, and Church. The GCHS’ Palmer called the Mountain House “the keystone” of the burgeoning artistic movement. “It was part of this fundamental structure that allowed the Hudson River School landscape art to become what it is and what it represents today to the American psyche,” he said.

The Hudson River School’s founder was Cole, a British émigré who made one of the earliest paintings of the Mountain House in 1828 (later copied by his sister, Sarah). He followed up with many others, including the circa 1844 paintings Catskill Mountain House: The Four Elements and A View of the Two Lakes and Mountain House, Catskill Mountains, Morning, and had previously made a splash with his Falls of the Kaaterskill, an 1826 rendering of one of the tallest waterfalls in New York, just a short hike from the Mountain House. “There can be no doubt that the Catskills liberated Cole’s romantic sensibility, gave him a theme and message, and permitted him to satisfy some deep desire for glorifying the American landscape,” wrote Van Zandt.

As a “local,” Cole invited other artists to join him upstate, staying at the expensive hotel or opting for cheaper accommodations in the neighboring hamlet of Palenville, site of America’s first art colony and storied home of Rip Van Winkle—whose creator, Washington Irving, hadn’t even visited the county before setting his famous tale there but did stop over at the Catskill Mountain House in 1832. Setting out from the Mountain House property, artists followed a path to Artist’s Rock, a dramatic outlook, and from there to a second promontory, Prospect Rock, and then to a spot affording the magnificent vista of North and South Lakes, the Mountain House, and the distant ridges of Connecticut and Massachusetts. Cole painted what he observed as he rambled along these trails, as did Jasper Francis Cropsey, Sanford Robinson Gifford, and DeWitt Clinton Boutelle. Even Winslow Homer couldn’t resist; his wood engraving Under the Falls, Catskill Mountains appeared in Harper’s Weekly in 1872. 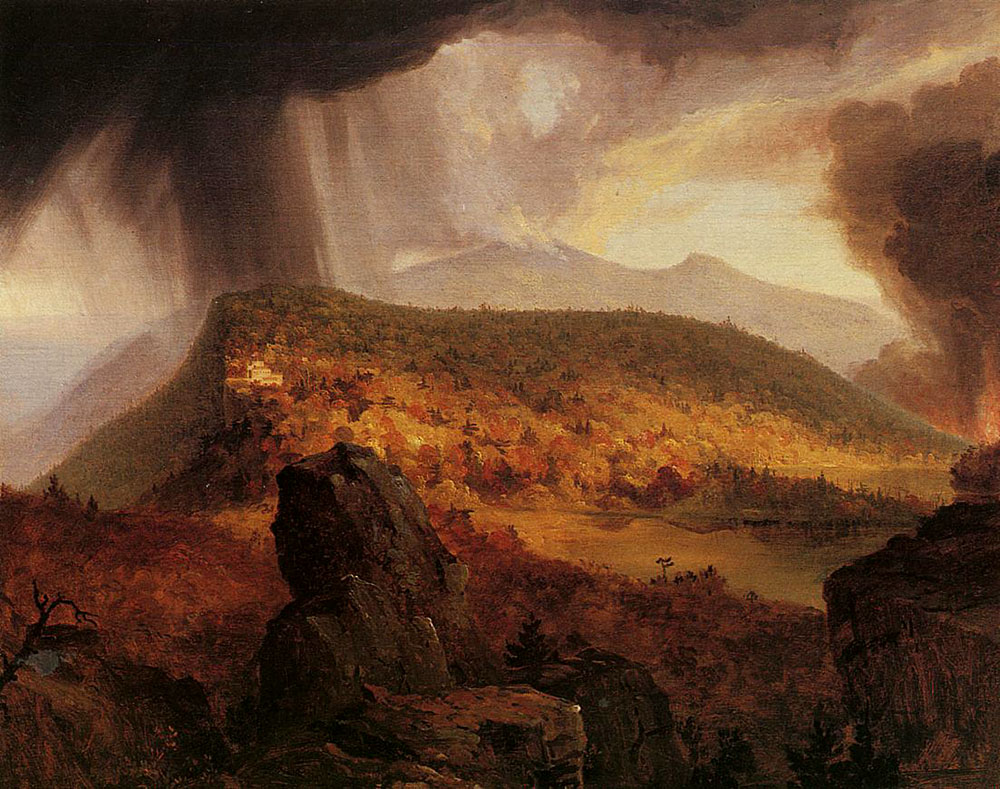 Of those listed in the newfound ledger, Casilear painted Above the Falls, Catskill in 1862, and Smillie, an engraver, produced Catskill Mountain House after a George Harvey drawing around 1845. Cole’s protégé Frederic Edwin Church lodged with him from 1844 to 1846, producing, among other works, Kaaterskill Falls in Winter, in pencil and chalk on paper. On the night of September 6, 1847, he checked into the Mountain House, perhaps to participate in one of the resort’s beloved pastimes, watching the sunrise, before putting the final touches on his painting Morning, Looking East Over the Hudson Valley from the Catskill Mountains. Church fell so hard for the region that, like Cole, he made it his home, though he chose to build his museum-like mansion, Olana, in Hudson, New York, just across the river from the studio of his former instructor.

One of the Hudson River School’s best-known works may be Asher Brown Durand’s Kindred Spirits, an 1849 oil on canvas that depicts Cole and William Cullen Bryant standing atop an outcropping and surveying the wooded wonderland of Kaaterskill Clove. The New York Public Library raised some ire when it sold the painting for $35 million in 2005, letting it leave New York for a new home at the Crystal Bridges Museum of American Art in Arkansas, founded that same year by Walmart heiress Alice Walton.

Which brings us, in a very roundabout way, back to the Catskill Mountain House register at auction. The bidding started well above the initial $5,000 estimate and finally hit its ceiling at $36,000 plus $11,000 in fees, way too steep for the GCHS. Before the sale, Palmer had stressed that if they couldn’t win it, he hoped that another institution would secure it, accessibility for scholars being his top priority. “The commoditization of history is the worst thing that has ever happened to the field because it puts a paywall between people and their heritage. The past should not be pay to play,” he said. The reality that it might slip away, “never to be seen again, is just the antithesis of what history is supposed to be about.”

Swann Galleries records the ledger’s new owner as a private buyer, Rick Sharp of New York. But the news isn’t all bad: Sharp has described himself as a supporter of the arts; a former board chair of the Olana Partnership, the nonprofit organization that supports artist Frederic Edwin Church’s home; and a “frequent lender to museum exhibitions.” Perhaps the GCHS and Olana will be able, one day, to reunite the old registers for an event to celebrate the Mountain House and its reach. (Its bicentennial fast approaches…) 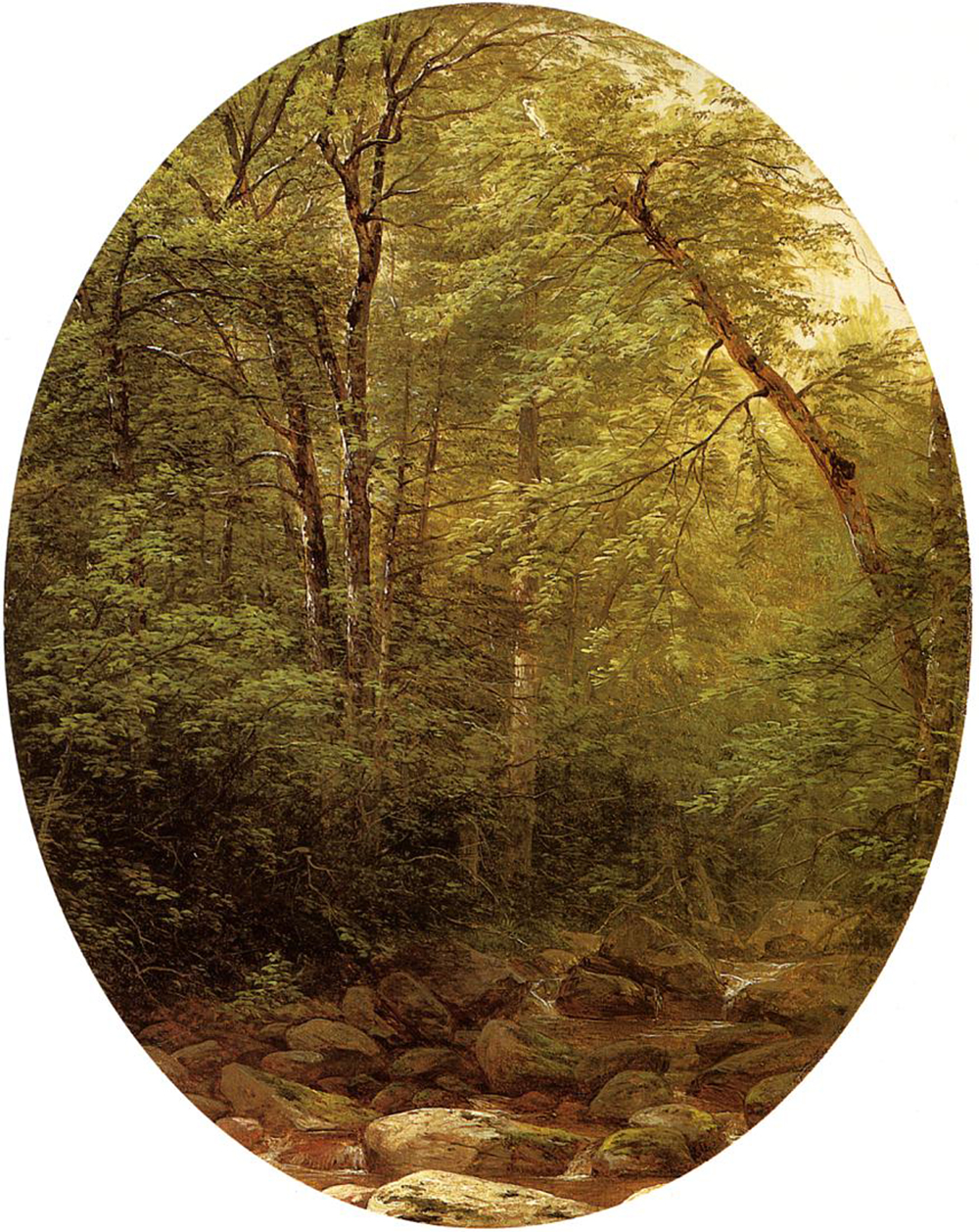 The legacy of the Catskill Mountain House as a place to escape to and enjoy nature lives on. The physical structure changed hands several times in the twentieth century, and valiant efforts were made to preserve it, but the doors closed in 1942 to all but looters, squatters, and woodland creatures. The derelict hotel lingered on the mountaintop for another two decades, luring curiosity seekers; to this day its former site remains a popular spot to hike and picnic, with state-run campgrounds nearby. “What they were billing the Mountain House as back in 1824 when it started is the same thing we’re selling Greene County as still: come to the mountains, experience the trails,” said Palmer. That kind of nature-based tourism is integral here.

Of course, art trails abound as well, leading sightseers to prominent lookouts and artists’ haunts. While some of the views have changed—trees have grown, safer footpaths have been installed—New York State’s preservation of the land has ensured that they are largely unencumbered by development. The double-tiered cascade of Kaaterskill Falls, for example, looks much the same as it did when depicted by Durand almost two hundred years ago. And to sit upon the jutting precipice on which the Mountain House once stood and behold the majestic panorama of rocks, trees, and clouds is to see what Church saw that morning in 1847: his creation remains legible on the landscape—as inspiring as ever.

Rebecca Rego Barry is the author of Rare Books Uncovered: True Stories of Fantastic Finds in Unlikely Places and the editor of Fine Books & Collections magazine. Her writing has also appeared in the Guardian, Literary Hub, Slate, JSTOR Daily, and Paste.