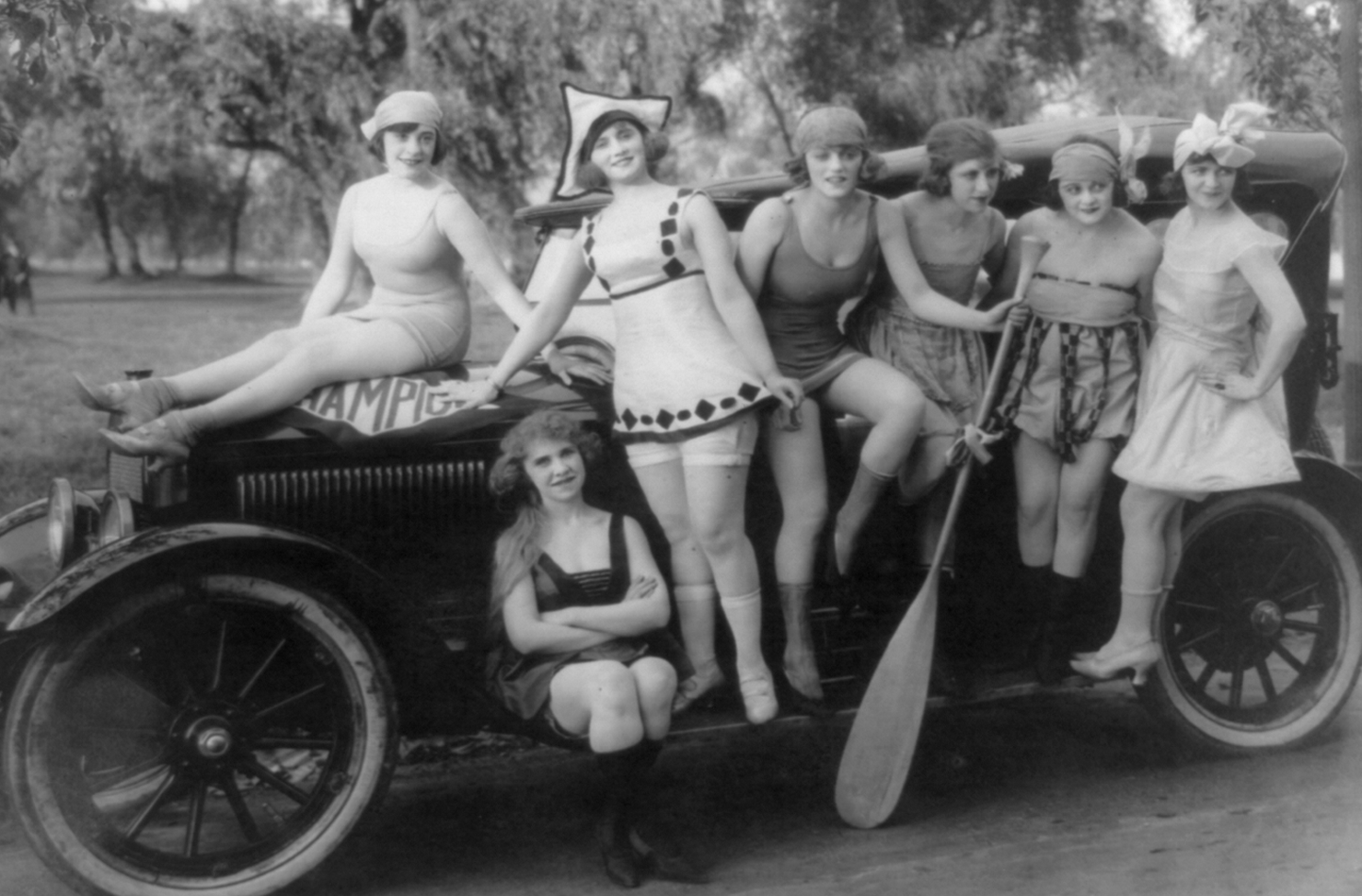 In 1915, Hollywood was saturated with slapstick. If the fledging studios had learned one maxim, it was that physical comedy could more than compensate for silent film’s lack of dialogue. The silent comedians we’ve come to associate with the period—Fatty Arbuckle, Buster Keaton, Charlie Chaplin, Harold Lloyd —would refine this brand of humor into art. But before The General andModern Times, there were the bumbling Keystone Cops, the touchstone of Keystone Studios, and its brilliant, if somewhat single-minded founder, Mack Sennett.

Sennett gave Chaplin, Arbuckle, and Mabel Normand their first breaks, and is arguably one of the founding patrons of comedy. But Sennett was also responsible for the concept of the "Bathing Beauty"—and, by extension, filmic eye-candy as we know it today. For every Megan Fox, you’ve got Mack Sennett to thank and blame.

Sennett first came up with the idea of the Bathing Beauties in 1914, when he was desperate for a way to differentiate his Keystone comedies from the rest of the oversaturated laugh market. He had a raft of press agents, but they were running a losing race in getting special notice in the papers. But one day, while reading the daily newspaper, Sennett had an epiphany: there on the front page was a picture, three columns wide, of a girl who had been involved in a minor car accident. It wasn’t the story that won the picture its place on the front page—it was the girl who, in addition to being pretty, was also showing off her fetching...knees.

The way to get Keystone pictures extra notice, Sennet thought, was a healthy dose of knee nudity. The producer put his underlinings to work scouting the area for pretty girls, with particular attention to the look of the bare leg. But these girls, in the rough, weren’t publicity material. Instead, Sennett posed them next to his star comedians and sent the photos off to the press, knowing that the spectacle of the pretty girls and their pretty knees would give his stars the extra coverage they needed. And just in case the newspapers wanted to get sneaky, he had his photographer shot the images in such a way that sneaky editors couldn’t just cut out the comedian and print the pretty girl.

Suddenly, Keystone had more press than all the other studios combined—or at least that’s how Sennett tells the story. Given their print success, Sennett decided to exploit them onscreen. Most of the girls couldn’t act their way out of a box, but it didn’t matter: all they needed to do was look good and, depending on the scene, run around on the beach and make tiny splashes in the water.

But Sennett wanted eye-catching costumes—better than what had been used for the print ads. His costume department, however, tried to put the girls in “appropriate” bathing suits—“high rubber shoes, black cotton stockings, dark blue bloomers, and voluminous tunics with tatted neckpieces and ballooning sleeves.”

Sennett was not pleased. He wanted something that showed off what a woman actually looked like—nothing prurient, per se, just flattering. What he came up with was risqué, especially for the time (even the comedians voiced their concern), but when the Bathing Beauties made their rounds in Hulu-Hula Land (1917), the mix of outraged letters from moral groups and massive ticket sales told Sennett that he was doing something just right.

Over the next decade, hundreds of aspiring starlets paid their dues as Mack Sennett Bathing Beauties, starting at tweve dollars a week. There were the original three—Evelyn Lynn, Cecile Evans, and Marie Prevost (whom Ernst Lubitsch would later call “the most brilliant young comedienne he’d ever seen”)—and then hundreds more, including Phyllis Haver (the original ‘Roxy’ in the first screen adaption of Chicago), Virginia Fox (wife-to-be of famed Fox producer Daryl F. Zanuck), and Carole Lombard, whom Sennett called “a scamp and a mad-cap.”

But perhaps the most famous Beauty was Gloria Swanson. In later years, Swanson would never call herself a Mack Sennett Bathing Beauty, just a "Beautiful Girl," employed by Mack Sennett, who periodically appeared in her bathing suit—but the appellation sticks. When Swanson first showed up at the Keystone lot in 1916, Sennett told her that her look was all wrong: her clothes were “terrible” and her makeup, done to make her look far older than her sixteen years, was “all wrong.” Sennett, however, saw something in her eyes—she had a marvelous way of cutting people down with them—and gave her a contract on the spot. She started at $65 a week; two years later, she was making $20,000 a week at Paramount, already one of the biggest stars of the silent era.

And so the “Bathing Beauty” grew ubiquitous. Other studios aped the concept (Fox’s Sunshine Girls, Christie Studio’s Bathing Beauties), while beachside communities staged their own Bathing Beauty contests. Various Sennett Beauties toured the country, putting on “revues” almost wholly composed of Beauties Walking Around While Bathing-Suited, with a little “shimmy dance” to spice it up. The police shut down one Atlanta revue for obscenity, prompting a heated response from the Beauties:

We all come from good families in California and we’ve got fathers and brothers who’d never let us do anything improper. Why, my dad is a prominent doctor, and so is hers, and hers is a lawyer. We don’t do a thing except just let the folks see us in the bathing suits we really swim in out home. They’re glad enough to look at us that way in the pictures, why wouldn’t they like it in real life?

The implicit argument: if your dad and brother think it’s okay, if you do it all the time, and if your parents are high-class, then clearly it can’t be obscene.

In the fan magazines, there was tongue-in-cheek quasi-lechery; one Film Fun gossip columnist, commenting on the Bathing Beauty craze, claimed he’d “rather be the Pacific Ocean than President!”

As the 1920s drew to a close, the allure of the Bathing Beauty began to fade. Or, more precisely, as the masses slowly began to adopt the Beauties’ mode of dress, both on the beach and off, they became less of a novelty. From the start, the Bathing Beauties had wrapped their breasts “like mummies,” and while their bathing costumes may have shown off their knees, they all had dropped waists. Their costumes may have been for bathing, but they were clear antecedents to the flapper fashions that would soon blaze across the Western World.

Sennett is broadly, and mistakenly, credited with “inventing” nudity. He may not have been responsible for the idea of bared skin, but he was responsible for the filmic pairing of the relatively nude body with fun: it’s visible in Mabel Normand’s diving board antics in The Water Nymph back in 1912, in the Beauties’ manic circling of Harry Langdon in His New Mamma, and countless other Sennett shorts.

Without stockings or heavy dresses, these girls could finally move. This same kinesthetic joy is on full display in the flapper films of a decade later, infectiously manifest in the fidgety bounce of Clara Bow and the effortless Charleston of Joan Crawford.

Sennett once referred to the Bathing Beauties as “the wonderful girls who made our funny pictures beautiful,” but it was more than that—he chose them not for their perfect faces or measurements, but for that ineffable something that some call “It” and others call “charisma.” It was in the electricity of their eyes (Swanson) and the coy rascalry of their smiles (Lombard); it was in the way they made the bared kneecap, clavicle, and shoulder blade into something sensuous.

Sennett never actually wanted nudity: it was the hint of skin that did people in, he thought, not the full reveal. It might also have been the palpable ebullience with which these women inhabited their newfound freedoms: pleasure, after all, is terrifically sexy.

But contemporary nudity, at least in its fetishized form, isn’t fun. Today’s Bathing Beauties don’t look blissful or at home in their bodies—many have the hungry-eyed look of the highly-regimented body; others seem perpetually open-mouthed, the simulacrum of the sexual submissive. Otherwise beautiful flesh and faces become banal, forgettable, and, in movies like Spring Breakers, the very inverse of titillating. It’s deeply ironic, then, that the very specific ideas of what the nude female form should look like prove just as constrictive as the woolen, weighty costumes Sennett’s Bathing Beauties worked so diligently to leave behind.

Anne Helen Petersen is a staff writer at BuzzFeed. Her first book, Scandals of Classic Hollywood, was published by Plume/Penguin in September 2014.