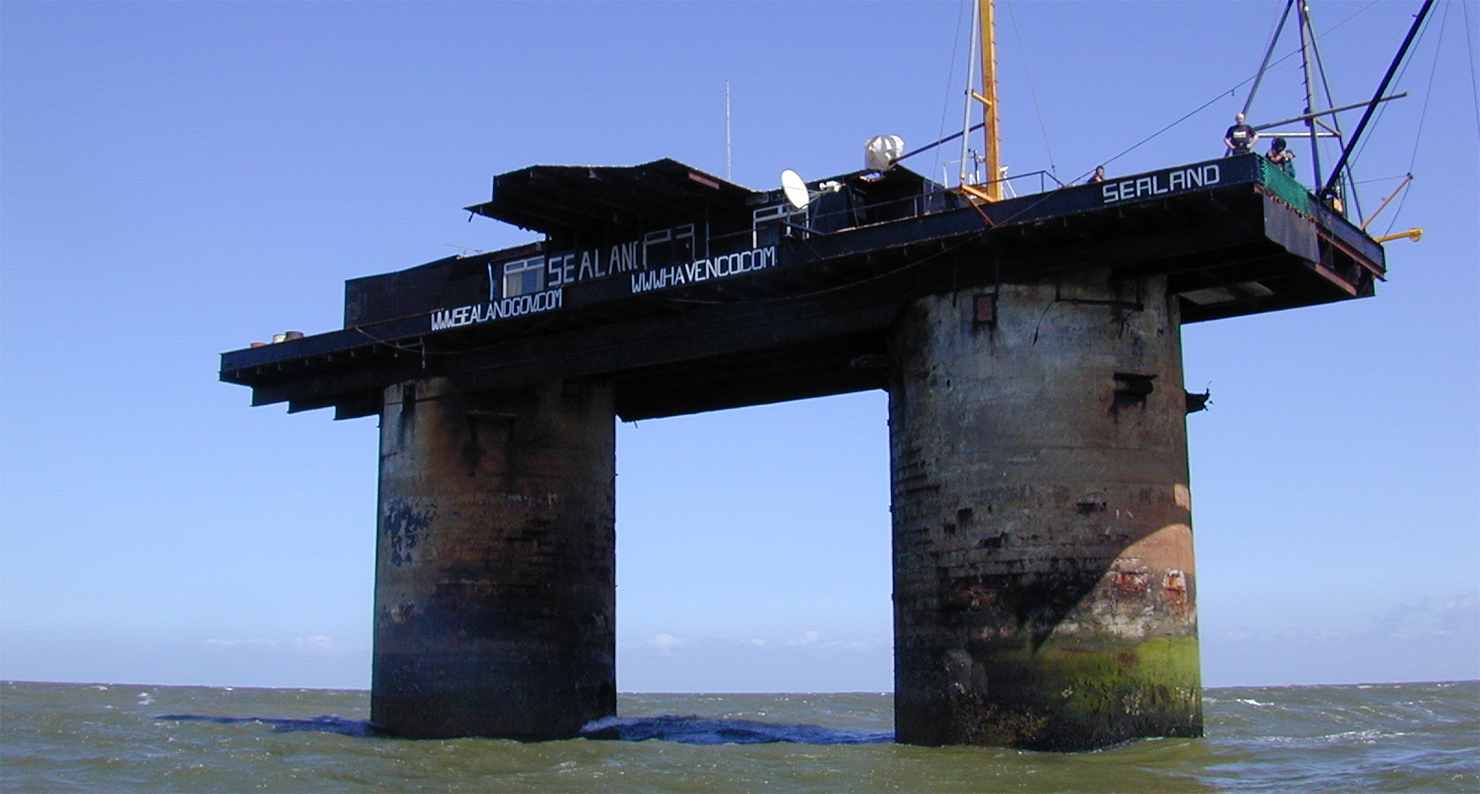 Principality of Sealand, 2007. Photograph courtesy Ryan Lackey. Sealand is an unrecognised self-declared state (or micronation) located on a British-built marine platform in the North Sea.

In 1966, two British pirate radio operators were in need of a new outpost, a place from which they could broadcast banned American rock and roll music outside the reach of British communications authorities, when they came to a realization: the abandoned WWII military sea fort that lay in the choppy waters of the North Sea, just beyond England’s maritime borders, would suit their needs perfectly. By Christmas Eve, Roy Bates, along with his family, was the occupant of Roughs Tower, the largest part of the sea fort. But establishing a home in international waters, untethered by domestic law, leads the eccentric mind to larger possibilities.

A year later, Bates christened his new fortress home “The Principality of Sealand.” There was nothing luxurious about the royal territory, which consisted of two cement pylons supporting a 6,000 square foot platform, topped with a landing pad, four floors of Spartan living quarters, and an armory. Once settled, Bates set about creating all the accoutrements required of a monarchy: a constitution, stamps, a passport, a flag, an anthem and a national motto: E Mare Libertas, “From the sea, freedom.”

The sea has long provided refuge for the wandering libertarian. The world’s oceans are littered with micronations: self-declared states of various tiny sizes. Some have dubious intentions—to live outside the rule of law, avoid taxes, or simply indulge oligarchic ambition. Whether it’s for the free market or for free love, the underlying principle of the micro-nation is freedom, and the sea has always been a generous provider. In 1949, while attending the International Tuna Cup Match, Russell M. Arundel, chairman of a Long Island Pepsi-Cola bottling company, bought a rocky island eighteen miles off the coast of Nova Scotia for $750. He declared it Outer Baldonia and himself the Prince of Princes. For years Arundel and his court of fisherman friends staged their own mock fishing competition with prizes going to ugliest catch. No one ever lived on the island, and it was eventually sold to the Nova Scotia Bird Society.

The 1960’s and 70’s brought a slew of self-proclaimed island micronations—each with their own libertarian, utopian or commercial agenda—The Republic of Rose Island, New Atlantis, The Conch Republic, the Republic of Minerva. Most micronations remain unrecognized by the international community and eventually dissolve for one reason or another. Sealand, though, lives on.

The United Nations Convention of the Law of the Sea Treaty allows for any so-called “state” to construct an artificial island if it is beyond the national jurisdiction of the nearest nation. Located six miles off the English coast, Sealand was untouchable by the British government—a fact that Roy Bates lauded over them. After an initial attempt by the government to demolish the fort, Sealand faced its first real challenge to sovereignty. Two years after Sealand’s founding, Prince Roy and his teenaged son, Prince Michael, found themselves in British court facing two firearms charges. Michael had fired shots from Roughs Tower towards a nearby Royal Navy boat. The court ruled, however, that it was not within its jurisdiction to decide the matter. Bates, who had armed and trained his children to protect their homeland, claimed that they had only been warning shots. “I can tell them to murder someone if I want to,” Bates said. “I am the person responsible for the law in Sealand.”

Tourism is the backbone of many an island nation’s economy. And so, Roy Bates’ first serious venture into establishing an tourist industry for Sealand came in 1978, when German businessman Alexander Achenbach, along with some Dutch associates, became interested in turning Sealand into a luxury hotel-casino. Bates not only issued Achenbach citizenship—a distinction he shared with only a few hundred others—but also a Prime Ministership for life.

In turn, Achenbach and some of his crew attempted a coup. While Bates and his wife were ashore on business, Sealand was invaded and Michael Bates was taken hostage. The takeover was short-lived. Michael was released, and soon he and his father, arrived in a helicopter at dawn, retook the principality, and captured Achenbach’s lawyer, charging him with treason. The British government refused to get involved and the Germans sent an ambassador to deal with the situation, but to no avail. Bates considered the move a recognition of Sealand’s sovereignty, but refused to give up the hostage. After two months of forcing Achenbach to “wash the loos and make coffee,” the Bates tired of their prisoner and gave him up.

The budding nation settled into maturity. The fort was eventually furnished and modernized with double-glazed windows, and an electric generator replaced a coal one. Retired British soldiers were brought in to protect the tiny nation from any future invasions.

In 1987, the freedom that the sea had provided Sealand was in trouble. Bates, returning to his first love of pirate media, was about to launch Sealand TV, airing entertainment shows from 5PM-2PM daily: movies, music videos, request shows and sports. But that October, England enacted a UN treaty that extended its territorial waters from three to twelve nautical miles. Undeterred, Sealand claimed extension of its own territorial waters. Paying little notice to the tiny nation’s demands, the British didn’t seem to mind that this meant that Sealand now claimed part of Suffolk. Sealand TV never did air, but the tiny principality carried on unopposed.

In 1997, fashion designer Gianni Versace was murdered at his home in Miami. His killer, Andrew Cunanan, committed suicide on a houseboat shortly thereafter. The owner of the boat was a German businessman who held a Sealand passport and diplomatic license plates. Suddenly, Sealand passports were everywhere. Four-thousand passports were sold in Hong Kong alone, where foreign documents were in high demand during the months before the colony was returned to China. A website boasted Sealand’s population as 160,000 strong, with several embassies around the world. The only problem was that Sealand did not have a website and had stopped issuing passports in 1977 due to fraud. This was a case of national identity theft. Everyone wanted a piece of Sealand’s freedom, including a flamenco nightclub owner who was arrested in Spain after selling diluted gasoline, who claimed to be Sealand’s consul.

Spanish police raided three offices where Sealand passports and license plates were produced and followed the trail to Moroccan hashish smugglers, Russian arms dealers, and a scheme involving the transfer of millions of dollars to mysterious Russian and Iraqi clients. The Bates family was not suspected of any involvement. The source was eventually discovered to be a group of German businessmen who had set up the Sealand website in 1998, through which they sold Sealand passports, licenses and diplomatic documents. The Spanish investigators claimed it was part of a retribution scheme for the failed German coup of 1978, while the Germans brushed the whole thing off as a joke and denied any responsibility for the criminal activities associated with their products.

By 2000, Bates realized his pirate nation would need to be updated with pirate servers. He partnered with Sean Hastings, a Silicon Valley entrepreneur and established Sealand as the headquarters for Hasting’s company, HavenCo, hailed as the world’s first offshore electronic data haven. Sealand hosted the company’s servers away from the prying eyes of governments and free from the burden of taxes. Bates vowed to run a clean company and prove that although Sealand was free to play by its own rules, it would abide by international standards. But the arrangement was short-lived and by 2006 HavenCo had relocated to London. Among other operative issues, Sealand’s very freedom had caused too much suspicion. Nevertheless, Michael Bates remains the CEO of HavenCo.

Roy Bates and his wife eventually abandoned the freedom of the high seas for dry land. Today Sealand’s population consists of one caretaker. Money for the principality’s upkeep is raised from selling titles and paraphernalia: for $15.50 you can get a Sealand mug, and for $310 you can become a Count or Countess.

For most micronations, once the heady era of idealism subsides, the goal becomes sheer survival. Sealand may have started as an eccentric vanity project in nation-building, but the tenacity of its royal family, along with the very the freedom offered by the chilly North Sea, has secured Sealand’s future. Roy Bates died in 2012, and was succeeded by Prince Michael, who mostly reigns over his sea kingdom from Essex.

Adee Braun is a writer living in New York City. Her work has appeared on Flavorwire, Untapped Cities, and Jewcy.