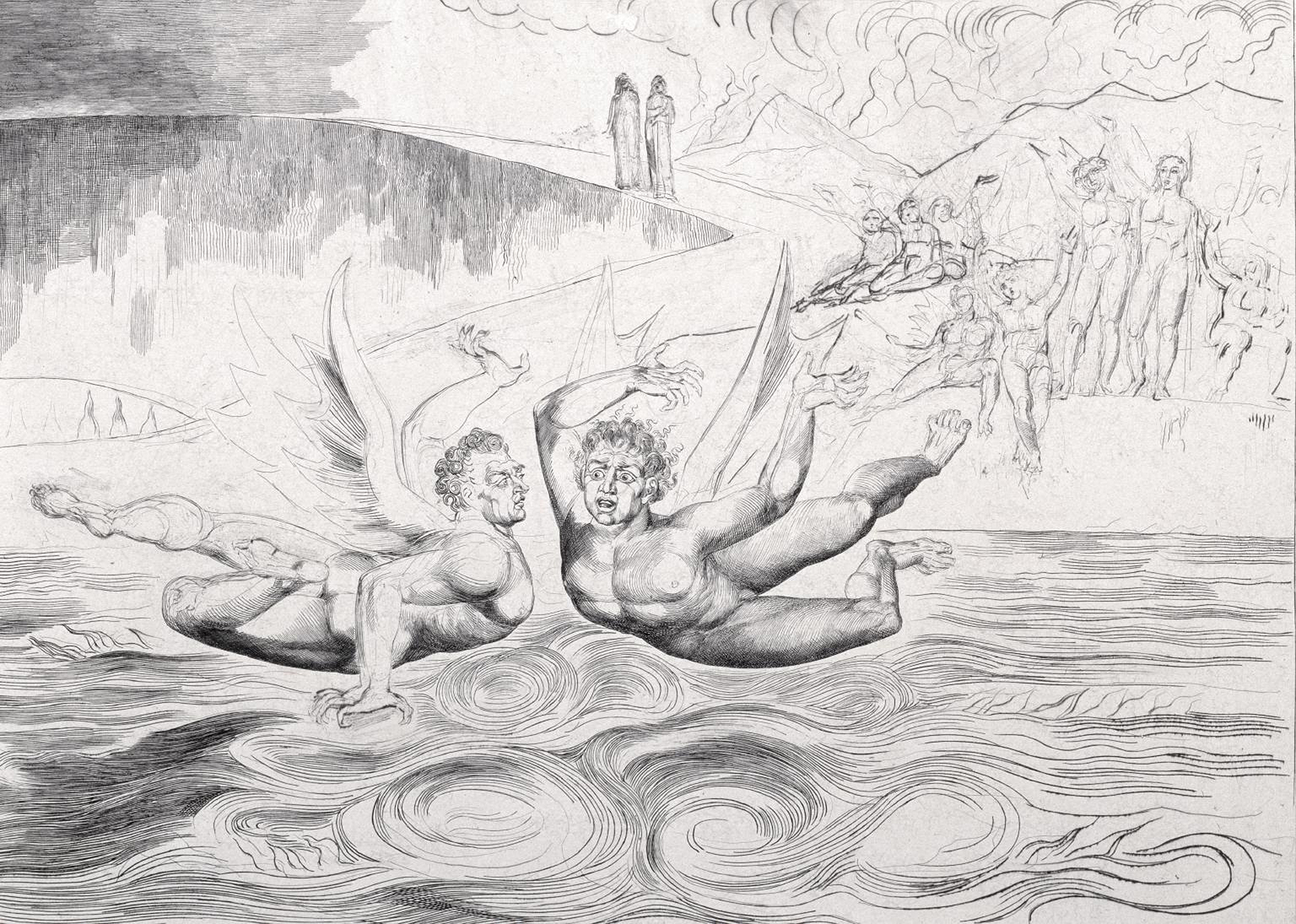 acrimony: A sharp or irritating bitterness of tone or manner. From Latin ācrimōnia, caustic or irritant quality, pungency, corrosive quality, acidity (of the stomach), indigestion, harshness (of feeling).

aggravate: To rouse to displeasure by persistent and petty goading. From Latin aggravāre, to weigh down, burden.

ally: A person who helps or cooperates with another, a supporter. From Latin alligāre, to bind, tie. Also, alligator: (obs.) a person who ties or binds something.

beef: A protest, basis for complaint, grievance. “To round himself up with his ever-loving wife in case of a beef from her over keeping the baby out in the night air.”—Damon Runyon, 1930

brabble: To quarrel about trifles, esp. to quarrel noisily, to brawl, squabble. Usually identified with Dutch brabbelen, to confuse, stammer, jabber, but this is doubtful. Possible corruption of Latin parabolare, to harangue, discourse.

camaraderie: Loyalty to, or partiality for, one’s comrade, i.e., one who shares the same room. From Spanish camarada, chamberful, chamber mate.

cavil: (n.) The raising of frivolous objections. From Latin cavillāri, Italian cavillare, to practice jeering or mocking, to satirize, jest, reason captiously, and cavilla, a jeering and scoffing raillery.

contretemps: A disagreement or argument, a dispute. From French contre-temps, -tems, bad or false time, motion out of time.

dis: To treat with disrespect or contempt. First known use, 1980.

dispute: (v.) To contend with opposing arguments, to debate in vehement manner or with altercation.

donnybrook: A public quarrel. From Donnybrook Fair, held annually near Dublin, legendary for brawls and free-for-alls. The fair was abolished in 1855.

dukes: Hands or fists, as in “Put up your dukes!” Possibly from Duke of York, rhyming slang for fork, hands, fingers.

elbow: (v.) To thrust aside with an elbow. “No man lives without jostling and being jostled; in all ways he has to elbow himself through the world, giving and receiving offense.”—Thomas Carlyle, 1838

enemy: “A designing scoundrel who has done you some service which it is inconvenient to repay.”—Ambrose Bierce, Devil’s Dictionary

enmity: Active hatred or ill will. “Ye adulterers and adulteresses, know ye not that the friendship of the world is enmity with God?”—Epistle of James 4:4

faction: An organized dissenting group within a larger group; people united in maintaining a cause, policy, or opinion in opposition to others. “The public tranquility was disturbed by a discontented faction.”—Edward Gibbon, 1781

faida: Italian for a continuing conflict between families.

foehood: A state of mutual hostility.

grievance: The infliction of wrong or hardship on a person; suffering, distress. From Middle English grevaunce, Latin gravare, to burden, gravis, heavy, grave; akin to barys, heavy, and Sanskrit guru.

grudge: To be unwilling to give or admit. From Old French groucier, groucher, grocier, to murmur, grumble (whence Medieval Latin groussare); of unknown origin.

hate preacher: A spiritual leader who advocates hostility against a particular group or faith (1916).

hete: (Obs.) A feeling of intense dislike or aversion toward a person or thing; hatred, loathing, animosity.

hostile ice: An ice canopy that does not permit a submarine to surface.

kayfabe: The convention in professional wrestling that performances are to be genuine and not staged; a code to protect secrets of the trade. Possibly from pig latin for be fake.

loser on salary: A manager or assistant manager.

luchador: A wrestler who competes in lucha libre, Spanish for freestyle wrestling. Founded in Mexico City in 1933, the Empresa Mexicana de Lucha Libre has become the dominant wrestling promoter in Latin America. The greatest luchador of all time, El Santo, “el Enmascarado de Plata,” made his debut in 1942 in the Arena México. 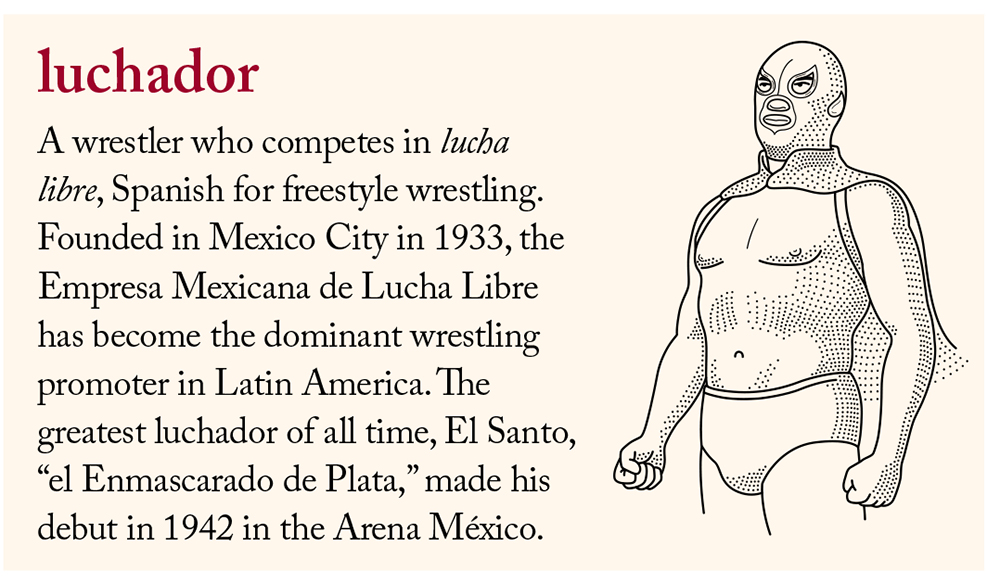 malice: The desire to hurt another person; active ill will or hatred with mischievous intent. Implies a deep-seated and inexplicable desire to see another suffer.

morning hate: During World War I, an aerial bombardment by German artillery.

quarrel: A dispute or argument, violent contention or altercation, a disruption of friendly relations. “He’ll be as full of quarrel and offense / As my young mistress’ dog.”—William Shakespeare, Othello

Rachephantasie: German for a revenge fantasy. “The instinct of revenge, which is so powerful in the natural man and is disguised rather than repressed by civilization, is nothing whatever but the excitation of a reflex that has not been released.”—Josef Breuer, 1895

resent: To feel unpleasant effects of an external influence, to have or acquire the smell of (13th cent.).

rival: A person or thing competing with another for the same objective. From Latin rīvālis, a person living on the opposite bank of a stream.

running dog: A servile follower, a lackey. After Mandarin zougou, a hunting dog.

team: A group of people associated in a particular action or endeavor. Cognate with Old Frisian tām, bridle, offspring, progeny.

victor: One who overcomes or vanquishes an adversary. On the floor of the U.S. Senate in 1832, while defending Martin Van Buren, Senator William Marcy set the political tone for the Jacksonian era: “To the victor belong the spoils.” Thence, the “spoils system” of political patronage.

vilipend: To treat contemptuously or slightingly. From Latin vīlis, vile, worthless, and pendere, to consider.

wergild: Old English for “man payment,” compensation paid by a person committing an offense to an injured party or to the injured party’s family.