ballot: Originally, a small colored ball placed in a container to register a secret vote. Hence, by extension, a ticket, paper, etc., so used. From Italian balota, small ball; originally with ref. to voting balls as used in the Venetian Republic.

blat: блат (Russian) A form of political corruption based on informal agreements or connections; cronyism.

bossism: The predominantly American system in which political parties are controlled by bosses or wire-pullers. First use, 1881. From Dutch baas, master, uncle.

canaille: The common people. From Italian canaglia, pack of dogs.

democrat wagon: A light, open-topped wagon with two or more seats, usually drawn by two horses and typically for use on a farm.

election cake: A cake made in connection with Election Day festivities in Hartford, CT, dating to prerevolutionary times.

electoral stain: A semipermanent ink or dye applied to the forefingers of voters during elections to prevent double voting. First used in India’s 1962 general election.

empleomania: A mania for holding public office. From Spanish emplear, to employ, use. 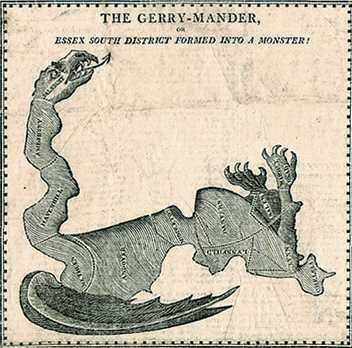 “In 1812, while Elbridge Gerry was governor of Massachusetts, the Democratic legislature, in order to secure an increased representation of their party in the state senate, districted the state in such a way that the shapes of the towns, forming such a district in Essex, brought out a territory of singular outline. This was indicated on a map which Ben Russell, editor of the Centinel, hung in his office. Gilbert Stuart, the painter, observing it, added a head, wings, and claws and exclaimed, ‘That will do for a salamander!’ ‘Gerrymander!’ said Russell, and the word became a proverb.”—Justin Winsor, The Memorial History of Boston (1882)

heeler: A follower who works to further the interests of a politician, esp. one who is obsequious or unscrupulous; a flunky, hanger-on. (Whence ward heeler.) Alludes to folk etymology of the patriarch Jacob; from Hebrew עָקֵב ,יַעֲקֹב, heel. In Genesis 25:26 Jacob is described as clutching the heel of his twin brother Esau when leaving the womb of their mother, Rebecca. In Genesis 27:36 Esau associates his brother’s name with the connotations “to assail a person deceitfully, to overreach, to supplant.”

hoi polloi: The majority, the masses. From Greek οἱ πολλοί, the many. In English use normally preceded by the definite article even though hoi means “the.” “If by the people you understand the multitude, the hoi polloi, ’tis no matter what they think; they are sometimes in the right, sometimes in the wrong: their judgment is a mere lottery.”—John Dryden, An Essay of Dramatic Poesy, 1668

Hubbellism: The practice of political assessment, which reached its climax in the U.S. congressional elections of 1882: all federal employees were assessed 2 percent of their annual salary to the political committee. From Jay A. Hubbell, chairman of the Republican Congressional Committee.

lame duck: An officeholder whose power is diminished because his or her term in office will soon come to an end. Originally, a British term for a bankrupt businessman.

landslide: “A resounding victory; one in which the opposition is buried.”—William Safire, Safire’s Political Dictionary, 1968

nepotism: The showing of special favor or unfair advantage to a relative in conferring a position, job, privilege, etc. From Latin nepōt-, nepōs, nephew.

oligarch: A person who is part of a small group holding power in a state. Whence the iron law of oligarchy, a tendency for large organizations to be run by a small number of people (first attested use, 1915).

plebiscite: A direct vote of all the members of an electorate to decide a question of public importance. From Latin plebiscitum, a law enacted by the plebeians’ assembly.

plump: To support the election of a candidate. Originally, to vote in a bloc. “I am told that the delegates from that colony will vote plump.”—John Adams, 1776

poll: The number of people assembled on a particular occasion, as determined by the counting of heads; the part of the head on which hair grows. From Middle Dutch pol, top, summit. “His beard was as white as snow, / All flaxen was his poll.”—Hamlet, c. 1600

poll watcher: A person assigned to observe activities at a polling place to guard against violations of laws regulating voting. First use, 1893.

popular: Supporting the cause of the common people rather than that of the nobility. “The first acts of an usurper are always popular.”—Oliver Goldsmith, The History of England, 1771

rabble: A disorderly, disorganized, or unruly crowd; a boisterous throng of people; a mob.

riffraff: People of low social class or position. From Old French rifraf, altogether, one and all. 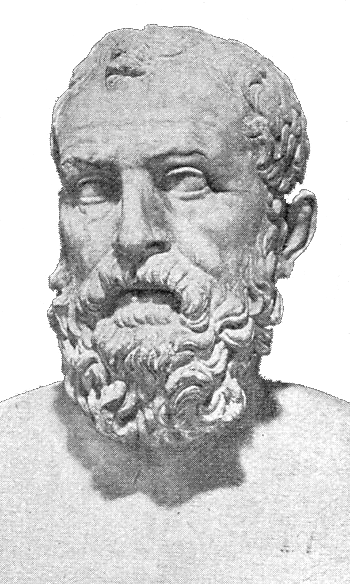 A sage, a wiseacre. Also, in the U.S. in weakened sense, a legislator, congressman. From Greek Σόλων, the early Athenian legislator (c. 630 bc–c. 560 bc) and one of the seven sages of Greece. “Thus the solons, in Washington.”—Ezra Pound, 1948

vote bank: In India, a group of people who can be relied upon to vote together in support of the same party.

vote: An aspiration, ardent wish, or desire; an indication, by approved method, of one’s opinion or preference. From Latin votum, past participle of vovere, to vow, desire.

Votometer: The brand name of a voting machine invented by Arthur T. Bardwell of Springfield, MA, and marketed throughout the U.S. “In twenty years,” the company claimed in 1900, “it will be in universal use in the United States.”

vulgar: Of an ordinary unartificial type; not refined or advanced; having a common and offensively mean character; coarsely commonplace; lacking in refinement or taste; uncultured, ill-bred. “That word means the mind of the herd, and specifically the herd in the city, the gutter, and the tavern.”—Guy Davenport, 1987