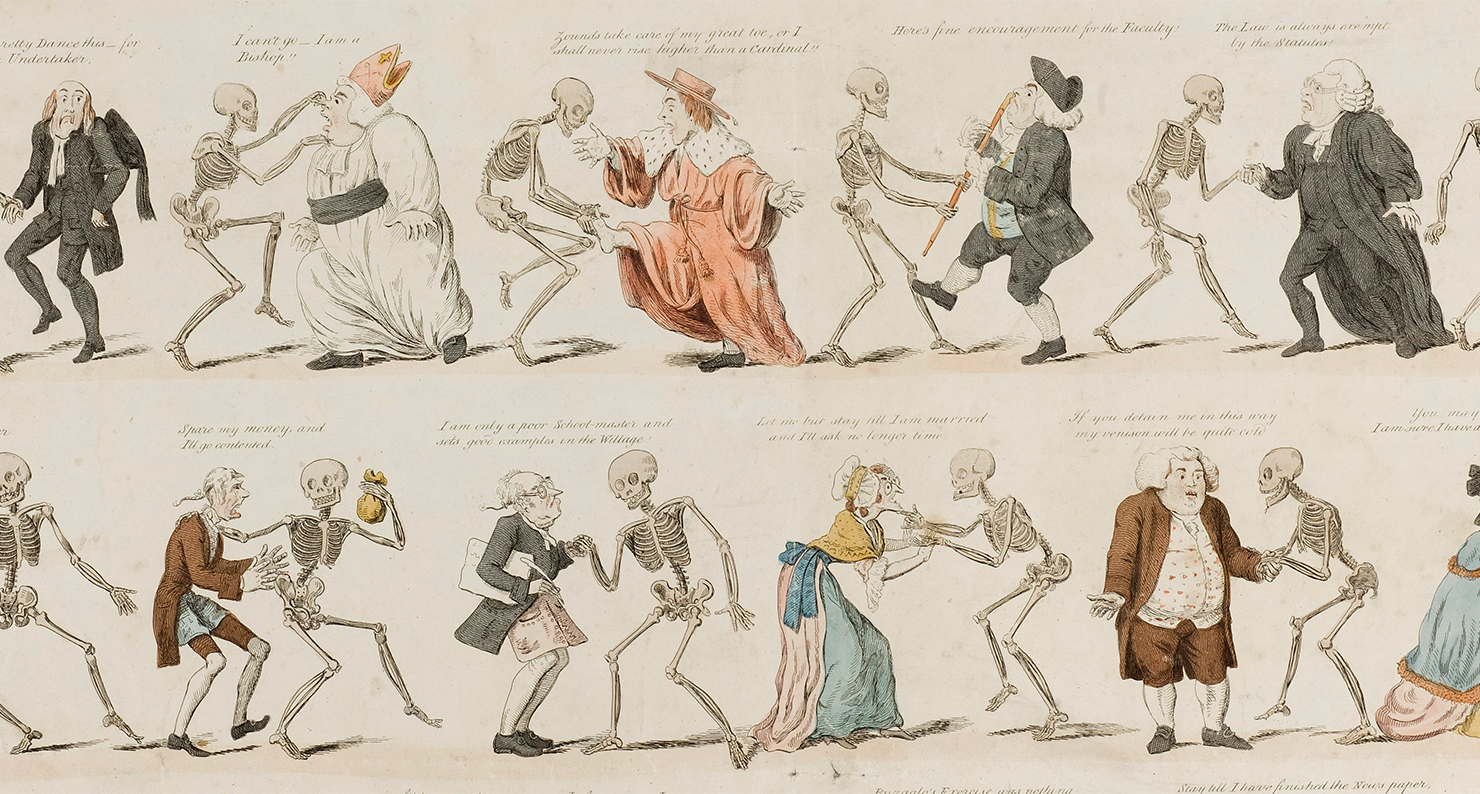 There was never anything funny about the human pelvis bone. At least not until one afternoon in seventh grade when my science teacher seized one from a lab table, propped it behind his head so the hip bones protruded from either side of his gray buzz cut and, leaping atop a stool, declared in a deranged falsetto that he was Mickey Mouse. Without breaking character, he lifted a lab skeleton from a corner, set it clattering beside him and through some deft handiwork, caused its mouth to move: “So begins our segment on the skeletal system.”

The sudden display of osseous operatics shook the class from our lunch-induced stupor. We roared with laughter. The lab skeleton and its assorted detachable parts presided as master of revels for the rest of the lesson, lending a sophomoric quality to science that otherwise would have been given over to rote learning. I haven’t yet forgotten that the human body contains 270 bones at birth, but I’ve also never stopped wondering: what was so funny about that skeletal husk of a human’s existence? At what point in history had laughter triumphed over our more lachrymose tendencies? When death smiled, why had we smiled back?

Set in an historical context, blithe reaction of my science class to such bony badinage can be seen as something of an anomaly, the result of centuries of concerted effort to dissociate death with the resulting by-product, the skeleton. As a skeleton forms our physical framework in life, so too can it be considered a measure of our mindset toward mortality. Each generation faces death in its own way, and while the skeleton’s hollow-eyed gaze and mocking perma-smile have remained constant across time, humans have pulled a range of faces in response, ranging from the reverent to the ridiculous.

Jokes would have been unthinkable in the anatomical amphitheaters of prior centuries. As City Anatomist of the Amsterdam Guild of Surgeons in the 1630s, Dr. Nicolaes Tulp was permitted one public dissection a year—that of an executed criminal. Observers were expected to appear in solemn dress for the occasion. In Hydriotaphia, a 1658 discourse on burial customs, Thomas Browne wrote that ”to be knav’d out of our graves, to have our skulls made drinking-bowls, and our bones turned into pipes, to delight and sport our enemies, are tragical abominations.” The dead were sacred—not to be disturbed by the probing and prodding of inquisitive minds, much less subjected to cavalier acts of prop comedy. If anyone was to be doing the mocking, it would be death itself, often abetted by its three willing accomplices: the artist, engraver, and publisher.

Hans Holbein’s woodcuts showing the “dance of death” were perhaps the most influential examples of memento mori in art. Created in the 1520s and published in Lyon in 1538 as an emblem book, consisting of a motto, an allegorical picture and a moralizing poem, Holbein’s woodcuts depicted a series of vignettes in which death as a skeleton taunted reluctant popes, peasants, and everyone in between to join in a danse macabre. Death as the ultimate leveler proved a popular depiction and over the course of three centuries the series was widely copied, expanded, and reproduced.

But at some point, death began relinquishing the lead in that terrifying two-step.

If we are to use the danse macabre motif as a measuring stick, the sea change can be traced to the early nineteenth century. In his introduction to the The English Dance of Death, a collection of verse and “metrical illustrations,” William Combe wrote that the dance of death was “a Subject so well known...that little is required to recall it to the Recollection of the Antiquary, the Lover of Arts, and the Artist. The present Object,” he went on to say of the book, “is merely to attract the public attention to the Subject itself.”

Published in 1815, the work was already that of an antiquarian—light cast on a subject that once seemed serious but now made fodder for the satirist’s pen. A gradual improvement in the standard of living meant the ponderous due-deference of what Combe called the “Ages of Superstition” was giving way to mere fascination with the macabre. Combe recognized changing attitudes, cautioning readers:

Thus may death’s image aid delight
Mid the gay scen’ry of the night
But in the Pantomime of years,
’Tis serious all, when Death appears.

Even death personified—illustrated in the book’s frontispiece as a skeleton perched atop a globe, its tambourine and horn strung up in disuse and mouth drawn into a anguished sigh of resignation—appears ready to acknowledge that the memento mori had all but fallen from remembrance. Gathered at the base of the globe are decanters labeled “Drugs,” “Compounds,” “Opium,” and “Arsenic,” medicinal supplements that promised to further hamper death’s once triumphant dance.

The cosmetic applications of arsenic notwithstanding, the practice of medicine had begun to alter the experience of life, death, and dying. Schools of science began acquiring anatomical models and, for the first time, the skeleton was emancipated from its former full-time duty as harbinger of doom. Exchanging the moldering pall for the mantle of pedagogy, skeletons were soon afterward adopted into the scholastic fraternity of pranksters.

Even the most rarified collectors partook in the fun. Prior to his death in 1792, Dr. John Hunter amassed hundreds of human skeletons and other osteological preparations. In his biography of the Scottish surgeon, John Kobler relates an instance in which Hunter gave a lecture that drew a sole attendee, so he excused himself for a moment and returned dragging a skeleton which he seated in a chair. He returned to the lectern and began, “Gentlemen…”

The skeleton trundled west as well. In A Tramp Abroad, Mark Twain unfolds a humorous anecdote in which a young doctor devises a prank to scare Nicodemus (a “simpleton”) to death by placing in his bed a skeleton the doctor had acquired for $50. Later that night, the villagers come creeping to Nicodemus’ window and find him contentedly munching on gingerbread and candy. Writes Twain: “He had sold the skeleton to a traveling quack for three dollars and was enjoying the result!”

And so the once-imposing skeletal specter had reached the mighty Mississippi and promptly been sold down the road for a few gewgaws and a slab of gingerbread. F. Scott Fitzgerald once said there are no second acts in American lives. But did that still hold true when the actor in question was dead on arrival? The skeleton had found a second life as the antithesis of Old World superstitions. In America, even cadavers could crack wise—and did so on everything from bicycles to promotional calendars.

The memento mori could still be found in art at the turn of the twentieth century, but usually only as a momentary counter-blast to the materialistic mores of the day. In All is Vanity, a drawing by C. Allan Gilbert published in Life magazine in 1902, a woman’s reflection appears alternatively as a swirling eye socket; perfume bottles and powder boxes form a row of jagged teeth; her dove-white shoulder blade becomes a bleached cheekbone. The effect is brilliant, but even the Gibson Girl in question seems preoccupied. A twenty-year-old woman in 1902 could reasonably expect to live well into the new century. Anyway, there was fun to be had, and in the burgeoning metropolis of New York, bones were taking part in it.

“Two Nice Boys Take Skeleton For Walk,” announced a New York Times headline on August 21, 1921. The day before, thirteen-year-old Joseph Berry had found a skeleton in the corner of the yard of the College of Pharmacy at 119 West Sixty-eighth Street and decided to give it a night on the town. “Bones Terrify Woman and Cat, Drive Stout Lady Back Onto Bus, Upset Cabaret,” read the story’s subhead. After much mischief, Berry and his skeleton were intercepted by the police:

To get more action the boys brought the skeleton inside [the cabaret] and placed it in a chair by the door. The manager head the screams of the women guests, and after one waiter had refused, he and another waiter carried out the skeleton and chair and threw both to the street. It had just been rescued by the boys from the debris in the roadway and dusted off when Patrolman Edward Schnaible of the West Sixty-eighth Street Station came along and took Berry and the remnants to the station. It was an interesting spectacle for the onlookers as the policeman carried the head and shoulders, while Berry, the juvenile discoverer of the trophy, carried the feet into the station house.

Bonded by a shared delight in frazzling the aged, skeleton and youth form an unlikely alliance. That “nice boy,” Joseph Berry, would have been twenty-one-years-old in 1929 when Walt Disney Productions released “The Skeleton Dance,” the first in their series of Silly Symphonies, as well as “Haunted House,” a more sophisticated short in which skeletons command a timid Mickey Mouse to play an organ while they hoof away in the background. No doubt some would have found the shorts morbid, even with their playful overtones, but more would have taken a delight in hooting at death as the skeletons play each other like xylophones and scramble back into a single grave just before sunrise.

If we must suffer death, we’ve decided that until that time death must suffer us as well. Where reverence and resignation once reigned, we’ve traded severity for slapstick. In Peter G. Marteinson’s The Origins of Laughter, he posits that laughter is the result of a response to an epistemological checkmate that occurs when an “unraveling of the seams” is perceived in the fabric of social reality. Brought face to face with a skeleton, we find ourselves at a similar impasse. Grappling with the notion that nothing endures and all glory is fleeting, we watch as the world unravels before us. In the ensuing emotional rift between the living and the dead, there’s naught but laughter.

In surrounding ourselves with deathly effigies, we have succeeded in mitigating a once menacing presence. Seventh-grade science students waggle a skeleton’s jawbone comically and wonder what’s for lunch. It makes no matter to them that among the many bones that adorn the Sedlec Ossuary in the Czech Republic are thousands from children who died during the famines that followed in the wake of the Hussite Wars in the 1430s. In that span of time, death has become something else entirely—a titillating distraction we prefer to invoke on our own terms in order to see how well its cracked smile reflects our own confidence in life. We may get old and die, but a good joke lives on.

Even barflies and lushes love to have a go.

On January 20, 1967, the New York Times reported a skeleton had been found in a trunk on the sidewalk in front of a bar at 22 Beekman Place, a building slated for demolition. According to police, it was a man’s skeleton, though they were unable to determine who it had been or when he had died. Donat Gautier, the seventy-year-old owner-manager told police the trunk was in the building when he bought the bar in 1913.

“Don’t worry about that,” he said the previous owner had told him. “That’s just a gag.”

Matthew Leib is a writer and cartoonist who lives in New York City.