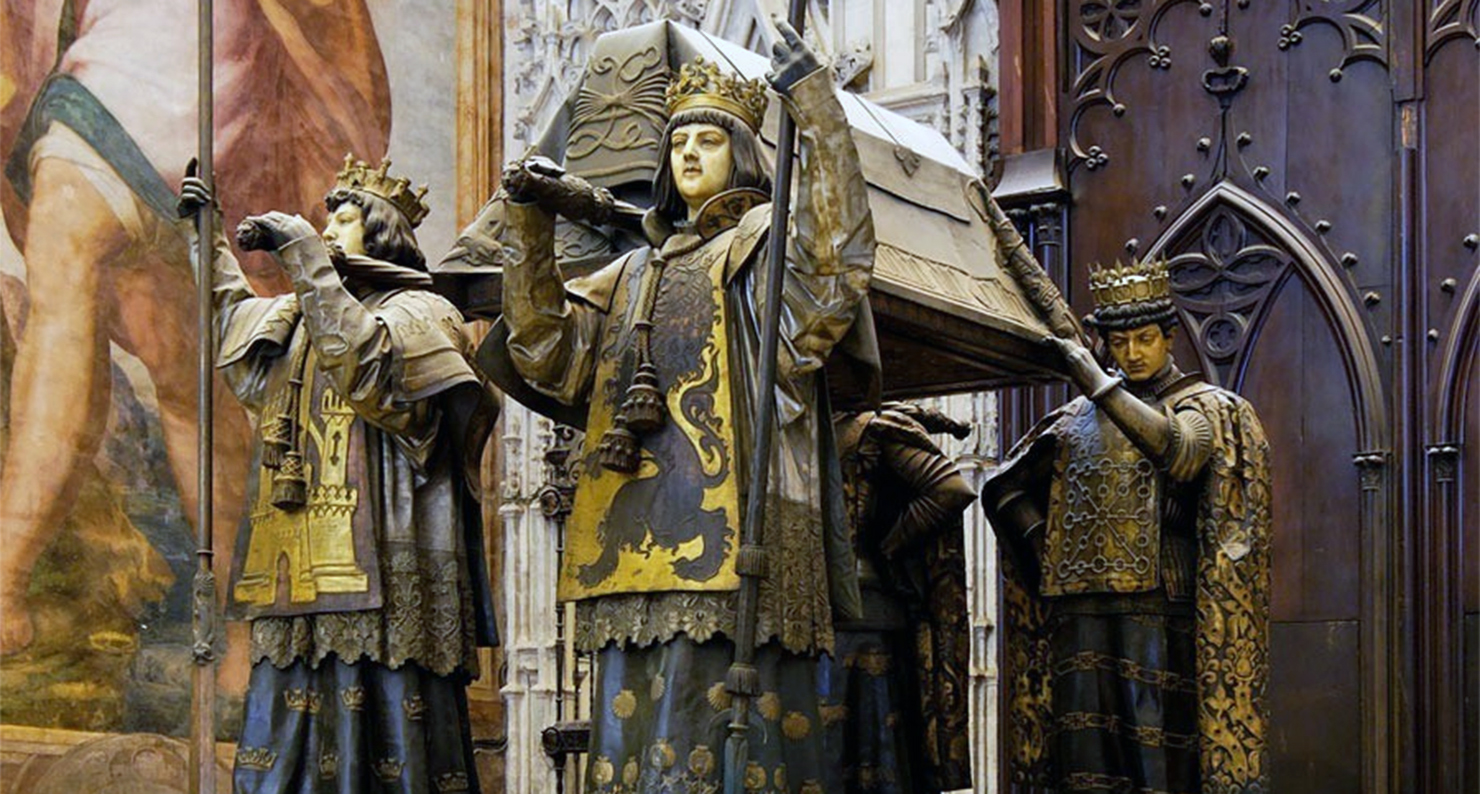 Tomb of Columbus in Seville Cathedral. Via Atlas Obscura.

The legend of Christopher Columbus included serious miscalculations in both life and death. Thanks to some major longitudinal blunders, his attempt to reach the East by sailing West landed him in the middle of the New World, which he refused to admit existed. Even on his deathbed, he denied having encountered a land unknown to Europeans; he believed he’d found the Indies, which is why he called the people he met “Indians.” The story of his afterlife is equally muddled: Christopher Columbus has two tombs, one in the Old World and one in the New, and no one’s sure which has the real Columbus inside.

History’s most famous explorer died, weakened by gout and arthritis, in the Castilian city of Valladolid in 1506. His body spent several years in two monasteries, first in Valladolid and then in Seville. At the time, the corpses of the wealthy were often buried in stages, first in a temporary location while a suitable tomb was constructed. But Columbus’ dream had always been to be buried in the lands he found, and around 1540, his daughter-in-law Maria finally moved his remains to the cathedral in Santa Domingo, the first permanent European settlement in the New World. Over time, many of Columbus’ relatives were buried alongside him.

In the centuries after Columbus’ burial, Santo Domingo was plagued by disasters: pirates, earthquakes, hordes of insects, poverty, political instability. By the time the French historian Moreau de St. Mery went looking for Columbus’ tomb in the 1780s, he could find no definite sign of it. “What a subject of reflection for the philosopher!” he wrote.

Scarcely are three hundred years past since the discovery of the New World, and already we hardly know what are become of the precious remains of the sagacious, enterprising, and intrepid discoverer?…Not a mausoleum, not a monument, not even an inscription to tell where they lie.

When the Spaniards decided to move Columbus’ remains in 1795, to save them from the French who had just won the land in their Revolutionary Wars, they had only sparse records and the memory of the town’s oldest inhabitants to help them figure out where to look. A plain box of bones found under the altar of the cathedral in Santo Domingo were determined to be the best guess. The Spaniards packaged the remains they found into a gilt box and sent them to the cathedral in Havana. But when Cuba won independence from Spain roughly a century later, the Spaniards dug up Columbus yet again and shipped him back to Seville.

Today, the Spanish believe the giant Gothic cathedral in Seville is Columbus’ final resting place, but the Dominicans disagree. In 1877, workers repairing the Santa Domingo cathedral discovered a suspicious box of bones right next to where the Spaniards had dug in 1795. The box was covered in inscriptions that seemed to reference Columbus, including the words Illtre. y Esdo. Varon Don Cristoval Colon, which has been extrapolated and translated to mean “Illustrious and distinguished male, Don Christopher Columbus.” Some scholars have disputed the authenticity of these inscriptions, but for those in Santo Domingo, the situation seemed clear: the Spaniards had taken the wrong box.

Santo Domingo’s bishop asked governments around the world to contribute funds for a monument to Columbus’s “true” burial site. The building wasn’t finished for over a century, but today the remains that the Dominicans insist belong to Columbus rest in Santo Domingo’s Columbus Memorial Lighthouse. It’s a giant building that beams a cross of light into the night sky—a fitting tribute for a man who believed he was bringing Christianity to the world’s heathens.

These days, historians are divided about where the real Columbus is buried, and their opinion often has something to do with the color of their passport. DNA analysis has proven that the bones in Seville belong to the Columbus family, but it can’t prove whether they belong to the explorer himself. No DNA tests have been conducted on the bones in Santo Domingo. There is also a third option: Columbus could be in two places at once. Geneticists who studied the Seville bones in the early aughts said the Spanish tomb only contains about twenty percent of a skeleton, while a Yale orthopedic surgeon who studied the bones in Santo Domingo in 1960 said some of them were missing. There could be many reasons for the missing bones, but it’s possible that the Spaniards didn’t take all of Columbus, leaving some of him behind for future discoveries. And it seems only fitting that this confused explorer would be distributed among the world he found, and the one he left behind.