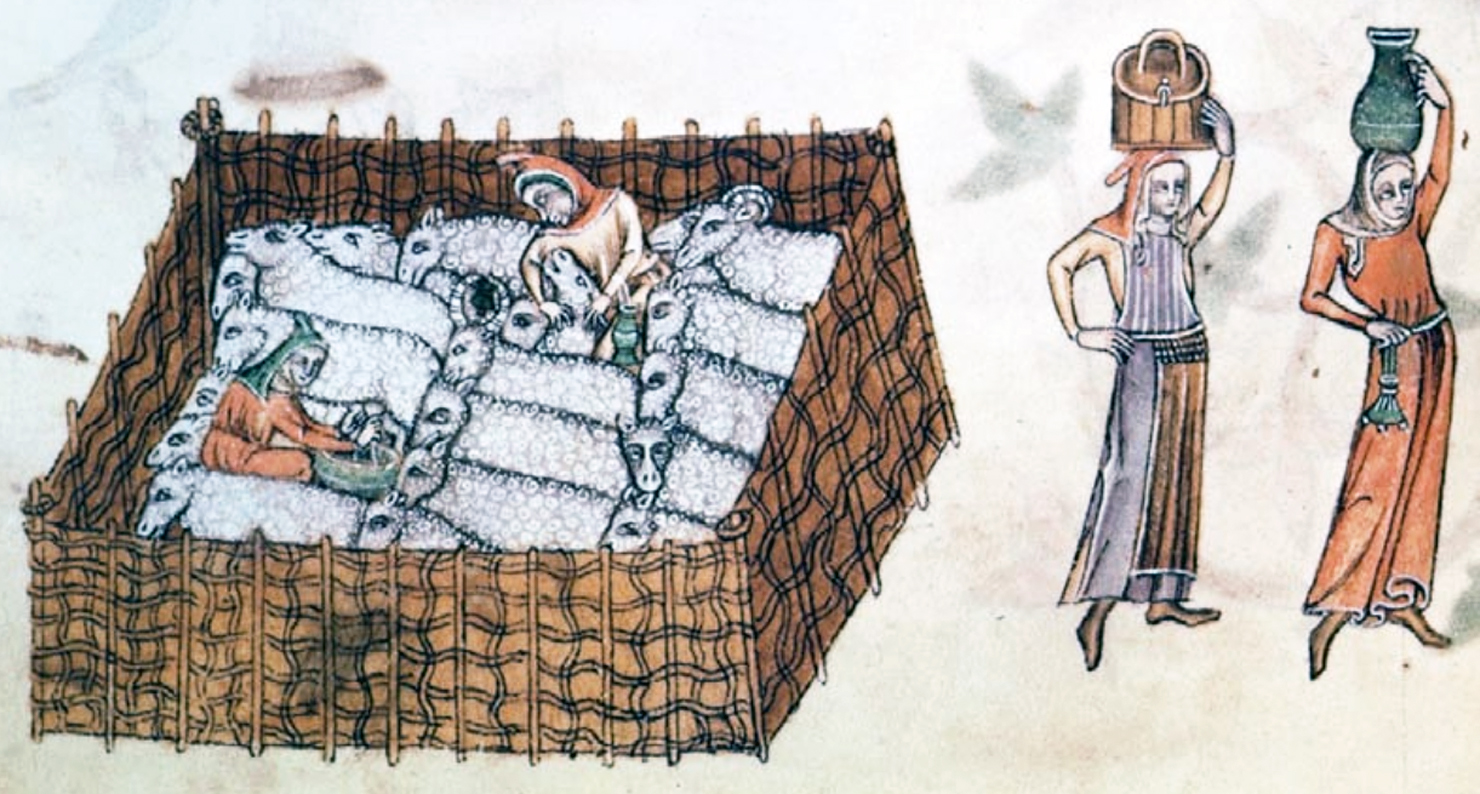 Fraud has a long prehistory that can be traced back to the swindles of wily Odysseus and the Old Testament ruse in which Jacob tricks his twin brother out of his birthright, but I’ll pick up the story in the Middle Ages. Dante Alighieri, the poet laureate of fraudulence, devotes a full thirteen cantos in his Inferno to its many varieties—pandering, flattery, office-selling, fortune-telling, strife-stirring, hypocrisy, thievery, false counsel, sowing discord, lying, and betrayal, to name a few—and to the merciless but deserved punishments visited upon its perpetrators. His successor in fourteenth-century England was a brilliant but less-recognized chronicler of fraudulent practice, the poet John Gower.

For hundreds of years, Gower has been overshadowed by his more lustrous contemporary Geoffrey Chaucer, but Gower was better known in his lifetime. If Chaucer had the lighter satiric touch, Gower had his own distinctive capacity for sputtering indignation and a searing eye for contemporary abuses when he encountered them. He saw fraud everywhere he looked, especially in that most lucrative of medieval English enterprises, the wool trade.

Wool was the most profitable medieval English industry and the duties paid on wool exports amounted to over one third of the total income of the realm. In the honest part of the business, wool was conscientiously weighed and duties collected and passed on to the royal exchequer. Any honest trading that might occur was far overshadowed, however, by an invisible wool economy based on dishonest skimming, false weighing, and other forms of smuggling and illicit profit-taking. Swaggering about London were the arrogant wool men, leading members of the mercantile elite who amassing unprecedented fortunes in the trade. Best situated of all were the Collectors of the Wool Custom who abused their positions to avoid duties, take bribes, enhance profits by weighing wet wool, favor friends, ship their own unauthorized cargoes, and engage in other profit-making scams. The most prominent wool boss in the 1370s and 1380s was Lord Mayor of London Nicholas Brembre, a onetime grocer who enriched himself with wool profits (especially while concurrently serving as Collector) and who was accused by his rivals of acting like an emperor, even scheming to rename London “New Troy.”

In Mirour de l’Omme, or “Mirror of Mankind” (written in French although Gower also wrote in Latin and English), he tackles head-on the subject of fraud in the wool trade. He creates a supernatural character—Fraude or Triche—who lives and moves among men, corrupting every vocation with which he is involved. Triche (or Trickery) is a shape-shifter, a cunning manipulator who can submerge himself in any vocational setting, exploiting it for profit and excessive accumulation, and the wool trade attracts him most of all. No wonder; as Gower notes in a mocking tribute to its power, wool and its profits literally drive people mad with acquisitive desire:

O beautiful, O white, how delicate you are,
Your love so wholly penetrates and binds
The hearts of those who trade in you
That freedom’s a lost dream for them.

This is where Triche enters; in fact, he steals the show:

Exchange, usury, and crafty dealing—
They go, O Wool, under your governance
To serve you as your courtiers;
And Triche, in turn, supplies them all.

This Triche is a reckless boundary crosser. He doesn’t confine himself to the super rich but enters every land and corrupts every kind of professional and mercantile exchange.

Go search from where the orient begins
Up to the borders of the occident,
There is no city and no fine village
Where Triche does not accumulate his gains.
Triche in Bordeaux, Triche in Seville,
Triche in Paris buys and sells;
Triche has his fleet, his family ties,
And fortune on a noble scale.

Abroad in the professions, Triche doesn’t stop with wool: he is the draper who runs a store so dimly lit that his customers cannot view his products, the goldsmith who alloys his silver, the apothecary who adulterates his medicines, the purveyor of short measures, the overcharging shopkeeper, the corrupter of apprentices, the bogus sanctuary-seeker, the usurer, the skimmer of profits, the diluter of wines, the mis-weigher of bread, the trafficker in spoiled meat, the malingering laborer.

But the premier source of fraud remained the wool trade. Its abuse provoked periodic attempts at reform: Parliament passed a number of resolutions complaining that “customs officers…have often been appointed through bribery, and from among people who are not of good standing” and that they work “for personal profit and advantage” rather than the good of the realm. Their constant request was that officers be appointed “from good and loyal men and not through pleading or special affection.” Reformers placed their greatest hope in the creation of a new position, the Controller of Customs, whose job was to keep an eagle eye on the collectors and to sign off on their activities. This new post—doomed, of course, to failure—is of special interest because it’s the one to which Gower’s friend and fellow poet Geoffrey Chaucer would be appointed shortly after Gower wrote his scathing poem. These controllers were bound to fail— perhaps they were even meant to fail. Including Chaucer, they were invariably men of less stature than the powerful politicians and well-connected merchants they were supposed to supervise, and they proved ineffective in restraining abuse. Besides, they had their own temptations to enlist in the scam. The Roman poet and satirist Juvenal had it right when he wrote about suspicious husbands hiring spies to report on the chastity of their wives: “Who,” he said, “will watch the watchmen?” (Quis custodiet ipsos custodes?)

Chaucer was, evidently, a watchman who needed to be watched, or so his contemporaries believed. He served as controller for twelve years, until a resolution of the 1386 Parliament demanded dismissal of long-serving controllers “because they perpetuate great oppressions and extortions against the people.” Although he was no whistle-blower, Chaucer’s admirers can at least console themselves that he didn’t personally enrich himself in the job. More of an enabler of fraud in others than an active perpetrator in his own right, he was in debt soon after he resigned his office. But he’d done what he needed to do to survive as a poet in fourteenth-century England.

Scathing as it was, John Gower’s attack on the wool trade had little lasting political effect. In this sense, Gower’s satires—along with those of Juvenal and Dante and even Chaucer—had something in common with all those well-intended Parliamentary statutes against dishonesty in the Wool Custom. The abuses they scourged seemed unending, but the public could at least take some relief in having the abusers named and possibly shamed.

In his poem, Gower’s recommendations for actual reform are modestly advanced and rather piecemeal. It’s not, he says, that an honest toiler should be begrudged his or her hire. In fact, as he says of merchants,

...it is right
That one who puts himself at risk
Of loss, should also have a chance at gain
If Fortune were to turn his way...
Should he gain there is no blame
So long as it occurs in fair measure
And without fraudulence...

He’s for “fair measure,” or what might be called “just profit.” A few spectacular cases of fraud were ultimately prosecuted, such as the 1376 arrest of Richard Lyons, financier and illicit wool exporter, who was impeached by Parliament for his abuses, stripped of his titles, and imprisoned in the Tower. Gower himself was a trained lawyer, although he seems more concerned with fairness than with legal or civil action.

Gower is finally most agitated, not by fraud itself but by one of fraud’s byproducts: excessive disparities of wealth. Writing about Triche’s fortune, he indignantly adds that: “Triche has ten times more than other people.” (“Triche ad disz foitz plus q’autre gent”). Here we touch hands, since such fraud-based income disparities concern us equally today. But ten times? How quaint, compared with an era when one percent control more than half the wealth of the world. Even in a feudal age famous for inequality and extortion, a medieval satirist couldn’t have imagined our present inequalities, and the impunity of present-day descendants of the fourteenth-century wool men.

Paul Strohm has been the J.R.R. Tolkien Professor at Oxford University and the Anna S. Garbedian Professor of the Humanities at Columbia University. He divides his time between Brooklyn and Oxford. He is the author of Chaucer’s Tale: 1386 and the Road to Canterbury.