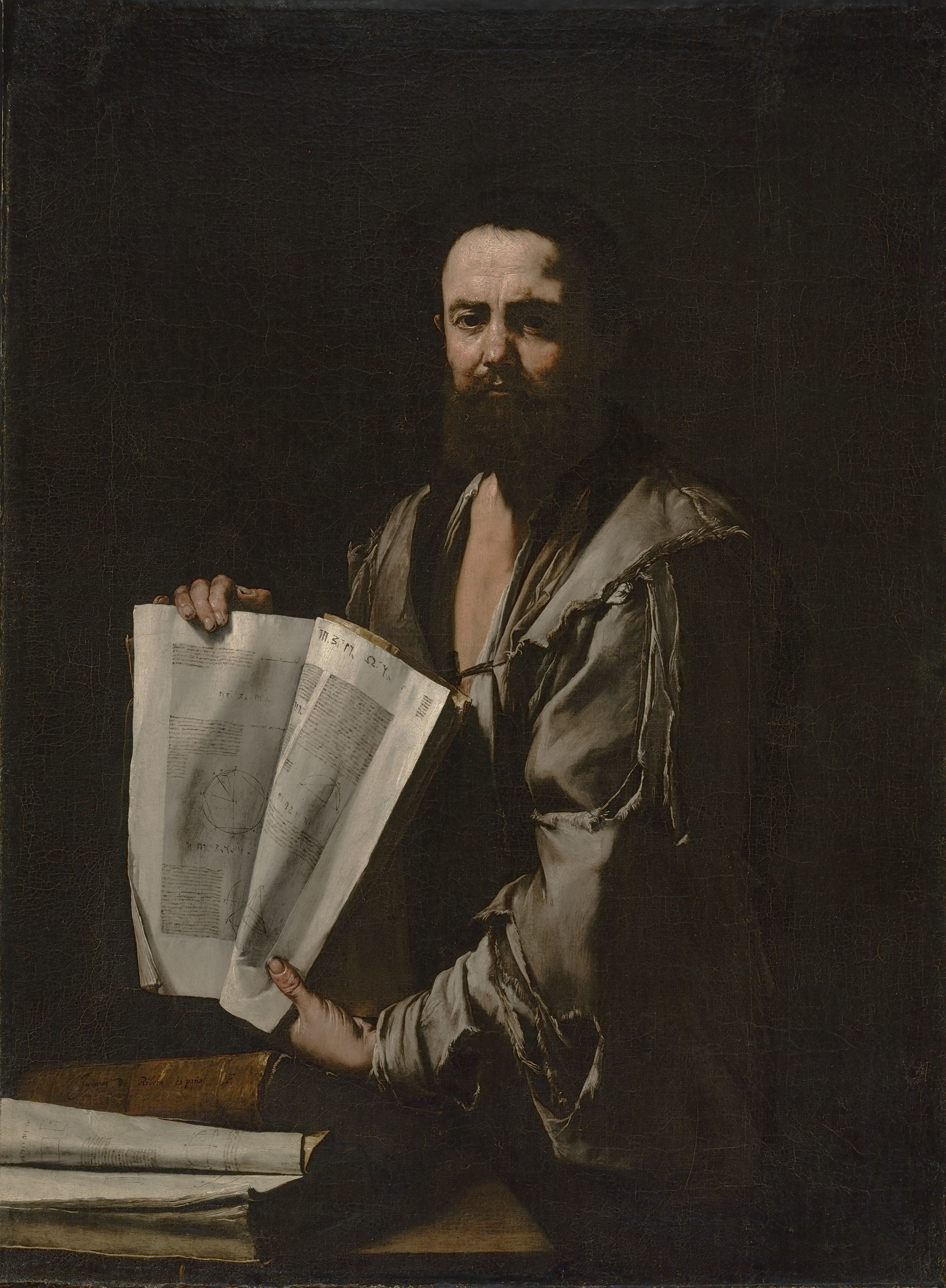 The ancient Greek mathematician Euclid’s original manuscripts for Elements of Geometry—a compendium of facts about space and its properties, lines and shapes, numbers and ratios, written around 300 bc in Alexandria—do not survive, nor anything like them. The papyrus on which he wrote is durable enough, in the right conditions. Scrolls hundreds of years old were not terribly unusual in the ancient world, and they could remain smooth, pliable, and legible for much longer. A story is told of a museum curator who used to display the strength and flexibility of papyrus by blithely rolling and unrolling an Egyptian sheet three thousand years old (this was in the 1930s, when attitudes to museum artifacts were perhaps less reverent than today).

In the right conditions, that is. Most conditions are not right. If it gets too wet, papyrus rots; too dry and it crumbles. Insect larvae like papyrus, and the worms destroyed many a literary reputation in the ancient world. So did the rats. Plus, the long rolls tore easily and were thrown away when they did. The upshot is that large or complete papyri surviving from the ancient world are extremely rare. What more often survive are fragments: discarded rolls, pieces reused to make mummy cases, pieces recovered from rubbish dumps or ruined houses. Rough, dark, and brittle with age, nearly all are from provincial locations in Middle and Upper Egypt, where the dry conditions preserved them. Finds have come from cemeteries along the Nile Valley and in the Faiyum Oasis, and from certain villages. From the big towns, by contrast, there is next to nothing: Alexandria itself, having a high water table, has no preserved papyri at all.

For all that, there are a lot of papyrus fragments. People have been systematically digging them out of the ground since the mid-nineteenth century, and hundreds of thousands are now amassed. And, yes, some of them contain fragments of Euclid’s Elements. Seven, in fact, totaling about sixty complete lines of the text and another sixty fragmentary lines. What parts of the Elements do they preserve? They include, written around 100 bc: Three propositions from book one, with one summary proof (these come as citations in a philosophical treatise preserved—carbonized—in Herculaneum by the eruption of Vesuvius in 79: an exception to the normal generalizations about papyrus survival). An enunciation from book two, with a rough figure, written in the Egyptian city of Oxyrhynchus around 100. Parts of two more propositions from book one, written at Arsinoë (modern Faiyum) in the second half of the second century. A second-century copy of three figures and enunciations from book one, carefully written with ruled diagrams. And a schoolteacher’s or pupil’s copy of the ten opening definitions, made in the third century.

It is not much: these are small pieces from the easy parts of the book, in one case from its very beginning. But they do reveal something about the way the Elements was spreading. It did not just stay in Alexandria: already, by the first few centuries after its composition, it—or parts of it—was being copied out by people hundreds of miles away around the Greek-speaking world.

It was moving out from the cultural center to the provinces. Euclid’s Elements will have been published in the ancient sense: sent to a scribal copying house which produced multiple copies for sale. But most of the papyrus fragments are not from those copies; only the Faiyum fragment looks like the work of a professional scribe. Instead, they bear witness to the activity of individuals copying out parts of the text for their own use, teaching or learning.

So, the writers of these papyrus fragments represent the “public” for Greek geometry: a tiny minority, in a world in which the literate themselves were already a minority. These were people who understood geometry, who accepted and shared its conventions, who knew enough of the basics and the methods to comprehend Euclid’s book. Their needs surely shaped what was written and how it was written. The very packaging of mathematics in a self-contained written form already presumes that they existed. But nothing more is known about them.

And this evidence can tell only about those places where it was dry enough to preserve papyrus fragments: for the rest of the Greek world—the islands and the mainland north of the Mediterranean, for instance—the lack of evidence reveals nothing, positive or negative. Surely the Elements went to Athens, for example: but it is centuries before there is evidence for that.

As well as papyrus there was a cheaper writing surface still: ostraca or pot shards. Literally, broken pieces of pot: waste, and therefore free. Ostraca were used in Egypt before the Ptolemies and up to the end of antiquity, in Athens from the seventh century bc: they were written on in ink or simply scratched, to form pictures or writing in Hieratic, Demotic, Greek, Coptic, or Arabic as the case might be. Schoolboys, soldiers, priests, and tax collectors all used them. (They were also used as voting tokens. If the word sounds familiar, it is because ostracism was a procedure for expelling a man from the country for ten years on suspicion of disloyalty: the votes were written on ostraca. It happened at Athens for most of the fifth century bc, and in other Greek cities, too.) 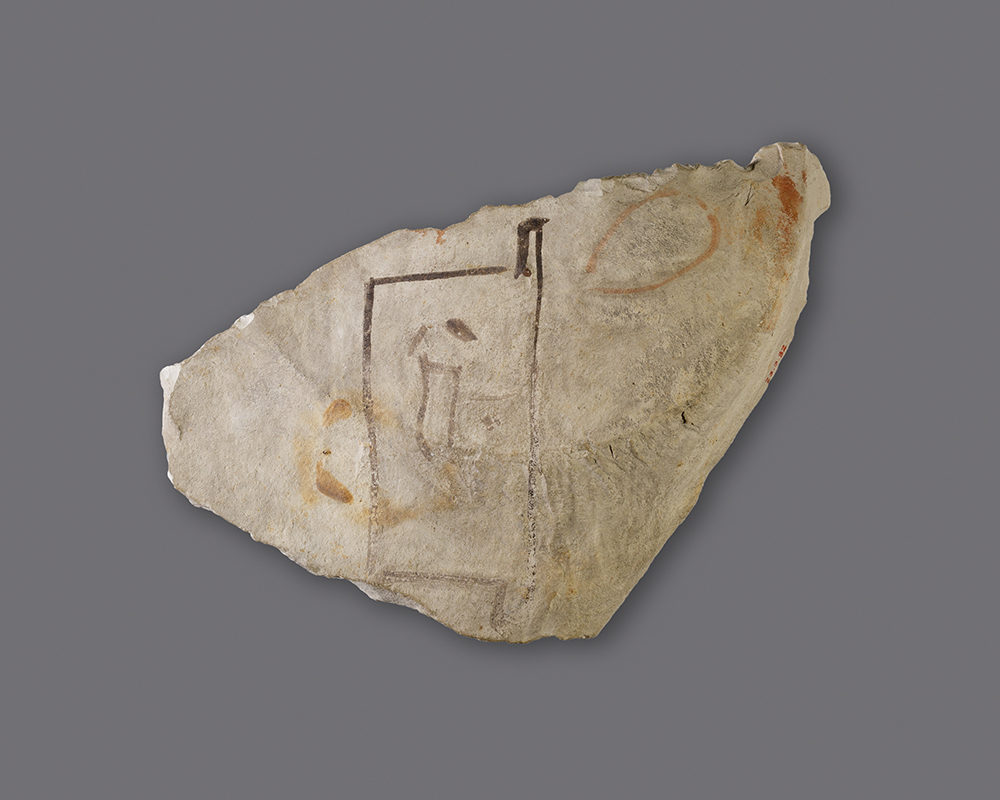 A set of ostraca bearing geometrical writing, written at Elephantine in Egypt, were preserved by the random sieve of history. They were dug up by German archaeologist Otto Rubensohn in the winters of 1906 and 1907, and they are now held with the papyrus collection at Berlin; their contents were transcribed and published in the 1930s. They are the oldest surviving physical evidence for any part of Euclid’s Elements.

Elephantine is more than five hundred miles south of Alexandria: an island in the Nile at the northern end of the first cataract. In the third quarter of the third century bc, when the ostraca were written, it was the frontier of the Ptolemaic kingdom. Traditionally the “ivory island” or “elephant island,” whose settlement stretched back into prehistory, it was the capital of the first Upper Egyptian administrative district or “nome,” controlling trade with the quarries of the cataract region and the trade route to Nubia. It was a garrison town, far removed from the centers of Greek culture, under threat from brigands.

It had temples, priests, fairly elaborate housing, and a degree of bustle; by the Byzantine period the town had a public camel yard. But the documents that have survived—papyri again, mainly—are dominated by the characteristic anxieties of soldiers settled far from their widely diverse homelands. In the third century bc there were men at Elephantine from Greek cities and islands as far afield as Crete and Rhodes as well as Alexandria and the mainland at Euboea and Phocis: a veritable Homeric catalogue of soldiers. They kept aloof from the native Egyptians, referring to their town as “the fortress,” and the papyri show them making wills, marrying, appointing guardians, providing accounts to their superiors, or petitioning them for justice. It seems a most unlikely setting for the earliest Euclidean evidence.

The ostraca—six of them, one clearly broken on all sides—bear a text concerned with constructing a regular polyhedron. It relates to propositions ten and sixteen in book thirteen of the Elements: that is, from very near the end of the book. In those propositions a pentagon, hexagon, and decagon are employed to build up an icosahedron: a regular solid with twenty sides, all of them equilateral triangles. The inevitable diagram is clearly present on one of the ostraca, with its letter labels, and the shards give a clear sense of someone doing what every Greek geometer did: draw a picture and tell a story about it.

The propositions in the Elements depend on one another in an elaborate, treelike structure, each one referring implicitly to many that have come before. To be confident in something from this late in the book, a person would need to have studied much of what came before it: but the ostraca provide no direct evidence for that. The text is in a confident, flowing handwriting, too: that of an experienced writer whose grammar and spelling were unhesitating and correct.

Who was the writer? It is most frustrating not to know. Serafina Cuomo, historian of ancient mathematics, remarks of these ostraca that “while their contents denote a high level of education, both the humble material and the location (a remote outpost in the heart of ‘Egyptian’ Egypt) seem to jar with that conclusion.” Priest, teacher, soldier, or camp follower? It will never be known whose were the hands that scratched out this earliest surviving piece of Euclideana. 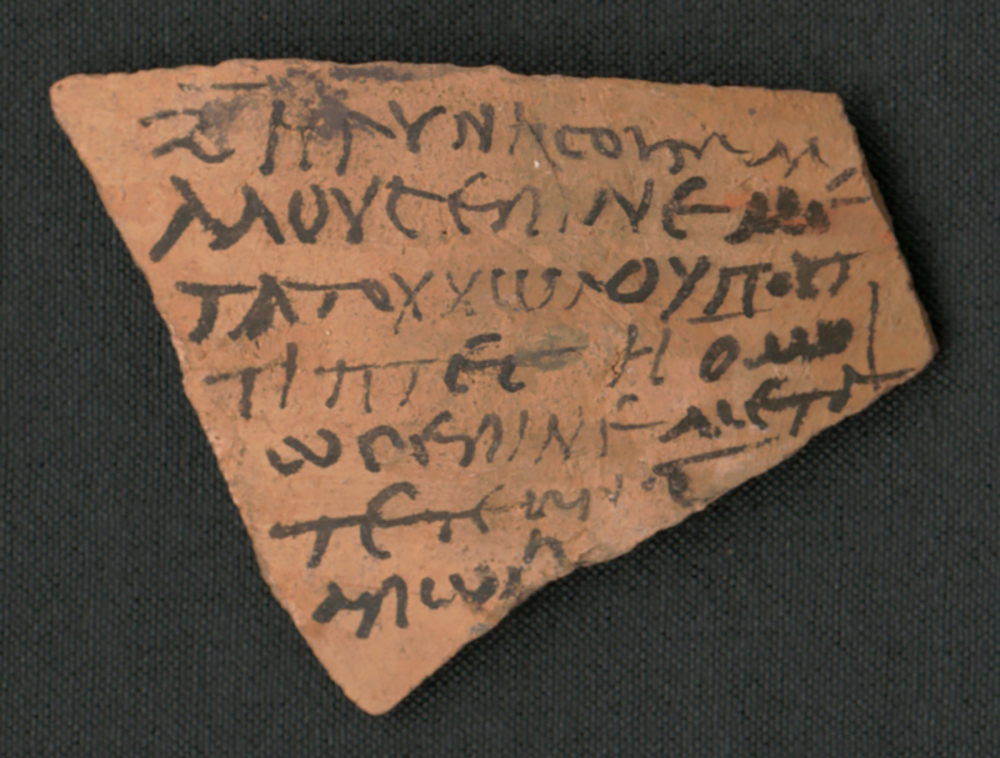 There is a further twist. The matter discussed on the ostraca came straight from Elements book thirteen, but their text is not the text that has been transmitted as part of the book. It is the same diagram and the same ideas, but the words are not exactly the same. That is also true, albeit to a lesser degree, of the other early fragments that survive from the Elements, on papyrus: their versions of the text do not exactly match what has been preserved in later, more complete versions of the book. This reinforces the sense that Greek geometry was essentially a performance, consisting of drawing a diagram and talking about it, to oneself or to an audience.

What was written down was a transcript of the performance, an aide-mémoire, a skeleton, or a set of prompts, together with the finished, static version of a diagram that, in use, had been dynamic and growing. Those written traces could be of use for private study or a help for a teacher, who would need to perform the same proof several times. They could also, as in a book like the Elements, transmit the idea of the proof or construction to people far away in time or place. And, as a result, reading a geometric proof is not like reading a novel or a poem. You can only really follow it by re-creating the original live performance, by picking up a pen and some scrap paper, papyrus, or a shard of pot, and constructing the diagram as you read, so as to see how it grows.

So the written forms of Greek geometric propositions were not so much something one would learn and copy slavishly as prompts that said: here is something interesting; try it yourself. The Elements was not a dead repository of facts but a support for learning and practice, an invitation to perform for oneself, in the same way that rhetoric textbooks aimed to prepare students for rhetorical performance. With that in mind it becomes less surprising that the early fragments of the Elements surviving on pot and papyrus have quite “wild” versions of the text. This set of ostraca, in particular, should probably be read in this way: as an attempt to re-create something the writer had read or seen performed.

It is fitting that the earliest evidence for the Euclidean Elements is so enigmatic, so shakily related to the Elements themselves, and so, literally, fragmented. The text and its ideas would travel about as widely as it is possible for a cultural artifact to travel, but they would be much changed by the journey; and, what is more, it is not clear that they were ever simple, single, and stable, even at the very beginning. Euclid was not a master but a muse, an inspiration: he did not just reveal facts but offered a set of tasks. His readers knew they could always go deeper and create more, because although the Elements had already done everything, everything was still to be done. 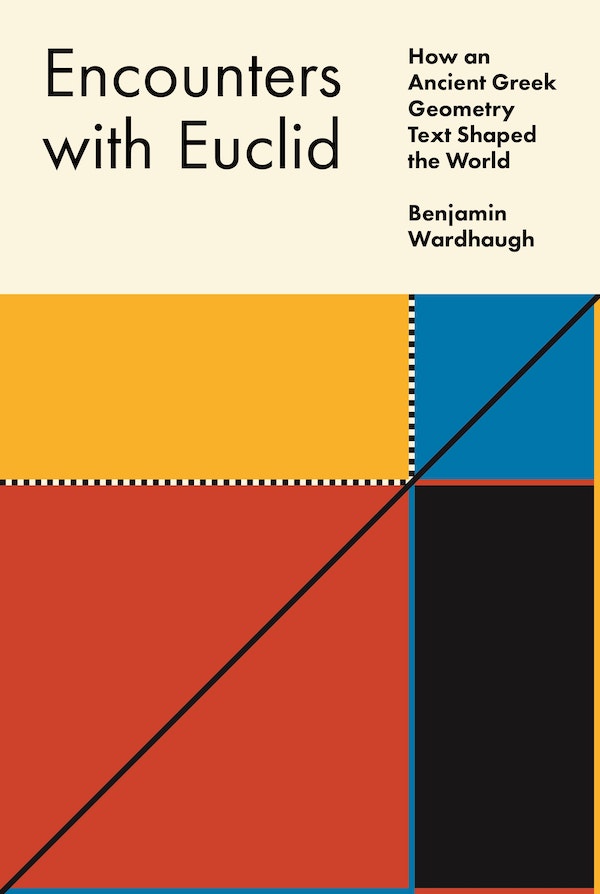 Benjamin Wardhaugh is a historian of mathematics. He is the author of Encounters with Euclid: How an Ancient Greek Geometry Text Shaped the World; Gunpowder and Geometry: The Life of Charles Hutton, Pit Boy, Mathematician, and Scientific Rebel; and How to Read Historical Mathematics. He lives in Oxford, England.