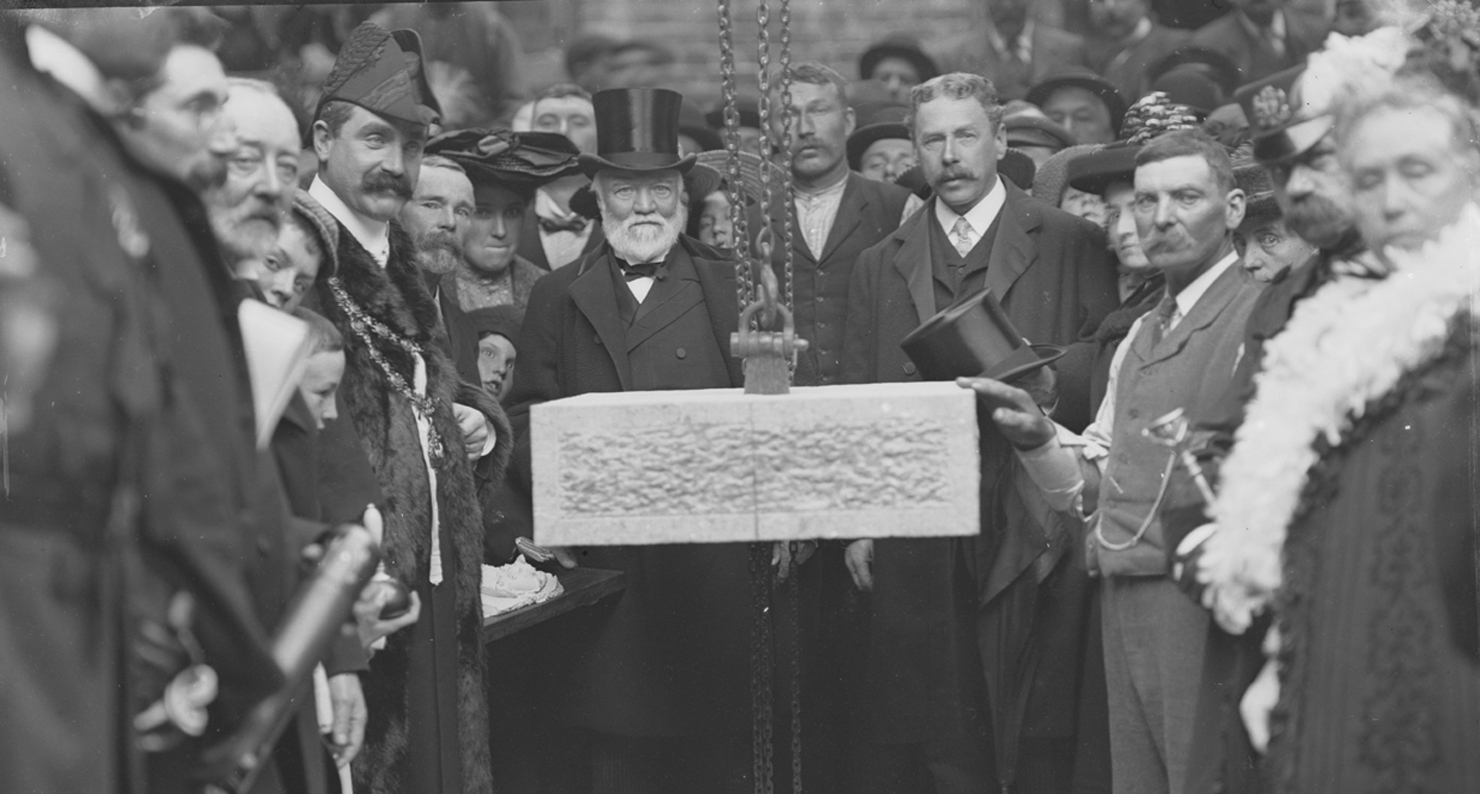 Andrew Carnegie at the laying of a foundation stone at a Carnegie library, 1903. National Library of Ireland.

In March of 1889, the first Carnegie library in the United States opened its doors in Braddock, Pennsylvania. It was the first free municipal library in Pennsylvania, and one of fewer than 700 in the United States. The handsome sandstone building, which cost $100,000 to build (over $2.5 million today), did not have a suitably large auditorium, so the dedication—attended by a crowd of two thousand—was held off-site. The congregated people of Braddock, whom the local paper described as “an immense gathering of enthusiastic and cheering citizens,” gave Carnegie, his wife, and his friends a “royal welcome,” with music from a band and a glee club preceding the ceremonies.

Carnegie was touched: “I have been privileged to build this library for you, and to be present tonight, in accordance with your wishes, to hand it over to you and your successors forever,” he said. He encouraged the workers of Braddock to save their money in a Carnegie-owned bank, and urged them toward self-improvement and pleasure: “I hope you will all lead not only prosperous but happy lives. Never miss a chance to laugh.”

The occasion, however, was also something of a victory lap for Carnegie. Less than two years earlier, he had successfully forced the Amalgamated Association of Iron and Steel Workers (AAISW) from the Braddock steel mill, and reverted the facility back to a twelve-hour workday—from the hard-won eight-hour workday for which the AAISW had fought. He referred to this event only elliptically, as “a memorable occasion, when we had a little unpleasantness, which is happily forgotten and forgiven on both sides.” Nonetheless, Carnegie used his speech to make his stance clear: “The fatal enemy of labor is labor, not capital.”

That the library was meant to be a peace offering was not lost on those in attendance. “There seemed to a sort of ‘grin and bear it’ feeling prevailing,” the Homestead Local News reported. “As if the library and good advice tendered was counting for one for the people and a half dozen for Mr. Carnegie.” From the first, Carnegie’s munificence was closely tied to his ruthlessness.

Andrew Carnegie first articulated his commitment to philanthropy in 1868, in a letter he wrote to himself. “The amassing of wealth is one of the worst species of idolatry,” he wrote. He vowed to retire at thirty-five and limit his income to $50,000 a year. “Beyond this I need ever earn, make no effort to increase my fortune, but spend the surplus each year for benevolent purposes!” Though Carnegie did neither of these things, he did ultimately give away $350 million; he spent $60 million endowing library construction alone.

The Braddock library was fully endowed—Carnegie covered both the construction costs and the operating budget—but in most cases, Carnegie paid for library buildings, but not for books or operations. If a town could demonstrate need, it would receive a grant only if it could also provide books, a building site, and an annual operating budget (calculated to be 10 percent of the construction cost). Carnegie believed fully funded library endowments would allow communities to take his generosity for granted. “An endowed institution is liable to become the prey of a clique,” he wrote. “The public ceases to take interest in it, or, rather, never acquires interest in it. The rule has been violated which requires the recipients to help themselves.”

That he provided the money for lavish buildings, but not for books, only fueled his contemporaries’ accusations that Carnegie was constructing monuments to himself. But endowing library construction—and requiring communities to shoulder the operating costs—was in clear alignment with the principles Carnegie outlined in The Gospel of Wealth in 1887:

The surplus wealth of the few will become…the property of the many, administered for the common good; and this wealth, passing through the hands of the few, can be made a much more potent force for the elevation of our race than if distributed in small sums to the people themselves…[T]he best means of benefiting the community is to place within its reach the ladders upon which the aspiring can rise—free libraries, parks, and means of recreation, by which men are helped in body and mind; works of art, certain to give pleasure and improve the public taste; and public institutions of various kinds, which will improve the general condition of the people; in this manner returning their surplus wealth to the mass of their fellows in the forms best calculated to do them lasting good.

Carnegie’s philanthropy consisted not of handouts, but of investments in civic institutions. He was particularly interested in libraries because he believed that “self-help is the basis of every improvement, material, intellectual or spiritual, and that no mode of public benefaction could be chosen which exacted cooperation from the individual to such an extent as the public library.” The library was also a symbol of his own self-making. In his autobiography, Carnegie credited access to a benefactor’s library as the force that kept him “clear of low fellowship and bad habits” in his youth.

At first, Carnegie’s project was highly targeted: between 1886 and 1896, the fourteen U.S. libraries he constructed (at a cost of $1.8 million) were all located in Pennsylvania towns where he owned industrial facilities. Carnegie’s contemporaries had to consider the construction of these early libraries within the context of larger questions about his labor politics: by the time he dedicated the Braddock library, Carnegie had successfully broken the unions at every one of his steel mills, except the nearby Homestead Steelworks. At the Braddock dedication, Carnegie read from a letter he’d recently received from someone in Homestead:

In the summer of 1892, three years after the dedication in Braddock, nine workers died when Henry Clay Frick—Carnegie Steel’s chairman, and Carnegie’s partner and deputy—brought in three hundred Pinkerton agents to break the AAISW strike at the Homestead plant. Though Carnegie was out of the country at the time, he had fully authorized Frick to act as he saw fit.

Carnegie’s reputation for largesse was instantly undermined by the carnage at Homestead. The dust had barely settled when Pittsburgh unions, led by Window Glass Workers Lodge No. 300, petitioned their city council to return a $1 million gift to Carnegie. As one local labor leader put it: “I would sooner enter a building built with the dirty silver Judas received for betraying Christ than enter a Carnegie library.” Several months later, the St. Louis Post-Dispatch editorialized, “Ten thousand ‘Carnegie Public Libraries’ would not compensate the country for the direct and indirect evils resulting from the Homestead lockout.”

It is little known that 225 communities—twenty of them in Pennsylvania—were offered, but did not ultimately accept, Carnegie grants. Sometimes the reasons were mundane: another local philanthropist stepped in to pay for the construction; the community already had a library facility; the community was unable to muster sufficient resources for the required annual operating budget; the advent of World War I made building costs soar. But in a handful of cases, organized local opposition deliberately scuttled plans for building a Carnegie library. A small number of cities—perhaps a dozen—explicitly rejected Carnegie grants because, as one writer put it when Detroit rejected a proposed gift of $750,000 in 1902: “It doesn’t seem to me as though it would be a proper thing for this town to accept a big chunk of money as a gift from a man who has made his money the way Carnegie did.”

In Wheeling, West Virginia, the Ohio Valley Trades and Labor Assembly (which included an AAISW local) organized opposition to the city’s plans to build a Carnegie library, campaigning strenuously against the $50,000 bond measure the city would need to pass to buy land and books. “God forbid that one of my children should ever bring home a book from a Carnegie library,” a steel worker said in the days before the election. He hoped Wheeling would be “one place on this great green planet where Andrew Carnegie can’t get a monument with his money.” The 1904 bond measure was narrowly defeated, and Wheeling ultimately financed the construction of a new public library without Carnegie’s money. The library opened in 1911.

American labor leaders were not all of one mind on the question of Carnegie money. When a Toronto factory worker wrote to Samuel L. Gompers, head of the American Federation of Labor, to ask whether the city should accept Carnegie’s proposed $350,000 gift, Gompers replied:

The matter is one of entire indifference on our part. If justice had been done to labor it is very doubtful if either he or anyone else could have accumulated such fabulous wealth…After all is said and done, he might put his money to a much worse use. Yes, accept his library, organize the workers, secure better conditions and, particularly, reduction in hours of labor, and then the workers will have some chance and leisure in which to read books.

Eugene V. Debs, who went on to found the International Workers of the World, had much harsher words for those who accepted Carnegie’s gifts, writing in 1901: “Will the workingmen of this country accept any gift from the hands of Andrew Carnegie, red with the blood of their slain comrades? That some of them have already done so is to their everlasting shame.”

Ultimately, many felt as Mark Twain wrote in 1907:

“It is possible but not likely that Carnegie thinks the world regards his library scheme as a large and unselfish benevolence; whereas the world thinks nothing of the kind. The world thanks Mr. Carnegie for his libraries and is glad to see him spend his millions in that useful way, but it is not deceived as to the motive.”

Homestead eventually got a library, too—one even more lavish than Braddock’s—constructed at a cost of $300,000. In November of 1898, Andrew Carnegie and his wife attended the dedication, held in the building’s 1,000-seat music hall. According to Library Journal, “the ceremonies included a great parade of 8,000 people, including hundreds of employees of the Homestead steel works.”

The memory of the Homestead strike was not far from anyone’s mind that day; during the events of 1892, the state militia had camped on the very site where the new building stood. Carnegie spoke directly to these painful memories:

For the first time, my friends, I stand before a Homestead audience with peculiar feelings. Mrs. Carnegie felt that she must be with me at Homestead…The one great pain of our united lives, arising from business, and which has haunted us for years, came from the deplorable event here, which startled us when far away, and which even yet has not lost its power at intervals to sadden our lives.

Carnegie clearly hoped that the gift of a new library would smooth over the memory of the conflict—that the new building might “stamp a new picture of Homestead upon our minds” and “enable us to banish the cruel memories of the past forever.”

Whether or not the crowd at Homestead accepted his benediction (“By this meeting, by your welcome…all the regretful thoughts, all the unpleasant memories are henceforth and forever in the deep bosom of the ocean buried”), Carnegie did succeed in a larger way. His library project has become one of the most enduring aspects of his philanthropic legacy, which itself has largely occluded the memory of his role in the labor strife at Homestead and elsewhere. He was at least as much a robber baron as he was the “patron saint of libraries,” but Carnegie is still principally invoked as America’s beneficent rich uncle who built temples to human knowledge—rather than as a calculating industrialist with an army of private detectives at his command. The few principled refusals to accept Carnegie’s benefactions have become but a footnote in the grand history of his generosity, stains in shadows of monuments.

Jacqui Shine is a writer and historian who studies depictions of crime and the justice system in the media. She is a PhD candidate in history at the University of California, Berkeley. She lives in Chicago.