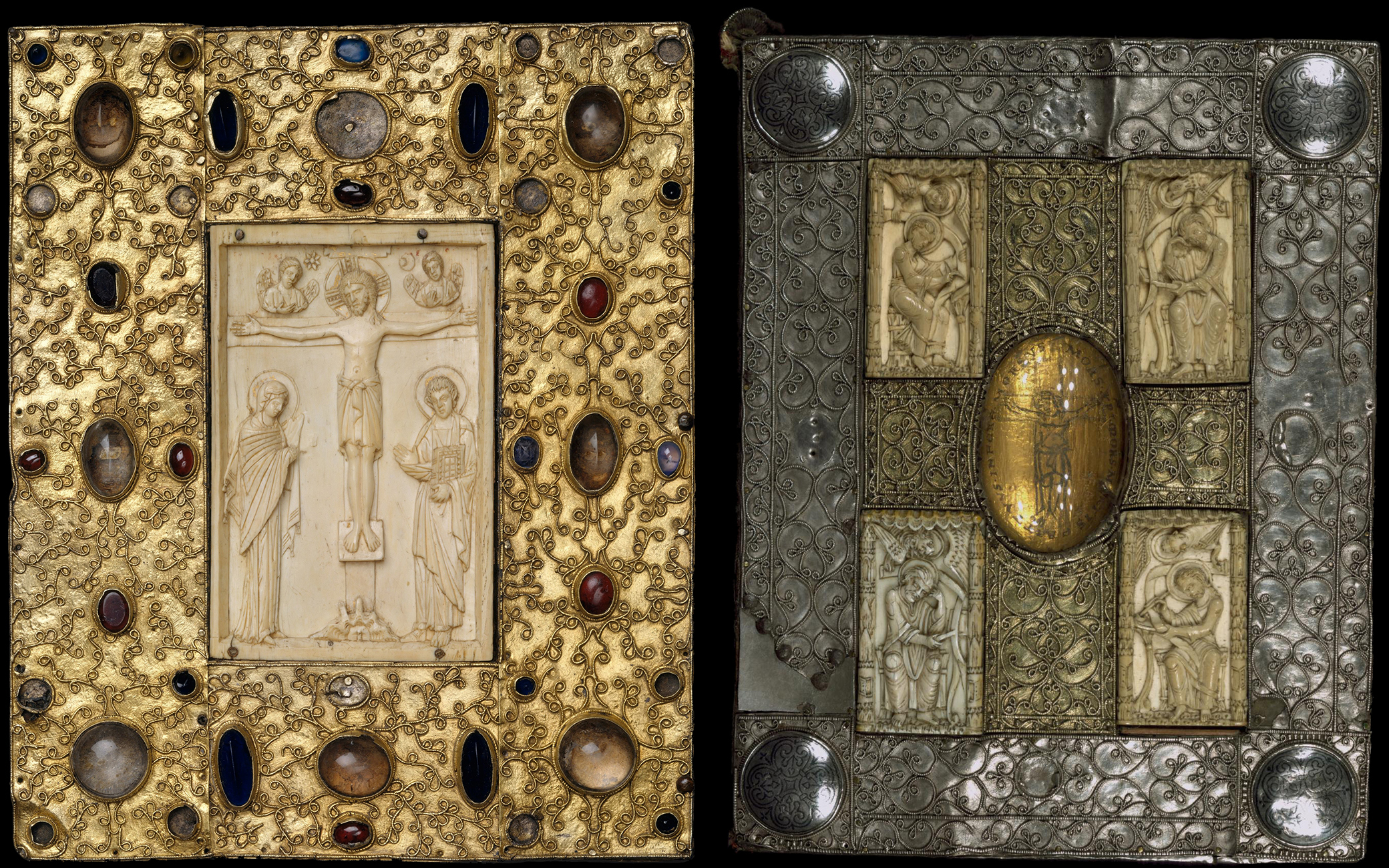 (L) Book cover with Byzantine icon of the Crucifixion produced for the nunnery of Santa Cruz de la Serós, Spain, c. 1085. The Metropolitan Museum of Art, gift of J. Pierpont Morgan, 1917. (R) Treasure binding with the Evangelists and the Crucifixion by Othlon of Regensburg, c. 1030–50. The Walters Art Museum, acquired by Henry Walters.

In medieval Western Europe, the book was an essential tool for rational debate, but its power went beyond reason. This was an age when a book could work miracles: the book was so much more than a container for words inscribed on pages.

The written word wielded power in part because of the rarity of the skills required to comprehend it, let alone compose in it. In the later Middle Ages, books were produced in increasing quantities for increasingly diverse audiences, but even then, as earlier, in Christendom, literacy was always the reserve of the few. This situation contrasted with Judaism where, at least in theory, every adult male was expected to be able to transcribe the holy texts. It was also a situation that continued to pertain in England in the early eighteenth century: most people were incapable of signing their names. If we move back from that date just three hundred years, we find that reliable estimates are difficult to extrapolate from the incomplete and incidental evidence available: some optimistic assessments would have about a third of England’s population being in some way literate; a soberer guess puts the rate of full literacy closer to one in ten. Those contrasting figures partly reflect complexities of definition. The ability to sign does not necessarily demonstrate wider skills of writing or reading; at the same time, an inability to mark the page with more than a cross does not categorically disprove a capacity to read, even perhaps to a level of some fluency. What is certain is that there was substantial variation and some of the factors affecting that are clear. You were more likely to be able to write if you were a man, not a woman, and if you were one of the minority who lived in a town, not the countryside. Even if you were an urban male, the probability remained that you would be illiterate, unless you were fortunate enough to have been born toward the end of our period into a good family in Florence, which probably had the highest rates of literacy in Europe. Both a result of and a reason for the increase in literacy in that city was the development there, and elsewhere in northern Italy, of education in the vernacular. In other places and at other times, school meant Latin, and instruction was primarily intended for boys who were going to enter the church. The bond between learning and religion remains in English, latent in the double meaning of clerical (contrast clerical assistant with clerical garments). The implication is that those who came to gain some facility in reading and writing in their mother tongue may not have had access to the lingua franca of communication shared across Europe. Only a minority of the small minority who were literate were so literate to the level of being literati.

Readers were few, but writing was everywhere. You might not have been able to decipher the letters, but you would have been hard pressed to escape encounters with texts. Words were written on wooden markers or chiseled on stones in your local graveyard and painted on the walls of your parish church. They were carried in your purse, as the legend—the literal meaning of which is “what must be read”—on coins. They might travel close to your flesh, as short texts stored in amulets to bring good fortune and ward off evil. Written records were also a technology of control, the documents held by landowners defining the dues they claimed from those who lived on their land—and so writing was, for some, an object of hatred, a symbol of oppression, to be destroyed when the opportunity allowed, as during the Flemish peasants’ revolts of 1323–28, the Jacquerie rebellion in northern France that began in 1358, and England’s Peasants’ Revolt of 1381. 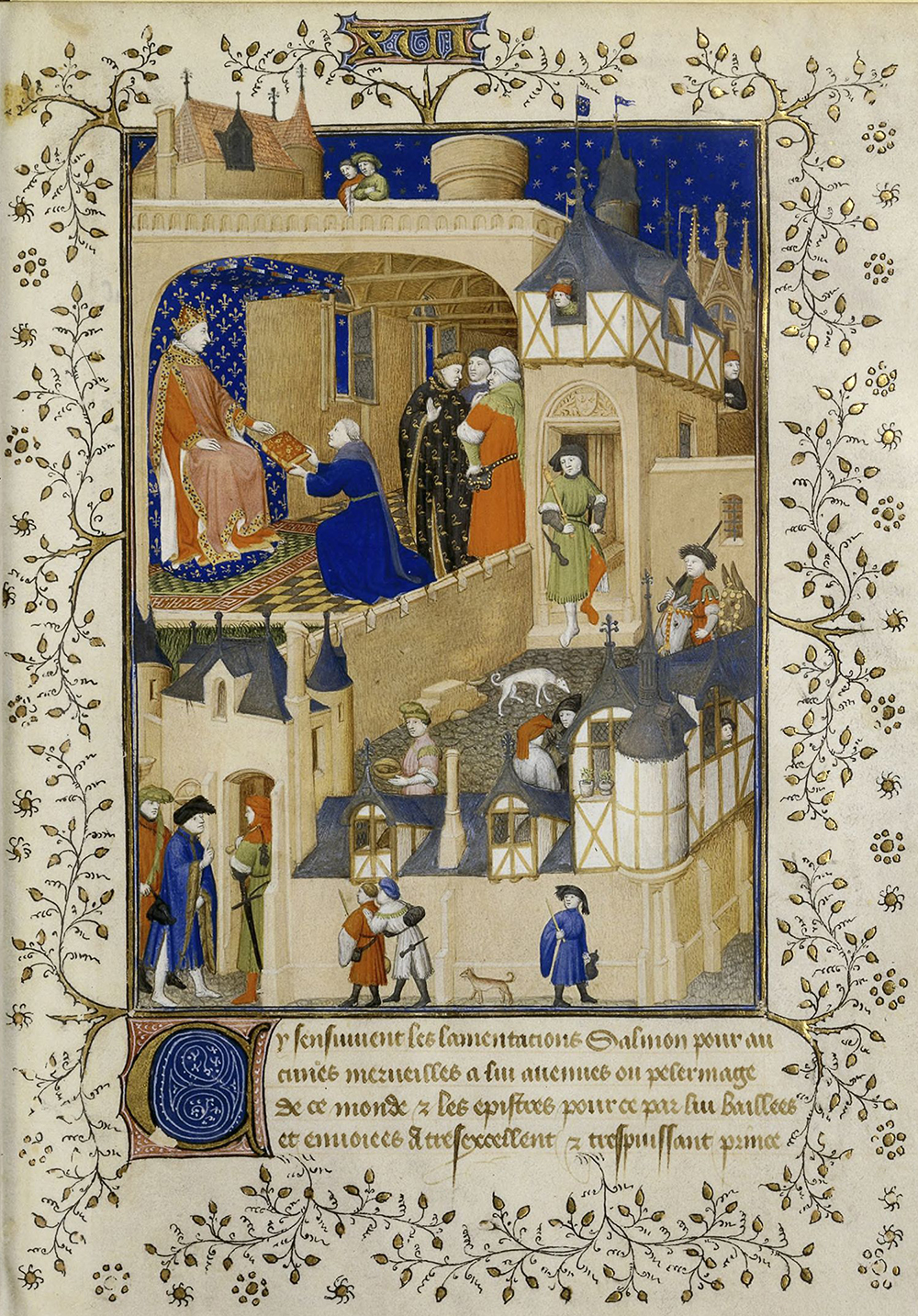 Lettering was applied to many objects. On a wax tablet, a text could be drafted and then removed by heating, leaving the surface smooth and ready to be reused. Also generally ephemeral in its intended use was the birch bark on which texts were written (usually, as on wax, with a stylus) in Eastern Europe, from the Baltic to Ukraine. In contrast, the comparatively short-lived practice in Viking lands in the late tenth and eleventh centuries of engraving and coloring runes on stones was consciously monumental, as was the tradition of epigraphy in the Latin West. A lasting record could also be committed to parchment: in English legal practice, an agreement might be written—twice—on one sheet, which was then cut in two so each party had a copy; a simple guard against forgeries was to make the cut with a jagged line looking like a set of teeth, and thus comes our word indenture. Sets of records on individual pages might be sewn together and stored as a roll. Of all the vehicles for the written word, however, the structure which ties together multiple sets of leaves and places them within a protective cover—in short, the book—had, in Christendom, a privileged status. An element of this is purely pragmatic, turning the leaves being less cumbersome than unfurling and furling a scroll. Practicality, of course, could be trumped by higher considerations. In Jewish communities, while whole Bibles were produced as books, the traditional design for a synagogue’s Torah (the five books of Moses that open the Bible) was as a scroll, the care required in handling it having the virtue of being a ritual of respect for the text’s holy nature. There was, throughout this period, no parallel use of multiple formats for Christian scripture, and so the material volume and its contents became synonymous: the Good Book was both text and object.

The artisans who created manuscripts of the Bible were often conscious of the need to make their product worthy of the veneration the text should inspire. It could be said that they were working with unpromising raw materials. In an Anglo-Saxon riddle from the tenth-century Exeter Book (so called because it was given to that cathedral by its first bishop, Leofric), a voice speaks from beyond death (here, in Richard Hamer’s translation):

Some enemy deprived me of my life
And took away my worldly strength, then wet me,
Dipped me in water, took me out again,
Set me in sunshine, where I quickly lost
The hairs I had. Later the knife’s hard edge
Cut me with all impurities ground off.
Then fingers folded me; the bird’s fine raiment
Traced often over me with useful drops
Across my brown domain, swallowed the tree-dye
Mixed up with water, stepped on me again
Leaving dark tracks. The hero clothed me then
With boards to guard me, stretched hide over me,
Decked me with gold…

The enemy is a parchment maker, killing an animal and preparing its skin. The riddle does not say what animal—sheep, goats, and cattle were all used, with the most highly prized surface being known as uterine vellum, suggesting it came from a stillborn or neonatal calf (the term vellum—related to English veal—is sometimes reserved for parchment from calves, but medieval sources do not insist on the distinction). The poem’s description of the preparation is brutal but also understated: to remove the follicles, the washed skin had to be soaked for days in a solution, usually of lime but sometimes of urine. In twelfth-century Toledo, there is also talk of dog excrement being employed. The parchment was then scraped smooth, as the riddle describes. The poem goes on to imagine the sheets being compiled into gatherings or quires, and the scribe drawing lines on the page, using a quill of a feather (the “bird’s fine raiment”) into which is poured ink, usually made from oak galls—that is, growths on the bark caused by insect larvae (thus “tree-dye”). From these earthy elements, a book is born. It is beautified: the “hero” is the binder who uses wood (“boards”) and leather (“hide”), finished with a gold plaque. This last detail tells us it would have been a special volume. The riddle ends by giving a hint of what it was:

Say who I am, useful to men. My name
Is famous, good to men, and also sacred.

The “me” of the riddle has been transformed from the carcass of a beast of the field to something holy, a manuscript conveying God’s word. The metamorphosis—from creature to creation in touch with the Creator—was, in an earlier, eighth-century Latin riddle, perceived as nothing short of an apotheosis: “Before the voice in us sounded without saying a word, but now we express words, without having our own voice.”

From “Medieval Western Europe” by David Rundle, in The Oxford Illustrated History of the Book, edited by James Raven. Copyright © 2020 by Oxford University Press. All rights reserved. David Rundle is Lecturer in Latin and Manuscript Studies, Centre for Medieval and Early Modern Studies, University of Kent, and the author of The Renaissance Reform of the Book and Britain. He specializes in Renaissance intellectual and cultural history, in particular using the paleographical and codicological evidence of manuscripts to spread the circulation of humanist ideas across Europe in the fifteenth and early sixteenth centuries. He also writes on the history of libraries and on the dispersal of medieval book collections and is the editor of Humanism in Fifteenth-Century Europe.