The door opened, and a handsome-looking man of about thirty-two years of age entered the room. The count approached me with a frank and friendly air.

I endeavored to be self-possessed and began to introduce myself, but he anticipated me. We sat down. His conversation, which was easy and agreeable, soon dissipated my awkward bashfulness. I was already beginning to recover my usual composure when the countess suddenly entered, and I became more confused than ever. She was indeed beautiful. The count presented me. I wished to appear at ease, but the more I tried to assume an air of unconstraint, the more awkward I felt. They, in order to give me time to recover myself and to become accustomed to my new acquaintances, began to talk to each other, treating me as a good neighbor, and without ceremony. Meanwhile, I walked about the room, examining the books and pictures. I am no judge of pictures, but one of them attracted my attention. It represented some view in Switzerland, but it was not the painting that struck me, but the circumstance that the canvas was shot through by two bullets, one planted just above the other.

“A good shot that!” said I, turning to the count.

“Yes,” replied he, “a very remarkable shot…Do you shoot well?” he continued.

“Tolerably,” I said, rejoicing that the conversation had turned at last to a subject familiar to me. “At thirty paces I can manage to hit a card without fail—I mean, of course, with a pistol I am used to.”

“Really?” said the countess, with a look of the greatest interest. “And you, my dear, could you hit a card at thirty paces?”

“Some day,” replied the count, “we will try. In my time I did not shoot badly, but it is now four years since I touched a pistol.”

“Oh!” I observed, “in that case, I don’t mind laying a wager that Your Excellency will not hit the card at twenty paces. The pistol demands practice every day. I know that from experience. In our regiment I was reckoned one of the best shots. It once happened that I did not touch a pistol for a month, as I had sent mine to be mended. Would you believe it, Your Excellency, the first time I began to shoot again, I missed a bottle four times in succession at twenty paces? Our captain, a witty and amusing fellow, happened to be standing by, and he said to me, ‘It is evident, my friend, that your hand will not lift itself against the bottle.’ No, Your Excellency, you must not neglect to practice, or your hand will soon lose its cunning. The best shot I ever met used to shoot at least three times every day before dinner. It was as much his custom to do this as it was to drink his daily glass of brandy.”

The count and countess seemed pleased I had begun to talk. 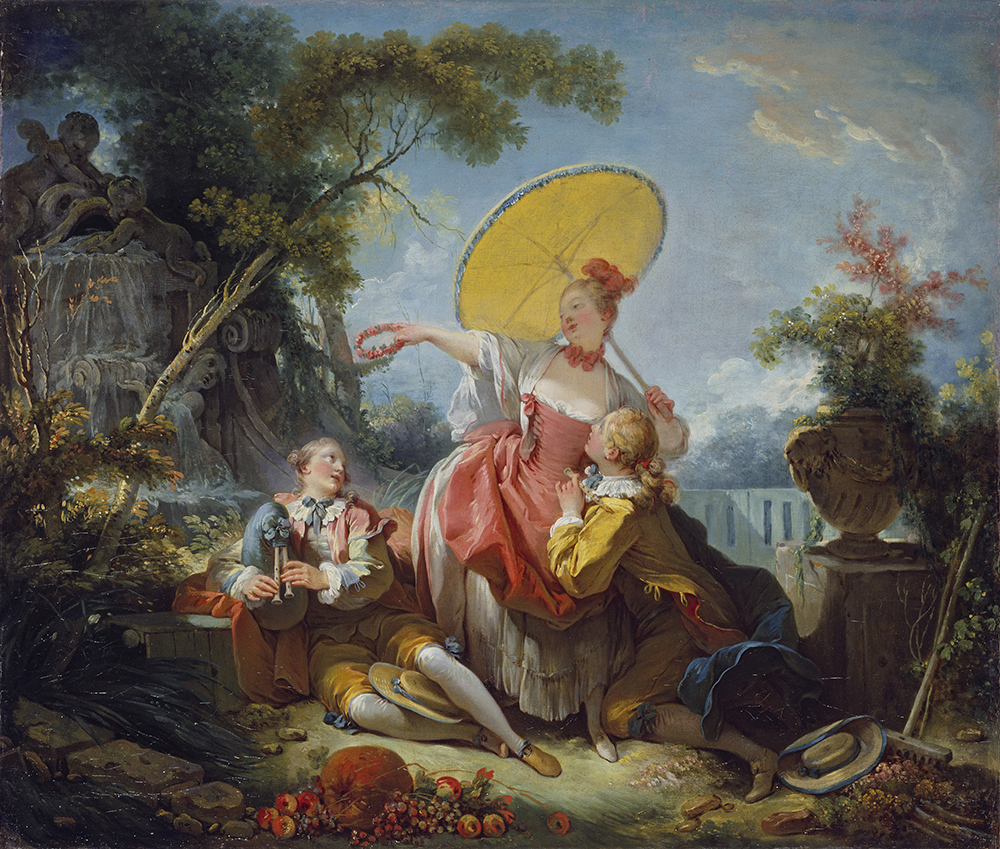 The Musical Contest, by Jean-Honoré Fragonard, c. 1755. © By kind permission of the Trustees of the Wallace Collection, London / Art Resource, NY.

“And what sort of a shot was he?” asked the count.

“Well, it was this way with him, Your Excellency: if he saw a fly settle on the wall—you smile, countess, but, before heaven, it is the truth—if he saw a fly, he would call out, ‘Kouzka, my pistol!’ Kouzka would bring him a loaded pistol—bang! And the fly would be crushed against the wall.”

“Wonderful!” said the count. “And what was his name?”

“Silvio!” exclaimed the count, starting up. “Did you know Silvio?”

“How could I help knowing him, Your Excellency? We were intimate friends. He was received in our regiment like a brother officer, but it is now five years since I had any tidings of him. Then Your Excellency also knew him?”

“Oh, yes, I knew him very well. Did he ever tell you of one very strange incident in his life?”

“Does Your Excellency refer to the slap in the face that he received from some blackguard at a ball?”

“Did he tell you this blackguard’s name?”

“No, Your Excellency, he never mentioned his name. Ah! Your Excellency!” I continued, guessing the truth. “Pardon me. I did not know—could it really have been you?”

“Yes, I myself,” replied the count with a look of extraordinary agitation. “And that bullet-pierced picture is a memento of our last meeting.”

“Ah, my dear,” said the countess, “for heaven’s sake, do not speak about that. It would be too terrible for me to listen to.”

We die of comfort and by conflict live.

“No,” replied the count, “I will relate everything. He knows how I insulted his friend, and it is only right that he should know how Silvio revenged himself.”

The count pushed a chair toward me, and with the liveliest interest, I listened to the following story:

“Five years ago I got married. The first month—the honeymoon—I spent here, in this village. To this house I am indebted for the happiest moments of my life as well as for one of its most painful recollections. One evening we went out together for a ride on horseback. My wife’s horse became restive. She grew frightened, gave the reins to me, and returned home on foot. I rode on before. In the courtyard I saw a traveling carriage, and I was told that in my study sat waiting for me a man, who would not give his name, but who merely said he had business with me. I entered the room and saw in the darkness a man covered with dust and wearing a beard of several days’ growth. He was standing there, near the fireplace. I approached him, trying to remember his features.

“ ‘You do not recognize me, count?’ said he, in a quivering voice.

“ ‘Silvio!’ I cried, and I confess that I felt as if my hair had suddenly stood on end.

“ ‘Exactly,’ continued he. ‘There is a shot due to me, and I have come to discharge my pistol. Are you ready?’

“His pistol protruded from a side pocket. I measured twelve paces and took my stand there in that corner, begging him to fire quickly, before my wife arrived. He hesitated and asked for a light. Candles were brought in. I closed the doors, gave orders that nobody was to enter, and again begged him to fire. He drew out his pistol and took aim. I counted the seconds—I thought of her. A terrible minute passed! Silvio lowered his hand.

“ ‘I regret,’ said he, ‘that the pistol is not loaded with cherry stones. The bullet is heavy. It seems to me that this is not a duel but a murder. I am not accustomed to taking aim at unarmed men. Let us begin all over again. We will cast lots as to who shall fire first.’

“My head went round. I think I raised some objection. At last we loaded another pistol and rolled up two pieces of paper. He placed these latter in his cap—the same through which I had once sent a bullet—and again I drew the first number. 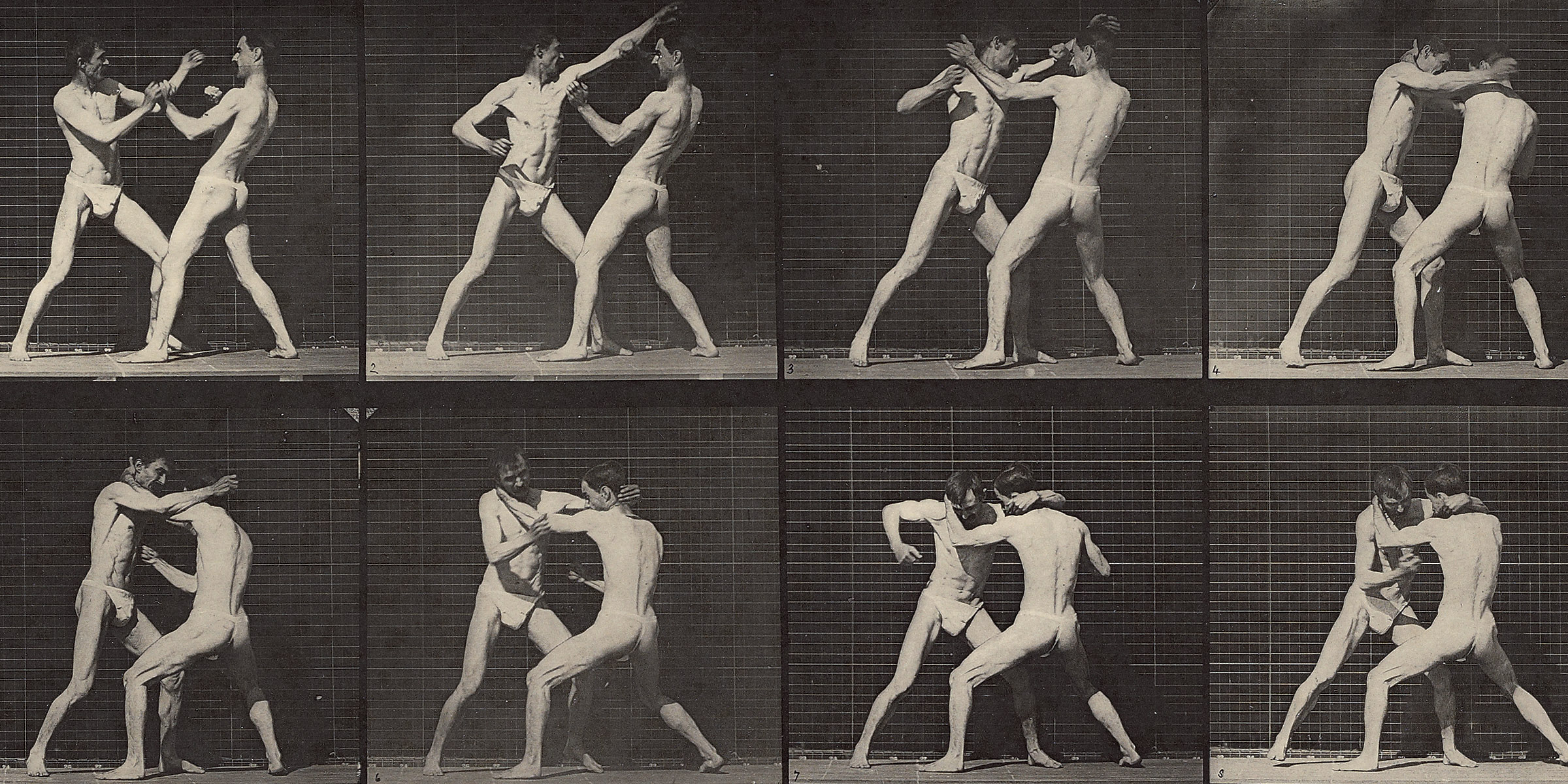 “ ‘You are devilish lucky, count,’ said he, with a smile I shall never forget.

“I don’t know what was the matter with me, or how it was that he managed to make me do it, but I fired and hit that picture.”

The count pointed with his finger to the perforated picture. His face glowed like fire; the countess was whiter than her own handkerchief. I could not restrain an exclamation.

“I fired,” continued the count, “and, thank heaven, missed my aim. Then Silvio—at that moment he was really terrible—Silvio raised his hand to take aim at me. Suddenly the door opens, Masha rushes into the room, and with a loud shriek throws herself upon my neck. Her presence restored to me all my courage.

“ ‘My dear,’ said I to her, ‘don’t you see we are joking? How frightened you are! Go and drink a glass of water and then come back to us. I will introduce you to an old friend and comrade.’

“ ‘Tell me, is my husband speaking the truth?’ said she, turning to the terrible Silvio. ‘Is it true that you are only joking?’

Do we want laurels for ourselves most, / Or most that no one else shall have any?

“ ‘He is always joking,’ replied Silvio. ‘Once he gave me a slap in the face in a joke, on another occasion he sent a bullet through my cap in a joke, and just now, when he fired at me, it was all in a joke. And now I feel inclined for a joke.’

“With these words he raised his pistol to take aim at me—right before her! Masha threw herself at his feet.

“ ‘I will not,’ replied Silvio. ‘I am satisfied. I have seen your confusion, your alarm. I forced you to fire at me. That is sufficient. You will remember me. I leave you to your conscience.’

“Then he turned to go, but pausing in the doorway and looking at the picture that my shot had passed through, he fired at it almost without taking aim and disappeared. My wife had fainted away; the servants did not venture to stop him; the mere look of him filled them with terror. He went out upon the steps, called his coachman, and drove off before I could recover myself.”

The count was silent. In this way I learned the end of the story, whose beginning had once made such a deep impression upon me. The hero of it I never saw again. It is said that Silvio commanded a detachment of Hetairists during the revolt under Alexander Ypsilantis, and that he was killed in the battle of Skoulana.

From “The Shot.” Considered the founder of modern Russian literature, Pushkin survived many duels unscathed—and based this short story, first published in 1831, on a personal experience—but ultimately died in a duel with an Alsatian military officer in 1837. “Pushkin wounded his loathed adversary,” wrote the critic George Steiner of that final confrontation, “but the latter’s bullet entered Pushkin’s abdomen. The poet died two days later in unendurable pain.”