A holy saint was once vouchsafed a vision of hell. It seemed to him that he stood in the midst of a great hall, dark and silent save for the ticking of a great clock.

The ticking went on unceasingly; and it seemed to this saint that the sound of the ticking was the ceaseless repetition of the words: ever, never; ever, never. Ever to be in hell, never to be in heaven; ever to be shut off from the presence of God, never to enjoy the beatific vision; ever to be eaten with flames, gnawed by vermin, goaded with burning spikes, never to be free from those pains; ever to have the conscience upbraid one, the memory enrage, the mind filled with darkness and despair, never to escape; ever to curse and revile the foul demons who gloat fiendishly over the misery of their dupes, never to behold the shining raiment of the blessed spirits; ever to cry out of the abyss of fire to God for an instant, a single instant, of respite from such awful agony, never to receive, even for an instant, God’s pardon; ever to suffer, never to enjoy; ever to be damned, never to be saved; ever, never; ever, never. Oh, what a dreadful punishment! An eternity of endless agony, of endless bodily and spiritual torment, without one ray of hope, without one moment of cessation, of agony limitless in intensity, of torment infinitely varied, of torture that sustains eternally that which it eternally devours, of anguish that everlastingly preys upon the spirit while it racks the flesh, an eternity, every instant of which is itself an eternity of woe. Such is the terrible punishment decreed for those who die in mortal sin by an almighty and a just God.

—Yes, a just God! Men, reasoning always as men, are astonished that God should mete out an everlasting and infinite punishment in the fires of hell for a single grievous sin. They reason thus because, blinded by the gross illusion of the flesh and the darkness of human understanding, they are unable to comprehend the hideous malice of mortal sin. They reason thus because they are unable to comprehend that even venial sin is of such a foul and hideous nature that even if the omnipotent Creator could end all the evil and misery in the world—the wars, the diseases, the robberies, the crimes, the deaths, the murders, on condition that he allowed a single venial sin to pass unpunished, a single venial sin, a lie, an angry look, a moment of willful sloth, He, the great omnipotent God could not do so because sin, be it in thought or deed, is a transgression of His law and God would not be God if He did not punish the transgressor.

—A sin, an instant of rebellious pride of the intellect, made Lucifer and a third part of the cohorts of angels fall from their glory. A sin, an instant of folly and weakness, drove Adam and Eve out of Eden and brought death and suffering into the world. To retrieve the consequences of that sin the Only Begotten Son of God came down to earth, lived and suffered and died a most painful death, hanging for three hours on the cross.

—O, my dear little brethren in Christ Jesus, will we then offend that good Redeemer and provoke His anger? Will we trample again upon that torn and mangled corpse? Will we spit upon that face so full of sorrow and love? Will we, too, like the cruel Jews and the brutal soldiers, mock that gentle and compassionate Savior who trod alone for our sake the awful winepress of sorrow? Every word of sin is a wound in His tender side. Every sinful act is a thorn piercing His head. Every impure thought, deliberately yielded to, is a keen lance transfixing that sacred and loving heart. No, no. It is impossible for any human being to do that which offends so deeply the divine Majesty, that which is punished by an eternity of agony, that which crucifies again the Son of God and makes a mockery of Him. 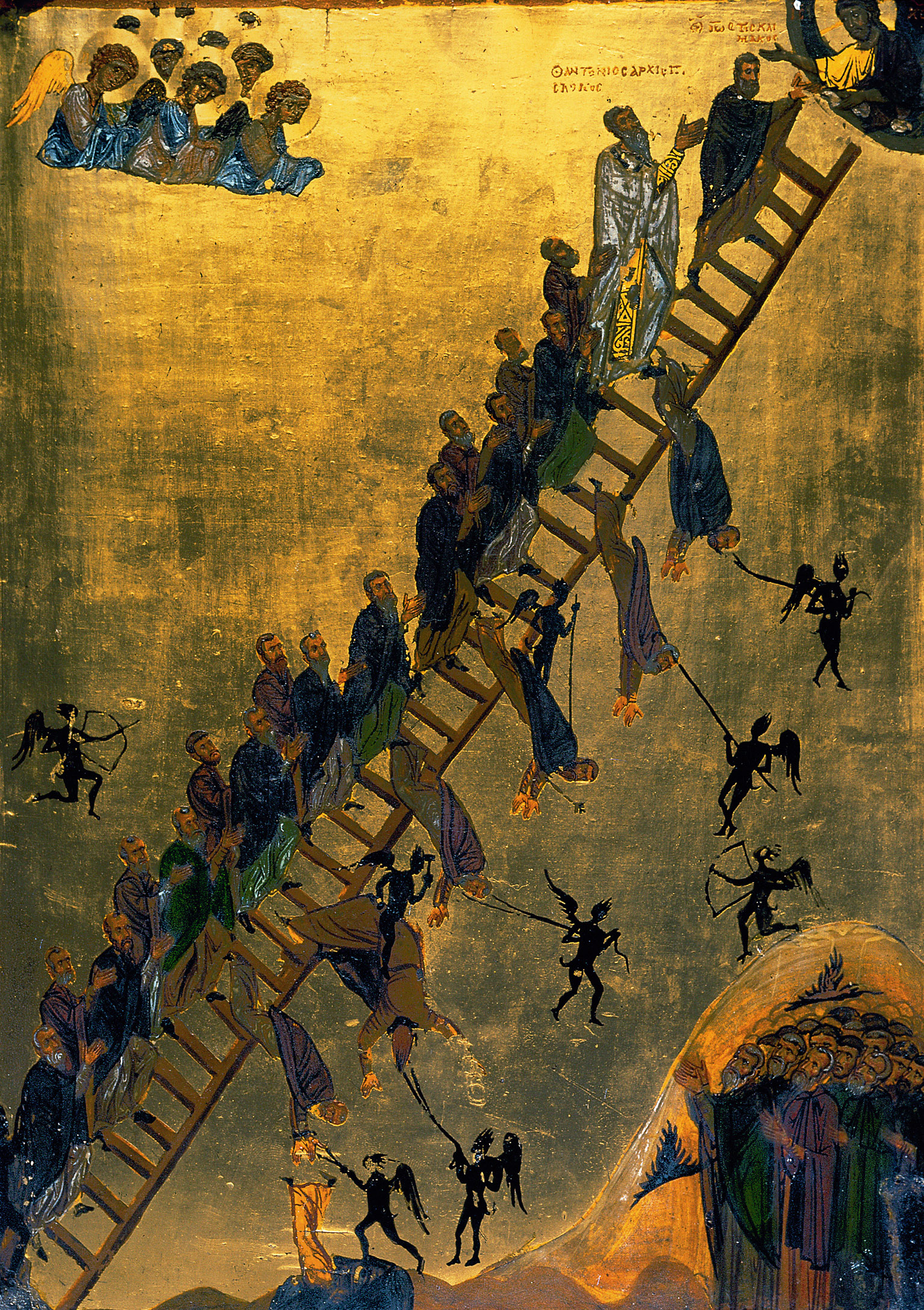 Monks climbing to heaven or being pulled to hell, twelfth-century illustration of The Ladder of Divine Ascent, a seventh-century guide to ascetic and mystical living, by St. John Climacus. Saint Catherine's Monastery, Mount Sinai, Egypt.

—I pray to God that my poor words may have availed today to confirm in holiness those who are in a state of grace, to strengthen the wavering, to lead back to the state of grace the poor soul that has strayed if any such be among you. I pray to God, and do you pray with me, that we may repent of our sins. I will ask you now, all of you, to repeat after me the act of contrition, kneeling here in this humble chapel in the presence of God. He is there in the tabernacle burning with love for mankind, ready to comfort the afflicted. Be not afraid. No matter how many or how foul the sins, if only you repent of them they will be forgiven you. Let no worldly shame hold you back. God is still the merciful Lord who wishes not the eternal death of the sinner but rather that he be converted and live.

—He calls you to Him. You are His. He made you out of nothing. He loved you as only a God can love. His arms are open to receive you even though you have sinned against Him. Come to Him, poor sinner, poor vain and erring sinner. Now is the acceptable time. Now is the hour.

The priest rose and turning toward the altar knelt upon the step before the tabernacle in the fallen gloom. He waited till all in the chapel had knelt and every least noise was still. Then, raising his head, he repeated the act of contrition, phrase by phrase, with fervor. The boys answered him phrase by phrase.

From A Portrait of the Artist as a Young Man. In 1904 Joyce halted work on a lengthy novel, Stephen Hero, to write the stories later collected in Dubliners—three of which appeared under the pseudonym “Stephen Dedalus.” He later adapted his semi-autobiographical novel into A Portrait of the Artist, casting Stephen Dedalus as its protagonist. Joyce published Ulysses in 1922 and Finnegans Wake in 1939.