To the members of the legislature of the state of Georgia:

Friends and brothers—We, the chiefs of the Creek nation, who have sold to the United States a part of the country, and intend shortly to remove to a new country, have thought it our duty to lay before you this our last and farewell address.

Friends and brothers—We believe you and your state have always been our true friends; ever since we took hold of one another’s hands in friendship, we have been as neighbors inhabiting the same country; a country which the Great Spirit made to be the home and habitation of his children. The red and white men are all from the same father, and each of them is entitled to a share in this world of the works of his hands, and of the good things he has made for the use of men. The country which you now possess, and that which we now remain on, was by the Great Spirit originally given to his red children. Our brothers, the white men, visited us when we were like the trees of the forest. Our forefathers smoked the pipe of peace and friendship with the forefathers of the white man; and when the white man said we wish to live with the red man, and inhabit the same country, we received their presents, and said, welcome; we will give you land for yourselves and for your children. We took the white man by the hand, and held fast to it. We became neighbors, and the children of the white man grew up, and the children of the red man grew up in the same country, and we were brothers. The white men became numerous as the trees of the forest, and the red men became like the buffalo. 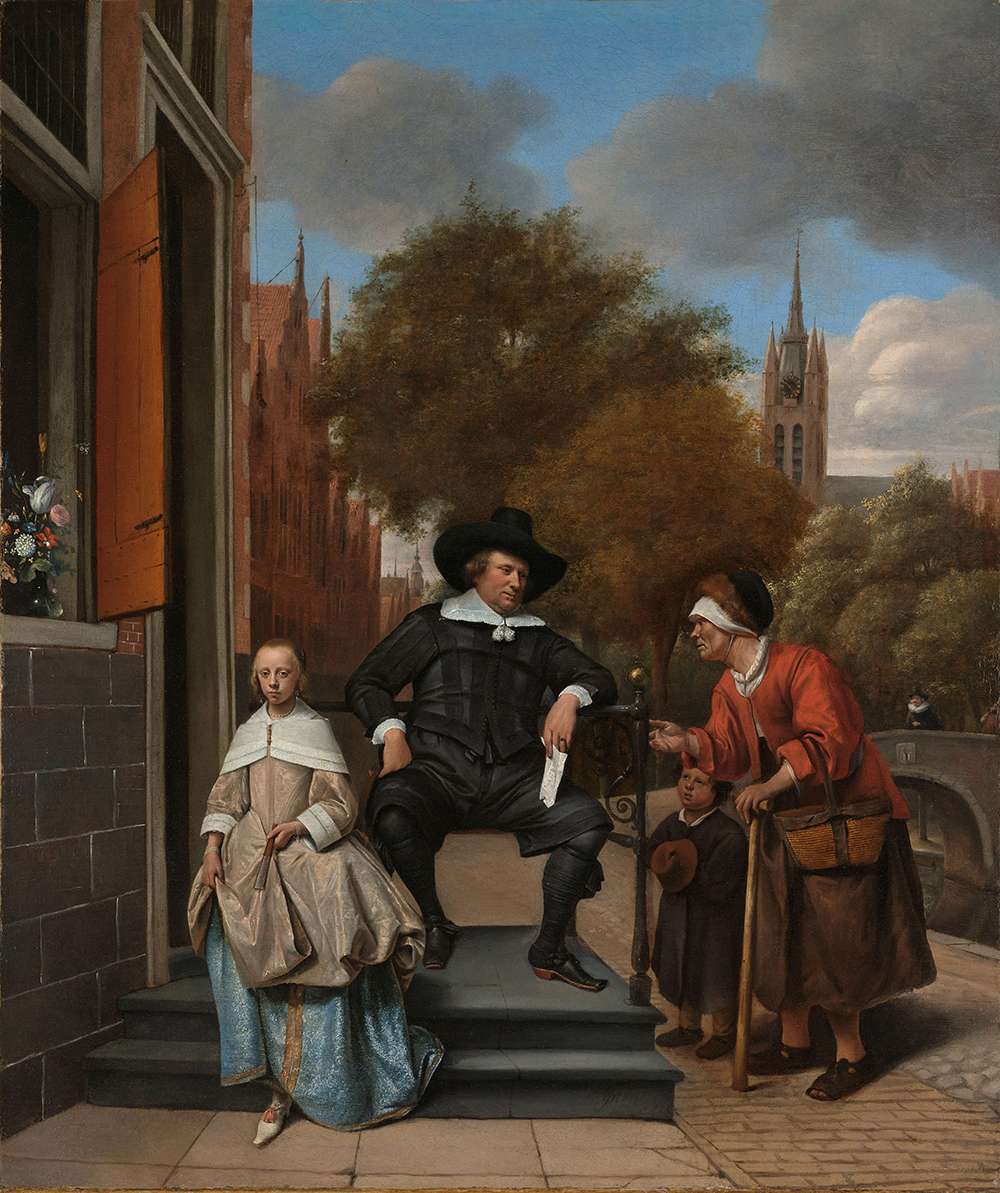 The Burgomaster of Delft and His Daughter, by Jan Havicksz Steen, 1655. Rijksmuseum.

Friends and brothers—You are like the mighty storm; we are like the tender and bending tree: we must bow before you; you have torn us up by the roots, but still you are our brothers and friends. You have promised to replant us in a better soil, and to watch over us and nurse us.

Friends and brothers—The day is come when we surrender the country of our forefathers—the land of our nativity, our homes, the places of our youthful diversions. We surrender it to our brothers and friends, and our hearts are glad that we were not forced to do so by our enemies. We go; our people will seek new lands; our hearts remain with you.

Friends and brothers—Our nation has always met the talks of our great father the president of the United States; when his agents and commissioners told us he wanted land for his people, we have always been willing to divide with them, and share our country to them.

Friends and brothers—We are satisfied that our claim to the land of our fathers was before all others. The Great Spirit placed us upon it, and gave it to us as our inheritance; but our neighbors and friends, the people of Georgia, wanted more land; their children are growing up like young trees of the forest, and they must have support.

Friends and brothers—All the comforts we now enjoy we abandon for your sakes. Our wives and helpless children must experience fatigue, hunger, cold, and every other incident that must unavoidably attend us in our travel from this, our late beloved country, to the vast wilderness, full of dangers that we probably do not foresee; but we put our trust in the Great Spirit, and in our father the president, for protection and aid.

Friends and brothers—In all the treaties with the United States for land for your use, we have never asked of your state to grant our nation presents of any description. We now, for the first time, as we are about to take our final leave of you, have thought to introduce ourselves to your notice; and hope that the first and last request of a people, long your neighbors and friends, will not be passed unnoticed by the people of the great and powerful state of Georgia, always professing toward us the greatest friendship and brotherhood.

Friends and brothers—To you, as the representatives of our old neighbors and friends, as the children of the Great Spirit, and as our common relations, managing the affairs of the great state of Georgia, we appeal, in terms of friendship, for such aid and assistance as the pleasure of your assembly, in behalf of your people, may think proper to afford us, previous to our final departure from you. The difficulties, wants, and distresses which await us in our removal in a body of ten thousand of our people, consisting of men, women, and children, must be our apology for introducing ourselves to the consideration of your humanity, charity, and benevolence.

Do good by stealth, and blush to find it fame.

Friends and brothers—In behalf of our people, we desire of you, if it may meet with your good pleasure and liberality, to make our nation, or such part as determine to remove, such a donation, in presents of any kind, as the character and dignity of your state may warrant, and the wants, distresses, and long attachment of our people to you may deserve.

Friends and brothers—If, after you hear our request and consider of it, you should think that we are not entitled to your consideration, generosity, or liberality, and that as we are about to leave you forever, and that you now have a legal claim and right to our late country, and that you owe us nothing, still we will remain strong in our former friendship to you. We do not ask of you anything as a matter of right, or of any legal claim we have on you; but merely desire to recommend ourselves to your generosity and charity.

Friends and brothers—We finally assure you that our attachment toward our old friends and neighbors shall never cease, and that we will carry with us the feelings of true and devoted friendship toward the state of Georgia, to the United States, and to the legislature of Georgia. If we should be so happy as to experience any token of their regard, we will teach our children to remember it with gratitude, and cause it to be handed down to the succeeding generations of our nation, that they may forever know that Georgia was their friend in the hour of distress.

From a letter to the Georgia legislature. McIntosh, a Creek Indian chief born to a Scottish-American father and a Creek mother, owned a plantation and allied with Andrew Jackson during a Creek civil war. He signed treaties in 1821 and 1825 that sold his nation’s lands to the United States. The Creek National Council considered these traitorous and sentenced McIntosh to death: eighteen days after signing this letter, a force of Creek warriors called the Law Menders set fire to his house, stabbed him in the heart, and shot him in the head more than fifty times.