I must steal half a moment from my work to say how glad I am to have your book, and how highly I value it, both for its own sake and as a remembrancer of an affectionate friendship that has subsisted between us for nine years without a break, and without a single act of violence that I can call to mind. I suppose there is nothing like it in heaven, and not likely to be until we get there and show off. I often think of it with longing, and how they’ll say, “There they come—sit down in front!” I am practicing with a tin halo. You do the same.

Oh, dear me, how unspeakably funny and owlishly idiotic and grotesque was that “plagiarism” farce! As if there was much of anything in any human utterance, oral or written, except plagiarism! The kernel, the soul—let us go further and say the substance, the bulk, the actual and valuable material of all human utterances—is plagiarism. For substantially all ideas are secondhand, consciously and unconsciously drawn from a million outside sources, and daily used by the garnerer with a pride and satisfaction born of the superstition that he originated them; whereas there is not a rag of originality about them anywhere except the little discoloration they get from his mental and moral caliber and his temperament, and which is revealed in characteristics of phrasing. When a great orator makes a great speech, you are listening to ten centuries and ten thousand men—but we call it his speech, and really some exceedingly small portion of it is his. But not enough to signify. It is merely a Waterloo. It is Wellington’s battle, in some degree, and we call it his; but there are others that contributed. It takes a thousand men to invent a telegraph, or a steam engine, or a phonograph, or a photograph, or a telephone, or any other important thing—and the last man gets the credit, and we forget the others. He added his little mite—that is all he did. These object lessons should teach us that ninety-nine parts of all things that proceed from the intellect are plagiarisms, pure and simple; and the lesson ought to make us modest. But nothing can do that.

Then why don’t we unwittingly reproduce the phrasing of a story, as well as the story itself? It can hardly happen—to the extent of fifty words except in the case of a child: its memory tablet is not lumbered with impressions, and the actual language can have graving room there and preserve the language a year or two, but a grown person’s memory tablet is a palimpsest, with hardly a bare space upon which to engrave a phrase. It must be a very rare thing that a whole page gets so sharply printed upon a man’s mind, by a single reading, that it will stay long enough to turn up some time or other and be mistaken by him for his own. No doubt we are constantly littering our literature with disconnected sentences borrowed from books at some unremembered time and now imagined to be our own, but that is about the most we can do. In 1866 I read Dr. Holmes’ poems, in the Sandwich Islands. A year and a half later, I stole his dictation, without knowing it, and used it to dedicate my Innocents Abroad with. Then years afterward I was talking with Dr. Holmes about it. He was not an ignorant ass—no, not he: he was not a collection of decayed human turnips, like your “Plagiarism Court”; and so when I said, “I know now where I stole it, but whom did you steal it from,” he said, “I don’t remember. I only know I stole it from somebody, because I have never originated anything altogether myself, nor met anybody who had.”

To think of those solemn donkeys breaking a little child’s heart with their ignorant rubbish about plagiarism! I couldn’t sleep for blaspheming about it last night. Why, their whole lives, their whole histories, all their learning, all their thoughts, all their opinions, were one solid ruck of plagiarism, and they didn’t know it and never suspected it. A gang of dull and hoary pirates piously setting themselves the task of disciplining and purifying a kitten that they think they’ve caught filching a chop! Oh, dam—

But you finish it, dear, I am running short of vocabulary today.

Every lovingly your friend,

From a letter to Helen Keller. “I met Mark Twain,” the deaf and blind author wrote in 1958, “when I was fourteen years old, and from that day until his death we were friends.” Keller had been accused—and later acquitted—of plagiarism when she was twelve, a fact Twain learned from reading her autobiography. Seven months after sending this letter, Twain set sail for Italy with his family, hoping the warm climate would improve his wife’s ill health. Staying at a villa in Florence, he continued work on his own autobiography, his mood increasingly gloomy, until his wife’s death from heart failure in June 1904. 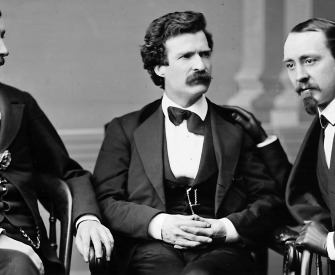