All events, even those that on account of their insignificance do not seem to follow the great laws of nature, are a result of it just as necessarily as the revolutions of the sun. In ignorance of the ties that unite such events to the entire system of the universe, they have been made to depend on final causes or on hazard, according as they occur and are repeated with regularity, or appear without regard to order, but these imaginary causes have gradually receded with the widening bounds of knowledge and disappear entirely before sound philosophy, which sees in them only the expression of our ignorance of the true causes.

Present events are connected with preceding ones by a tie based on the evident principle that a thing cannot occur without a cause that produces it. This axiom, known by the name of the principle of sufficient reason, extends even to actions that are considered indifferent; the freest will is unable, without a determinative motive, to give them birth. If we assume two positions with exactly similar circumstances and find that the will is active in one and inactive in the other, we say its choice is an effect without a cause. It is then, says Leibniz, the blind chance of the Epicureans. The contrary opinion is an illusion of the mind, which, losing sight of the evasive reasons of the choice of the will in indifferent things, believes choice is determined of itself and without motives.

We ought then to regard the present state of the universe as the effect of its anterior state and the cause of the one that is to follow. Given for one instant an intelligence that could comprehend all the forces by which nature is animated and the respective situation of the beings who compose it—an intelligence sufficiently vast to submit this data to analysis—it would embrace in the same formula the movements of the greatest bodies of the universe and those of the lightest atom. For it, nothing would be uncertain and the future, as the past, would be present in its eyes. The human mind offers, in the perfection that it has been able to give to astronomy, a feeble idea of this intelligence. Its discoveries in mechanics and geometry, added to that of universal gravity, have enabled it to comprehend in the same analytic expressions the past and future states of the system of the world. Applying the same method to some other objects of its knowledge, it has succeeded in referring to general laws observed phenomena and in foreseeing those that given circumstances ought to produce. 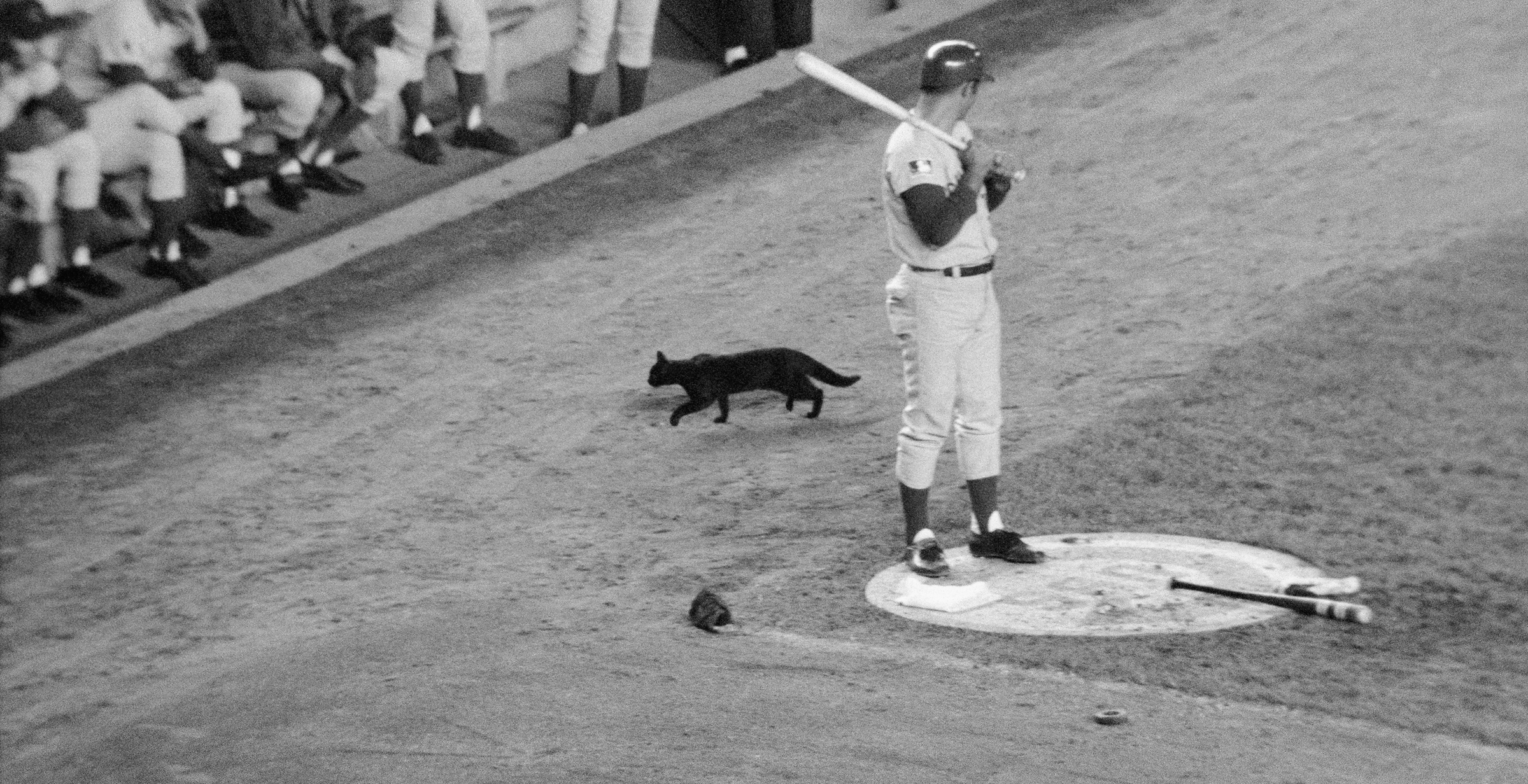 Black cat crossing the path of Chicago Cubs third baseman Ron Santo during a game against the New York Mets, Shea Stadium, Queens, 1969. The Cubs lost the game and later the pennant, despite having had a nine-game lead earlier in the season. Bettmann / Contributor / Getty Images.

Let us recall that formerly, and at no great epoch, an unusual rain or an extreme drought, a comet having in train a very long tail, the eclipses, the aurora borealis, and in general all the unusual phenomena, were regarded as so many signs of celestial wrath. Heaven was invoked in order to avert their baneful influence. No one prayed to have the planets and the sun arrested in their courses: observation had soon made apparent the futility of such prayers. But as these phenomena, occurring and disappearing at long intervals, seemed to oppose the order of nature, it was supposed that heaven, irritated by the crimes of the earth, had created them to announce its vengeance. Thus the long tail of the comet of 1456 spread terror through Europe, already thrown into consternation by the rapid successes of the Turks, who had just overthrown the Lower Empire. This star after four revolutions has excited among us a very different interest. The knowledge of the laws of the system of the world acquired in the interval had dissipated the fears begotten by the ignorance of the true relationship of man to the universe. Halley, having recognized the identity of this comet with those of the years 1531, 1607, and 1682, announced its next return for the end of the year 1758 or the beginning of the year 1759. The learned world awaited with impatience this return that was to confirm one of the greatest discoveries made in the sciences and fulfill the prediction of Seneca when he said of the revolutions of those stars that fall from an enormous height, “The day will come when, by study pursued through several ages, the things now concealed will appear with evidence, and posterity will be astonished that truths so clear had escaped us.” Alexis-Claude Clairaut then undertook to submit to analysis the perturbations that the comet had experienced by the action of the two great planets, Jupiter and Saturn. After immense calculations, he fixed its next passage at the perihelion toward the beginning of April 1759, which was actually verified by observation. The regularity that astronomy shows us in the movements of the comets doubtless exists also in all phenomena.

Probability is relative, in part to this ignorance, in part to our knowledge. We know that of three or a greater number of events, a single one ought to occur, but nothing induces us to believe that one of them will occur rather than the others. In this state of indecision, it is impossible for us to announce their occurrence with certainty. It is, however, probable that one of these events, chosen at will, will not occur because we see several cases equally possible that exclude its occurrence, while only a single one favors it.

The theory of chance consists in reducing all events of the same kind to a certain number of cases equally possible, that is to say, to such as we may be equally undecided about in regard to their existence, and in determining the number of cases favorable to the event whose probability is sought. The ratio of this number to that of all the cases possible is the measure of this probability, which is thus simply a fraction whose numerator is the number of favorable cases and whose denominator is the number of all the cases possible.

When the abbot throws the dice, the whole convent will play.

It is to the influence of the opinion of those whom the multitude judges best informed and to whom it has been accustomed to give its confidence in regard to the most important matters of life that the propagation of those errors is due that in times of ignorance have covered the face of the earth. Magic and astrology offer us two great examples. These errors inculcated in infancy, adopted without examination, and having for a basis only universal credence, have maintained themselves during a very long time. But at last the progress of science has destroyed them in the minds of enlightened men, whose opinion consequently has caused them to disappear even among the common people, through the power of imitation and habit that had so generally spread them abroad. This power, the richest resource of the moral world, establishes and conserves in a whole nation ideas entirely contrary to those it upholds elsewhere with the same authority.

From A Philosophical Essay on Probabilities. This work—which grew out of a lecture the French mathematician gave in 1795—outlines a philosophical articulation of causal determinism, often now referred to as “Laplace’s demon.” For Laplace, the symbol of nature was the clock. His classical view of mechanics prevailed until the 1850s, when physicist William Thomson claimed there was in nature a universal tendency toward the degradation of mechanical energy. The world, according to Thomson, would “run down,” and processes within a closed system are not reversible.

Every scientific struggle is a serious war.More