There is reason, it is said, in the roasting of eggs, and there is philosophy even in furniture—a philosophy nevertheless which seems to be more imperfectly understood by Americans than by any civilized nation upon the face of the earth.

In the internal decoration, if not in the external architecture, of their residences, the English are supreme. The Italians have but little sentiment beyond marbles and colors. In France meliora probant, deteriora sequuntur [approve the better, follow the worse]—the people are too much a race of gadabouts to study and maintain those household proprieties, of which indeed they have a delicate appreciation, or at least the elements of a proper sense. The Chinese, and most of the Eastern races, have a warm but inappropriate fancy. The Scotch are poor decorists. The Dutch have merely a vague idea that a curtain is not a cabbage. In Spain they are all curtains—a nation of hangmen. The Russians do not furnish. The Hottentots and Kickapoos are very well in their way—the Yankees alone are preposterous.

How this happens it is not difficult to see. We have no aristocracy of blood, and having therefore as a natural and indeed as an inevitable thing, fashioned for ourselves an aristocracy of dollars, the display of wealth has here to take the place and perform the office of the heraldic display in monarchical countries. In America, dollars being the supreme insignia of aristocracy, their display may be said, in general terms, to be the sole means of aristocratic distinction; and the populace, looking up for models, are insensibly led to confound the two entirely separate ideas of magnificence and beauty. In short, the cost of an article of furniture has, at length, come to be, with us, nearly the sole test of its merit in a decorative point of view. And this test, once established, has led the way to many analogous errors, readily traceable to the one primitive folly.

There could be scarcely anything more directly offensive to the eye of an artist than the interior of what is termed, in the United States, a well-furnished apartment. Its most usual defect is a preposterous want of keeping, observable sometimes in the character of the several pieces of furniture, but generally in their colors or modes of adaptation to use. Very often the eye is offended by their inartistic arrangement. Straight lines are too prevalent, too uninterruptedly continued, or clumsily interrupted at right angles. If curved lines occur, they are repeated into unpleasant uniformity. Undue precision spoils the appearance of many a room.

Curtains are rarely well disposed, or well chosen, in respect to the other decorations. With formal furniture, curtains are out of place, and an excessive volume of drapery of any kind is, under any circumstances, irreconcilable with good taste; the proper quantum, as well as the proper adjustment, depends upon the character of the general effect.

It’s your business when your neighbor’s wall is in flames.

Carpets are better understood of late than of ancient days, but we still very frequently err in their patterns and colors. A carpet is the soul of the apartment. From it are deduced not only the hues but the forms of all objects incumbent. A judge at common law may be an ordinary man; a good judge of a carpet must be a genius. Yet I have heard fellows discourse of carpets with the visage of a sheep in reverie—“d’un mouton qui rêve”—who should not and who could not be entrusted with the management of their own mustachios. Everyone knows that a large floor should have a covering of large figures, and a small one must have a covering of small; yet this is not all the knowledge in the world. As regards texture, the Saxony is alone admissible. Brussels is the preter-pluperfect tense of fashion, and Turkey is taste in its dying agonies. Touching pattern, a carpet should not be bedizened out like a Riccaree Indian— all red chalk, yellow ocher, and cock’s feathers. In brief, distinct grounds and vivid circular figures, of no meaning, are here median laws. The abomination of flowers, or representations of well-known objects of any kind, should never be endured within the limits of Christendom. Indeed, whether on carpets or curtains or paper hangings or ottoman coverings, all upholstery of this nature should be rigidly arabesque. Those antique floorcloths which are still seen occasionally in the dwellings of the rabble—cloths of huge, sprawling, and radiating devices, stripe-interspersed and glorious with all hues, among which no ground is intelligible—are but the wicked invention of a race of timeservers and money lovers—children of baal and worshippers of mammon—men who, to save trouble of thought and exercise of fancy, first cruelly invented the kaleidoscope, and then established a patent company to twirl it by steam.

Glare is a leading error in the philosophy of American household decoration—an error easily recognized as deduced from the perversion of taste just specified. We are violently enamored of gas and of glass. The former is totally inadmissible within doors. Its harsh and unsteady light is positively offensive. No man having both brains and eyes will use it. A mild, or what artists term a cool, light, with its consequent warm shadows, will do wonders for even an ill-furnished apartment. Never was a more lovely thought than that of the astral lamp. I mean, of course, the astral lamp proper, and do not wish to be misunderstood—the lamp of Argand with its original plain ground-glass shade and its tempered and uniform moonlight rays. The cut-glass shade is a weak invention of the enemy. The eagerness with which we have adopted it, partly on account of its flashiness but principally on account of its greater cost, is a good commentary upon the proposition with which I began. Female loveliness in especial is more than one half disenchanted beneath its evil eye. 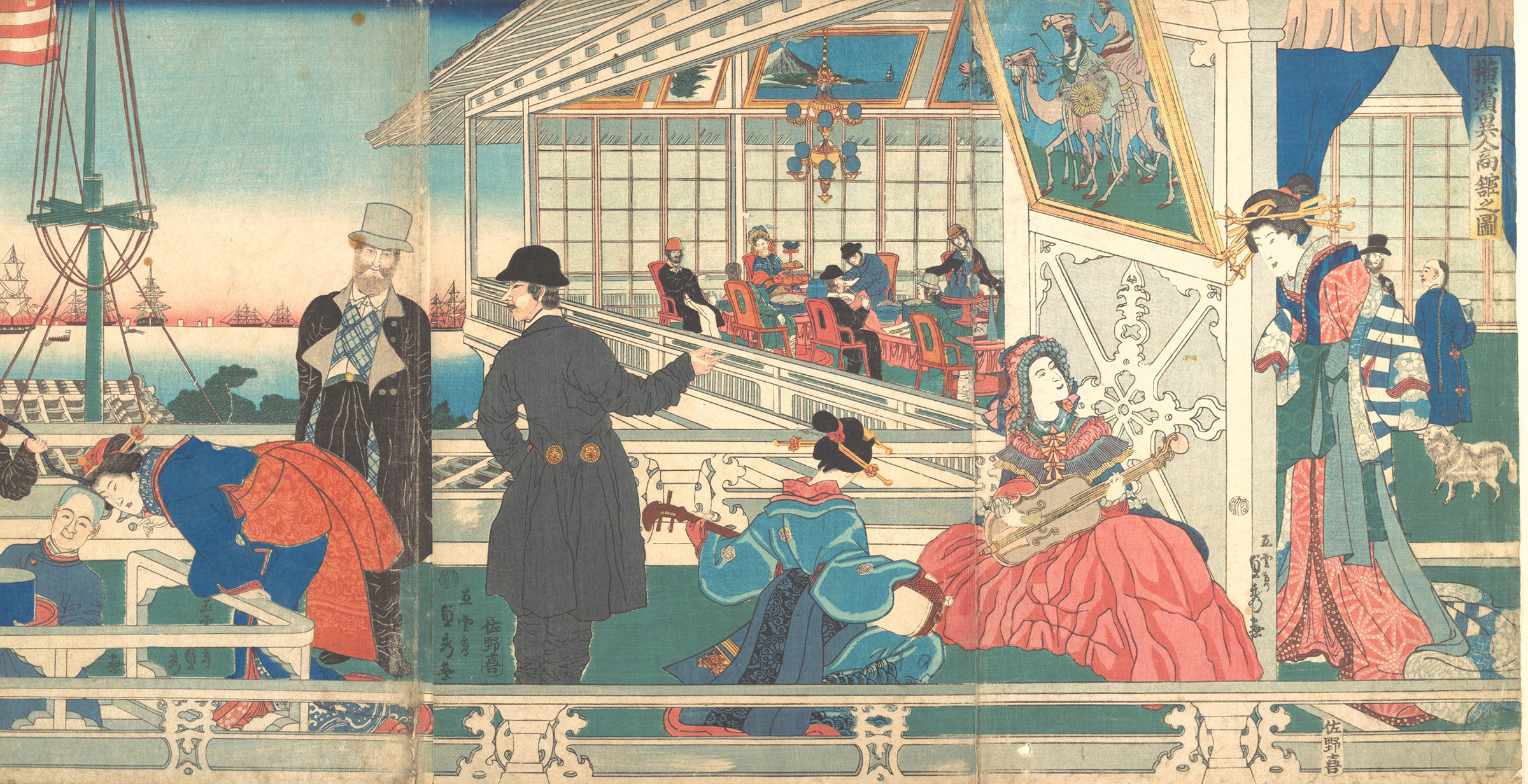 Home of Foreign Merchants in Yokohama, by Utagawa Sadahide, 1861. © The Metropolitan Museum of Art, Bequest of William S. Lieberman, 2005.

The rage for glitter has led to the exaggerated employment of mirrors. We line our dwellings with great British plates and then imagine we have done a fine thing. Now the slightest thought will be sufficient to convince anyone who has an eye at all of the ill effect of numerous looking glasses, and especially of large ones.

It is an evil growing out of our republican institutions that here a man of large purse has usually a very little soul which he keeps in it. The corruption of taste is a portion and a pendant of the dollar manufacture. As we grow rich our ideas grow rusty. It is therefore not among our aristocracy that we must look if at all, in the United States, for the spirituality of a British boudoir. But I have seen apartments in the tenure of Americans—men of exceedingly moderate means yet rara avises of good taste. Even now there is present to my mind’s eye a small and not ostentatious chamber with whose decorations no fault can be found. The proprietor lies asleep upon a sofa—the weather is cool—the time is near midnight—I will make a sketch of the room ere he awakes. It is oblong—some thirty feet in length and twenty-five in breadth—a shape affording the best opportunities for the adjustment of furniture. It has but one door, which is at one end of the parallelogram, and but two windows, which are at the other. These latter are large, reaching downward to the floor, are situated in deep recesses, and open upon an Italian veranda. Their panes are of a crimson-tinted glass, set in rosewood framings, of a kind somewhat broader than usual. They are curtained, within the recess, by a thick silver tissue, adapted to the shape of the window and hanging loosely but having no volumes. The drapery is thrown open also, or closed, by means of a thick rope of gold loosely enveloping it and resolving itself readily into a knot—no pins or other such devices are apparent. The colors of the curtains and their fringe—the tints of crimson and gold—form the character of the room and appear everywhere in profusion. The carpet, of Saxony material, is quite half an inch thick and is of the same crimson ground, relieved simply by the appearance of a gold cord (like that festooning the curtains), thrown upon it in such a manner as to form a succession of short, irregular curves, no one overlaying the other. This carpet has no border. The paper on the walls is of a glossy, silvery hue, intermingled with small arabesque devices of a fainter tint of the prevalent crimson. No mirror is visible—nor chairs. Two large sofas of rosewood and crimson silk form the only seats. An octagonal table, formed entirely of the richest gold-threaded marble, is placed near one of the sofas. Four large and gorgeous Sevres vases, in which grow a number of sweet and vivid flowers in full bloom, occupy the angles of the room. A tall and magnificent candelabra, bearing a small antique lamp with highly perfumed oil, is standing near the head of my sleeping friend. Some light and graceful hanging shelves, with golden edges and crimson silk cords with gold tassels, sustain two or three hundred magnificently bound books. Beyond these things there is no furniture, if we except an Argand lamp with a plain, crimson-tinted ground-glass shade, which depends from the lofty ceiling by a single gold chain and throws a subdued but magical radiance over all.

From “The Philosophy of Furniture.” In June 1840, a few weeks after this essay ran in Burton’s Gentleman’s Magazine, Poe sent a letter to its editor, with whom he had a tumultuous working relationship. “If by accident you have taken it into your head that I am to be insulted with impunity,” Poe wrote, “I can only assume that you are an ass.” Poe quit Burton’s that month and announced a prospectus for his own periodical, to be called The Penn. It never launched.