It is said that during the reign of King Tarquinius, a very wonderful piece of good luck came to the Roman state, conferred upon it by the favor of some god or other divinity; and this good fortune was not of short duration, but throughout the whole existence of the state it has often saved it from great calamities.

A certain woman who was not a native of the country came to the tyrant wishing to sell him nine books filled with Sibylline oracles, but when Tarquinius refused to purchase the books at the price she asked, she went away and burned three of them. And not long afterward, bringing the remaining six books, she offered to sell them for the same price. But when they thought her a fool and mocked at her for asking the same price for the smaller number of books that she had been unable to get for even the larger number, she again went away and burned half of those that were left; then, bringing the remaining three books, she asked the same amount of money for these.

Tarquinius, wondering at the woman’s purpose, sent for the augurs and, acquainting them with the matter, asked them what he should do. These, knowing by certain signs that he had rejected a god-sent blessing, and declaring it to be a great misfortune that he had not purchased all the books, directed him to pay the woman all the money she asked and to get the oracles that were left. The woman, after delivering the books and bidding him take great care of them, disappeared from among men. Tarquinius chose two men of distinction from among the citizens and, appointing two public slaves to assist them, entrusted to them the guarding of the books—and when one of these men, named Marcus Atilius, seemed to have been faithless to his trust and was informed upon by one of the public slaves, he ordered him to be sewed up in a leather bag and thrown into the sea as a parricide. Since the expulsion of the kings, the commonwealth, taking upon itself the guarding of these oracles, entrusts the care of them to persons of the greatest distinction, who hold this office for life, being exempt from military service and from all civil employments, and it assigns public slaves to assist them, in whose absence the others are not permitted to inspect the oracles. In short, there is no possession of the Romans, sacred or profane, which they guard so carefully as they do the Sibylline oracles. They consult them, by order of the senate, when the state is in the grip of party strife or some great misfortune has happened to them in war, or some important prodigies and apparitions have been seen which are difficult of interpretation, as has often happened. These oracles till the time of the Marsian War, as it was called, were kept underground in the temple of Jupiter Capitolinus in a stone chest under the guard of ten men. But when the temple was burned after the close of the one hundred and seventy-third Olympiad, either purposely, as some think, or by accident, these oracles together with all the offerings consecrated to the god were destroyed by the fire.

From Roman Antiquities. The fire occurred in 83 BC. The sybil of Cumae accompanies Aeneas down into the Underworld in Virgil’s Aeneid. As a teacher of rhetoric, Dionysius wrote studies of the orators Lysias, Demosthenes, and Isocrates, as well as the essay “On the Arrangement of Words,” one of the only surviving ancient criticism devoted to the subject of word order. Of his twenty-book history, only eleven, covering up to 441 BC, are extant. 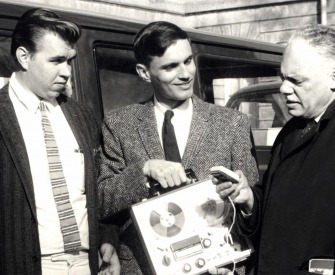